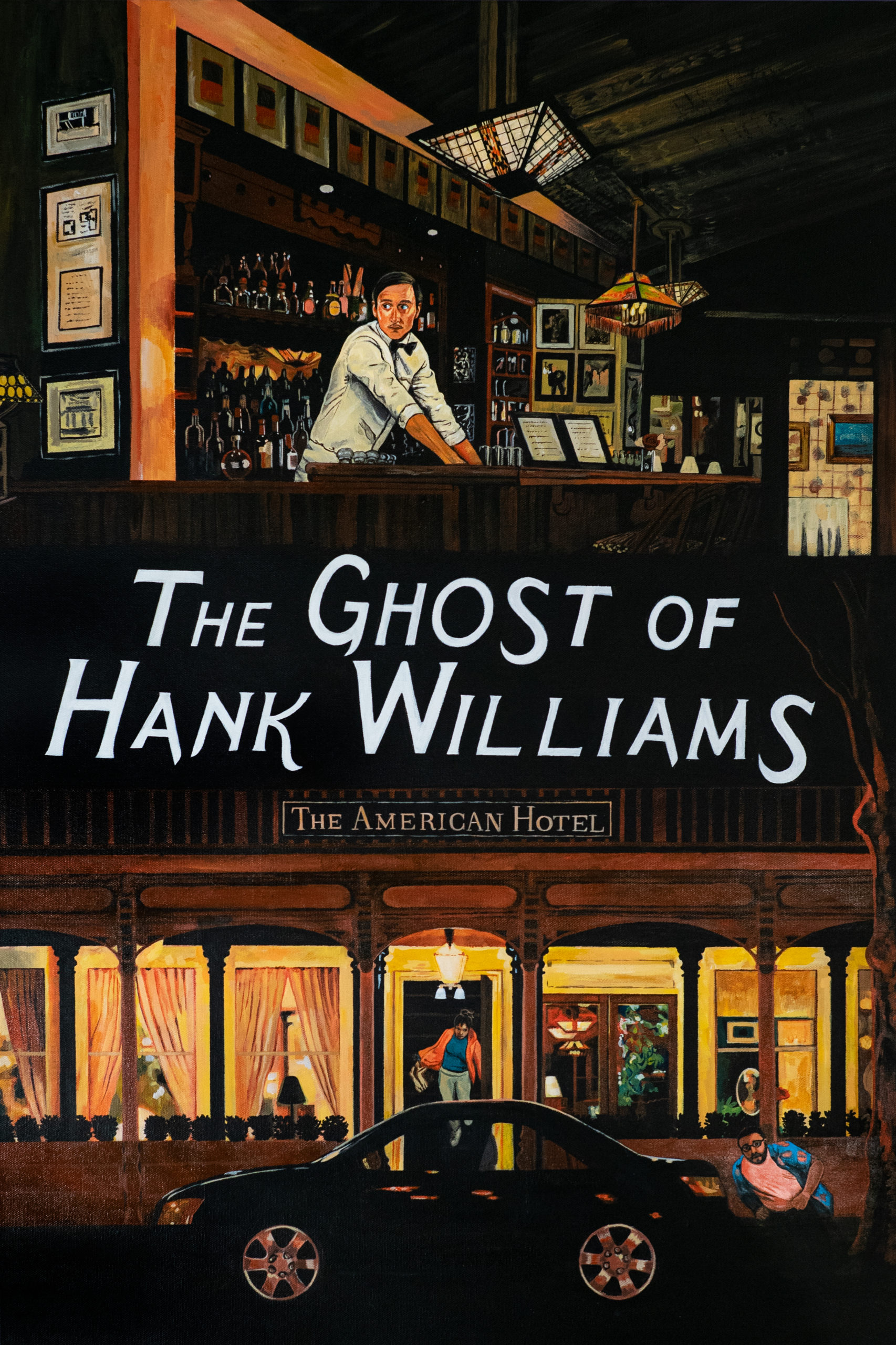 The poster for Ari Selinger's short film "The Ghost of Hank Williams" was created by the filmmaker's wife, Alexandra Shaver.

The American Hotel, a fixture of Sag Harbor’s Main Street since the mid-1800s, has its share of ghost stories. Over the years, guests, diners and employees alike have reported strange happenings and eerie presences — maybe a whaling captain who never returned from a voyage, or a troubled guest, or some other lost soul wandering through the hallways. The hotel’s spooky reputation provided creative fodder for filmmaker Ari Selinger. His short “The Ghost of Hank Williams” transposes the story of the country music star’s death to the East End haunt.

Selinger currently lives in New York City, but his family’s home base has always been Sag Harbor and he’s shot three films out on the East End.

“I love shooting out here,” Selinger said in a recent phone interview. “I love faking different parts of America by shooting in Long Island — taking it for Tennessee or something like that.”

For “The Ghost of Hank Williams,” Sag Harbor plays Oak Hill, West Virginia, where the singer-songwriter died on New Year’s Day in 1953 under mysterious circumstances. Selinger, who wrote and directed the short, had worked up a monologue about Hank Williams’s death and found inspiration for its setting while sitting at The American Hotel’s bar.

“I wanted to write a flavorful monologue coming from somebody about his death and after having gone to The American Hotel so many times and hearing Vinnie [Rom, the bartender] tell his ghost stories, I thought it would be good to tie the two together and pay homage to Sag Harbor and Hank Williams at the same time,” Selinger said.

“I [thought] it’d be cool to bring a really country guy to this whaling town,” he added.

Getting permission to shoot at the historic mainstay was not as hard as one might expect.

“One of my favorite things to do is mosey into town and get a drink at the bar, get an Old Fashioned there,” Selinger explained. “I’ve been sitting at the bar and writing little song lyrics, writing little movie ideas, and I think they picked up on me being a creative. Eventually I just asked, ‘would it be cool if I shot a movie here?’”

Selinger was put in touch with Ted Conklin, the hotel’s owner, who gave the okay.

The short film focuses on a couple who make ghost-hunting videos and whose relationship is on the rocks. They come to the hotel on a cold winter night, meet the charismatic, Hank-Williams-obsessed barkeep, and then things start to get weird. The film stars David Rysdal as the night manager and Cyndee Rivera and Ed Camacho as the ghost-hunting couple — Tara and Toby, respectively. The crew shot late at night and early in the morning over three days in March 2019, working around the hotel’s hours.

“Shooting there is kind of spooky,” Selinger related. “[It’s] really late at night, you feel like you’re hearing things. I don’t think anybody was staying there, so any sound that wasn’t coming from us was very suspicious. There was definitely a gentle presence that was making it easy for us to shoot. Having the run of The American hotel in and of itself is kind of spooky because you’re like, I shouldn’t have access to all these rooms… They’ve got these big revolutionary-era paintings of George Washington, and all the paintings feel like they’re looking at you,”

Although Selinger didn’t use a homegrown American Hotel ghost story for his short, he remembers hearing them over the years from bartender Vinnie Rom, on whom he based Rysdal’s character. In one that stuck with him, Rom was closing up late one night and headed down to the wine cellar. When he came back upstairs, a fire was blazing in the fireplace. He put it out and went home but the next morning got a call asking why he’d let it burn — the employees who’d been opening had walked in on a lit fireplace. Rom also would tell Selinger about feeling gusts of wind blowing late at night into his face.

Selinger has used Sag Harbor for inspiration before. His senior thesis film at New York University, “Moondog Airwaves,” was filmed at the former Bay Burger restaurant but set in an imaginary Moontown in 1995. It played at the old Sag Harbor Cinema before it burned down.

“I’ve always thought of Sag Harbor and especially The American Hotel, which is so iconic, as like a muse and my muse,” Selinger said. “I almost like to treat it like my make-believe moon-kissed city. You can almost imagine the stories that are happening in and around town — there’s so much history in Sag Harbor, you could just imagine any era of story happening all at once. I find it a really inspiring place to be.”

Selinger has also shot a few “Sag Harbor Stories” which will play at the Sag Harbor Cinema. One centers on Sag Harbor resident Joe Lauro’s immense record collection, and another focuses on radio station WLNG. Music is a big source of inspiration for Selinger — Hank Williams’s music is almost its own character in the short. Selinger makes music himself and performed the music for the film with his brother Eitan.

“I’m one of those guys who doesn’t know any music past 1980. I love going backwards,” Selinger said. “I think that’s really what I liked about Hank Williams. He’s such a raw — the music’s coming straight from his bones. That’s the type of music that I like, folk music that’s coming from people’s bones. I almost dare to say that I’m more inspired by music than I am film. When it comes to making a movie, I’m listening to more music than I am watching movies.”

“We were submitting, we got into a bunch, then the pandemic happened and a lot of them got canceled,” Selinger said. “But when we started going, it was really exciting. A lot of them were in New York City, so it [felt] almost like a traveling road show, just going around and showing the movie at these cinemas that I’ve always been going to, like the Chelsea cinema. It was really cool to see it in the same place that I saw ‘Parasite.’”

Hank Williams’s ghost will also be using its spectral hand to open doors for Selinger; the film and its traction have helped lead to a new project. A feature called “The End,” it will be shot in Montauk this September with Lexi Tannenholtz, who produced “The Ghost of Hank Williams,” and Conor Murphy, who was the cinematographer.

“The Ghost of Hank Williams” is available to watch on Amazon and Vimeo.