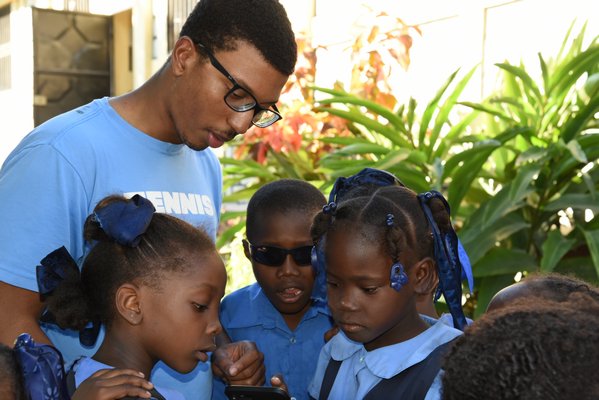 Wings Over Haiti began unexpectedly, as one artist and pilot Jonathan Glynn decided to completely change his life.

Mr. Glynn, a native of Sag Harbor, flew medical supplies to Haiti in his private plane after a devastating earthquake in 2010. Since then, he has dedicated his time and effort full-time to raising money to continue to help Haiti and its children through a nonprofit he founded that year, Wings Over Haiti.

After partnering with a Haitian-American high school guidance counselor, Shad St. Louis, and middle school teacher Melissa McMullen, the trio purchased land near Port Au Prince in 2010 to open Wings Over Haiti School to help educate Haitian youth. Now, the foundation plans to build a second school, and will host its second annual Hamptons Artists for Haiti auction to fund its future build. A groundbreaking has not been announced.

Mr. Glynn attributes the foundation’s success to Sag Harbor’s generous community, often banding together to raise money for him to complete trips back and forth to Haiti. Mr. Glynn said they are not cheap.

“I have remarkable community support, great friends, and dedicated people that have helped us not only build a very successful first school, but now we are starting a second school,” he said.

A Haitian banker from Queens, Magalie Theodore, contacted Mr. Glynn after hearing about the success of the first school and offered him 7 acres of her father’s land where a school once stood for a new school. Mr. Glynn said he accepted it graciously.

Establishing a second school has been a challenge for the foundation—yet riding in the success of the first school’s coat tails has helped raise money a little quicker, Mr. Glynn said. “It’s hard to get seed money for something that doesn’t exist, and it gets easier as they can see happier, healthier children taken from the depths of despair coming to the school.”

Mr. Glynn continues to fly to Haiti every few months to boost morale and let the communities know they haven’t been forgotten. He said the foundation will use what they’ve learned from establishing the first school to build the second school. The first facility has about 100 students, for children ready for preschool through sixth grade. They employ 21 people.

The second school will be built about six hours away from the current school and will start with about 40 students, with the eventual plan to build up to 400 students. The students are chosen through a series of interviews conducted by the foundation.

“We start small,” Mr. Glynn said. “We actually meet with parents and the children one at a time, and we watch how the parents react to a book and how a child reacts to a book.”

He said the selection process is difficult and competitive, but children who seem enthusiastic and have parents who are encouraging and engaged are top choices. Most of the children, Mr. Glynn said, have never seen a book before.

During a March trip, Mr. Glynn brought along Dambite “Ted” Morency, a senior at the Ross School in East Hampton who has raised more than $20,000 for the foundation. Mr. Morency was born in Haiti and moved to New Jersey when he was a child. He received a scholarship to go to the Ross School five years ago. He will be attending Cornell University next year, studying policy analysis and management.

“I think that he’ll end up running a school one day,” Mr. Glynn said, hoping Mr. Morency will work for him some day. “He’s dedicated to helping out where he came from and recognizing the privilege that he’s had in his life.”

Last year, an event called Hamptons Artists for Haiti, a benefit and auction featuring many local artists curated by Coco Myers, of folioeast, vice president of Wings Over Haiti Arthur Bijur and Mr. Glynn, raised more than $30,000 for the second school’s build.

Mr. Glynn said that on “a wing and prayer” the event ended up selling out last year. He said he hopes the event will generate more money for the foundation this year after cutting the percentage artists take home from sold works from 50 percent to 25 percent. More tickets for the public to attend the event will also be available. The second annual event will feature more than 40 local artists, curated again by Ms. Myers.

The Hamptons Artists for Haiti benefit and auction is from 5:30 to 8:30 p.m. on Saturday, June 30, at the Watermill Center at 39 Water Mill Towd Road in Water Mill. Tickets are $150 and can be purchased at wingsoverhaiti.net.