Art Donovan Discusses His Illuminated Sculptures At The Maidstone Hotel 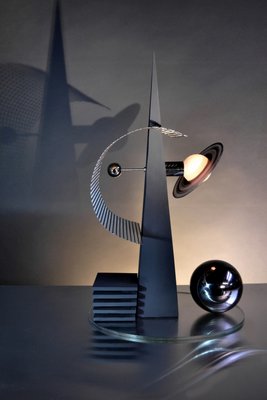 As a former senior designer for Donald Deskey Associates, NYC, Art Donovan was influenced by his extensive conversations with Mr. Deskey about the “Golden Age of American Art Deco.”

Mr. Deskey had designed Radio City Music Hall and other American masterpieces of the style. He was also a primary designer for the 1939 New York World's Fair and helped usher in Mid-Century Modern design.

Mr. Donovan’s sculptural lighting piece "1939/The Future Arrives” evokes the World’s Fair and references the iconic Trylon and Perisphere structures that were its centerpiece. Reminiscent of an architectural model, this contemporary illuminated design is part of Mr. Donovan's new handmade, sculptural collection, which, since early August, has been on view in "Odd Beauty/Interstellar,” an exhibition running through Labor Day at the Maidstone Hotel in East Hampton.

He notes that his work is inspired by science, astronomy and the timeless beauty of the ancient Middle East.

In “1939/The Future Arrives,” Saturn glows from the bulb and is complemented by precise rings that are hand painted on razor-thin Lucite,” writes Mr. Donovan in describing the piece. “The curved sail portion of the piece is pierced at the top of the Trylon and it aludes to the kinetic, futuristic sweep of an aeronautical wing.

“The geometric planes on the bottom left are an Art Deco element and render a perfectly natural extension of the original architecture itself.”