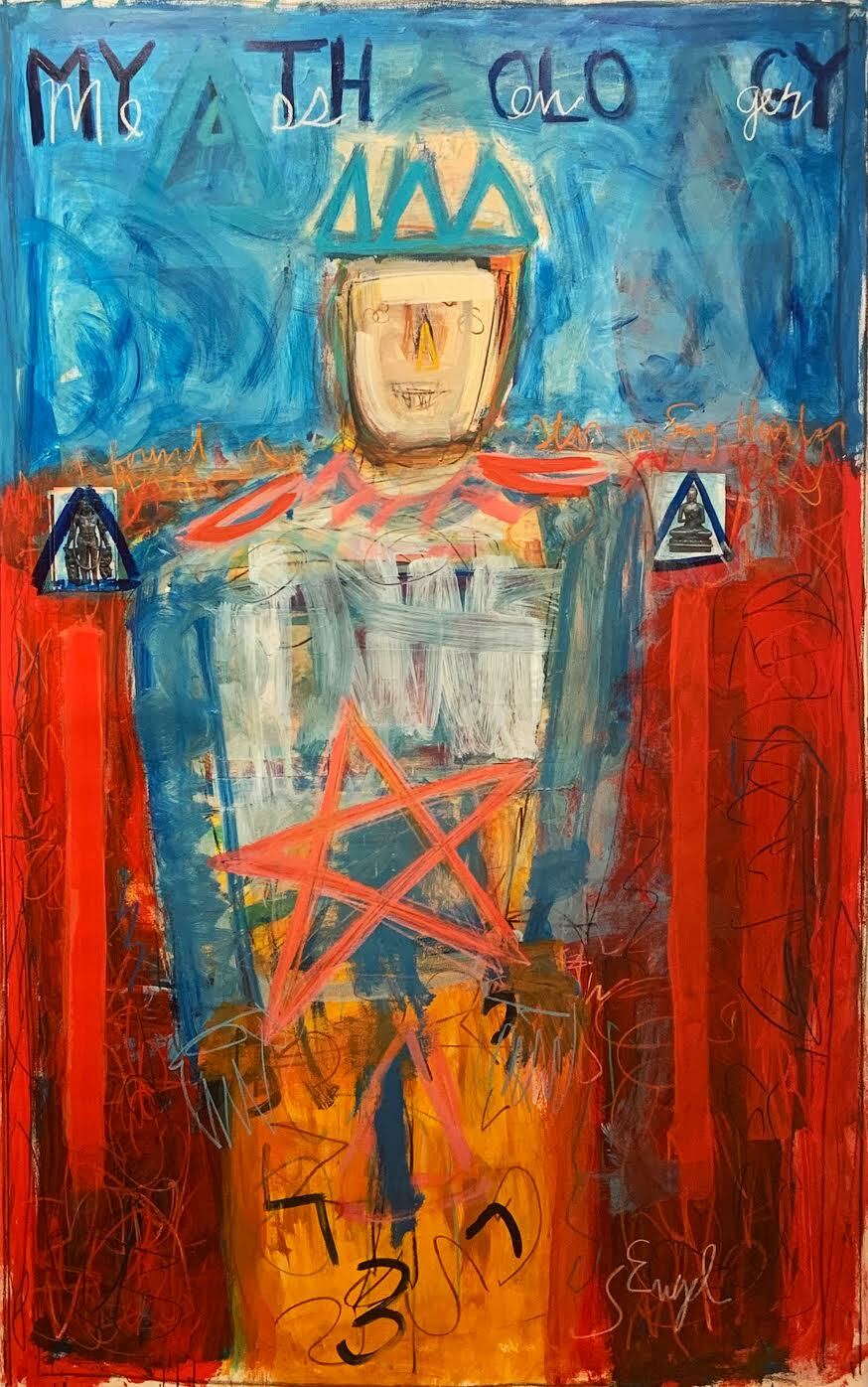 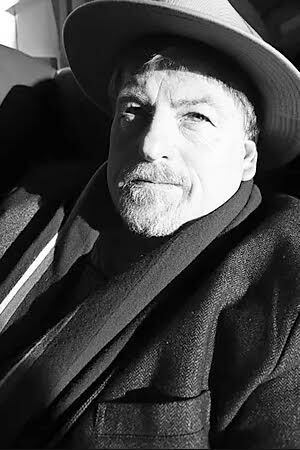 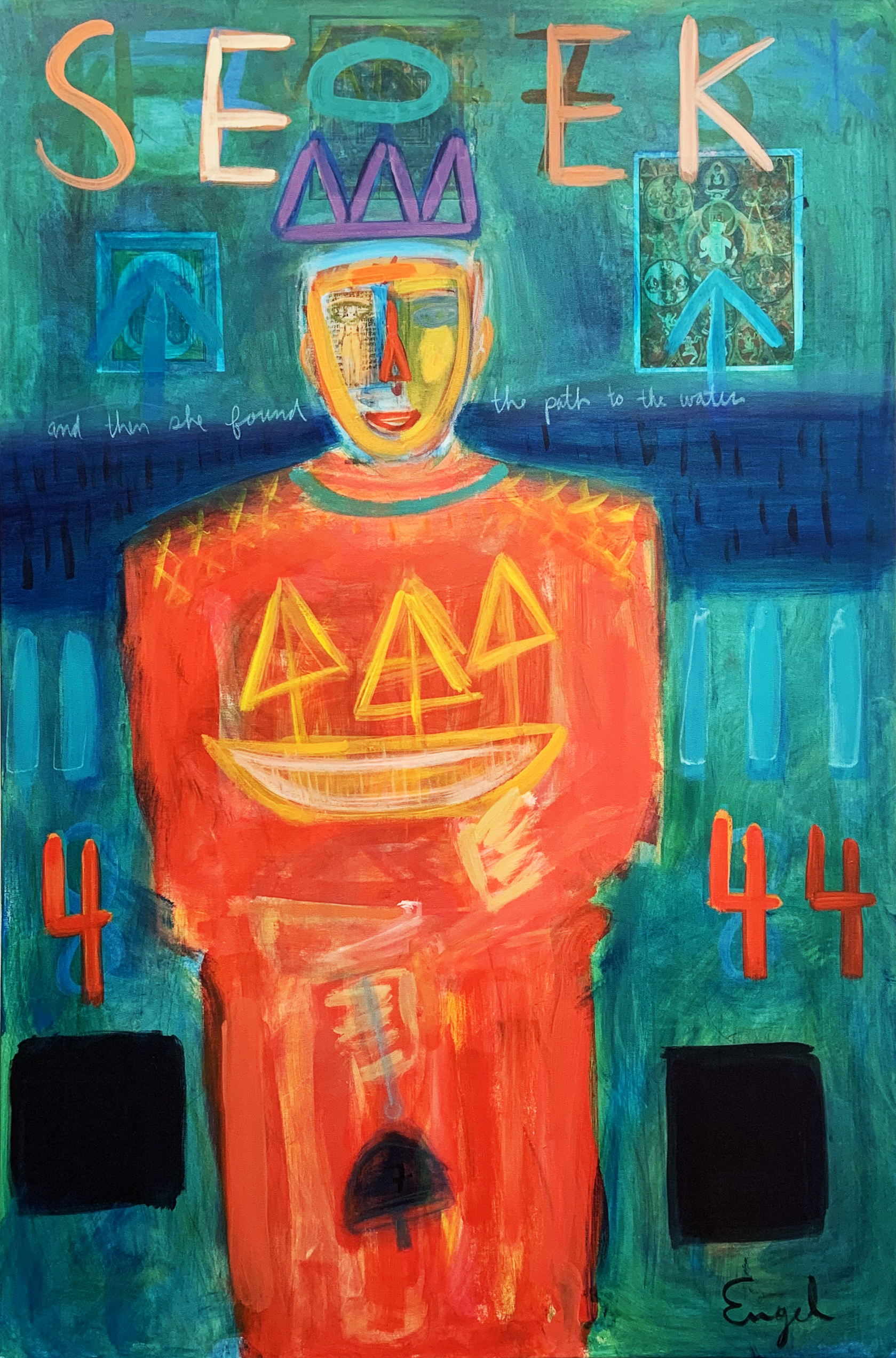 The crown. It’s a recurring symbol in Christopher Engel’s artwork and it figures prominently in “Kings,” a series of paintings by the Sag Harbor artist on view now through the end of summer in Romany Kramoris Gallery’s first-ever virtual exhibition.

The meaning of the crown as an archetype, which is essentially synonymous with the meaning of the halo, is extrapolated across Engel’s artwork, as well as in the virtual gallery’s online copy, and even in person while visiting the gallery’s conversational and devoted staff.

Elizabeth Raphael initiated the concept and design of an online gallery upon discovering unnamed and unframed works that Engel had collectively entitled “Kings,” and she redesigned the Kramoris space on Sag Harbor’s Main Street to feature his work as well as that of other gallery artists.

“I love exploring the archetypal images in Christopher Engel’s faces and figurative work with people who come into the gallery or engage virtually and online,” Raphael said. “People appreciate the resonance of Christopher’s work with that of artist Jean-Basquiat and their shared mastery of the meaning of symbols.”

Raphael notes that a young Nigerian couple recently bought one of Engel’s Kings. They shared with her that they are from the Yaruba tribe, where there is a tradition of passing a crown from one generation to the next.

“Art is a universal language that can transcend cultures and bring people together, especially in these difficult times,” she said.

Brandon Hallman, who has worked at Kramoris Gallery for 10 years, built and implemented a new website design for the gallery, collaborating with Kramoris, Engel and Raphael to extend the virtual gallery of the work through the summer.

For gallery owner Romany Kramoris, who has known and represented Engel for 12 years, there is a mystical quality to the artist and his work. She joked that they fittingly met on predestined terms.

“We met in a dream!” Kramoris said. “He had an exact dream in replica of my gallery, walked in the door the next day, never having been here, and exclaimed, ‘This was my dream last night!.’ We talked about art and philosophies, and soon thereafter he became one of my artists.”

The relationship between Kramoris and Engel has been an enduring one, and in speaking of the dominate imagery in this current body of work, Engel explained that the crown “is an acknowledgment or connection to a higher power, a higher self.

“It is a connection to spirituality. The crown can be seen as a ‘halo’ — a light emanating from inside that rises above,” he said. “None of us are alone. We are a collection of all those who have gone before us. The ‘crown’ is passed from one generation to the next. And everyone can find a crown that exists within themselves.”

The ideology surrounding the paintings in “Kings” invites viewers to celebrate “the guides that are within all of us,” according to the virtual gallery. “We are all kings and queens and royals, connected to a higher power the collective unconscious of humanity.”

In his artist’s statement, Engel reveres the philosophy of Swiss psychiatrist Carl G. Jung, whose observations about mythological archetypes and the “collective unconscious” are fundamental to the series “Kings.”

According to Jung, ancient symbols and images that derive from the collective unconscious, including the king, are instinctual and therefore synchronous across human history.

“An angel, in some religions, is called a bodhisattva,” Engel said, “and in others you call it a higher being, an energy outside that speaks to people.” Nevertheless, man universally can distinguish the holy and the divine when it presents itself, he argued.

As a result, Engel’s artwork utilizes archetypal and mythological imagery to create world-inclusive collages of various holy people and deities. The spontaneous shapes on his canvasses have a subliminal effect on viewers, the artist explained. As one looks outward and interprets Engel’s amalgam of forms, they actually look inward.

“It has a subconscious effect. It’s up to the viewer” to decide what the artwork means subjectively, in “your subconscious response to different words, numbers, colors, deities,” Engel said.

The experience of pondering his artwork, and all spiritual phenomena, is in fact Engel’s intention. For example, in his mixed media piece, “Messenger,” the primary focal point is a set of dark blue capital letters spelling out “MY-TH-OLO-GY” with large spaces in between every two to three letters. These gaps stunt a reader’s ability to piece the word together. Finally, a thin white scripted “me-ss-en-ger” overlays the former word. These two terms are enough to understand one of Engel’s core philosophical principles as an artist: where a person’s unique reading of art will separate them from other individuals — because conclusions are divisive and diverse — their process of intuition, and a person’s general impetus for analysis, are intrinsic features of humanity.

An audience member’s process of seeing “MY,” then “TH,” then “OLO,” and finally “GY” precedes any conclusion that the term readings mythology. This feature, joined by other motifs in Engel’s artwork, gives viewers the ability to linger in their contemplation, before creating a message, and becoming a messenger and a guide. This piece also has hidden writing in orange, above the figure’s shoulders, that reads “I found a star in Sag Harbor,” a nod to the place Engel calls home.

“Just like birds know to migrate, the spiritual travels within us to lead us toward enlightenment,” Engel said. “The simple thing is, look inside yourself. Acknowledge these [thoughts and feelings] are things inside of you, that can help you. Messages are all around you.”

For Engel, the word “Kings” itself also hints at the fluidity of gender referring to all mankind.

“In everybody, there is a male and female personification of self,” noted Engel whose outlook is based on Jung’s concept that an animus, the inner masculine aspect of a woman, and an anima, the inner feminine aspect of a man, transcend to personal psyche.

“Some [people] have more male overtones, [and others] have more female overtones — but as you look closely, the [idea of an inner-king] can be gender neutral,” said Engel, adding that it’s not about being divided by terms like ‘male’ or ‘female,’ and the present-day association between royalty and material wealth. Instead, the exhibition strives to demonstrate the power and prestige achieved with spirituality — and the innate spirituality that lives in mankind.

Underlying Engel’s work is the realization that we have guides and compasses within ourselves.

“I hope anyone who looks at the work finds something of themselves in it,” Engel said. “It fascinates me as a teacher, and when I teach children, I say that the fact that we are here is a testament to the trials and tribulations of our ancestors. Our ancestors worked hard for us to be here.”

“Ancestors can tell us a great deal, and can help guide us through the times we are in. Artists have always played that role in giving a mirror to our society, reflecting present and future,” he added. “That is one aspect of art: it can give us a different view of reality and can offer perspective and hope. Every generation has artists who speak in profound ways. The artists are often known as visionaries – ahead of their time.”

Southampton Police Reports For The Week Of August 11

SOUTHAMPTON VILLAGE — Responding to a call regarding two young people passed out in a car on Old Town Road on the morning of August 7, Southampton Village Police found a vehicle with damage to its front driver’s side and its front driver’s side wheel shredded. They learned the vehicle, a 2011 Chevrolet Malibu, had been stolen from an Elm Avenue, Flanders property the night before. They arrested the two inhabitants of the car — the driver, Gerson Hernandez-Castillo, 20, and his passenger Eleeam Hernandez-Espinosa, 22, both from Riverhead — on felony counts of criminal possession of stolen property in ... by Staff Writer

Southampton DWI Arrests For The Week Of August 11

Joshua Lekanides, 30, of Ridge was pulled over on Montauk Highway just before 3 a.m. on August 7, after Quogue Village Police spied him driving on three wheels. His vehicle was missing its right tire. He was charged with aggravated DWI, a misdemeanor. The charge is filed when a driver’s blood alcohol content exceeds .18; his was .25, police said. John Hamilton, 63, of Remsenburg was charged with misdemeanor DWI on August 8. Quogue Village Police pulled him over for driving without taillights and swaying within his lane on Dune Road at 2:01 a.m. Police said he failed roadside sobriety ... 10 Aug 2022 by Staff Writer

Southampton DWI Arrests For The Week Of August 4

Lucas C. Cardaci, 23, of East Quogue was charged with misdemeanor DWI on July 30 after a crash on Mill Road. Westhampton Beach Village Police said he was speeding and slammed on the brakes of his motorcycle when he saw a patrol car on the side of the road. He lost control of the bike and was ejected onto the pavement right behind the police car, police said, and he failed roadside sobriety tests and declined medical attention. Joel S. Posner, 37, of Westhampton Beach was pulled over on July 28 on Montauk Highway and charged with misdemeanor DWI. According ... by Staff Writer

Southampton Police Reports For The Week Of August 4

The search for a chief for the Southampton Village Police — the department has been ... by Cailin Riley

For more than a year, Orson and Ben Cummings, filmmakers and Southampton Village residents, have ... by Cailin Riley

Skip Norsic Gets Out Of The Truck After 53 Years: Emil Norsic & Son Sold To Winters Brothers

Emil Norsic & Son, the 90-year-old garbage collection company that had grown into a trash ... by Michael Wright

Neighbors Object To Variance Requests At Butter Lane Farm In Bridgehampton, Claim Greenhouse Is A ‘Trojan Horse’ For Housing

Who will live in the proposed structures — humans or animals? The question arose during ... by Kitty Merrill
×