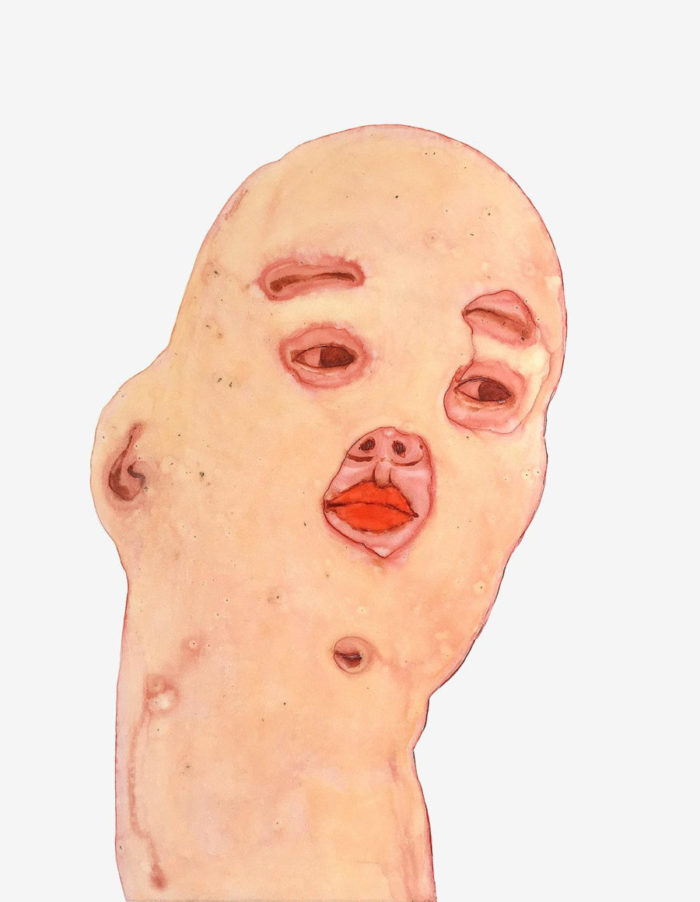 They’re deep. They’re strange and beautiful, psychological and provocative — from primitive skulls and masks to fleshy pink faces, with their lines, cuts, scars and secrets.

To Joyce Kubat, they are her “people.” And she doesn’t know where they came from.

“They always surprise me. Always, always,” the artist said from her home-studio in Huntington. “I find out by doing, and when I do, I discover things. I even get angry with myself, and I really feel a person has to push beyond that and screw things up if necessary until you recognize something that’s honest or real, and that’s how I’ve done it all along.”

In the eyes of Guild Hall in East Hampton, her method is working. Two years ago, guest juror Ruba Katrib named Kubat as the Top Honors recipient of the 79th annual Artist Members Exhibition, awarding her a solo exhibition that opened October 26 and will remain on view through December 30.

“I’m a serious artist and I know I have to be seen where serious art is. And serious art, to me, is Guild Hall and the Hamptons,” explained Kubat, who will give a gallery talk about her work on Saturday afternoon. “I don’t have a connection out there, except for the artwork. If you don’t do ordinary, you have to find someplace that’ll accept you when you don’t do ordinary — and out there, people accept me and my work.”

Even still, leading up to the opening reception last month, Kubat expressed some unease. She felt nervous and shy, she said, even though her bold work is anything but.

“It took me a long time to have the courage not only to let those drawings happen, but then to show them. I do have a shyness inside, there’s no getting around it,” she said. “I was so shy about what I did that I was uncomfortable with showing anybody. But over time, I became comfortable with it. Things percolate and even if it’s uncomfortable, let it happen. That’s what I do.”

The evolution of her people series began in 2002, shortly after her longtime art teacher was diagnosed with Alzheimer’s disease.

“I took her to class and brought her home, because she had no one to do it, until she no longer taught,” Kubat said. “Then, I was done with teachers, period. Done, absolutely done.”

Ever aware of her own mortality — “I’m not young, and I wasn’t young then!” she said — she found freedom to truly create, tapping an uncharted territory within herself. And while fellow artists in her figure drawing classes continued to interpret the models literally, she found herself doing something entirely different, unable to turn back.

Kubat clearly remembers the first time she was asked, “Where are these coming from?”

“They’re coming from me,” she had replied.

“Out of desperation,” she’d said.

“Everybody else in the class was doing ordinary, copying the model drawings, and I was doing this, because I wouldn’t do the other anymore. I refused,” Kubat said. “It was a real ‘now or never’ moment, and anybody who cared to ask me, that’s what I told them. There was no tomorrow, it’s now or never. Sink or swim. This is what resulted — and everything after resulted from it.”

Her breakthrough series “‘40’ Pastel Paintings” led to her larger “‘80’ Pastel Paintings,” horizontal works on paper that she would wet and work with compressed pastels using a nude model. The process felt intense, spontaneous, uncontrollable and sensuous, she said.

“I could not be clean or accurate, but I could wash out and put in new heads and figures as often as needed until something unexpected happened,” she said in her artist’s statement. “By this process, a world peopled with unusual characters emerged. I discovered a form of psychological realism, a commentary on the human condition and interrelationships. It’s the psychological aspect that interests me, and I believe the viewer responds to. It sucks them in and keeps them there, sometimes uncomfortably so.”

Next came Kubat’s “Little People” series in 2009, a fighting against the urge to be “correct” when facing the figure, she said, by making the heads playfully large with pink ink and the bodies small using pastel. “Single Figures” in 2011 and 2012 marked a raw new edge, followed by her most recent “Pink Inks,” small and intimate.

All this time, the work was purposefully unplanned, though it utilized the same media: heavy bodied, acrylic-based, red-earth-colored ink, and hard pastels melted in water, like a lush paint. They feel natural and allow her to play with her imagery — always poignant and often humorous, relating in some way to a certain universal humanity, she said.

“Obviously, it’s something deep inside me,” she said. “But my message, if you call it a message, I think it’s universal and not so intimate to me that no one else could feel it.”

Joyce Kubat will give a gallery talk on her solo exhibition, “My People,” on Saturday, November 16, at 2 p.m. at Guild Hall, 158 Main Street, East Hampton. The show will remain on view through December 30. For more information, call 631-324-0806 or visit guildhall.org.