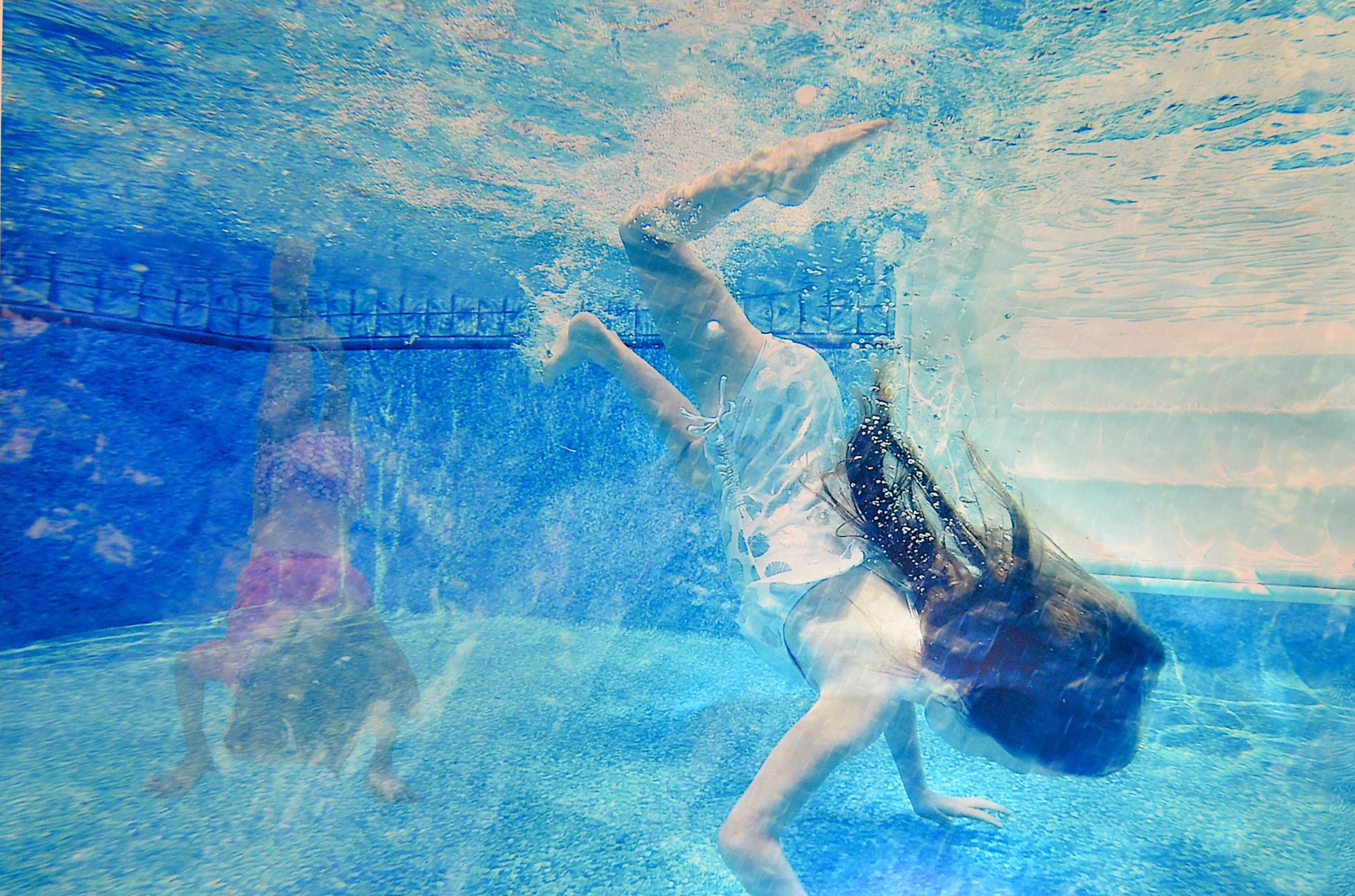 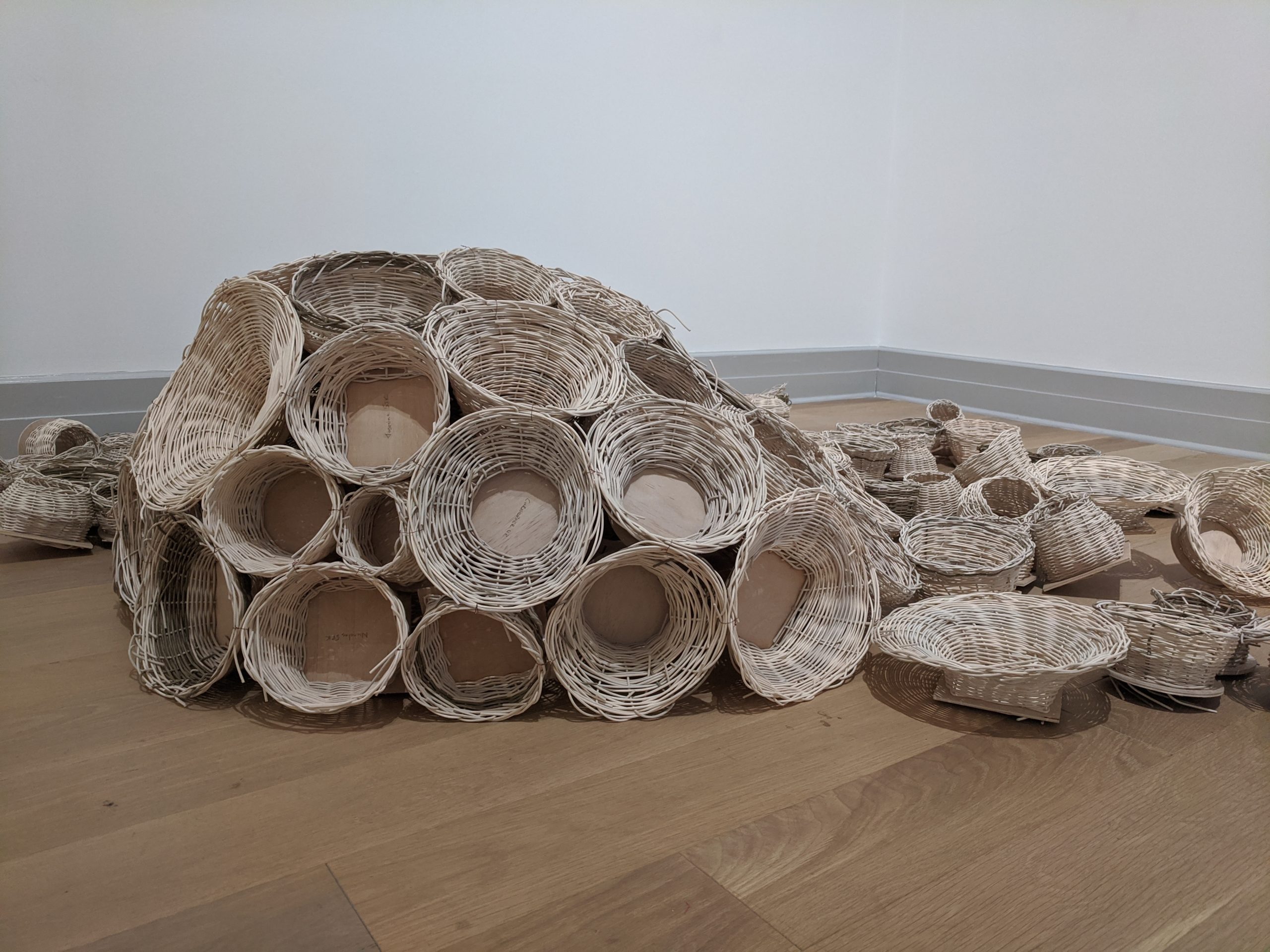 The 150 fourth and fifth graders in Gary Osborne's art classes at Sag Harbor Elementary School used the theme of water to hand-weave baskets from reeds soaked in water. The baskets are assembled in the shape of an octopus in the galleries at Guild Hall. 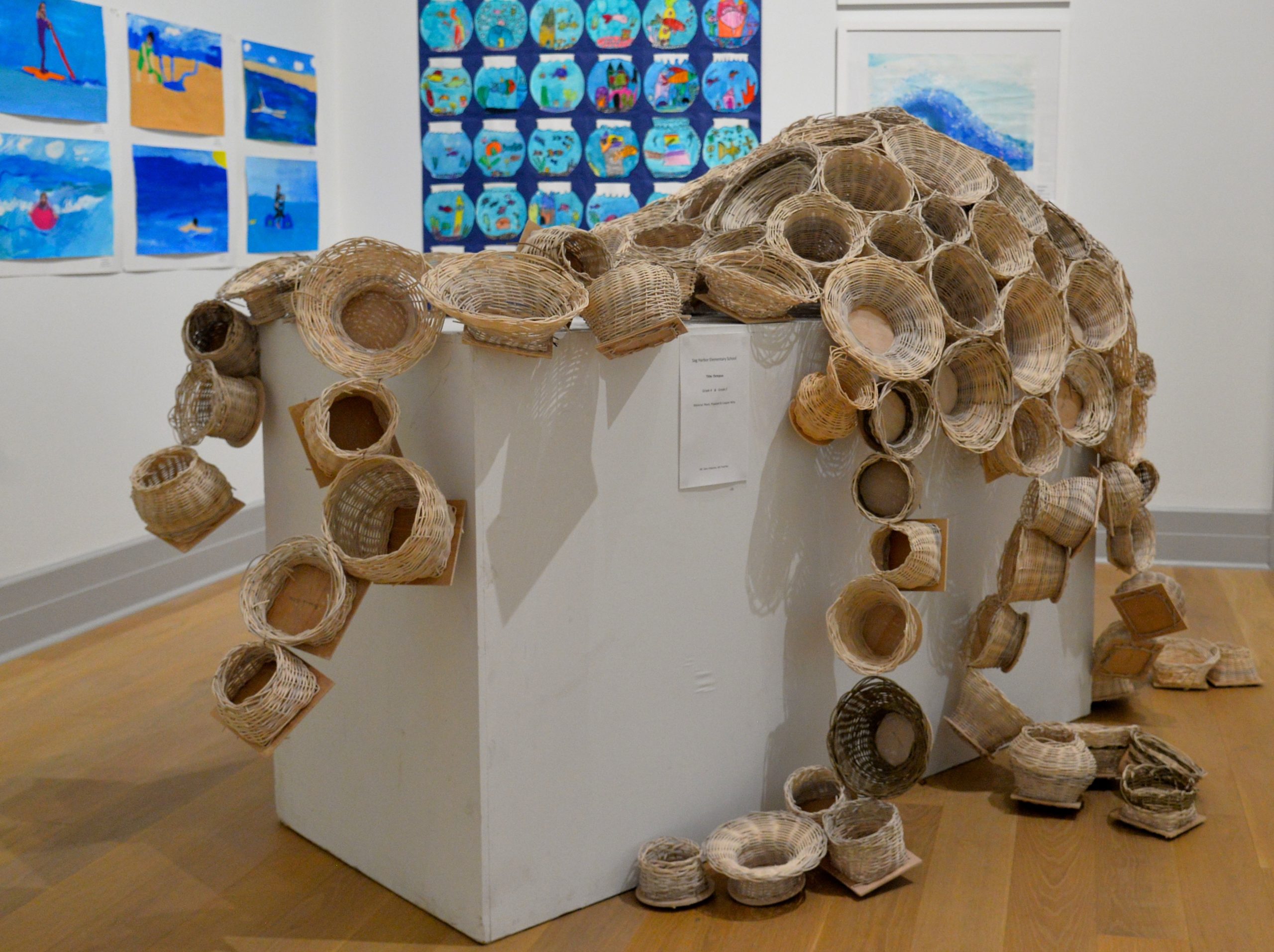 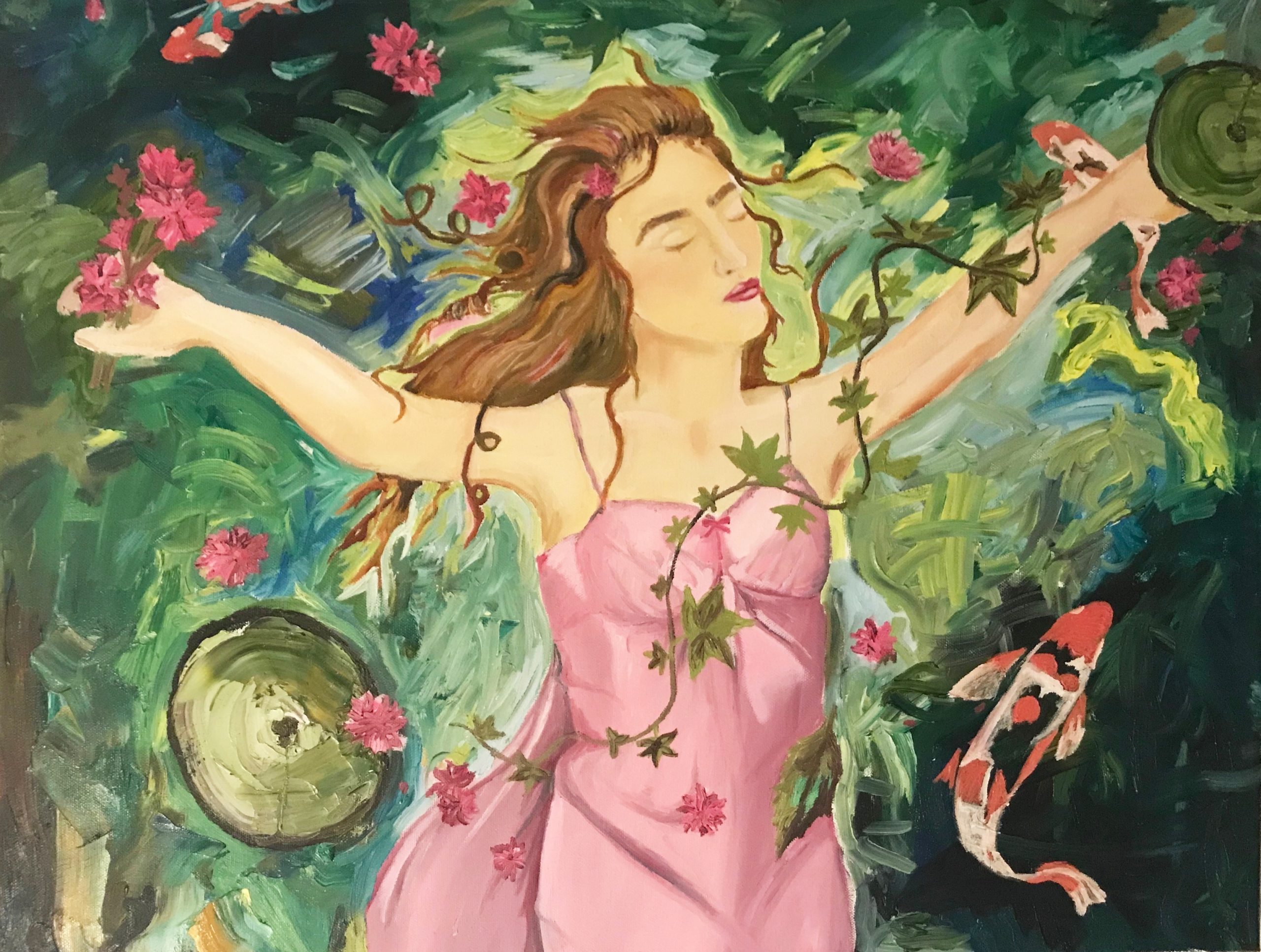 "Ophelia," a painting by 16-year-old Lilah Yektai from the Ross School. 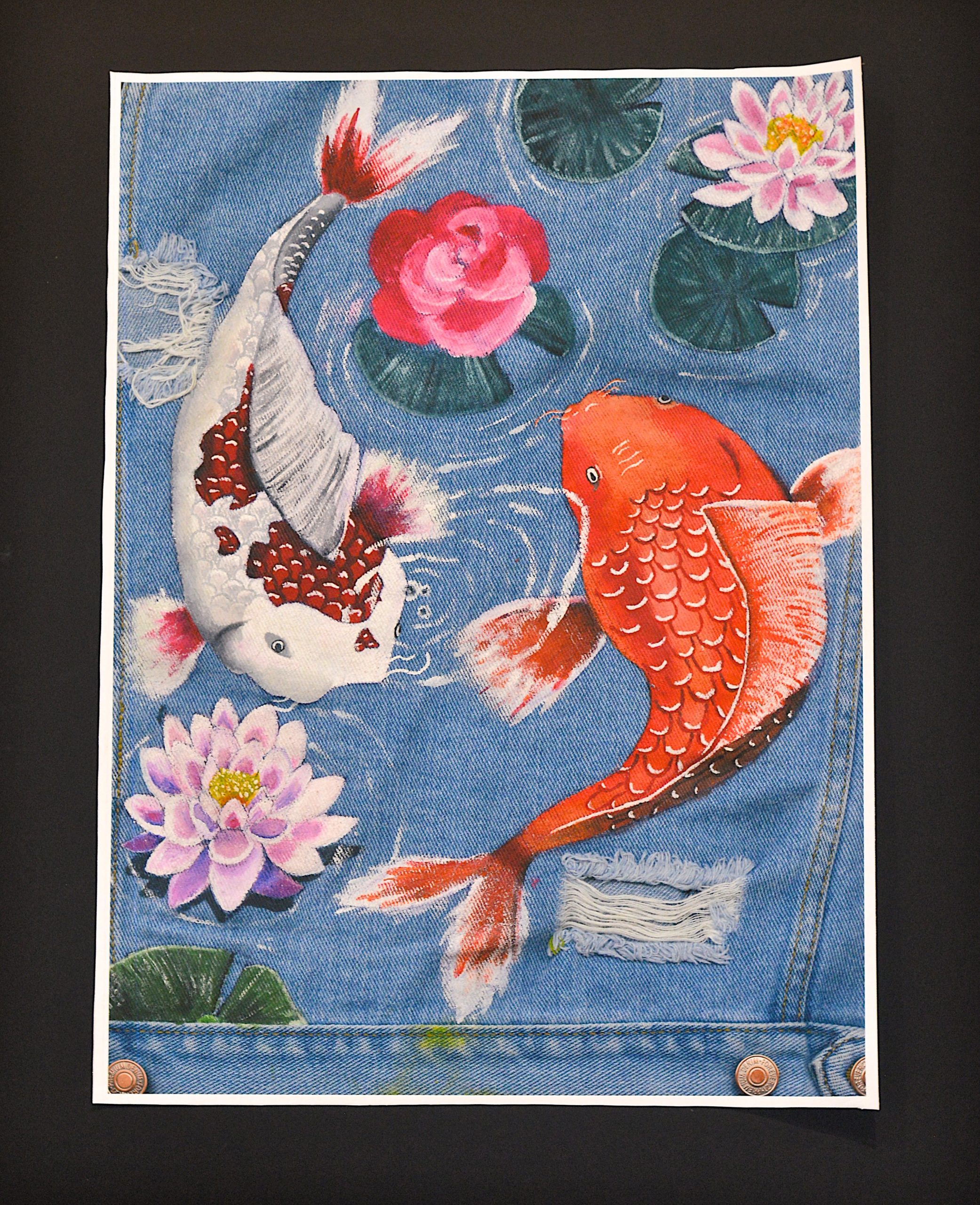 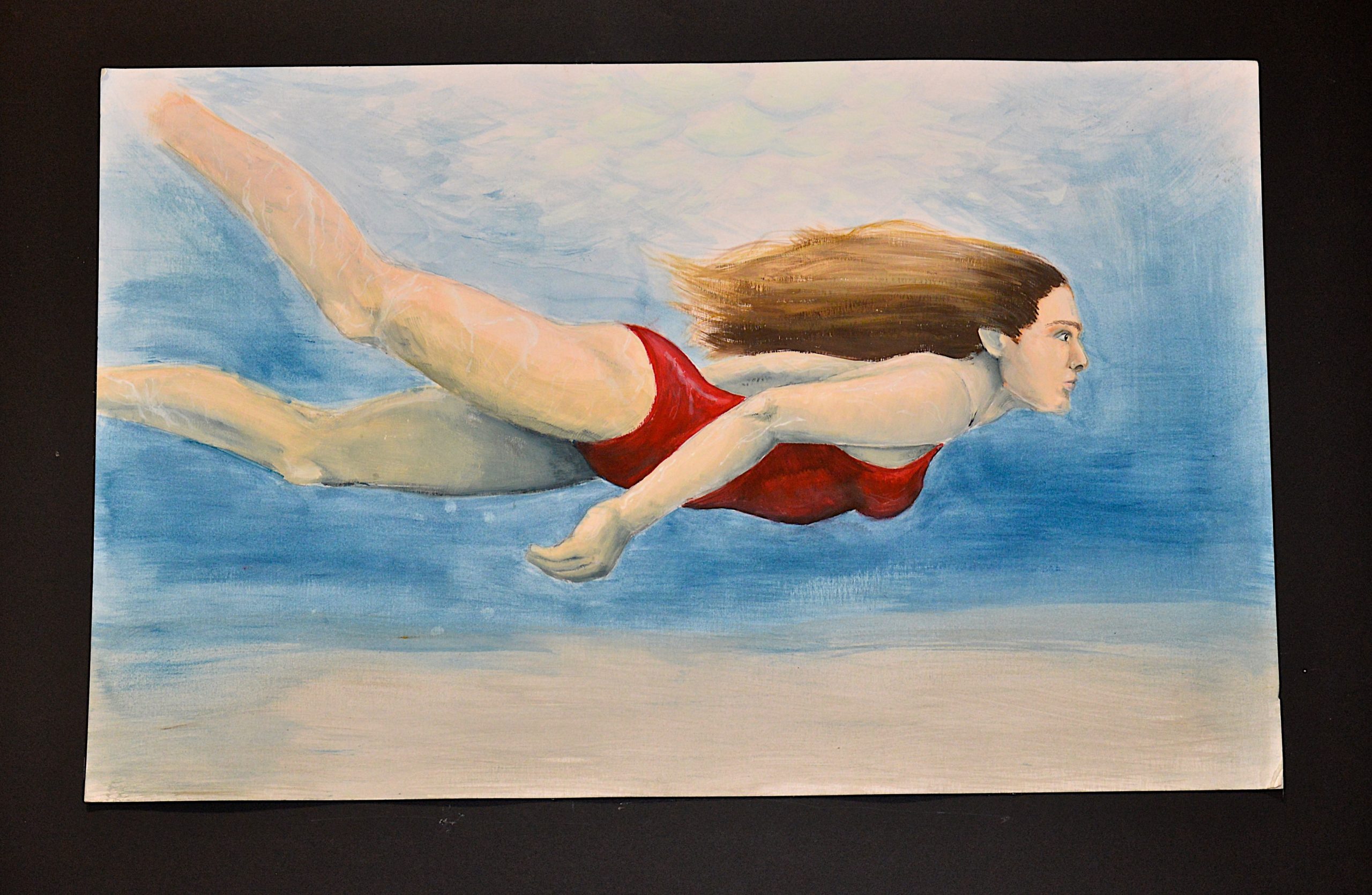 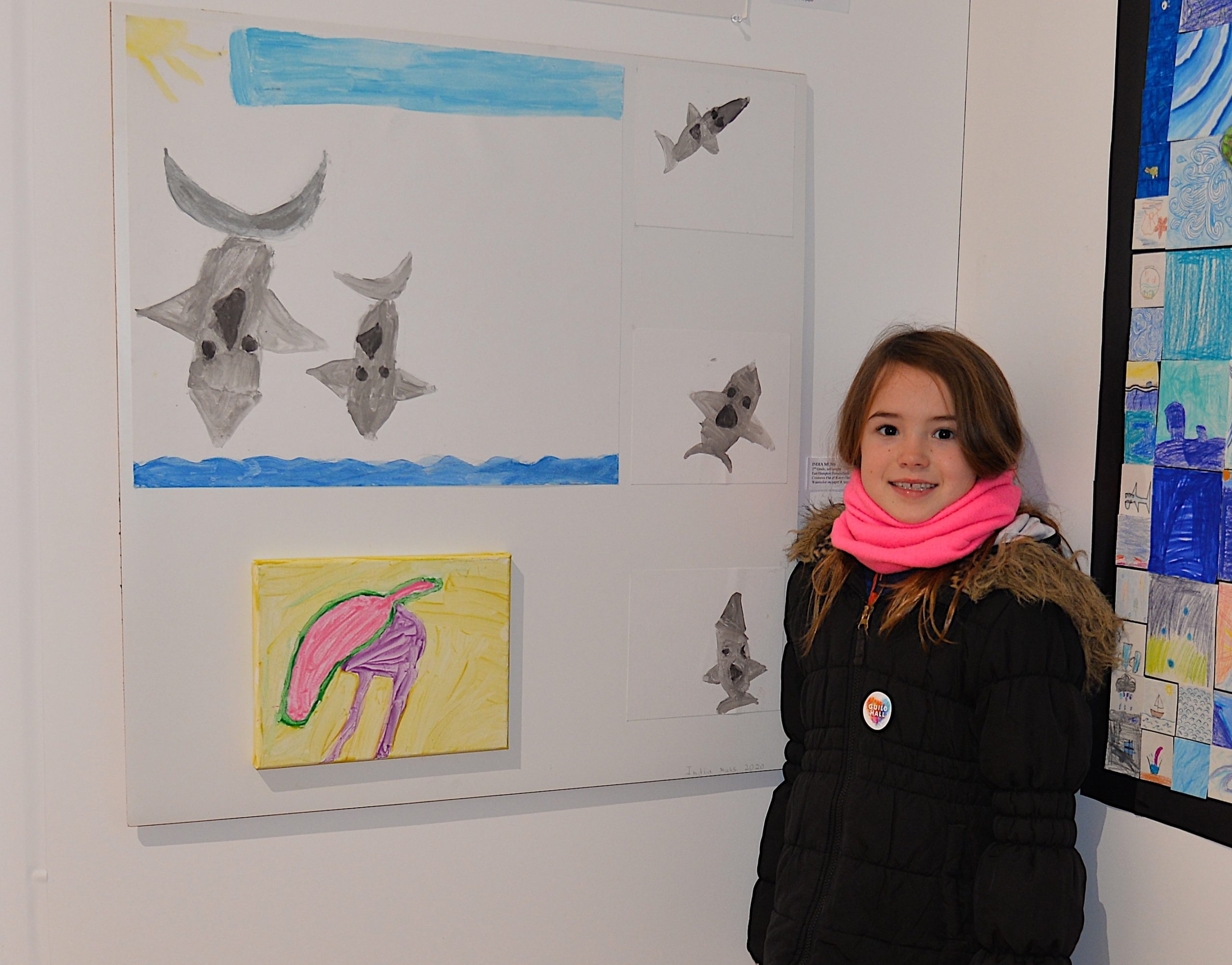 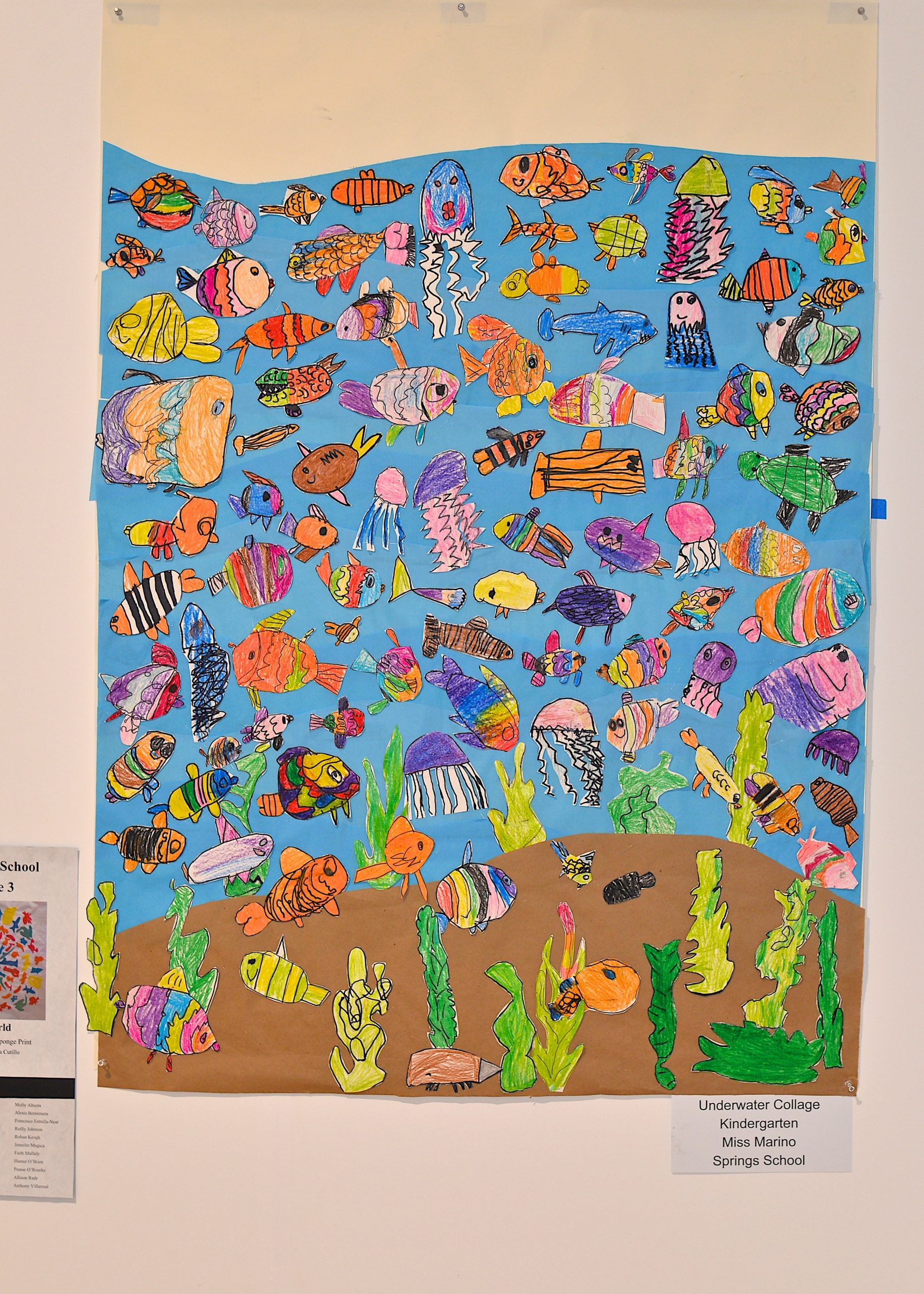 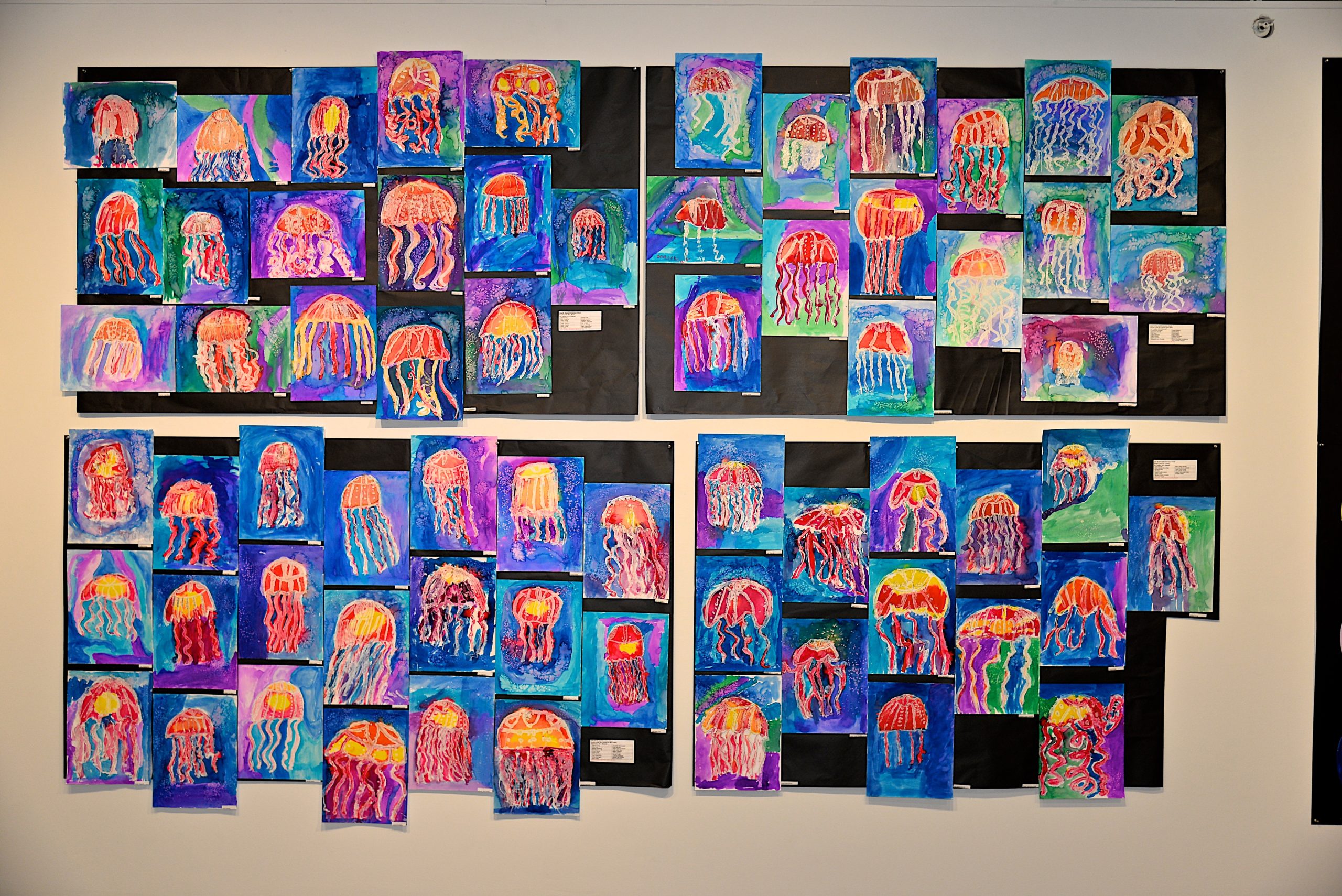 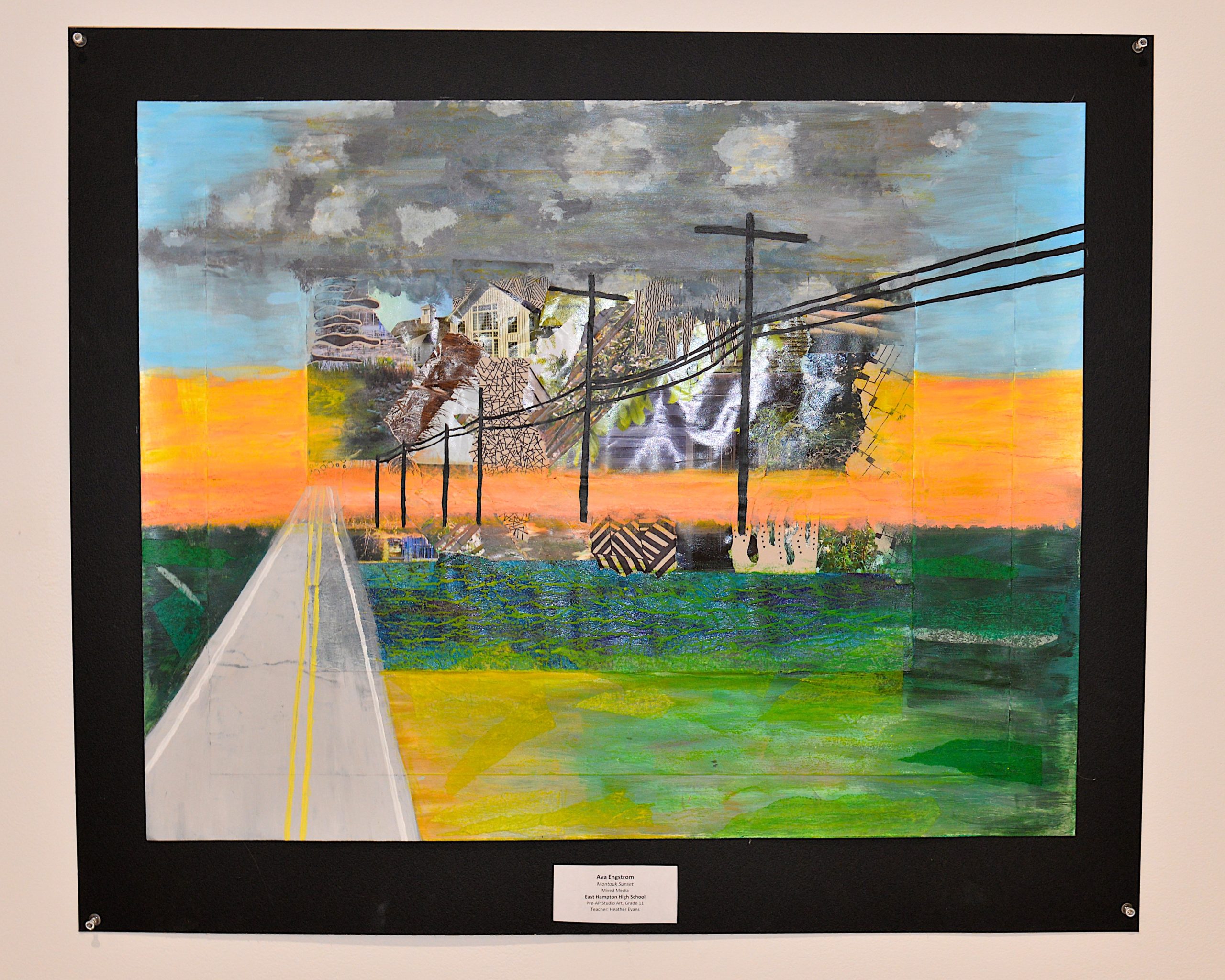 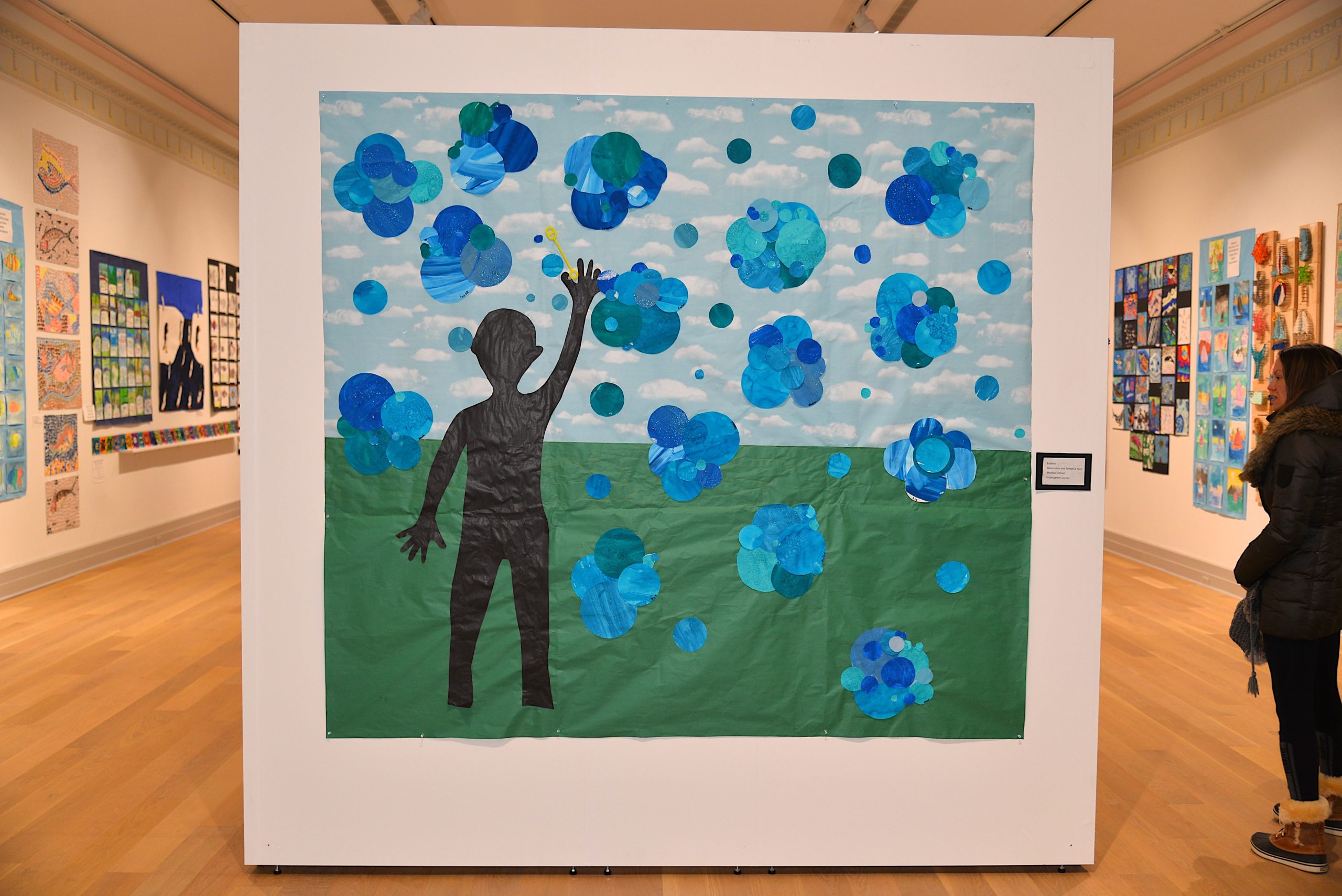 A work from the Montauk School kindergarten class. KYRIL BROMLEY 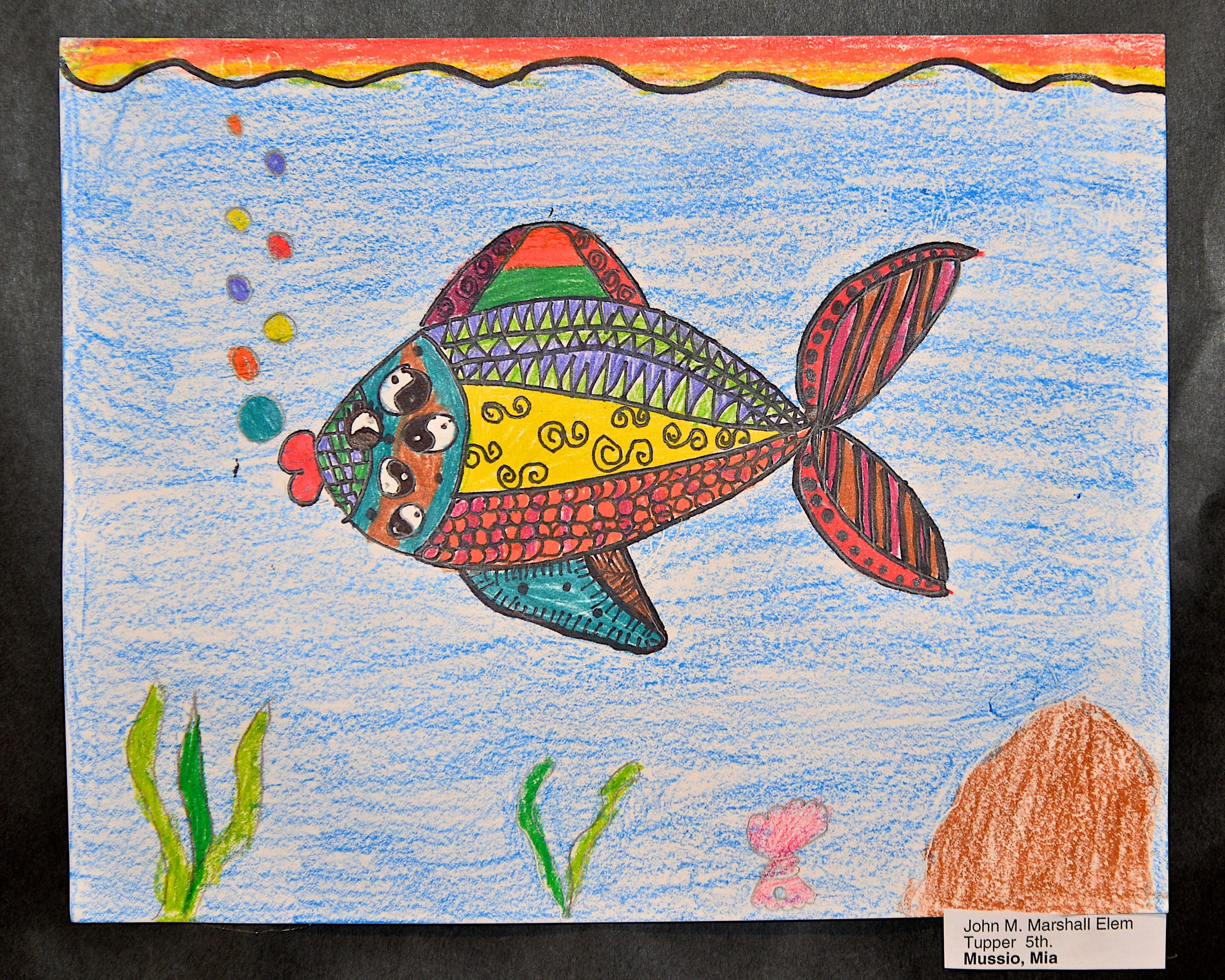 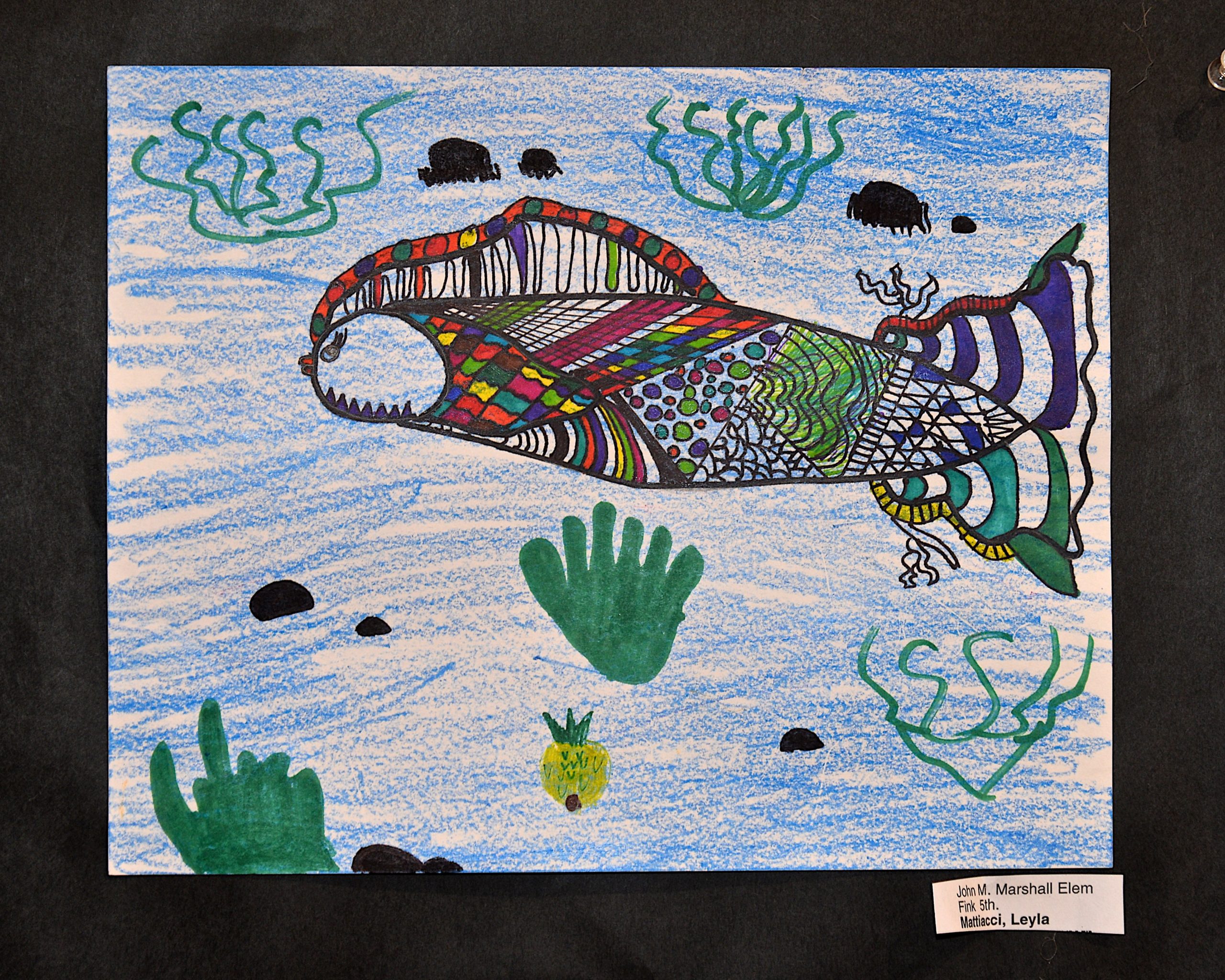 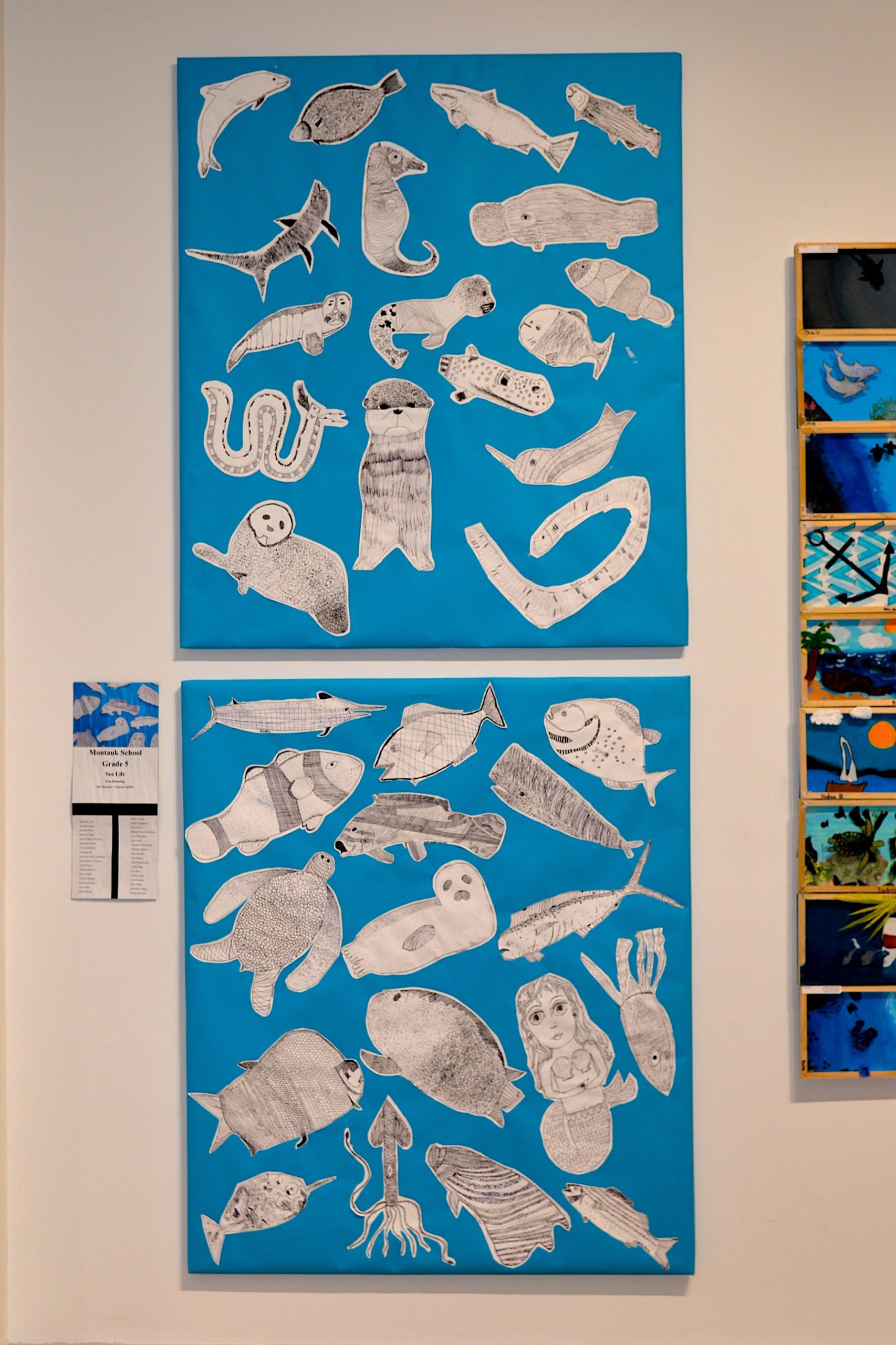 Every winter, for almost three decades, Guild Hall has turned over its galleries to 2,000 painters, drawers, sculptors, photographers, mixed media and digital visionaries — none over the age of 18.

This is the Student Art Festival, an annual showcase of burgeoning talent from Bridgehampton to Montauk that always proves to be a wild and raucous exhibition bursting with color and energy. With its opening last Saturday, for the first time in its 28-year-history, the show unveiled a cohesive theme, “Made by Water,” a reflection of the community, its local landscape and the hardships it faces.

And it is with no hint of irony that Lilah Yektai submitted her oil painting, “Ophelia,” still wet.

“It took me quite a long time, at least three weeks, to get at a place I liked it,” she said last Thursday afternoon, stepping away from her advanced art class with the permission of her teacher, Jennifer Cross, dean of visual arts at The Ross School in East Hampton. “And actually, right before I dropped that painting off at Guild Hall, I painted more on it.”

At just 16, the Ross School junior has already learned that an artist’s work is rarely done — along with thousands of students in kindergarten through 12th grade, who used this year’s theme as a vehicle to question, discuss and creatively respond to their own experiences with the Atlantic Ocean and the East End’s waterways, under the guidance of Anthony Madonna, the inaugural Patti Kenner Fellow in Arts Education at Guild Hall.

“I have been here just about a year now, and last year, when I saw the Student Art Festival, I was really amazed by the quality of the work, which is a true reflection of the instruction and leadership of their teachers,” he said. “But what I was missing was a through line. By proposing this theme to all of our East End schools, I was starting to see how different students in different areas, what they’re seeing and their viewpoints and their takes on different art forms and ideas.”

Over the fall semester, Madonna visited with art classes across the East End to brainstorm on the theme, and prompted the students to think on what “Made by Water” means to them: whether it’s a literal interpretation of the water surrounding the East End, or perhaps the light it creates, the legacy of artists it attracted, and even what may be lurking below the surface, as was the case with East Hampton High School junior Asha Hokanson and her painting on wood, “Whale.”

“I thought about where I live and how, during the summer, there are many whale sightings at the beach,” she explained. “I love the idea of these massive creatures that are so, so small in perspective to the ocean. I also loved how, although these animals are harmless, there are so many unknown factors about them, which is very similar to the idea of the deep and dark ocean.”

Her fine arts teacher, Margaret Zubarriain, said she encouraged her students to use the theme as a baseline.

“I structure my studio to teach artistic behaviors, so working thematically and conducting research is something that the artists are very familiar with,” she said. “I gave the ‘Made By Water’ theme to my advanced students as an option, but did not restrict them to it, as I believe their most profound work comes from exploring themes with strong personal significance.”

For some, that meant using “Made by Water” as an avenue into the pressing climate crisis, from reported global warming and pollution to rising sea levels and extreme weather patterns — all consequences felt on the East End, making this theme an obvious first choice for the festival, according to Casey Dalene, curatorial assistant at Guild Hall.

“People are able to process emotions and communicate emotions, I believe, in a much more visceral way through art making,” she said. “Our language is really limited and art allows for so much more expression. Actually, a lot of the projects you will see do tackle this issue, or address it, within the content of the work. I think it’s a beautiful way for the artists, the students, to explore it, to tackle it emotionally and mentally, and have a place to express their concern, or express their love of the water, and even communicate the problem even more.”

For Lilah, the theme allowed her to process her reaction to Shakespeare’s “Hamlet,” and more specifically, the ultimate demise of Ophelia, who lost the will to save herself from drowning in a brook after falling from a snapped willow tree branch.

“I did a study on mental illness because I know a couple friends who struggle with it. So Ophelia struggled with a mental illness in the story, and that’s why she committed suicide in the story,” Lilah said. “The fact that she really elegantly and gracefully died in the pond by the willow tree really stuck with me, so I did a couple drawings of Ophelia and then me and Mrs. Cross thought it would be a really good idea for me to paint a bigger painting.

“In a couple parts of the painting, I used a scalpel instead of a brush and I smeared paint,” she continued, “trying to bring the poeticness of Shakespeare’s ‘Hamlet’ into the painting.”

The chance to exhibit work in a world-class, accredited museum — at the high school, or even the elementary school, level — is not lost on any of the students or their educators, said art teacher Laura Marino, who reported that all 700 students from Springs School are represented in some way.

“It’s such a great opportunity that our students have here on the East End. To see their work in a venue like Guild Hall is huge, and it’s an opportunity that not all children ever get in their life,” Marino said. “I went to college with students who, at a collegiate level, were just getting to show their work in a formal gallery setting. So to be that young and be able to walk into a space and see your work, and have that sense of ownership and pride, is so special and such a great opportunity for them.

“And to see work from other schools, too — to see how other students have interpreted the same assignment and see the creativity that’s here on the East End — is another great learning experience for them,” she added.

Gary Osborne, an art teacher at Sag Harbor Elementary School, used the theme to present a story for his fourth- and fifth-graders to grasp. And in it, he explored the reasons ancient civilizations lived near water, how they transported it, and the goods that came from it — such as the baskets each of his 150 students wove by hand, after soaking their own reeds in water.

“They were able to value what is made by water on a different level. Rather than us just thinking water is for bathing and drinking and cooking, you need it to actually make things,” he said. “And then we turned all the baskets into an abstract octopus.”

He interrupted himself with a laugh. “It’s actually bigger than I thought it was gonna be, so I hope they found a good place for it. I’m sure they did,” he said. “It was quite an undertaking. But it really shows the children that they can all be a part of something collaborative and create one unified idea from it. When you see it, it’s this eye candy of textured weaving.”

Each year, hundreds of participating students turn out for the Student Art Festival’s official opening reception that, on Saturday afternoon, will feature family workshops, performances and film screenings from school and community dance, theater and music ensembles — and, of course, the opportunity for them to see their own work on view.

“Showcasing a student’s work is so valuable, even if there’s no awards involved,” Osborne said. “I think it’s such a valuable experience for all children, to see their work that’s out of the classroom on display for the community to see and honor. It’s an enriching experience and I value that highly as an art teacher to showcase the kids’ work. It’s important to me.”

Now on view through February 9, the 28th annual Guild Hall Student Art Festival will have an opening reception on Saturday, January 25, from 2 to 5 p.m. at the East Hampton museum, which is at 158 Main Street. Admission is free. For more information, call 631-324-0806 or visit guildhall.org.