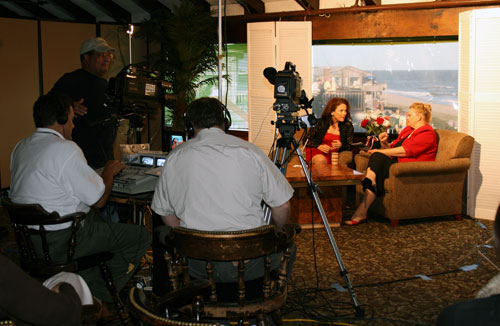 The daughter of a Holocaust survivor, a prominent American actress, directors of film festivals, and a locally renowned fishing captain were brought together at Gurney’s Inn on Tuesday, September 23, to tape 10 new episodes of the “American Dream” talk show. The only unifying traits shared by the guests seemed to be diverse ancestry and unique life stories.

“American Dream” was initially created in 1996 to explore the ancestral roots of interview subjects and their cultural niches in America. Now in its 12th year, the talk show is bringing to the forefront the message of its title, underscoring the journeys guests take toward fulfilling their visions, which are emblematic of the American dream.

Montauk resident Ingrid Lemme, the program’s creator and host, explained during the September 23 taping session, the show’s underlying theme of democracy as the stepping-stone for all those reaching for the American dream. “It’s about people’s origins,” she said. “It’s a message of peace, of making everybody equal.”

The talk show’s premise, in other words, is that the dream of success in America is not reserved for the chosen few; these visions, she suggested, can be achieved by all through hard work and dedication.

Having emigrated to the United States two decades ago from her native Germany, Mrs. Lemme is aware of the challenges foreigners face in cultural assimilation.

“I have a feeling for the subject of coming to America, because I came as an immigrant. I know what it means to pack your bags and to start all over again,” she said.

In the beginning, Mrs. Lemme was particularly concerned that her accent would be a hindrance to her vision of creating and hosting her own talk show.

But she didn’t allow her foreign inflection to hold her back. Working as the respected marketing and public relations director at Gurney’s Inn in the mid 1990s, Mrs. Lemme got approval from the late Nick Monte, former innkeeper of Gurney’s Inn, to tape the talk show every 6 to 8 weeks in the panoramic, waterfront setting of the Admiral’s Room at the inn. “American Dreams” is not recorded during the high season, because Gurney’s needs the Admiral’s Room for other purposes and cannot as easily accommodate the show’s guests for overnight stays.

As it turns out, Mrs. Lemme says that her German accent has been an asset in her professional life, helping her to create a unique on-screen persona.

“People are more inclined to figure out where they came from,” she said of American citizens who pick up on her accent. “I sound like many people’s grandmothers, or great-grandmothers,” she said, which reminds guests and viewers of their own cultural heritage.

Nick Monte’s nephew, Paul Monte, current general manager of Gurney’s Inn and one of the three executive producers of the talk show, says that Mrs. Lemme’s accent “lends itself perfectly to the theme of the show” in that it “allows her to hang onto some of her roots while still being an American.”

“American Dream” was initially aired on LTV, the local East Hampton public access station, and, in 2000, was picked up by WVVH-TV Hamptons Television, which is broadcast around the tri-state area.

Mr. Monte gives all credit for the show’s staying power to its host.

“Ingrid is the show. Her life and American dream are the inspiration for the show,” Mr. Monte said, adding that the series was designed as a forum for “uplifting stories” and “positive influences” for the viewers.

Unlike other contemporary talk show hosts, “Ingrid actually listens to her guests and viewers, and the program is made right before one’s eyes,” according to Gregory Schimizzi, chairman/founder of WVVH-TV. He also pointed out that the show is meant to stand out from today’s allegedly “genuine” reality TV shows by remaining uncontrived.

Mr. Leik, executive director of the Long Island Film Festival, values the talk show’s premise of heritage and family struggles and goals. He was in the midst of organizing the 4th annual CultureFest na Gaeilge, held in October, a celebration of Irish language and culture.

Ms. Feldshuh, who has performed at the John Drew Theater in East Hampton and at the Westhampton Beach Performing Arts Center, now plays Irena in “Irena’s Vow.” The story revolves around Irena Opdyke, a Polish Catholic who, as a housekeeper for a prominent German major, put herself at high risk to save the lives of 12 Jewish refugees.

Mr. Monte said that Ms. Feldshuh’s appearance on “American Dream” was particularly memorable, since the actress’s role in “Irena’s Vow” gives American theater audiences a chance to understand and appreciate Mrs. Opdyke’s heroism during the Holocaust, so far removed from where the events unfolded.

“I think that’s quite a trip for the story, and for the individual,” Mr. Monte said.

Ms. Feldshuh said that Mrs. Lemme’s talk show “taps the river of common human behavior,” the wellspring of one’s origins and visions. The actress added that the show conveys the possibilities of accomplishing one’s own “American dream,” which, she says, is far from myth.

As a native New Yorker, Ms. Feldshuh appreciates her diverse heritage—in particular, her grandparents on both sides, Europeans who made the courageous move to America in the early 20th century.

“My family has been rewarded for their hard work. It’s not a free lunch. In the words of Thomas Edison, it’s usually 99 percent perspiration, 1 percent inspiration,” she said, asserting that both dedication and talent are needed to achieve one’s dream. The actress added that her character in “Irena’s Vow” sets a prime example of an “ordinary person doing extraordinary things,” which, she said, is one of the archetypes of the American dream.

Recalling her mother’s altruistic spirit, Mrs. Smith said that she associates the notion of the American dream with transcending personal ambitions by “caring for one another” and “being human.” The talk show, she said, should honor the unsung heroes of this world, and the sacrifices that people make at great personal cost.

“We would never be what we are if it weren’t for the steady, new influx of people with drive and new ideas who are renewing all of us over and over again,” Mrs. Lemme said of foreigners such as Mrs. Opdyke.

The 30-minute-long “American Dream” episodes air on WVVH-TV on Tuesdays at 6 p.m., Fridays at 7 p.m. and Saturdays at 2 p.m. The taping of future episodes will resume in November.