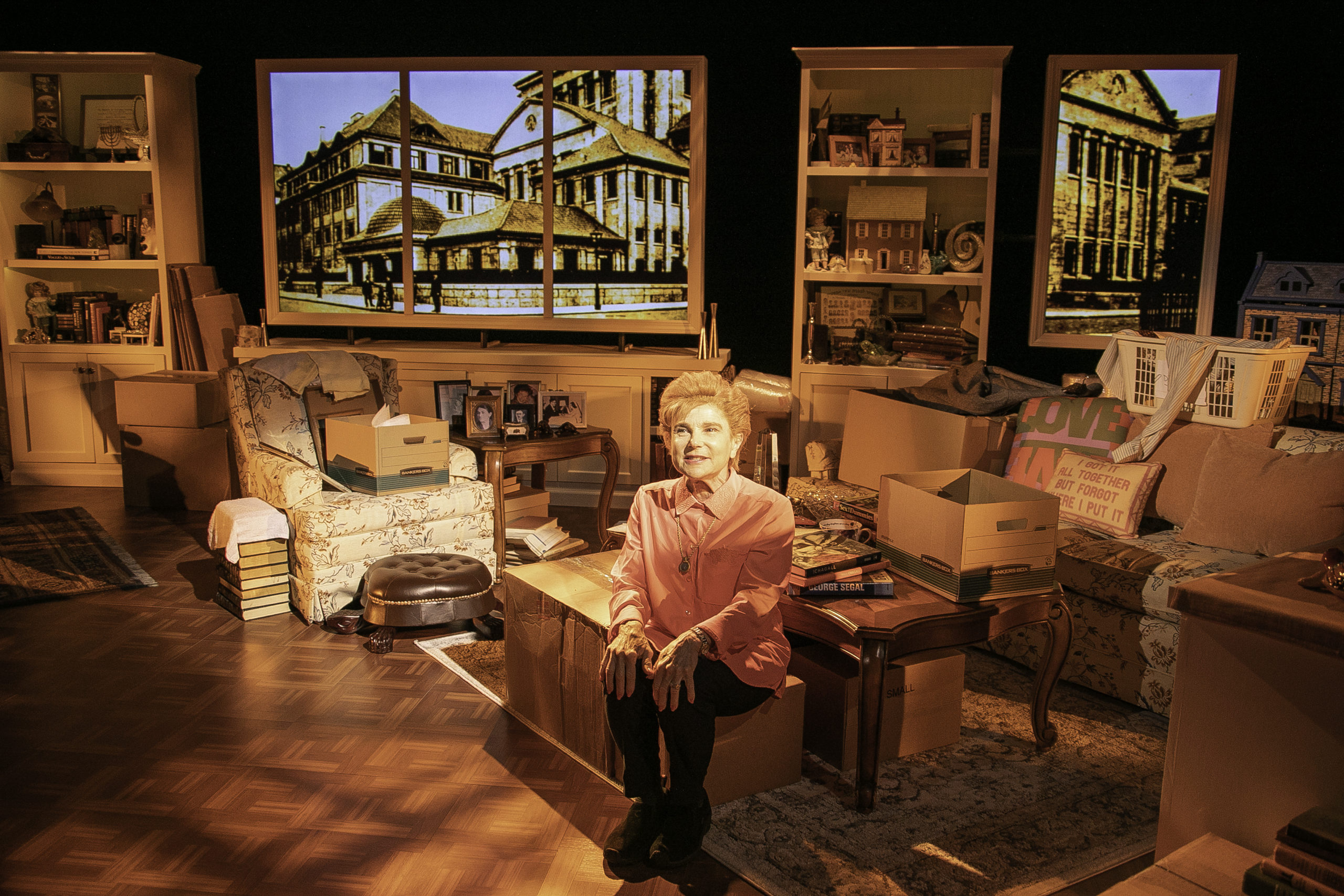 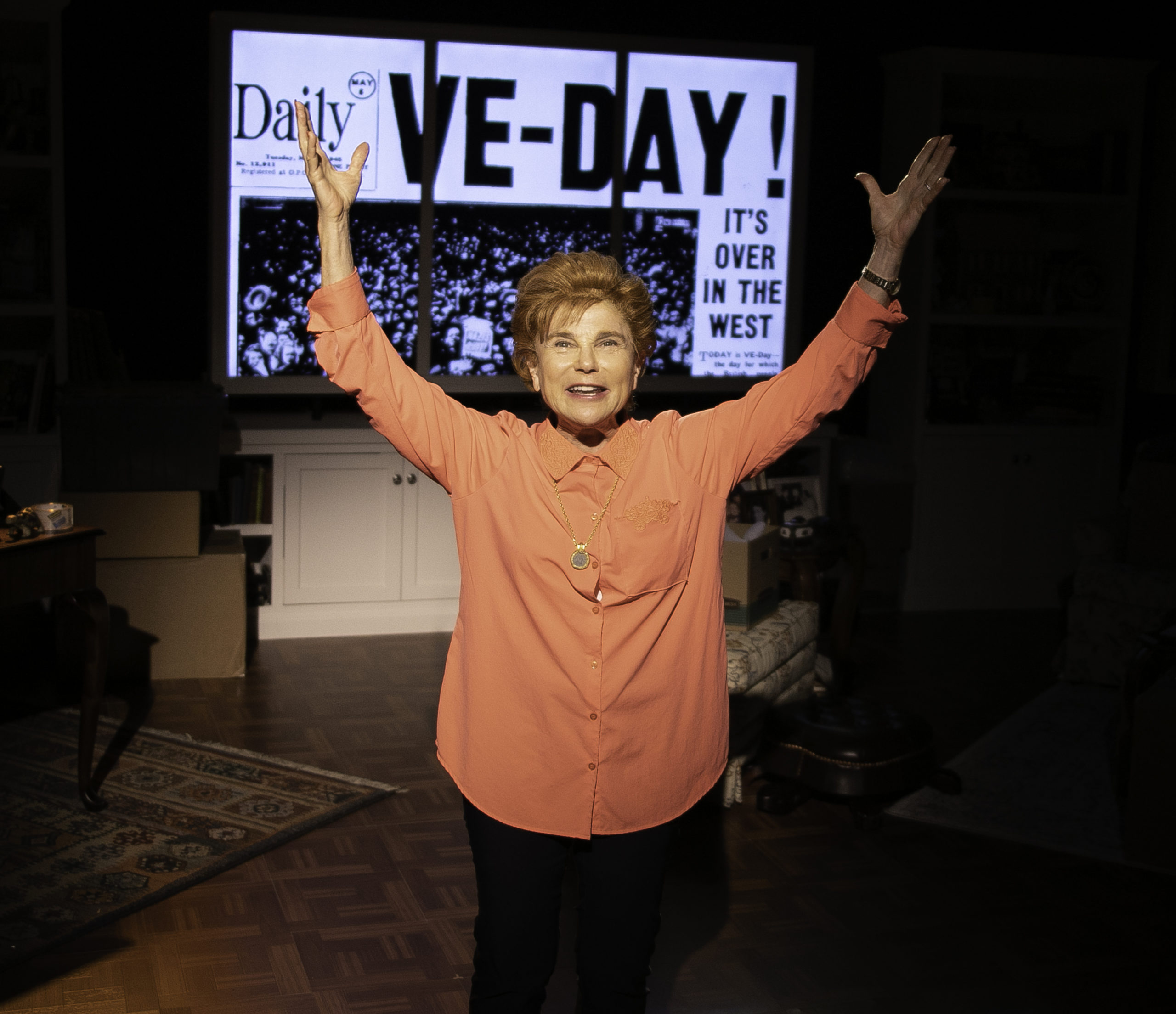 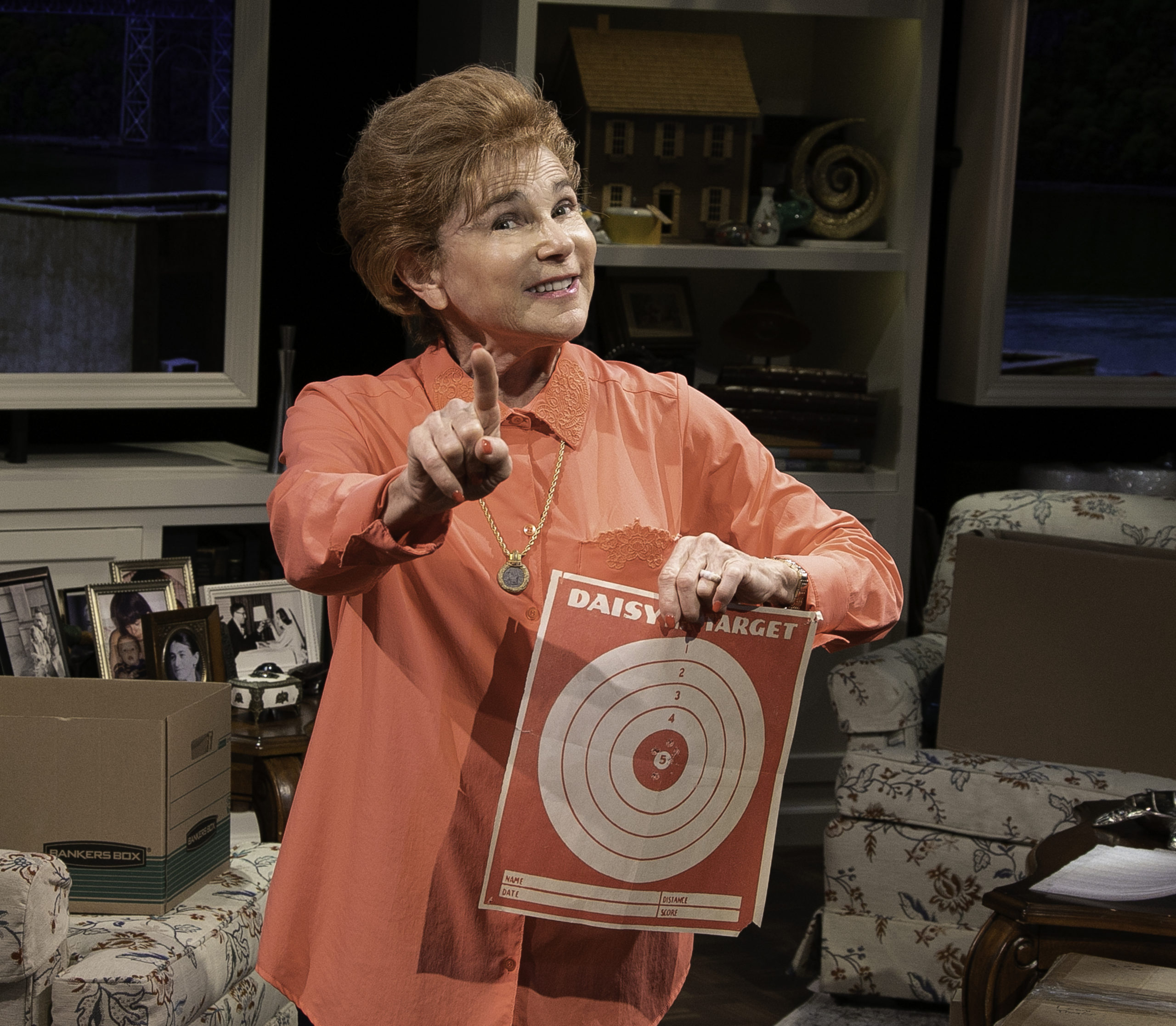 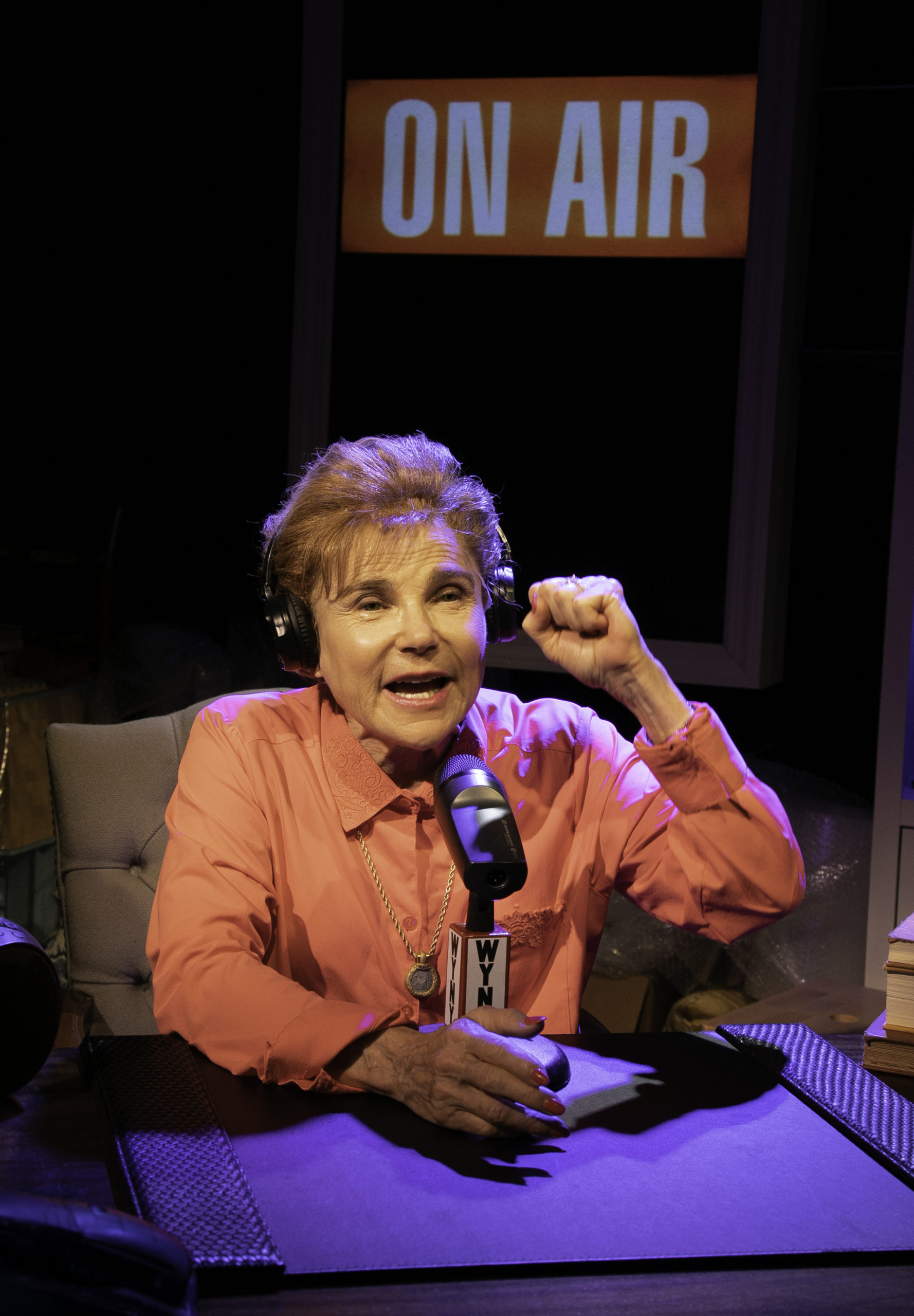 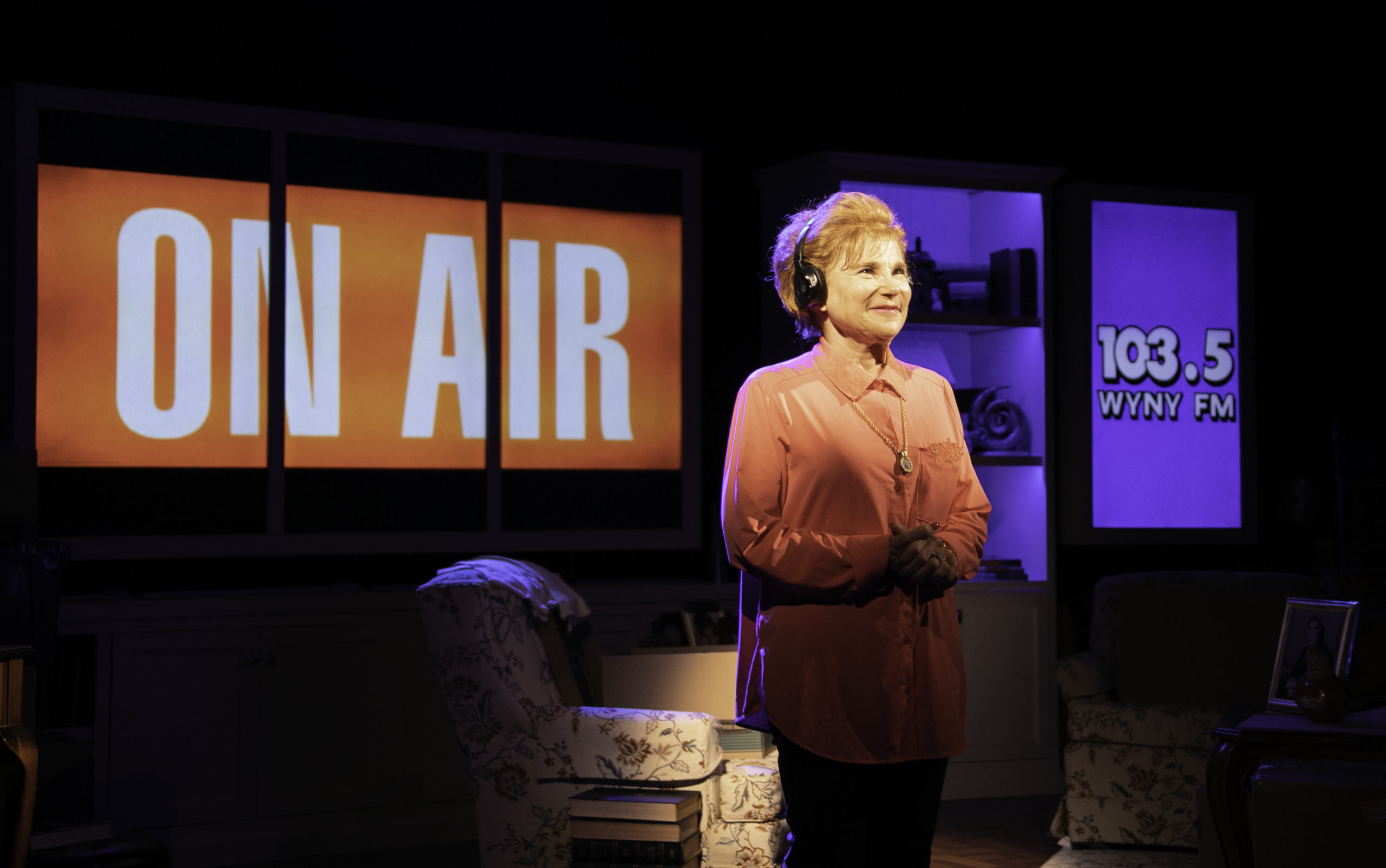 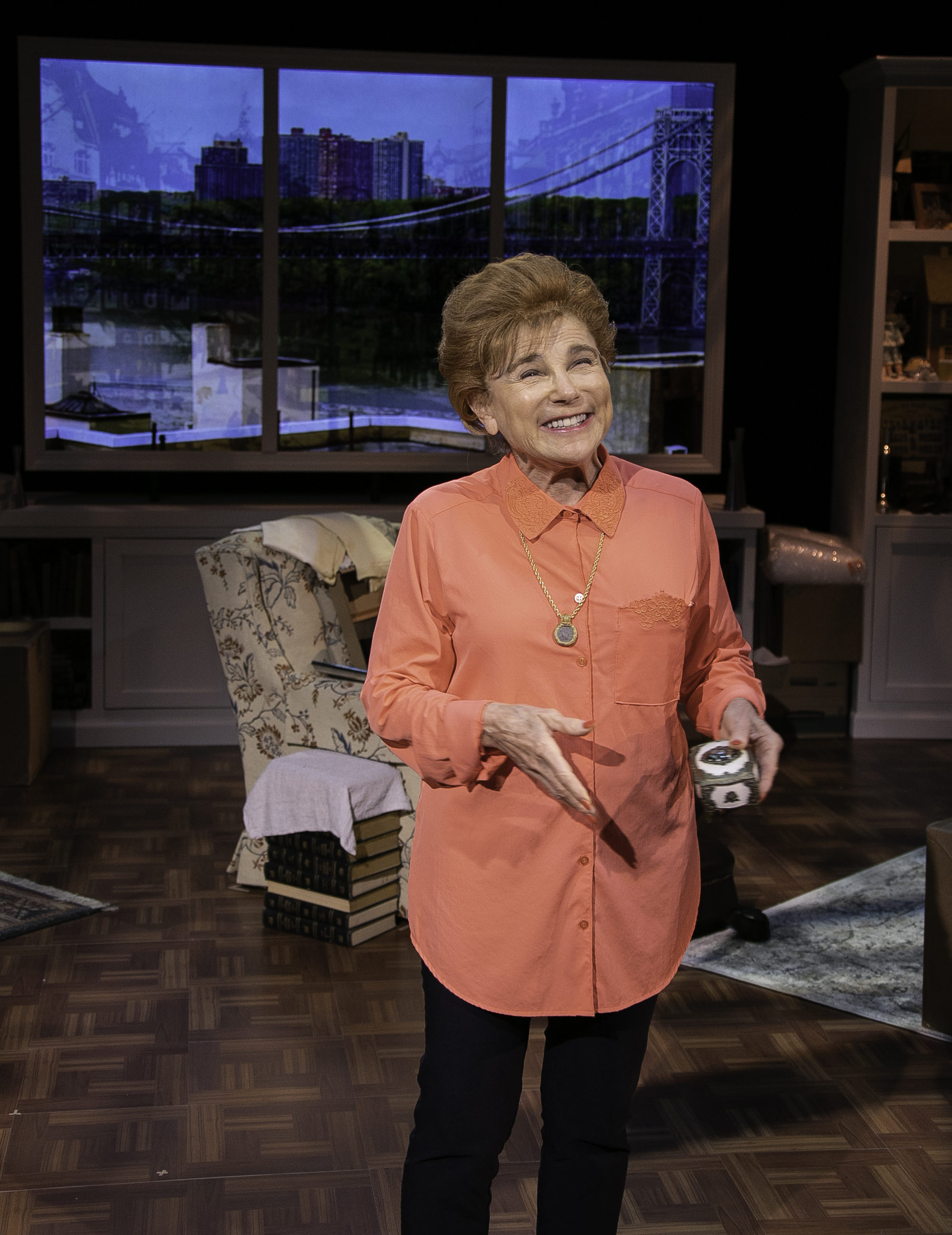 Perseverance. It’s a powerful motivation and one that seems particularly poignant at this juncture in history, given the fact that the nation is emerging from a truly dark period marked by a global pandemic that has killed hundreds of thousands of Americans. On a micro level, perseverance is also a useful term for describing one’s ability to overcome adversity and incalculable odds by surviving against all expectations, rising above perceived limitations and ultimately, changing the world for the better.

This production, which runs through June 27, marks Bay Street Theater’s return to live, in-person shows after 431 days in the dark. Skillfully directed by Bay Street Artistic Director Scott Schwartz, in light of lessons learned in 2020 about what’s important in life, there perhaps could be no more fitting a return to the stage for many reasons, not the least of which is that on June 4, Dr. Westheimer celebrated her 93rd birthday. The following evening, “Dr. Ruth,” as she is affectionately known by millions, was seated in the audience at Bay Street Theater to enjoy the opening night performance of the play based on her life.

And what a play it is. Set in Dr. Ruth’s Washington Heights apartment in upper Manhattan, scenic designer Andrew Diaz and projection designer Brian Staton have provided us with expansive views of the New Jersey side of the Hudson — the Palisades and George Washington Bridge figure prominently — and throughout the 90-minute production (which runs without intermission), Feldshuh as Dr. Ruth speaks directly to the audience as she busily flits around the space, gathering photographs, books and tchotchkes while placing it all into boxes. It’s June 1997, a few months after the death of Fred Westheimer, her beloved husband of 36 years, and she has decided to leave the apartment they shared for decades and move downtown for a fresh start and a view of the Statue of Liberty, which she recalls first glimpsing from the ship that brought her to the United States in 1956.

Of course, there are many memories to be had in the cluttered apartment, and as she bustles around offering her elfin giggle while discovering mementos to pack up, they become entry-points for Dr. Ruth to share her amazing journey. Naturally, we learn how this diminutive, German immigrant came to earn her master’s degree in sociology from the New School followed by a doctorate in education from Columbia University, and in middle-age, became the country’s foremost sex expert. The play offers liberal glimpses of her work in that role as we witness Dr. Ruth fielding embarrassing on-air phone calls from men concerned about penis size or listen in as she counsels young women about the pitfalls of carrying on affairs with married men.

But at its heart, “Becoming Dr. Ruth” is a story about more than Westheimer’s improbable and meteoric rise in the world of sex therapy and broadcasting. Ultimately, it explores the importance of family and even in the face of familial genocide, shows how one woman created her own by forming unbreakable bonds with the people she loved throughout her life.

For Dr. Ruth, the odds were certainly stacked against her. Born Karola Ruth Siegel in Frankfurt, Germany, in 1928, she was 4 years old when Adolph Hitler became chancellor of Germany, and she was 10 the day her father was sent to a work camp a week after Kristallnacht. She recalls that he smiled and waved as he jumped into the truck that took him away. Soon after, her mother and grandmother arranged to put her on a Kindertransport, and on January 5, 1939, Dr. Ruth arrived at a Jewish orphanage in Switzerland where she would ride out World War II. The last letter she received from her family came in 1941. She never saw them again.

That’s when others became her salvation and that’s when the views of New Jersey in “Becoming Dr. Ruth” transform into something more — windows reflecting the people and places that represent her earlier life, love and losses. It’s a moving effect and one that brings the story of the Holocaust front and center, even as so few survivors remain alive to tell the tale first hand.

We meet Walter, Dr. Ruth’s first love, a “younger man” who captured her heart in the orphanage when he was 12 and she was 13. We learn of her move to Palestine as a teenager after the war where the Polish Jews looked down on German Jews and she became a sniper with the paramilitary organization Haganah. We also learn of her first sexual encounter on a kibbutz at the age of 17, without contraception, though she assures us she knows better now. Next, we follow her to Paris where she pursues a teaching degree and on to the United States where she completes her education and starts her career. Along the way, we discover she was married three times — the final time to Fred Westheimer, whom she met while skiing in the Catskills in 1961. It was in the New York apartment that she and Fred raised their two children, daughter Miriam (from Dr. Ruth’s second marriage) and son Joel.

There’s a lot to pack in with this script and in portraying Dr. Ruth, Feldshuh provides an astute and stunning performance of a woman about whom most people only know the superficial basics. Spot-on in her demeanor and offering a decent German accent, Feldshuh titters just like her famous counterpart and frequently utters her trademark affirmation, “terrific.” This is a demanding role, one made more so by the fact that it is Feldshuh, alone, who occupies the stage throughout the entire 90-minute performance. One-person plays often run the risk of relying too heavily on exposition in the telling of a tale that happened long ago. But that’s not an issue with St. Germain’s script. He keeps the action crisply engaging and fresh by interrupting Dr. Ruth’s remembrances of the past with the intrusion of present day concerns in the form of phone calls from people now in her life.

Schwartz’s direction is well-considered, and though the entire play takes place in a single room and in the course of one act, the action feels natural and never forced. Whether she’s climbing a step-stool to reach an important object, or showing the audience a meaningful book or photograph, we truly feel we have been invited into Dr. Ruth’s home and as a result, are privileged to learn so much more about her than we had ever known or understood before.

Maybe it’s the sheer thrill of being back in a theater with a live audience, or maybe it’s the timing of Dr. Ruth’s moving story, but on the heels of a worldwide pandemic and the 77th anniversary of D-Day, it feels as if hers is the story for our time and place. One that reminds us of the enduring human spirit and how resilience can be ours with effort and fortitude. How marvelous that Westheimer, herself, was present on opening night to offer her unique perspective and wisdom based on a long life well-lived. There were even flowers and a birthday cake to celebrate her 93rd birthday, and at the conclusion of the performance, Westheimer came down onto the stage to join Feldshuh, her friend, and offer some powerful insight and reminders to never forget the importance of her journey.

To which we add a heartfelt, “Terrific!”

“Becoming Dr. Ruth” is produced in association with North Coast Repertory Theatre in Solana Beach, California, David Ellenstein, artistic director and Bill Kerlin, managing director. The play runs through June 27 at Bay Street Theater on Long Wharf in Sag Harbor and seating is limited to provide for social distancing. Proof of vaccination and temperature checks are required at the door. Shows are Tuesday through Sunday with matinées on Sunday and Wednesday. Tickets start at $75. Visit baystreet.org for details.