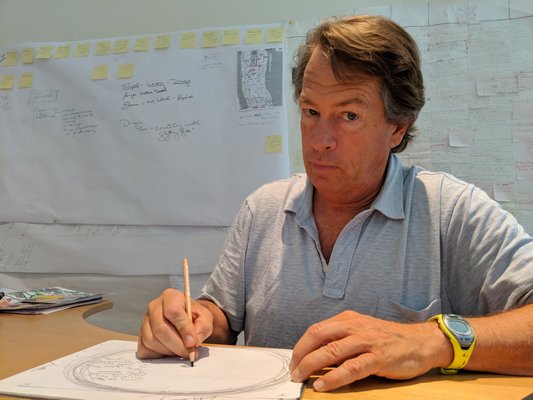 Billy Baldwin shows how he maps out story lines for his children's books. 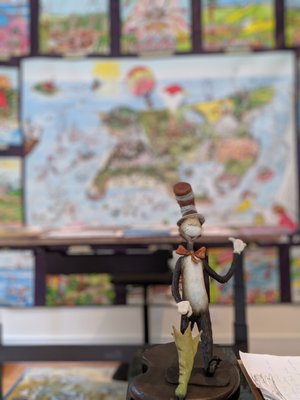 A trinket of Cat in the Hat sits on his desk. 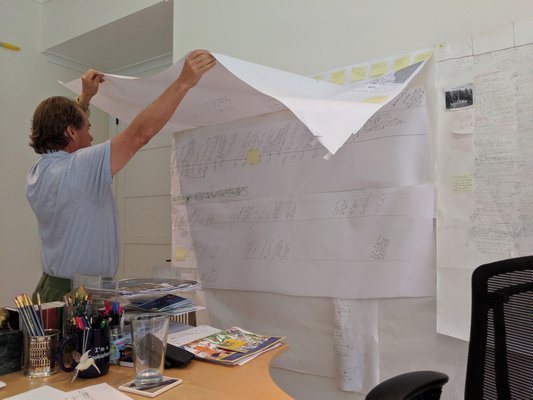 Billy Baldwin reveals all his writing plans for his children's books. 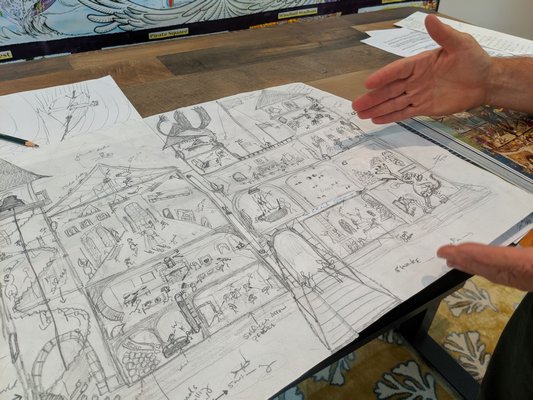 Drawing out a scene from the book "Story Glass." 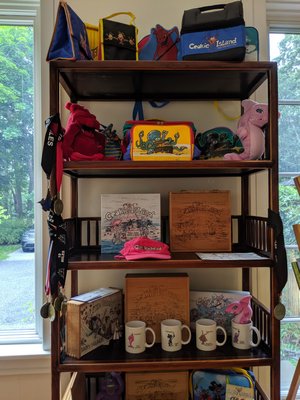 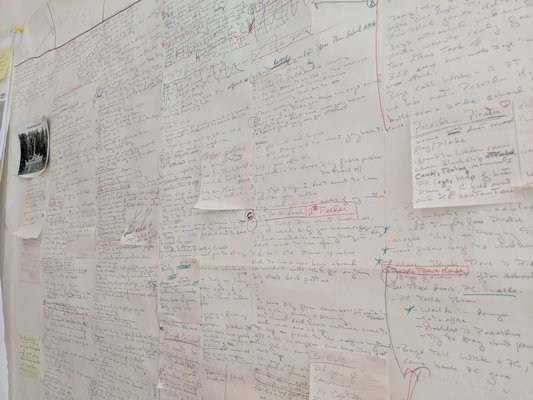 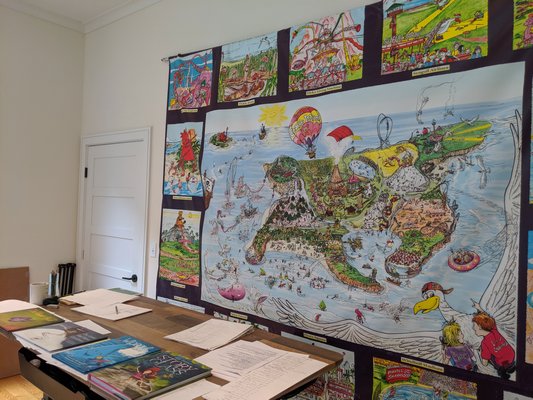 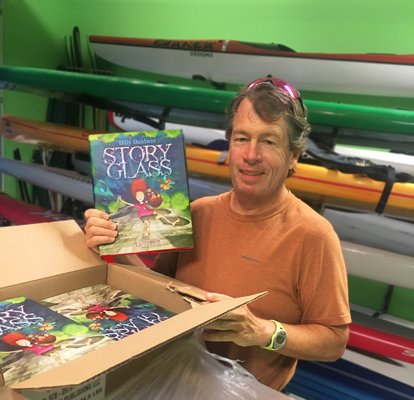 Billy Baldwin, a Sag Harbor resident, starts his routine around 6 a.m., immediately hopping on either a paddleboard or a bicycle.

After his workout, he goes to work in his home office. The wall behind his desk is covered in paper, lined with postcards and writings, a spillage of ideas that may become his next childrenŌĆÖs book. A shelf stands across from Mr. BaldwinŌĆÖs desk, stacked with memorabilia from Cookie Island, the New York City cookie company he founded and ran before moving to Sag Harbor in 2003.

He communicates with his illustrator, Liesl Bell, over Skype, because she lives in South Africa. They met on a website called Upworks, which is a global freelancing platform where businesses and independent contractors can meet and collaborate remotely. The two have yet to meet in person.

ŌĆ£Personality wise, we just click,ŌĆØ Ms. Bell said over Skype from Mr. BaldwinŌĆÖs home office. ŌĆ£HeŌĆÖs an extremely creative guy, which I completely appreciate. We laugh, we shout, we scream and the next day we work and itŌĆÖs all fine again.ŌĆØ

ŌĆ£We definitely go to areas that are very uncomfortable for us, regarding techniques, different elements of drawing and writing,ŌĆØ Mr. Baldwin added.

Between writing, working with illustrators and editors and organizing his annual Great Peconic Race, a paddle race around Shelter Island in honor of his late brother, Ted Baldwin, Mr. Baldwin has busy days in front of him.

ŌĆ£My heart is to try to help kids find their passions,ŌĆØ Mr. Baldwin said. ŌĆ£Because if something bad happens, if something good happens, you can fuel all that anger or love or whatever it is, into your passion.ŌĆØ

ŌĆ£Story GlassŌĆØ tells the story of a young girl named Jen who touches a ŌĆ£magic story bottle,ŌĆØ sending her back in time. In order to get home, Jen has to complete five challenges. The challenges address JenŌĆÖs biggest fears and, to make matters worse, she must defeat the master of the ŌĆ£Story Bottle,ŌĆØ an evil wizard. She's not alone, however, and fairies serve as her guide. Mr. Baldwin said his inspiration for the story came from some sea glass he found while walking on the beach.

ŌĆ£It is wonderful,ŌĆØ Ms. Bell said. ŌĆ£It was challenging to illustrate. It was long. IŌĆÖm quite happy with it, actually. In the end it had very beautiful images and the story kind of unfolded as I illustrated it, so it was an interesting process.ŌĆØ

Mr. Baldwin said that in the story, Jen asked the fairies why they go on adventures if it is scary. The fairies tell her that though they are afraid, they also have fun, which makes the adventure worth it. Mr. Baldwin can relate to his characters because he has dyslexia, making writing a challenge for him. Though, he said, it is worth it.

ŌĆ£I am Jen. ThereŌĆÖs always a part of you in your character,ŌĆØ said Mr. Baldwin, adding, ŌĆ£The dread of writing and doing this is worth the creation that I get to do. I was lucky to have a teacher, the greatest teacher in the world, Dr. Gertrude Webb.ŌĆØ

Because there was a stigma surrounding learning disabilities in the 1970s, when Mr. Baldwin was a student, he felt that he was different from the other kids in school. Then he had Dr. Webb as a teacher. She created her own curriculum that Mr. Baldwin said changed many lives, adding that one of her techniques was designed to raise confidence and lower frustration levels.

ŌĆ£She worked on my passions, what I was strong at,ŌĆØ Mr. Baldwin said.

The late Dr. Webb was the founder of the Massachusetts Association for Children With Learning Disabilities and the Program for Advancement in Learning for Adults. Mr. Baldwin said that Dr. Webb referred to learning disabilities as ŌĆ£learning abilities.ŌĆØ

ŌĆ£In the 1970s, that was unheard of,ŌĆØ he said. ŌĆ£She revolutionized the way people looked at people with learning disabilities.ŌĆØ

Dr. Webb was his teacher for three years and the two stayed connected long after Mr. BaldwinŌĆÖs school days.

When it comes to writing stories, Mr. Baldwin feel that he is best at mapping out story ideas. He does this by drawing timelines on sheets of paper, marking the beginning, middle and end. He then fills out the lines in between. Underneath, he creates timelines for his characters, charting out their stories and how they connect to the protagonist.

ŌĆ£I donŌĆÖt care how many pages it is,ŌĆØ Mr. Baldwin said. ŌĆ£I donŌĆÖt care if itŌĆÖs a good or bad idea. Never edit your idea, just throw it out there.ŌĆØAnd after a day of writing, planning and communicating, how does Mr. Baldwin unwind? By staying far away from words. He prefers movies instead.

For more information about Billy Baldwin and his books, visit billybaldwinstories.com.