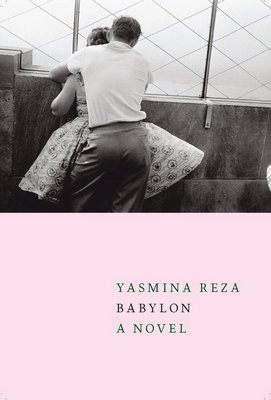 Yasmina Reza is a French playwright who is best known in this country for her plays “Art” and “God of Carnage.” However she is also a brilliant novelist. In her latest novel, “Babylon” (Seven Stories Press. 203 pp. $23.95) she explores themes of exile [“By the rivers of Babylon” as the psalm laments ”we sat and we wept”] and the futility of existence, and introduces a violence that lurks beneath the bourgeois exterior.

“Babylon” is highly regarded in France, where it won the Prix Renaudot and was short-listed for the Prix Goncourt. “Babylon” is translated by Sagaponack’s Linda Asher, who was a long time fiction editor at the New Yorker. Asher has translated Victor Hugo, Balzac, Simenon, and Milan Kundera, among many others. While this non-French-speaking reviewer cannot vouch for the exactness of the translation, the English rendering is precise and crystalline. Asher has been awarded the Scott Moncrieff, Deems Taylor, and the French-American/Florence Gould translation prizes. She is a Chevalier of the Order of Arts and Letters of the French Republic.

The novel takes place in a Paris suburb where Elisabeth, whose mother has died 10 days earlier, is organizing a cocktail party for friends, co-workers and neighbors, a celebration of spring on its first day. Elisabeth is a patent engineer at the Pasteur Institute. Her husband, Pierre, is a professor of mathematics. Elisabeth has just discovered behind her bookshelves, a book of photographs by Robert Frank, “The Americans.”

The book and especially one of its pictures, that of a solitary young man passing out a Jehovah’s Witness pamphlet, have a powerful effect on Elisabeth. The subject is surely dead by now, she thinks. And this leads to a meditation on death and a foretelling of what is to come.

“We didn’t know it [time] was irretrievable. Today I’m sixty-two years old. I can’t say I’ve figured out how to be happy in life. I couldn’t give myself a score of fourteen out of twenty, when I come to die, like that colleague of Pierre’s who said ‘Well--maybe fourteen out of twenty,’ I’d give myself maybe a twelve, because less would look ungrateful, or hurt someone. I’d cheat and say twelve out of twenty. When I’m in the ground what difference will it make? Nobody will care whether or not I managed to be happy in life, and I won’t much care either.”

There is a great deal of foreshadowing throughout the book which this reader didn’t realize until a second reading. It is subtle and has a cumulative effect.

The description of the dinner party involves the usual fastidious preparations: How many chairs? what kind of glasses? What shall the guests bring? There are small details about the lives of the guests, including Elisabeth’s sister, who has a new boyfriend with a taste for leather and leashes.

Also among the guests were Elisabeth’s neighbors, Jean-Lino Manoscrivi and his wife Lydie. Jean-Lino was not a close friend, but he and Elisabeth met frequently on the way to work and had coffee.

He even invited Elisabeth to join him at the race track. Lydie was a jazz singer and Jean-Lino once invited Elisabeth and Pierre to hear her sing. She was also “some sort of New Age therapist who used to manage a shoe store.”

During the course of the cocktail party Lydie expressed doubts about a chicken loaf. Was it made from free-range chicken? Jean-Lino teases her and describes her ideal chickens as being so free-range that they are “fluttering in the trees.”

But it is post-party that Ms. Reza’s unique blend of farce and tragedy reaches new heights. The couple had had an argument over the chickens and in the middle of the night Jean-Lino awakens Elisabeth and Pierre to reveal that he has strangled Lydie to death. There is an almost Marx brothers routine to dispose of the body, until they settle on a large suitcase. The police questioning has the chill of reality.

Imagine “Mrs. Dalloway” as written by Albert Camus and you will get a sense of the spirit of the book. The exile suggested in the title is an internal exile from happiness and a retreat from basic human feeling. “Babylon” is a memorable and disturbing novel and comes as close to perfection as her play, “Art,” does.