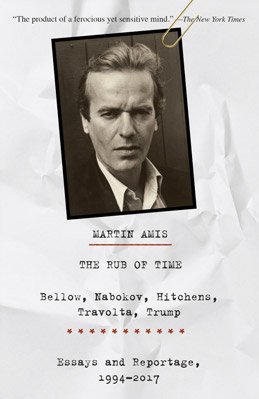 'The Rub of Time' by Martin Amis.

Martin Amis is one of the most interesting novelists writing today. It should come as no surprise that he is also a superb journalist with a penetrating vision and a wonderfully allusive and cliché-free prose style. (A previous collection by Mr. Amis was titled “The War Against Cliché.”)

The range of his interests is evident in the subtitle of his latest collection of journalism, “The Rub of Time: Bellow, Nabokov, Hitchens, Travolta, Trump: Essays and Reportage, 1994-2017.” (Knopf, $28.95, 393 pp.) In the space of a brief review one cannot do justice to the multiplicity of his subjects, but it is possible to dip one’s bucket into the ocean of his prose. Mr. Amis is always interesting, no matter how intrinsically uninteresting his subject. Do we need to read about John Travolta? Or competing in a poker tournament in Las Vegas? Or the porn industry in California? Or Donald Trump, whose ignorance and venality have already earned thousands of pages of newsprint, millions of words of television commentary, and a library of books? We read these pieces because it is Martin Amis who has written them, and he is incapable of writing a boring sentence.

Mr. Amis is at his best as a literary critic. He is a celebrant of what is worthy in contemporary literature. Of Iris Murdoch, for instance, he says, “Her performance has the rarest quality known to any art—that of apparent inevitability.”

Mr. Amis, who lives in Brooklyn and summers in East Hampton, is the son of the novelist Kingsley Amis and has written brilliantly about his father’s friend, the poet Philip Larkin. Larkin’s star has taken a nosedive since publication of his correspondence and a biography by Andrew Motion. Mr. Amis has drawn the distinction between the life and the work. Says Mr. Amis: “Larkin’s life was a pitiful mess of evasion and poltroonery; his work was a triumph. That’s the one to choose if (as he believed) you can’t have both. The life rests in peace; the work lives on.”

The work is simply stunning. No matter how sordid his private life, the words of the man who wrote “What remains of us is love” will continue to resonate with lovers of poetry.

Mr. Amis continues: “And let it be emphasized that Larkin is never ‘depressing.’ Achieved art is quite incapable of lowering the spirits. If this were not so each performance of ‘King Lear’ would end in a Jonestown.”

“Larkin, often, is more than memorable. He is instantly unforgettable.” His is “a voice that is part of our language.”

Mr. Amis’s “Twin Peaks” are the novelists Vladimir Nabokov and Saul Bellow. The sheen of Nabokov’s prose and the precision of his observation of émigré and American life move him into Mr. Amis’s pantheon. They are, incidentally, qualities that Mr. Amis’s work shares. And even though many critics found Saul Bellow’s final book, “Ravelstein,” disappointing. He describes it as “a masterpiece with no analogues.”

He writes of a diminution of power in the last stories of John Updike, published as “My Father’s Tears.” But he describes all the qualities that made Updike the master that he was. “Updike’s prose, that fantastic engine of euphony, of first-echelon perception and of a wit both vicious and all-forgiving, has in this book lost its compass.” He admitted that if Updike were still alive he would not have written the review.

He has a wry take on some of the past presidential candidates.

On Mitt Romney and his abstemious habits: “… is Mitt the kind of guy you’d like to have a glass of water with?”

“Rick Perry’s ‘Oops’ sounds even worse—even more sheepish and abject—if you say it with a Texan accent: something like ‘Ewps.’ It was certainly an arresting moment, and not just for Governor Rick Perry and his numerous handlers, sponsors, investors, and depositors. When was the last time a would-be emperor denuded himself in the space of a single syllable?”

He also ventures into commentary on British politics and the leader of the opposition, Jeremy Corbyn, finding him to be unintelligent and devoid of a sense of humor.

Mr. Amis saves his best for Donald Trump, whom he finds, like Corbyn, without humor.

Of Trump he says, “There’s nothing there. No shame, no honor, no conscience, no knowledge, no curiosity, no decorum, no imagination, no wit, no grip, and no nous [common sense or practical intelligence]. Into this spotlessly empty vessel certain Americans contrive to pour their anger, their resentments, their ambitions, and their hopes. How is it done?”