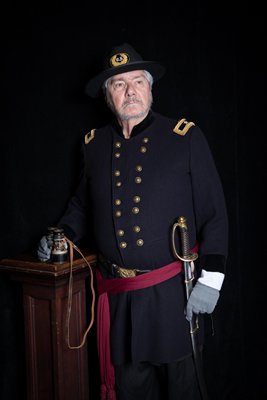 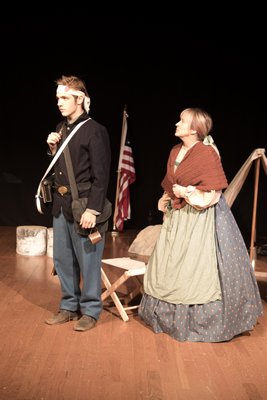 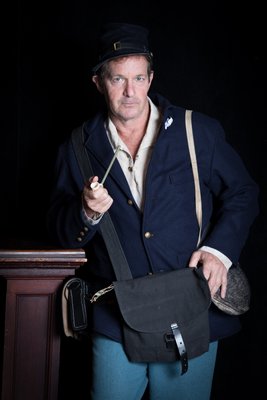 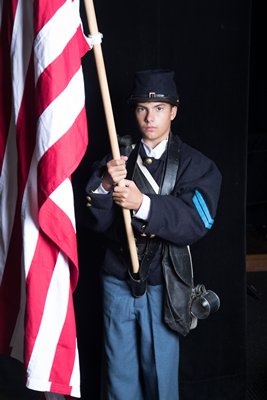 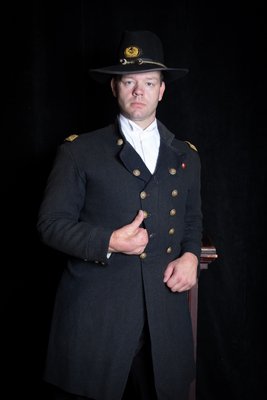 On a recent Thursday night, the cast and crew of Boots on the Ground Theater’s upcoming production gathered at the Southampton Cultural Center. As he waited for rehearsal to begin, Ethan Suhr tried on some dark blue pants, a coat with a matching cap and a pair of plain leather boots.

When he was done, Ethan, a freshman at Southampton High School, had been transformed into Billy, a flag bearer for the Union Army.

Boots on the Ground’s stage adaptation of “The Red Badge of Courage,” based on Stephen Crane’s 1895 Civil War classic, opens on Friday, October 19, at the Southampton Cultural Center with a script by playwright Catherine Bush. This production comes on the heels of the company’s successful spring production of “The Miracle Worker.” Ethan is the older brother of Emma Suhr, the young actress who starred as Helen Keller in that play.

Directing this play is Josephine Teresi-Wallace. She is a familiar presence on the cultural center stage, having acted alongside Ms. Grice in productions there under the direction of Michael Disher. But this show marks Ms. Teresi-Wallace’s directorial debut.

“Immediately after I read it, I started envisioning what I would do with it on stage,” she said.

The book tells the story of 18-year-old Henry Fleming, a Union soldier from a New York battalion who has enthusiastically enlisted for the Northern cause. Yet when confronted by his first real battle, he is suddenly paralyzed with fear and self-doubt. As he struggles with his emotions, he hears the words of his mother, who encouraged him to fight bravely as she sent him off to battle.

“It’s an exploration of war—some say it’s Crane’s anti-war statement—delving into the realism of war juxtaposed with a young boy’s feeling of guts and glory,” explained Ms. Grice, who plays Henry’s mother. “He enlists and then he sees reality.”

Ms. Grice said she was looking to follow up “The Miracle Worker” with a play that was both classical and historic.

“I wanted to stay in the 19th century as much as possible,” said Ms. Grice, a fan of literature and culture from the Victorian era who credits husband Steve Gould with suggesting “The Red Badge of Courage.” Though she liked the idea, she was unsure if a stage version of the book existed. After searching online, Ms. Grice was pleased to come across this adaptation, which has had only one previous run at the Barter Theater in Virginia ,where Ms. Bush is playwright-in-residence.

“This is the Northern premiere,” Ms. Grice said.

While “The Red Badge of Courage” is a battlefield story that addresses the notion of patriotism, it isn’t one that praises the glories of war. Instead, this is a complex and deeply personal journey of the inner struggle experienced by one conflicted individual in the heat of the moment. At it’s core, it delves into the often contradictory emotions experienced by young men—and now, increasingly, young women—who serve their country in battle, whether in a conflict pitting North against South, or a war being waged halfway around the world.

“I love that Crane had no fear to dive into this—talking about emotions and fear and cowardice and what bravery really is,” Ms. Teresi-Wallace said. “It’s about real emotions and men don’t like to talk about that. But to me, the biggest strength we can have, especially men, is vulnerability.

“What Stephen Crane did was open that window to say, ‘This is what these boys are feeling,’” she added. “Courage is so elusive. … You don’t know what it’s like until you’re in that situation. They’re entering war as little boys and coming home as full grown men, and they are carrying the repercussions with them their whole life.”

The conflict waged between bravery and fear is embodied in young Henry, portrayed in this production by Pierson High School freshman Thomas Schiavoni. To serve honorably, facing the enemy come what may, or to run away in cowardly retreat—these are the choices that Henry grapples with as his mother’s encouraging words to fight with valor swirl in his head.

“The movies I’ve seen about war are often about the average guy. Henry is the average guy, but on another level,” Thomas said. “I’d be terrified. I wouldn’t know what to do. Should I risk my life?

“American nationalism has encouraged people to go into the army. But in this, you can see what there is to fear,” he added. “People who haven’t been in war don’t really know what’s happening.”

One actor in this show who really does understand the war experience is Chris Levi, a double amputee who served in Afghanistan in 2006 and 2007 and went on to Iraq where, on March 17, 2008, he lost both his legs.

“I have to say that though I had heard of ‘The Red Badge of Courage’ prior to the production, I couldn’t place it as happening in the Civil War,” said Mr. Levi, a Melville resident who plays a tattered soldier who Henry encounters at the end of a column of injured men. “Even though the war is entirely different, the people are the same. The characters existed when I was in the war.

“You have younger guys who are naively ambitious and seasoned older guys,” he added. “The story of Henry is the story of anybody who has had something they could look back on which either broke them or made them a better person going forward.

“The Red Badge of Courage” by Boots on the Ground Theater runs October 19 to November 4 at the Southampton Cultural Center, 25 Pond Lane, Southampton Village. The cast also includes Richard Adler, Robert Nelson, Mitch Selden and Deyo Trowbridge. Shows are Fridays and Saturdays at 7 p.m. and Sundays at 2:30 p.m. with a special 6 p.m. performance on November 4 to honor military service members. All veterans and their families will be admitted free. Veterans should email Kirsten Lonnie at klonnie@scc-arts.org to reserve seats in advance. General admission tickets are $25, $12 for students age 16 and under.

In addition to regular performances, “The Red Badge of Courage” will also be presented for free to students in grades 5 through 8 from the Tuckahoe and Hampton Bays schools on October 30 and November 4, respectively.

During the run of the play, there will be an exhibition of Civil War memorabilia on display in the Cultural Center’s gallery. Curated by Stephen Gould, the exhibition highlights the Civil War service of Hampton Bays’ Alonzo Foster, a soldier in the 6th New York Cavalry Regiment who was wounded in action in 1864. The exhibition is being offered in collaboration with the Southampton History Museum.