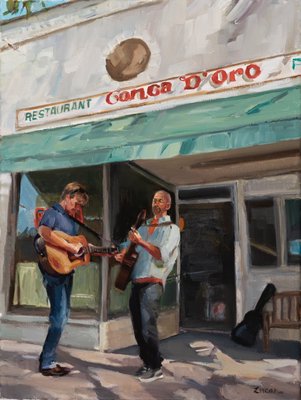 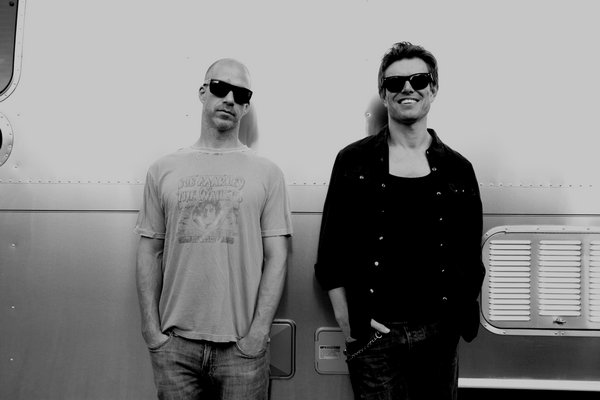 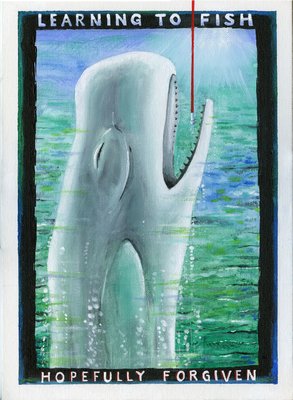 Album artwork by Billy Mawhinney for 'Learning to Fish' by Hopefully Forgiven.

Throughout most of last winter, musicians Brad Penuel and Telly Karoussos, who are collectively known as the band Hopefully Forgiven, met up in Mr. Penuel’s newly built home studio in Sag Harbor with the express purpose of recording their original music.

But putting out a new album can be tricky, and there were complications along the way—primarily, geography. That’s because while Mr. Karoussos is an Amagansett resident, Mr. Penuel lives and works in New York City during the week, which means their studio sessions were limited to weekends.

The two set a goal of recording one song per week, and when Hopefully Forgiven appears at the Sag Harbor American Music Festival next Saturday, Mr. Penuel and Mr. Karoussos will have several reasons to celebrate.

Nine of them, to be exact.

That’s the number of tracks on “Learning to Fish,” their new album, and the duo’s Saturday, September 29, performance under the festival tent at Dodds & Eder will double as a release party for the project.

As if that weren’t enough, Mr. Penuel and Mr. Karoussos are also the musicians depicted in Maryann Lucas’s painting that is the image on the official 2018 Sag Harbor American Music Festival poster. The painting shows the two playing in front of Conca D’Oro, the much beloved pizza parlor that changed hands this year and reopened as Sag Pizza.

On a recent Sunday afternoon, Mr. Penuel and Mr. Karoussos were found playing again at c/o The Maidstone Inn in East Hampton, where they were performing an acoustic set. When asked if the goals of their winter recording sessions came to fruition, Mr. Karoussos admitted, “The song-a-week thing didn’t exactly pan out. Some songs came out in one take, while a couple of others were totally painstaking.”

“But I think the goal put us in a right frame of mind to work,” Mr. Penuel added. “We were busy, and there were so many variables. In the end, we’ve got nine songs, and the cool thing is we got the content recorded at the studio in my place.”

If the title of their album “Learning to Fish,” sounds familiar, it’s because it’s a nod to “Learning to Fly,” the song by the late rocker Tom Petty, who died in October last year.

“We built the studio and we learned how to record ourselves, and then we did the bulk of this project ourselves,” he continued. “When you do that and feel you’ve done it well, it’s great.”

Another point of celebration for the duo is the fact that their new album was mixed by Zach Hancock, the chief engineer of prestigious Downtown Music Studios in New York City.

“We were introduced to Downtown Music Publishing through a friend who is a successful recording artist. They’re a legit organization in the music business, and they deal with major recording acts,” explained Mr. Penuel. “They heard our stuff, liked it, and the head of the studio brought us in and finished it up for us.”

Though the company typically works with big-name recording artists, Mr. Penuel notes that Mr. Hancock was attracted to the Hopefully Forgiven project because of his appreciation for the old-school way in which the tracks were recorded—with the musicians playing together in one room.

“It was a fortuitous thing that happened, and it took the project to a new level,” Mr. Penuel said. “I’m psyched to have this be a thing we conceived, had a goal of a recording a song a week, executed it, and came out the other side with a finished honest-to-God product I’m super proud of.”

Hopefully Forgiven has developed a loyal local following in recent years, and no doubt much of the appeal can be traced to the diversity of the music they play. With influences that can lean a little bit country or a little bit rock ’n’ roll (with a lot in between), Mr. Penuel and Mr. Karoussos are reluctant to assign an absolute label to their unique style. But they can easily perform a set on either electric or acoustic guitars, which Mr. Penuel notes makes them a popular choice for the owners of local venues who appreciate their flexibility. Baron’s Cove, Wölffer Wine Stand and Swallow East, in addition to c/o The Maidstone, are just a few of the places where they can regularly be heard on the East End.

“It’s all kind of American music. There’s more rock in it, too. Some ballads and slow stuff and a couple up-tempo things,” Mr. Penuel said in describing their sound. “It’s not really country, and it’s not really hard rock—we trim off the extreme ends.”

Much of their taste in music can likely be traced to where they both were raised—Mr. Karoussos is from Long Island, while Mr. Penuel grew up in Alabama. The fact that the two met at all was something of a fluke and came about thanks to Craigslist when Mr. Penuel and his wife, Andressa Costa, placed an ad looking for someone to watch their pets in their Williamsburg apartment while they traveled abroad.

The arrangement turned out to be ideal for Mr. Karoussos, who, at the time, was looking to get away from the East End for a while and explore the music scene in the city. He answered the ad, got the job, and while staying in the apartment couldn’t help but notice that the décor was dominated by guitars and surfboards—which told him that he and Mr. Penuel had at least two things in common.

The friendship and musical partnership began from there and within a few years Mr. Penuel and his wife left Brooklyn for Sag Harbor, where he and Mr. Karoussos started performing as a duo—on weekends at least. It’s a partnership that has been working ever since, despite—or perhaps because of—their personal styles.

“Brad and I are completely different in the way we approach things,” Mr. Karoussos said. “With Brad, everything has a plan. Which is good because if it was up to me it would never happen. Organization is not my forte. The one who calls me out the most as being flighty is our bass player, Benjamin Goodale. He’s more flighty than me, and we all work well together.”

“I think we’re about as different as we could be, and come together through the music,” Mr. Penuel added.

Though original music is the focus of “Learning to Fish,” and it’s what they love to do, Mr. Karoussos and Mr. Penuel are not averse to mixing covers into their live sets and realize that many people like to hear them at live music venues. But when they do perform cover songs, the musicians in Hopefully Forgiven make an effort to do them in their own totally unique way.

“We played this Taylor Swift song the other night, and after the show, this woman came up to me and said that it was awesome. She said, ‘I thought it wasn’t going to be great, but you put your own spin on it,’” Mr. Penuel said. “Sometimes playing covers is the best way to work in the original music.”

“We got a nice letter from one of our fans. She and her husband are at every single show,” Mr. Karoussos added. “She said, ‘You’re always doing your own stuff and mixing in the cool covers and different styles of music.’”

“Now people are asking for our original songs,” Mr. Penuel said with a grin.

Seems that’s yet one more thing worth celebrating these days.