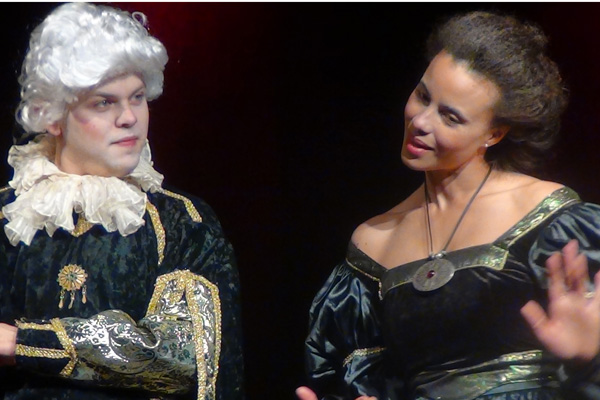 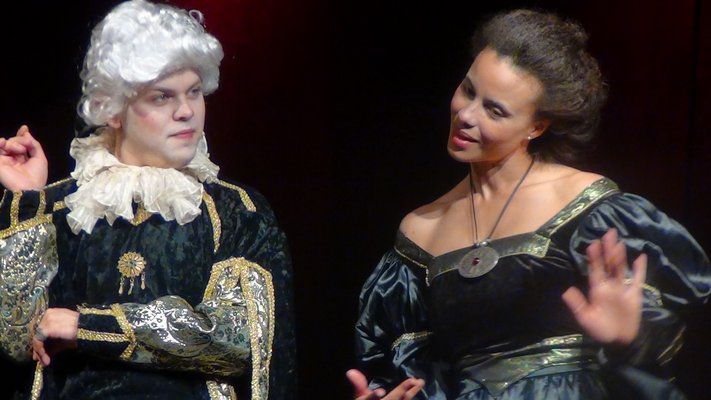 “I’m so nervous,” said “Buckingham” playwright and director Tina Andrews as she studied her reflection in the bathroom mirror moments before what should have been curtain at the Southampton Cultural Center on Friday night.

Her worry was unfounded, as the production was a rousing success.

It began with her beautiful and brilliant writing about the unusual betrothal of the biracial Princess Charlotte Sophia Frederick of Mecklenburg-Strelitz, Germany, who hid her “dusky Moorish” complexion with chalk, and England’s King George III, who is best known today as “Mad King George.” The marriage was held by proxy, after an exhaustive effort was made to find an acceptable bride in order for the newly minted king to hold the throne, as well as his vast lands in the United Kingdom of Great Britain and Ireland.

In her play, told magnificently and with much wit, Ms. Andrews manages to not only entertain but to educate as well. This is a fascinating story and one on which this reviewer would place a heavy wager that it will be headed for broader viewership via a Broadway or off-Broadway stage. It’s that good.

The words on the page aside, “Buckingham” abounded with solid performances by a strong ensemble cast. Headed by the luminous and immeasurably talented Parisa Fitz-Henley (this girl is definitely going places) as Princess Charlotte Sophia, the cast contained a perfect combination of popular familiar faces and talented Manhattan-based actors in key roles.

Locals included Seth Hendricks as the lusty ladies man King George III, in perhaps his best-played role to date; Matthew O’Connor as the droll and perfectly cast Lord Bute; Vay David as the relentlessly pushy Duchess Elizabeth (a big acting stretch, well done, as Ms. David is delightful in real life); and Adam Fronc as the wildly entertaining “sodomite” Grand Duke Adolph, who provided many memorable moments of comic relief. Alexandra Cohen-Spiegler returned to the SCC stage as Lady Sarah (nary a beat was missed for this enchanting lass with the Irish accent) for this production after debuting in “The Mistress of Monticello” in February, and Tony D’Alessio, who also acted in “Mistress,” was utterly convincing as the “idiot nephew” (and that’s a compliment!) Wilhelm Albertina.

There is not enough space to allow for the many compliments earned by Ms. Fitz-Henley, who also played the lead in “Mistress.” This woman is a shining star, and gave one of the three best performances scene on the local stage in recent memory. Truly outstanding work deserving of a million standing ovations.

Other talented out-of-town-based actors included Neyssan Falahi, who was utterly charming and believable as the composer Johann Christian Bach; Ingrid Griffith, who clearly put her heart and soul into Lena, with tremendous payoff; and Thandiwe Thomas de Shazor, whose portrayal of Jon was charming and heartbreaking, truly well done.

Of course, the production was also elevated by the directing choices, attention paid to the luxurious period costumes, minimal yet effective set design, and spot-on lighting and sound engineering. Great work done by all.

There was one major misstep, though, which unfortunately must be addressed. The curtain was held a full half hour (actually 27 minutes but you get the gist), not because of any actor or technical difficulty but because a handful of audience members were stuck in traffic. Note to those in charge of production: if you have seriously set your gaze upon the larger stage then you need to treat this work as a professional production, not like some backyard barbecue you are holding for your friends and family. By holding the curtain for a select few, you sent the message to those good people who spent their money and made the effort to be on time that they don’t matter. It was rude and disrespectful. Absolutely unacceptable.

Bottom line: An incredible story, with brilliant acting. Not to be missed.

“Buckingham,” written and directed by Tina Andrews, will continue to stage at the Southampton Cultural Center on Friday and Saturday, May 10 and 11, at 8 p.m. and Sunday, May 12, at 2:30 p.m.

Tickets are $22 general admission and $12 for students under 21. Reservations can also be made at scc-arts.org.