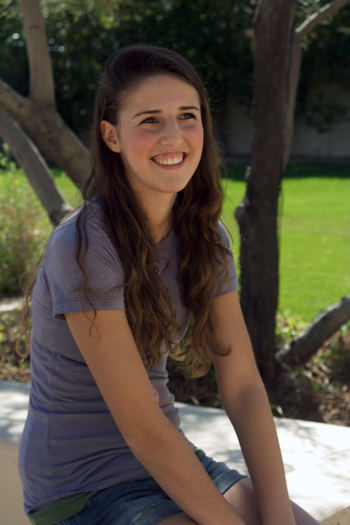 Danica Ciccariello of East Hampton on the set.

One might assume that Brenda Siemer Scheider came to direct “In My Hands,” a documentary on Marfan Syndrome, because she lives in Sag Harbor, as does Priscilla Ciccariello, who almost 30 years ago founded the National Marfan Foundation. But the two women did not meet until the film was being prepared, and its origin can actually be traced back four decades.

As Ms. Siemer related in an interview in the company of Ms. Ciccariello last week, she shared an apartment in New York with another young aspiring actress, Ann Reinking, and they became close friends. Over time, Ms. Reinking secured parts as a dancer in theater and film, often directed by Bob Fosse. “It’s funny,” Ms. Siemer said, “that Annie invited me to visit the set of ‘All That Jazz,’ but I didn’t go. I would have met Roy a little earlier,” referring to the actor who played a character based on Mr. Fosse in the film, Roy Scheider, who died last year.

As it happened, a year after “All That Jazz” came out—and Mr. Scheider had been nominated for a Best Actor Oscar—Ms. Siemer happened to meet him in a drugstore and she mentioned the connection to Ms. Reinking. Before long, she and Mr. Scheider were married, and in turn she introduced Ms. Reinking to her future husband. The two women gave birth to sons in the same month.

“My son grows up fine, he’s everything Roy and I want him to be,” recalled Ms. Siemer. “But as a child, Annie’s son, Christopher, had hands as long as mine are now. We used to comment that he was going to be a great pianist. As he grew up, she kind of hid what was going on with him. He wasn’t diagnosed as a child. Most people, and even many doctors, didn’t know there was such a thing as Marfan Syndrome.”

Ms. Ciccariello added, “Even those who did, many did not tell the parents because there was no cure for it. What can they do about it anyway, was the attitude.”

“It was many years before Annie fully learned about the disease and came to terms with it,” Ms. Siemer continued. “In the meantime, she’s on Broadway, she’s in ‘Chicago’ and other productions, she’s out every night and coming home after midnight, her husband gets Christopher up for school every morning—if it’s not in your face and there isn’t an immediate problem, you tend to just go along thinking life’s okay.”

Marfan Syndrome is a genetic disorder of the connective tissue. Its symptoms can appear in different parts of the body, but many who suffer from it have eye, heart, and joint problems. The gene that causes the disease was discovered by researchers only 18 years ago, and it is now estimated that as many as one in 5,000 have Marfan Syndrome.

Medical historians believe that among those who had it long before it was discovered were Abraham Lincoln and Charles de Gaulle. The most  dangerous aspect of the disease is the potential for a rupture of the aorta,  the artery that carries blood from the heart. Until recently, Marfan Syndrome was viewed as a fatal disease. Today, thanks to the development of medications and enhanced monitoring of  the heart, those with the disorder can have normal life expectancy.

Ms. Siemer and Ms. Reinking had previously collaborated on a documentary about young women and body image. When Ms. Reinking, who now lives in Phoenix, decided to attend a conference at Stanford University for children with Marfan Syndrome and their parents, she also committed to producing a documentary if Ms. Siemer would direct.

“I jumped in because I was glad that Annie wasn’t in denial anymore,” Ms. Siemer said. “And once she went, she got totally into it. She found out, as one person in the film puts it, that her family was not ‘terminally unique’ but that there are other families in this country wrestling with this disease. As I was preparing to do the film, I of course contacted the National Marfan Foundation for information. And someone there said, ‘By the way, the founder of this foundation lives in your home town, Sag Harbor.’ If I didn’t already believe that this film was meant to be, that would have convinced me: she doesn’t live in Minneapolis, but a few blocks away. Once I heard her story, I understood so much more.”

Of Ms. Ciccariello’s seven children, three were affected by Marfan Syndrome and one died from it, as did her husband. Her son John, of Montauk, is interviewed in the film about the impact on his life, including the decision he and his wife had to make about having children. They now have two teenage daughters, one of whom has Marfan Syndrome.

Directing “In My Hands” was an emotional experience for Ms. Siemer because of the poignant content—the young people on camera are quite candid about the psychological as well as physical effects of the disease—and because of her husband’s fierce battle with multiple myeloma.

“On one hand, I shouldn’t have made this film because Roy was ill and we were both involved in getting him well,” Ms. Siemer said. “We were in and out of New York City and back and forth for treatments in Little Rock, Arkansas, and Roy wanted to keep working so he was on location in such places as Poland. Annie was hesitating to go to the conference at Stanford, so I left Roy in Krakow and flew to San Francisco and met up with her and a camera crew in Palo Alto.

“I told her ‘if I can get there from Krakow, you can get there from Phoenix.’ After that, we were both committed. And after Roy died, I didn’t think I could face the task of editing the footage into a film, but doing that was actually very helpful to me, instead of wallowing in despair.”

The result is a powerful film, “In My Hands,” which also shows Ms. Reinking choreographing a dance performance featuring youngsters with Marfan Syndrome. The documentary will be screened on Thursday, October 8, at noon at UA4 in East Hampton, and on Monday, October 12, at 8 p.m. at UA6 in East Hampton as part of the Hamptons International Film Festival. It will be preceded by “Smiles,” a short documentary about Mr. Scheider that Ms. Siemer also directed.