Chris Gloninger Recalls The Hurricane Of ’38 On The Porch 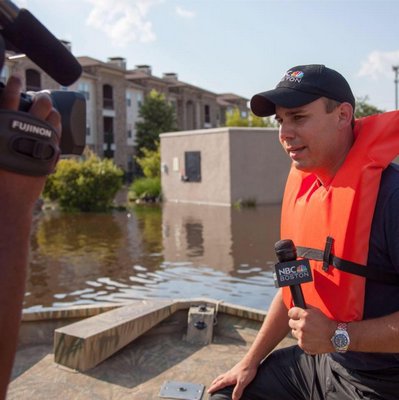 Chris Gloninger is currently a meteorologist at NBC in Boston. But he was born and raised in Sag Harbor and is a graduate of Pierson High School and became interested in weather when Hurricane Bob hit Long Island back in 1991 when he was in second grade.

During his career, he has covered historic flooding, ice floes, tornados and hurricanes, including Irene, Lee, Sandy, Harvey, Irma and Florence, where he broadcast on location in extreme conditions.

During his coverage, Mr. Gloninger became acutely aware of the need for preparation and mitigation to lessen the effects of severe weather on the public, the infrastructure and communities as a whole.

The next in the “Friday on the Porch” series at the Sag Harbor Historical Society will feature Mr. Gloninger with a talk on “The Great New England Hurricane of 1938” on Friday, July 26 at 5 p.m. He will take a look back at how the major hurricane of 1938 changed the East End, from the physical damage to the scars we can still see today.

He’ll also explore what made the storm so powerful and explain why it was so rare. Finally, he’ll take a brief look ahead by outlining what has changed since 1938 and what the hurricane would cost the area today.

“Friday on the Porch” will be held at the historical society’s Annie Cooper Boyd House, 174 Main Street, Sag Harbor. Admission is a requested donation of $20 with complimentary beer, wine and refreshments

Coming up on the porch:

Friday, August 9: “The History of Pie—Sample the Possibilities” by Rev. Karen Campbell