Christine Sciulli drawing in light. COURTESY OF THE ARTIST 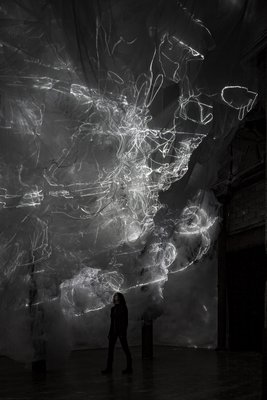 Christine Sciulli in 2016 at "ROIL," her installation at Smack Mellon, Brooklyn. BY PAUL WARCHOl Conrad Hotel and Breezeway between hotel and 200 West 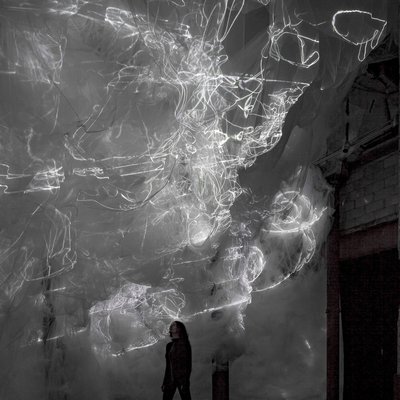 Artist Christine Sciulli in "ROIL" her 2016 installation at Smack Mellon, Brooklyn. BY PAUL WARCHOL Conrad Hotel and Breezeway between hotel and 200 West

Christine Sciulli in 2015 in front of her work "Phase Shift 75-140" at Temporary Storage Gallery, Brooklyn Fireproof, Bushwick. BY TYCHO BURWELL

On a recent Thursday afternoon, East End artist Christine Sciulli was at work in her light-filled Sag Harbor studio when she paused, pulled out a small square of nylon fabric and held it up to the light.

She then touched a large section of tulle hanging in front of one of the windows. Unlike the nylon square, the tulle (a stiff, net-like fabric typically used beneath frilly dresses to give them their flounce) is malleable, largely see-through and, most important for Ms. Sciulli’s purposes, holds its form when manipulated.

“Nylon mesh is luminous so it glows when the light hits it, and other materials do too. But tulle is micro-specific because it’s empty and the light travels through the threads,” she explained. “Tulle also has body. I can pin it and it keeps its volume and shape like sculptural pieces.”

That’s why it’s currently the preferred fabric for Ms. Sciulli’s unique art installations. While others may prefer acrylics, oils or charcoals, this artist’s chosen materials, besides tulle, include string, small white painted safety pins procured on the website “Etsy” by someone known only as “kelleyann47” and, most importantly, a series of strategically placed projectors.

That’s because Ms. Sciulli’s true medium is light, and the sculptural fabric is the canvas, so to speak, upon which the light form is projected. Each of Ms. Sciulli’s art pieces is entirely unique to the location in which it is installed—whether outdoors on the Great Lawn of Central Park, in a Brooklyn warehouse, or even a German cathedral.

On April 20, Ms. Sciulli’s site-specific installation “Phosphene Dreams” goes on view in Guild Hall’s Woodhouse Gallery in East Hampton. As is the case in her other light-based works, the architecture of the room itself will dictate the final composition of the piece.

Putting it into the simplest of terms, Ms. Sciulli’s art involves the projection of circles of white light onto fabric that has been suspended in a voluminous sculptural form in a defined space or darkened room. The circles of light emanating from the projectors expand, contract, fade and brighten, creating an ethereal dreamscape on the surface of the fabric that invites viewers to immerse themselves in the environment by sitting, playing or interacting with the shapes ebbing and flowing around them.

“I try to make people understand that it’s just circles of light to demystify the whole thing,” explained Ms. Sciulli who brings to her art the mind of a mathematician with a degree in engineering. She also holds a fine arts degree from Hunter College and works professionally as an architectural lighting designer, primarily for contemporary homes.

She notes that her interest in light, particularly as an artistic medium, goes back to when she was a child fascinated by candles and sunsets, as well as photographic techniques.

“I got glasses when I was eight and I saw the world as a fuzzy play of light and projections,” explained Ms. Sciulli. “My dad was a shop teacher, and he bought home a bunch of chemicals after they shut down the darkroom. I liked seeing images rising and fading.

“I use white light in my work,” she added. “I started out in black and white photography and there’s nothing like pure shadow and form.”

Another strong influence for Ms. Sciulli was the art of James Turrell, which she came to know while in college in the early 1990s. His work is primarily concerned with light and space, as well as the idea of perception and planes.

More recently, Ms. Sciulli credits a residency eight years ago at the South Fork Natural History Museum as being instrumental in helping to develop the form her artwork takes today. At the time, she had only recently moved to the East End and at the time, was exploring projections working primarily with string, grasses and branches.

“That residency was a catalyst,” said Ms. Sciulli. “I think it was a transition for me.”

A 2013 show at Neoteric Gallery in Amagansett followed the residency and led her to the realization that the use of circular projections was the key to the work. She followed up by using projections of concentric circles and fabric built-out volumetrically in an installation later that year at the Governor’s Island Art Fair.

“I feel like my career has gotten more focused and I’ve gotten more exposure since I’ve been here,” said Ms. Sciulli.

Ms. Sciulli’s staying quite busy these days and the upcoming Guild Hall show isn’t her only exhibition this year. She has a piece on view through April 20 at Herron School of Art + Design in Indianapolis, and in September, another site-specific installation will go on view at Dalhousie Gallerie in Halifax, Canada.

When asked how audiences react to her work, Ms. Sciulli said that because the work is abstract, reactions vary. Some people, she notes, quickly walk in and out of the space while others spend time enjoying the immersive experience. Some, she admitted, even get vertigo.

One thing that doesn’t change, however, is the nature of light and the signature form it takes in her pieces … the circle.

“A circle is the same whether it’s a tiny dot on the floor, or as big as a planet,” she said

Christine Sciulli’s site-specific installation “Phosphene Dreams” will be on view April 20 to May 27 in the Woodhouse Gallery at Guild Hall, 158 Main Street, East Hampton. Curated by Christina Strassfield, the show opens with a private member’s reception on Saturday, April 20 from 5 to 7 p.m. For more information visit guildhall.org.