‘Clearing The Air’ At SAC Explores The Healing Power Of Art 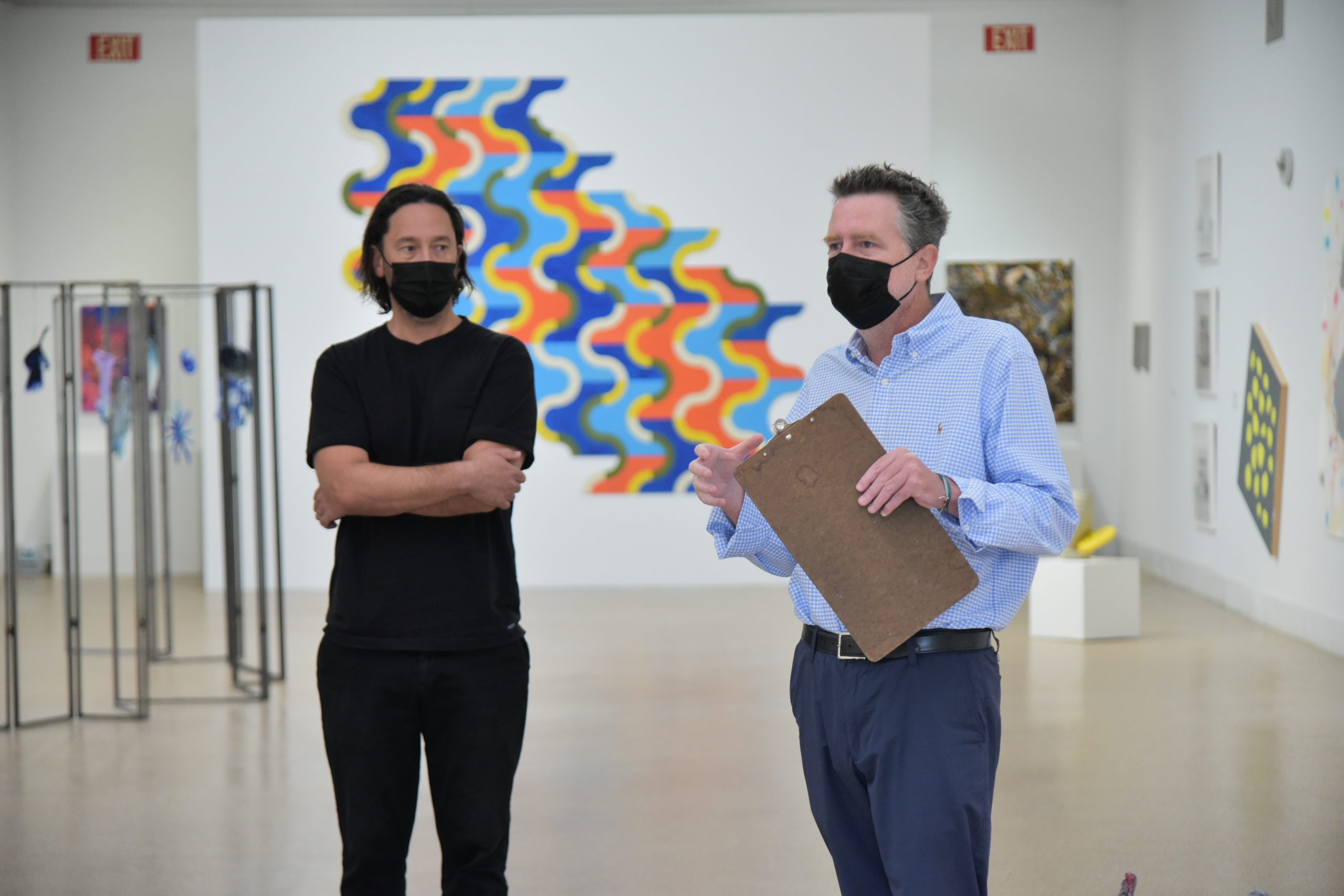 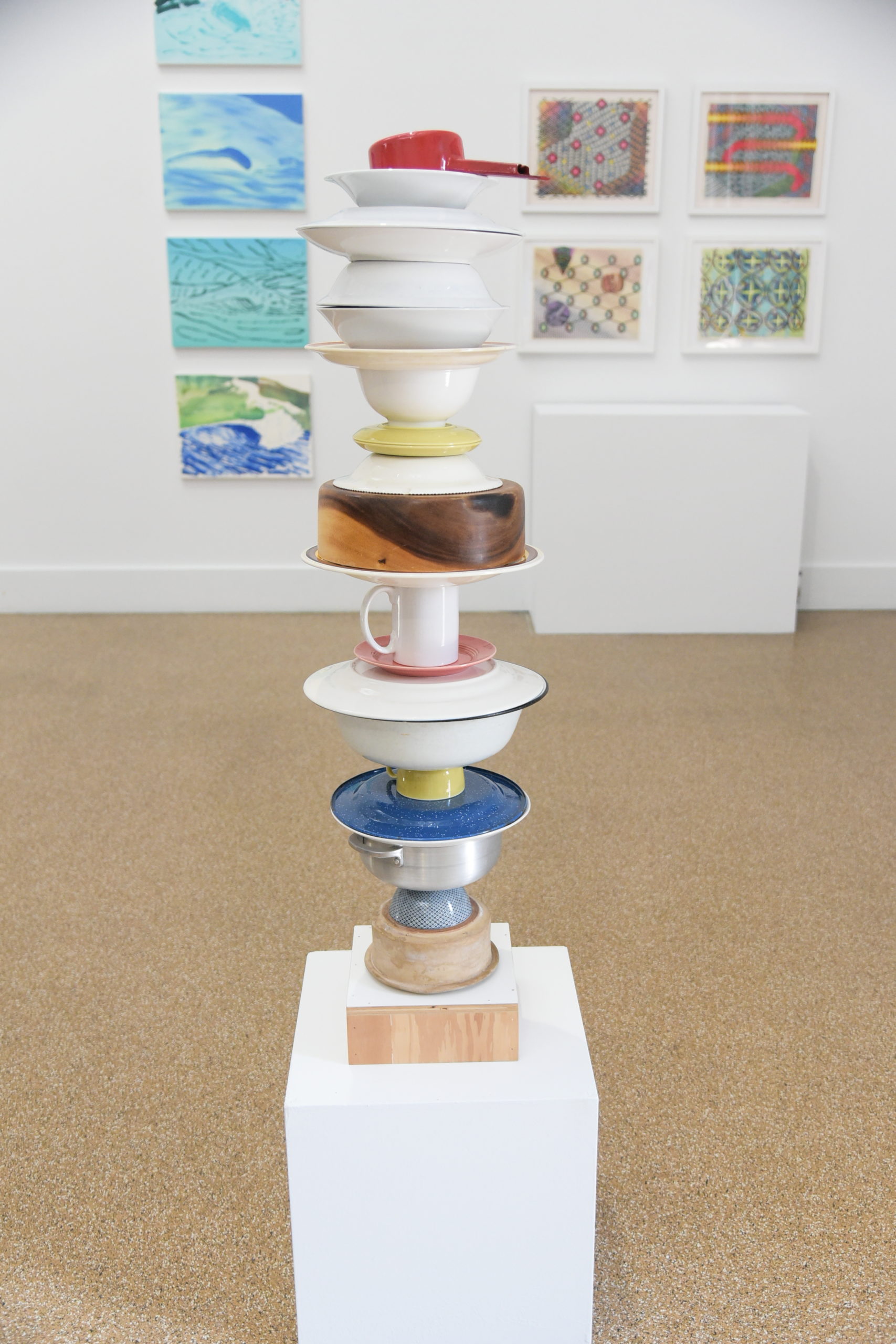 "Clearing The Air" curator Jay Davis and SAC's executive director Tom Dunn during a tour of the exhibit. ROB RICH 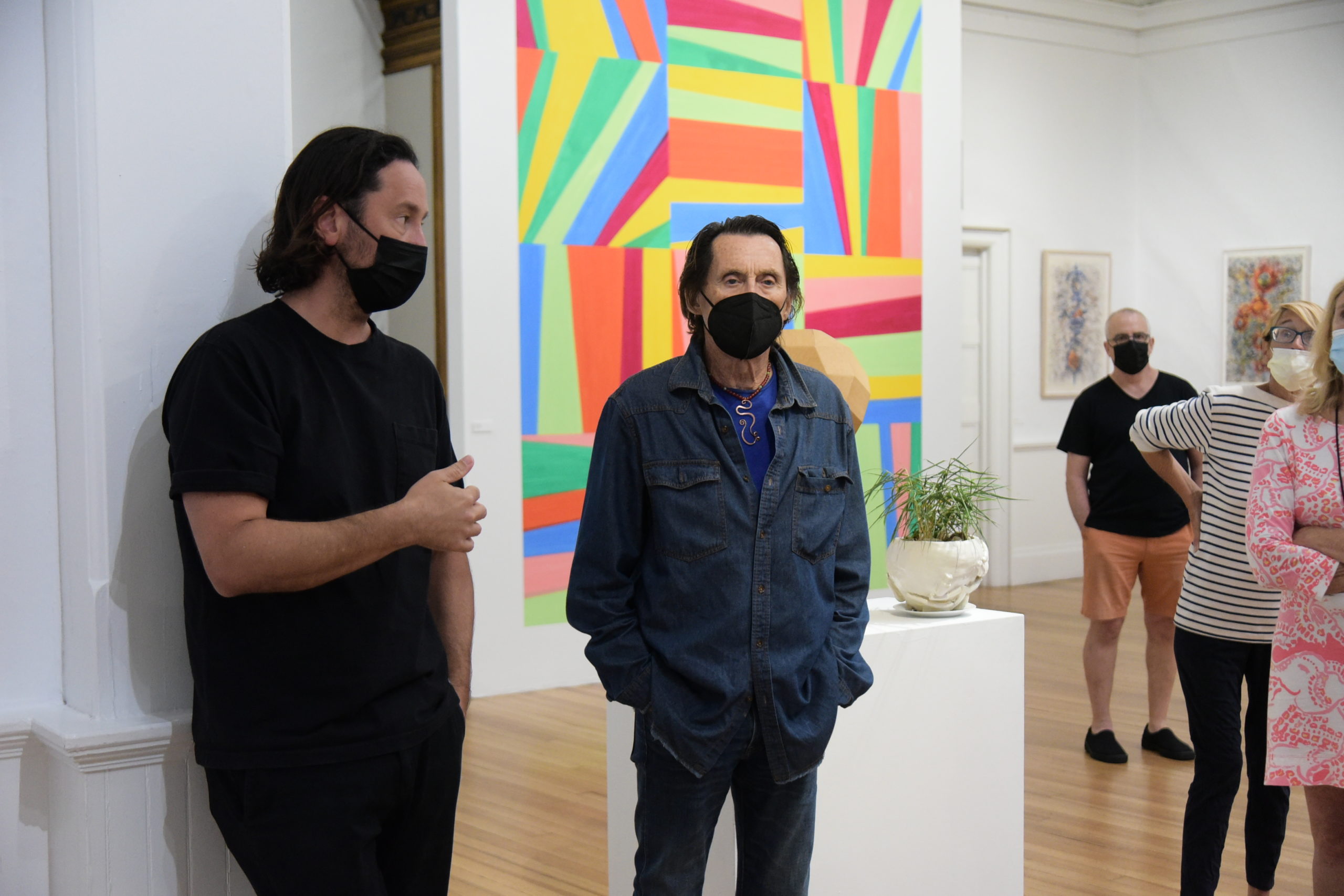 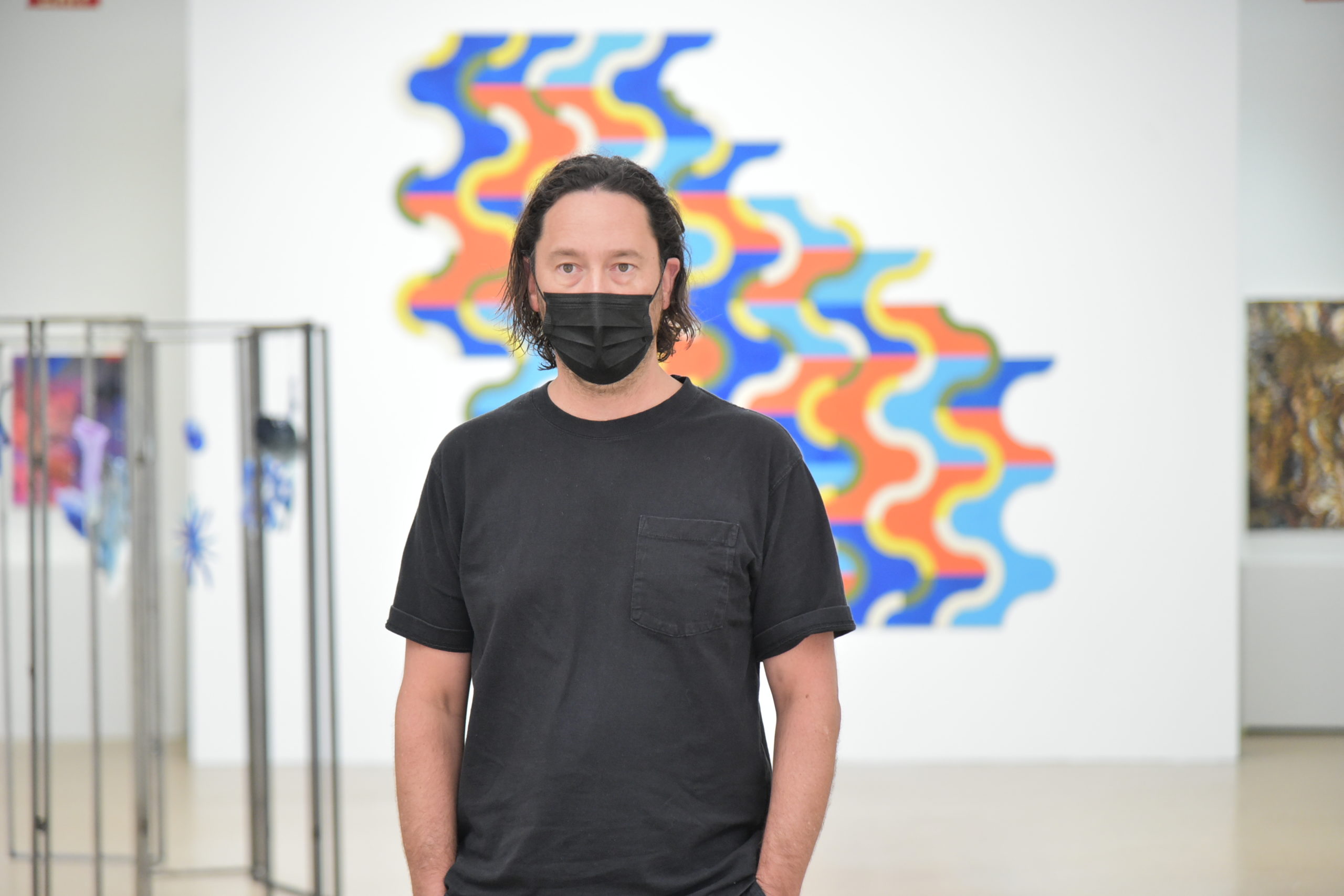 "Clearing The Air" curator Jay Davis during a tour of the exhibit at SAC. ROB RICH 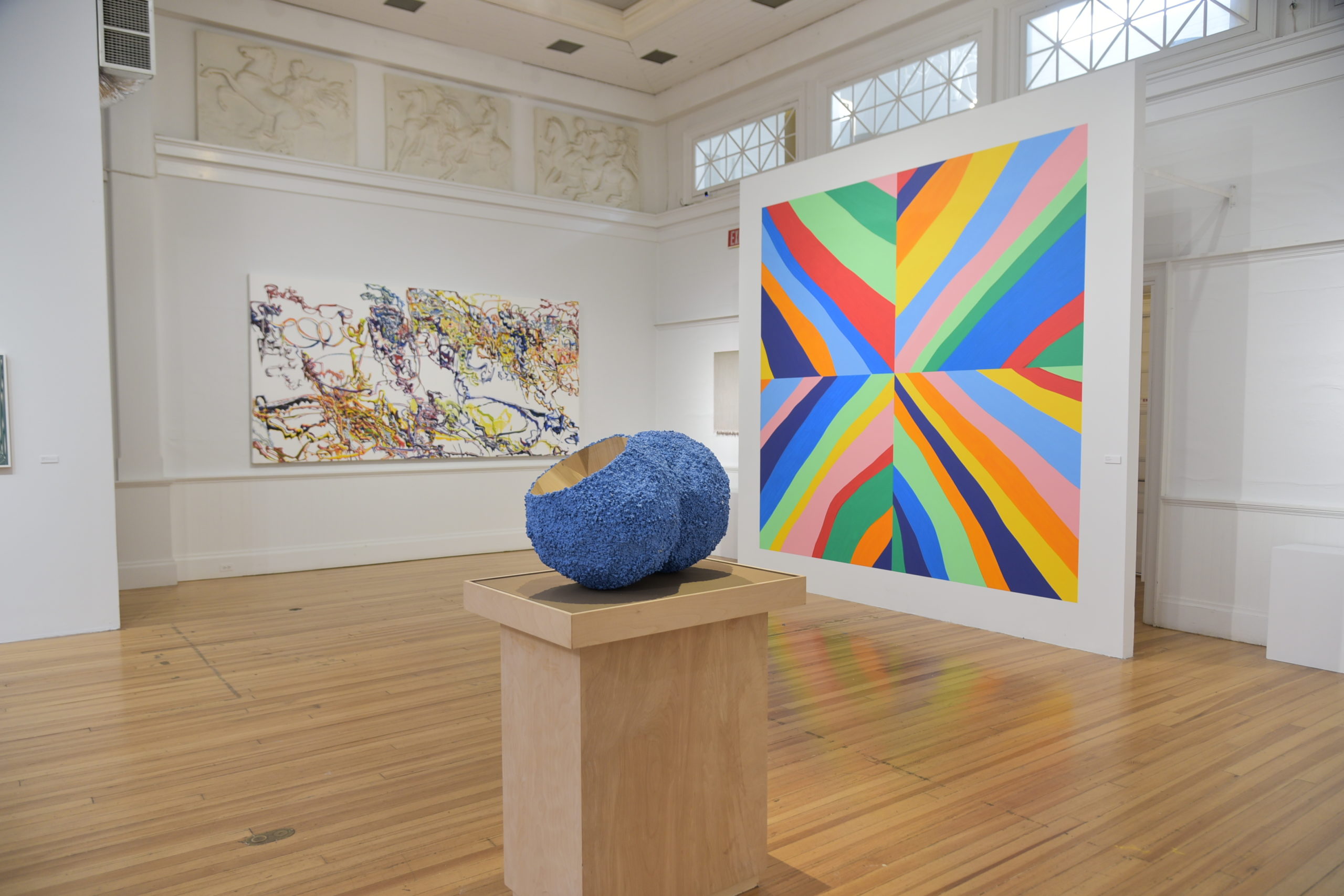 Installation view of "Clearing The Air" at SAC. ROB RICH 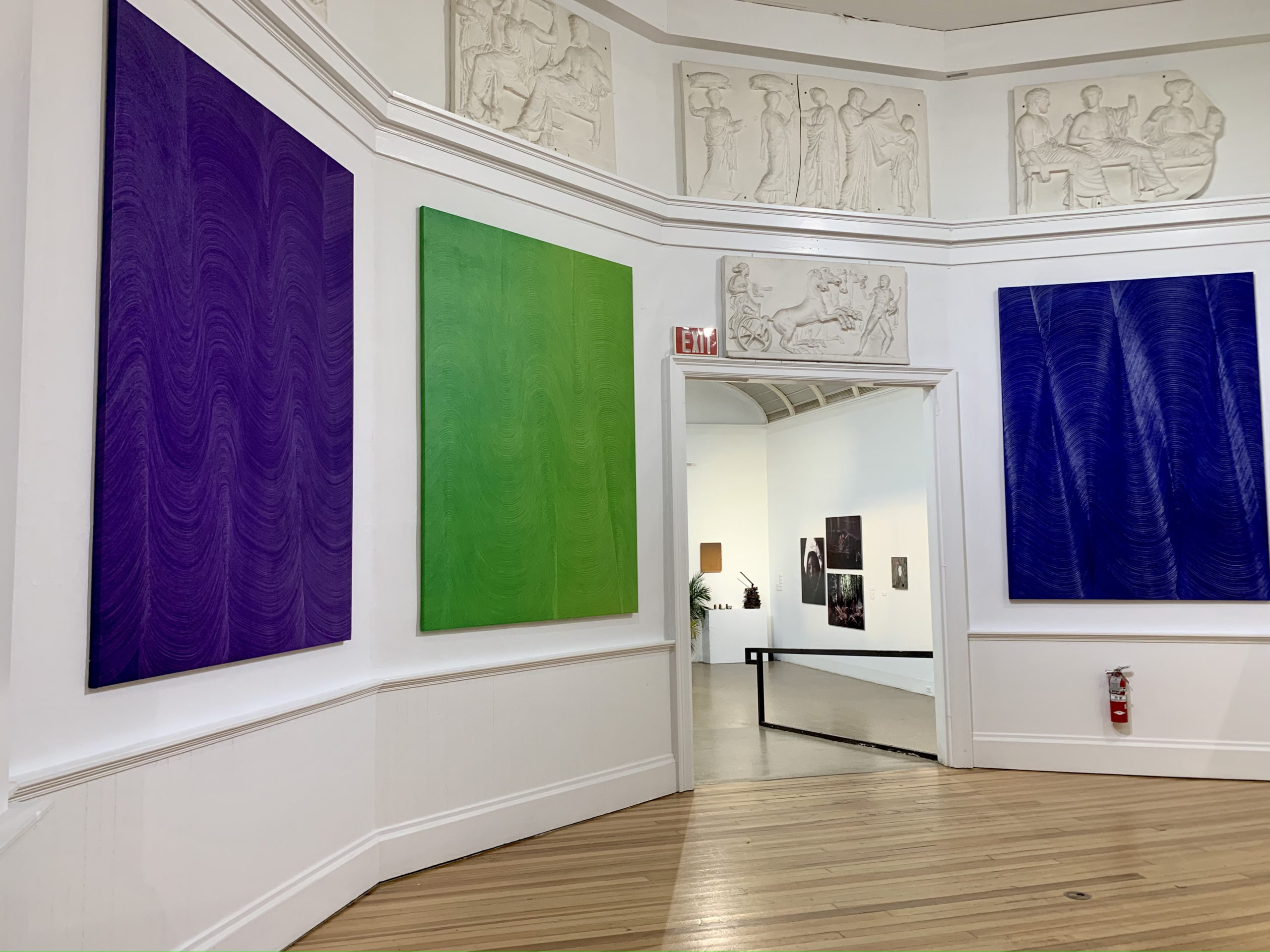 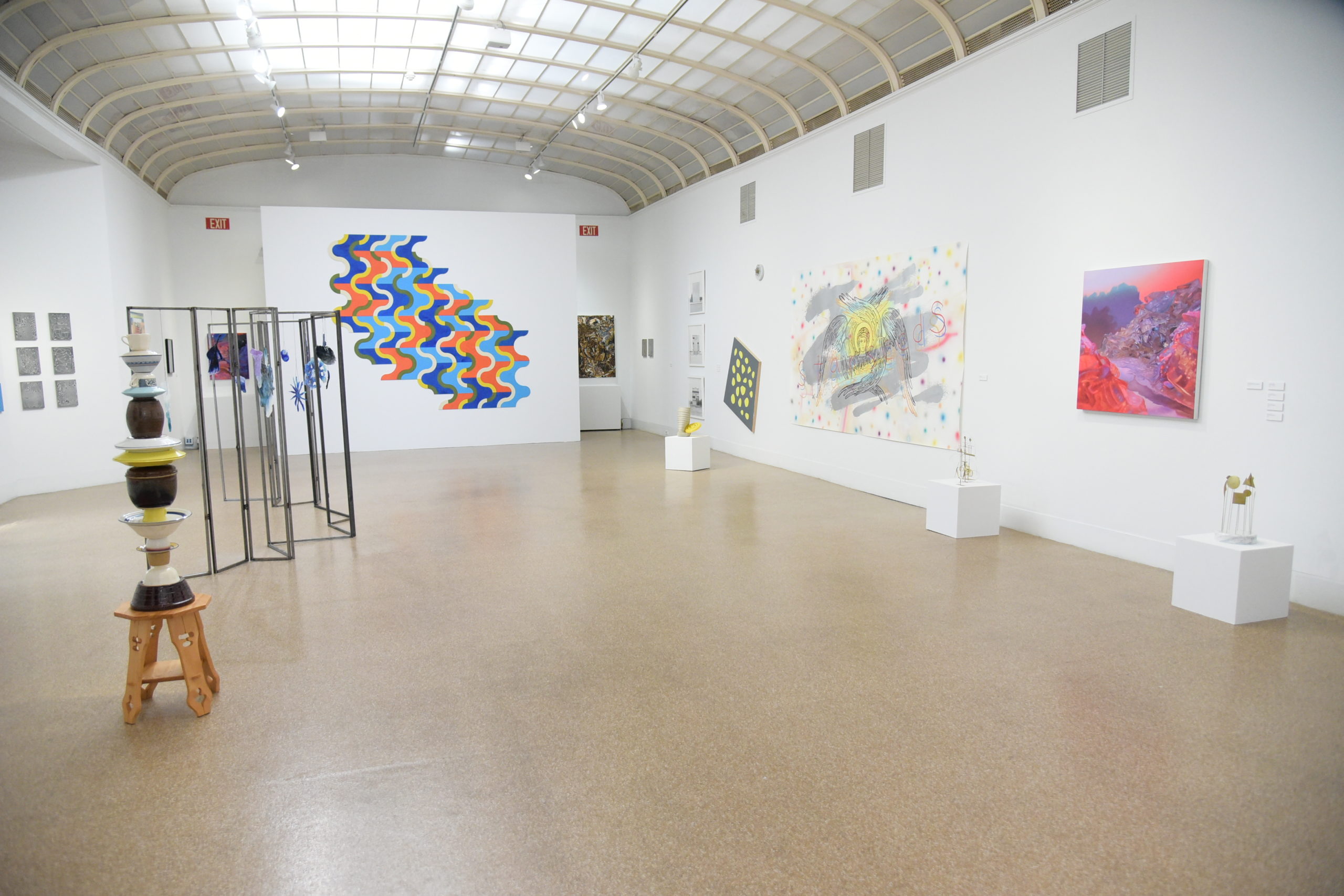 An installation view of "Clearing The Air" at SAC. ROB RICH 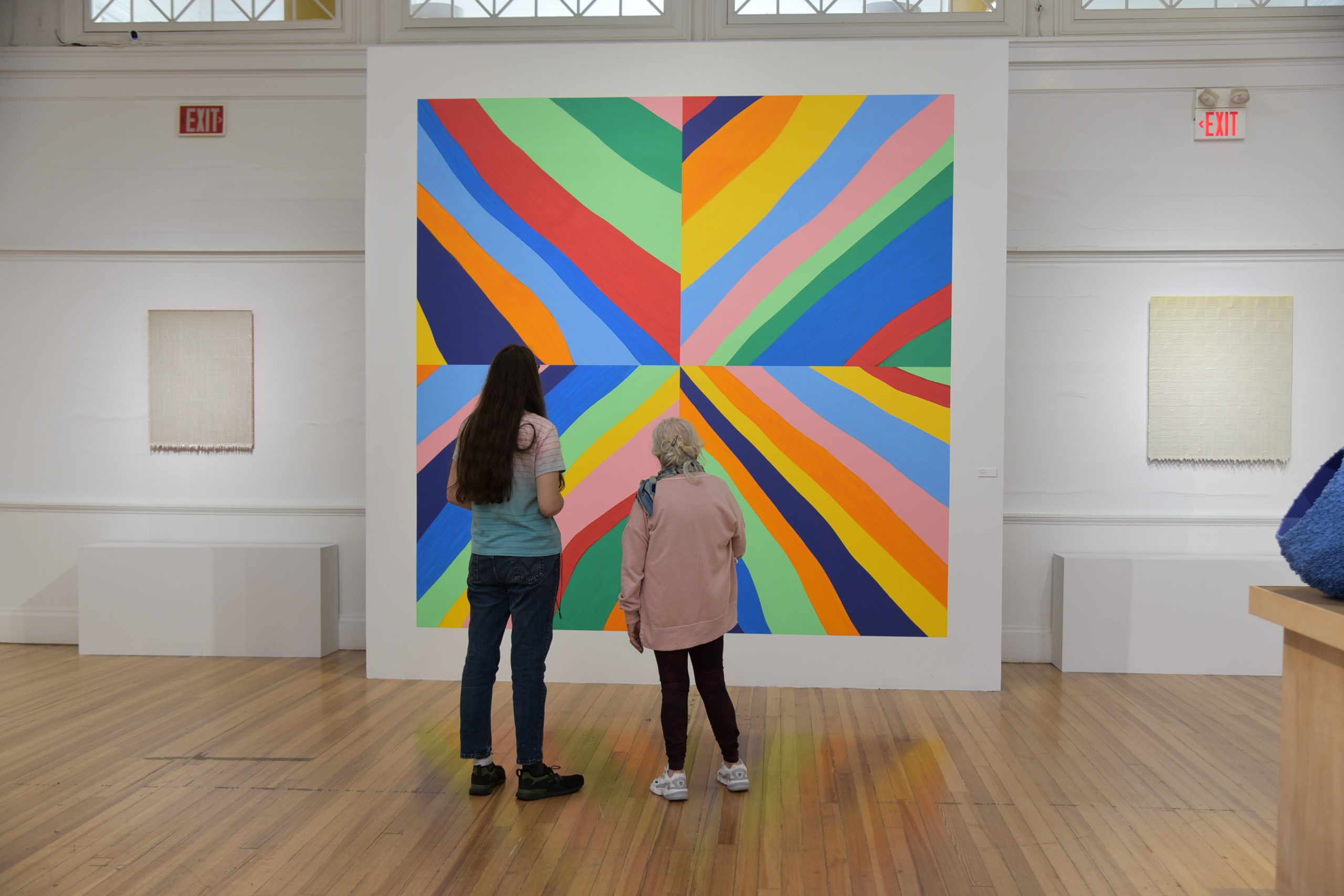 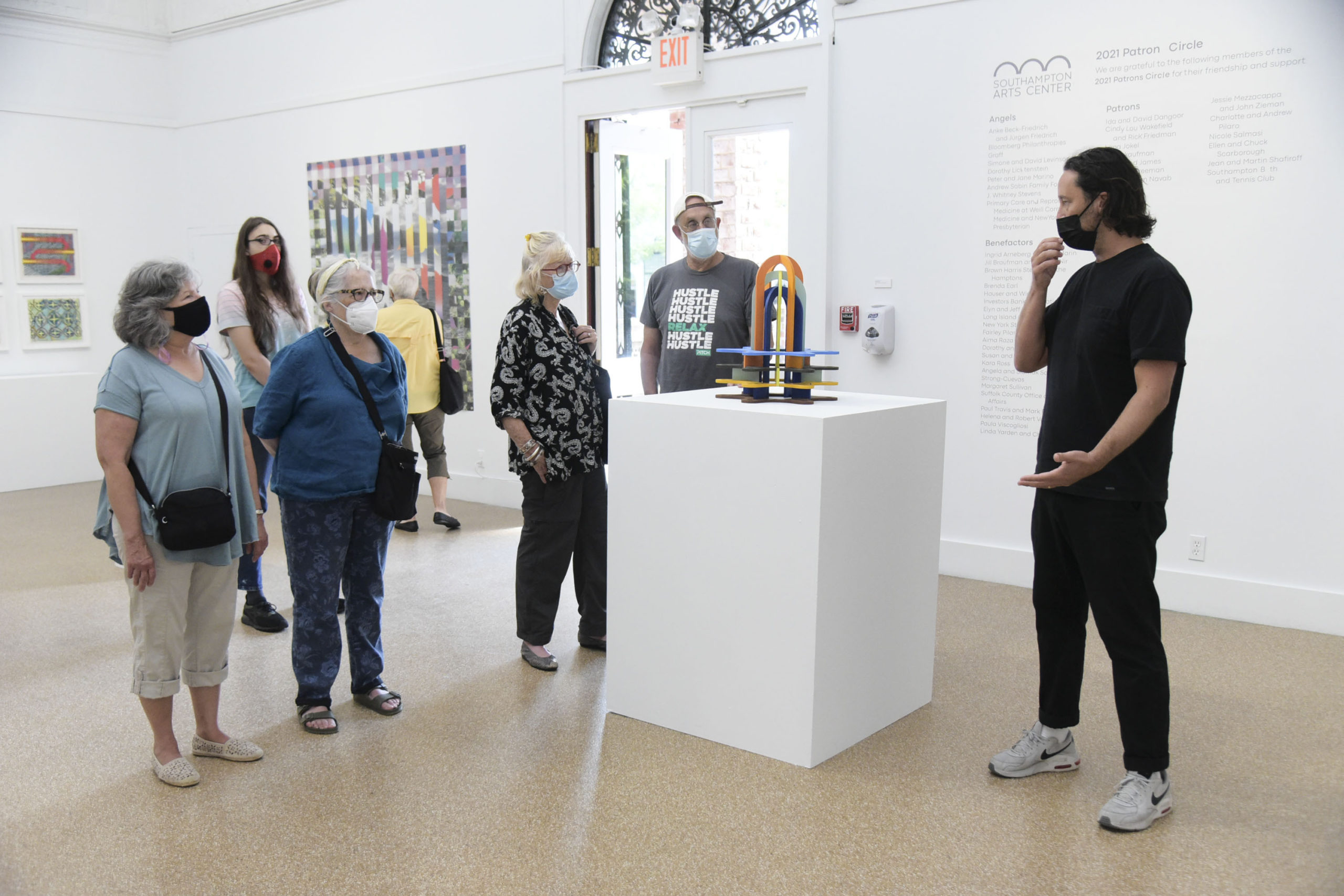 Given all that has transpired in the past year in terms of the toll COVID-19 has taken on the world, it’s probably not a coincidence that many people are looking to reconnect and rejuvenate with activities that heal mind, body and soul.

That includes cultural activities, and now through the beginning of the year, the Southampton Arts Center is hosting “Clearing The Air: The Transformative Power of the Arts,” an exhibition that looks to bring strength and inspiration to a community that’s grown weary in the wake of pandemic, political strife and social injustice.

The show opened September 17 and it’s curated by artist Jay Davis, who is also the curator of Memorial Sloan Kettering (MSK) Cancer Center’s Ambulatory Care Arts Program. With work by more than 40 artists, many of them East End residents, “Clearing the Air” looks to provide a meaningful and healing artistic experience for those facing health or personal challenges. The work on view includes site-specific installations, audio and video work, sculpture, painting and photography, and the emotion it evokes covers the gamut — from ephemeral and humorous to introspective and scientific. A quarter of the artists participating in the show are or have been patients at MSK or other hospitals, with almost all having some experience exhibiting in previous MSK installations organized by Davis.

In a recent phone interview, Tom Dunn, executive director at SAC, explained that “Clearing The Air” is a show that came about in response to discussions he and his staff had about creating an exhibition that spoke to the difficulties encountered during the past year and a half, not just because of the pandemic, but other issues as well.

“We did an exhibit in 2020 called ‘2020 Vision,’ a real-time documentation of what we were all experiencing,” said Dunn. “In late 2020, my SAC colleagues and I were doing long-term thinking and planning, we zeroed in on a show of healing and the transformative power of the arts. That’s what became ‘Clearing The Air.’ It was an idea gestating and we had a few artists in mind.’

Then, coincidentally, as they were discussing the exhibition, Dunn, himself, was diagnosed with a rare form of lymphoma last fall and subsequently underwent treatment at MSK.

“My cancer is in remission and I’m doing great,” said Dunn. “During treatment at MSK, I encountered Jay Davis, the in house curator at MSK hospital and its infusion centers for the last five years. He’s an accomplished artist in his own right and has been practicing many years. I introduced myself to him in January of this year and we had an interesting discussion of what this exhibition could be. I invited him to come in and curate it.”

Dunn notes that as an MSK patient, he absolutely took notice of the art Davis had brought in for the Commack facility where he was being treated.

“He has a contemporary installation there that is site specific and quite beautiful,” said Dunn. “What’s interesting about Jay’s work is he challenges the notion of hospital art. You typically see watercolor pastels, not that there’s anything wrong with them, but he does make a concerted effort to bring in contemporary art.

“This show is interesting because of the challenges of many of the artists, but it’s also uplifting and inspiring for the observer,” said Dunn. “Outside my personal experience and those of the artists in the show, the last year has been incredibly challenging for everybody. The pandemic challenged us in ways we didn’t know possible — civil rights rallies, racial and social justice — in that larger context, we wanted to put a thoughtful show together about this moment.”

When one thinks of art found in a medical setting, often what comes to mind are glossy placid photos of sunsets on tropical beaches, or pastoral landscapes of rural farm fields. Calming images, to be sure, but also somewhat depressing images, especially when encountered year after year by patients who may be facing life-threatening illnesses.

The philosophy behind “Clearing The Air” and the types of curated shows that Davis presents at MSK’s cancer treatment centers is an intriguing one and it goes far beyond those nondescript waiting room views.

“When I started this position at MSK a little over five years ago, I was asked to come in and do a trial exhibit,” Davis recalled in a recent interview. “One of the first things I said was I want to add some joy and humor and all these other aspects of life that complicate your experience. What you want to see in a waiting room is not a vapid landscape or still-life. That’s kind of what you’ve come to expect. You see things that are aging on the walls, it just seems like in a space like that you don’t want to watch decay in front of your eyes.

“It’s really important — whether it’s a group exhibit or a solo installation — that what we do now is communicate with the space, the architecture, the seasons and all these being something considered, not as an after-thought, but with a purposeful intention.”

Davis began his work by curating three galleries for MSK ambulatory care centers, and is now doing 10 of the facilities. The exhibits that he installs at the facilities are temporary, on view for three to six months, or from nine months to a year, depending on the complexity of the installation.

“Those rotate out. As patients are undergoing treatment, they see different iterations happening,” Davis explained.

That means patients are seeing the work evolve over time as they visit the facility over weeks or months. It’s an art-viewing experience quite unlike a typical gallery or museum, where most visitors come just one time to view any given show. Not only does the work itself change, but, notes Davis, so too does the patient’s relationship to it depending on what’s going on in their lives.

“Everybody has baggage they bring in, on a good day or a bad day. Being in there multiple times, it’s good to have work that fills different needs,” Davis explained. “The work itself can change and be malleable as its relationship to your day changes. For me, that what’s really lacking when you go in and see an empty field of wheat or you’re staring longingly at a cloud on a horizon. That’s depressing.”

Curated artistic experiences are becoming more common place at medical centers and Davis explains that when selecting artwork it’s important to be sensitive to the needs of the patients first and foremost.

“There are these unwritten rules in a healthcare setting — you don’t want the color red or things that elude to treatment or the internal body,” said Davis. “I think there are a lot of myths, so many times I have to put the brakes on things and say, ‘Let’s rethink this because this might trigger somebody.’ There are a lot of sensitivities that take place.

“At SAC, I had some liberty to explore notions of time. There’s a clock by Andrew Guenther and a candle by Jef Sharf,” he added. “In a treatment center, it might make you think of time running out. I was thinking of the absence of time, waiting, limbo, as weeks all blur together. It’s something I might not do at the medical center.”

One of the artists taking part in the SAC show is Amagansett’s Will Ryan, who, in 2015, was diagnosed with amyloidosis, a rare blood disease, and recovered after receiving a stem cell transplant. Though there’s no way of knowing for sure, Ryan suspects he may have gotten ill from working with chemicals in his art — specifically encaustics, which can be a toxic medium.

“I spent a month at MSK. It was so hard for me to walk at first. I didn’t know Jay, but it was inspirational to look at the artwork,” said Ryan. “It wasn’t like art you’d see at a Motel 6.”

In September 2016, Ryan celebrated his recovery by organizing “East End Duets,” a show in which he created work in collaboration with other artists. That exhibit was held at The White Room Gallery in Bridgehampton with part of the proceeds benefiting MSK. This year, Ryan was hoping to organize a five-year anniversary of the Duets show, this time at SAC, but he soon realized that COVID-19 would make it impossible for him to collaborate with the artists as he had five years ago.

Instead, SAC was able to create “Clearing The Air” with Davis, and among the work on view in the show is a series of large, colorful, textured paintings by Ryan that figure prominently in one part of the gallery. Titled “In The Flow,” the works, explains Ryan, were inspired by the ocean in Maui, where he spends winters, but ended up riding out most of the pandemic.

“I’m very big into meditation. During COVID, I was meditating a lot and I was in the water a lot snorkeling and I think it was through that I came up with the idea that I wanted images that were meditative,” Ryan explained. “When you’re with them, they put you in a meditative space. They reference the flowing of water and the reflection of things on the bottom of the ocean. I think that’s what influenced me to create those pieces. I wanted meditative, flowing pieces.”

Because he was both an artist and a patient, Ryan is in the unique position to offer insight into how seeing artwork on display at MSK during his treatment helped with his recovery.

“As an artist, it was inspiring, though I think maybe in a different way,” he said. “I think for some people it will make them feel good and hopeful and that’s what I felt too — but also, I wanted to get back to work.”

Southampton Arts Center is at 25 Jobs Lane in Southampton. The galleries are open Thursday through Sunday from noon to 5 p.m. For more information, visit southamptonartscenter.org.