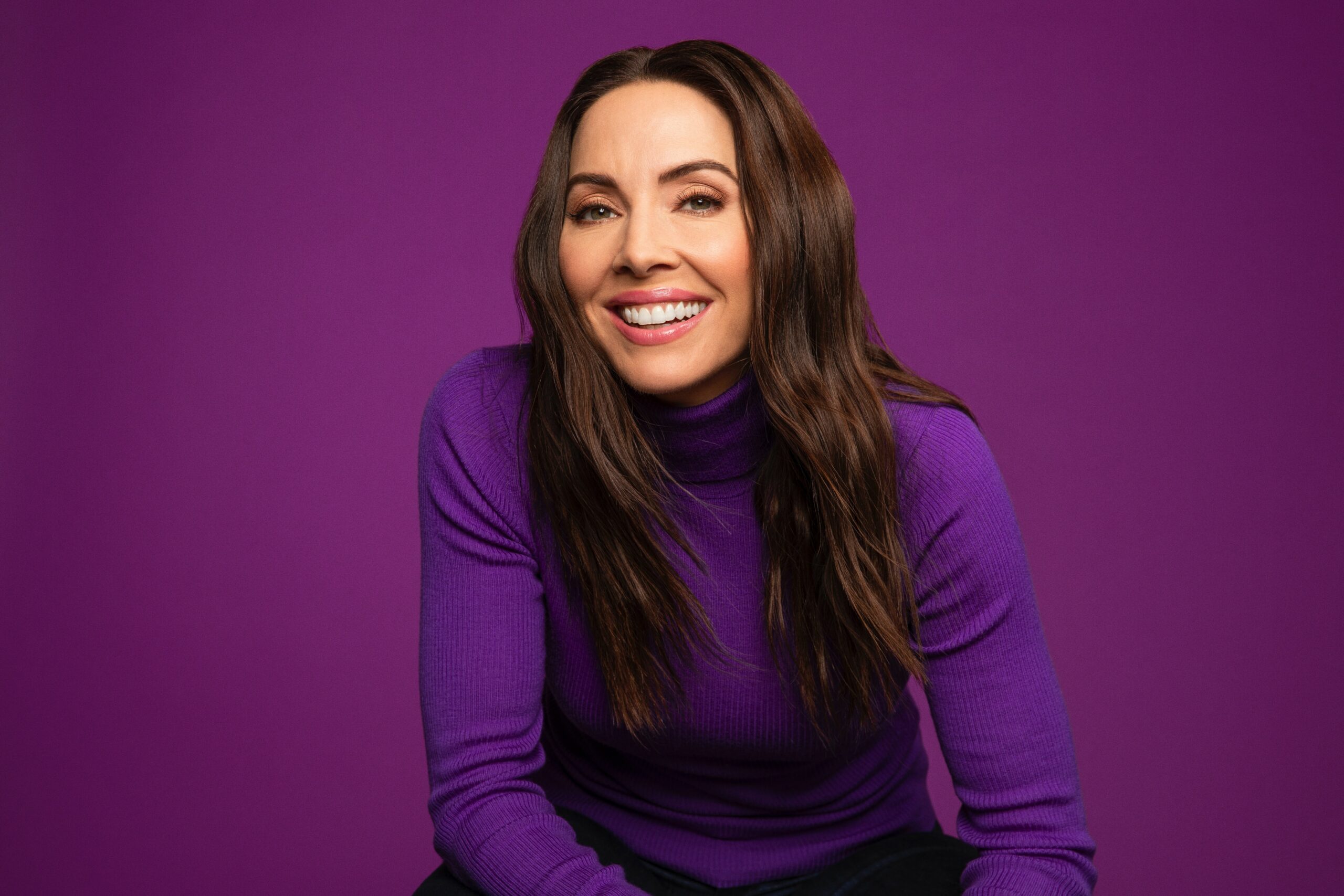 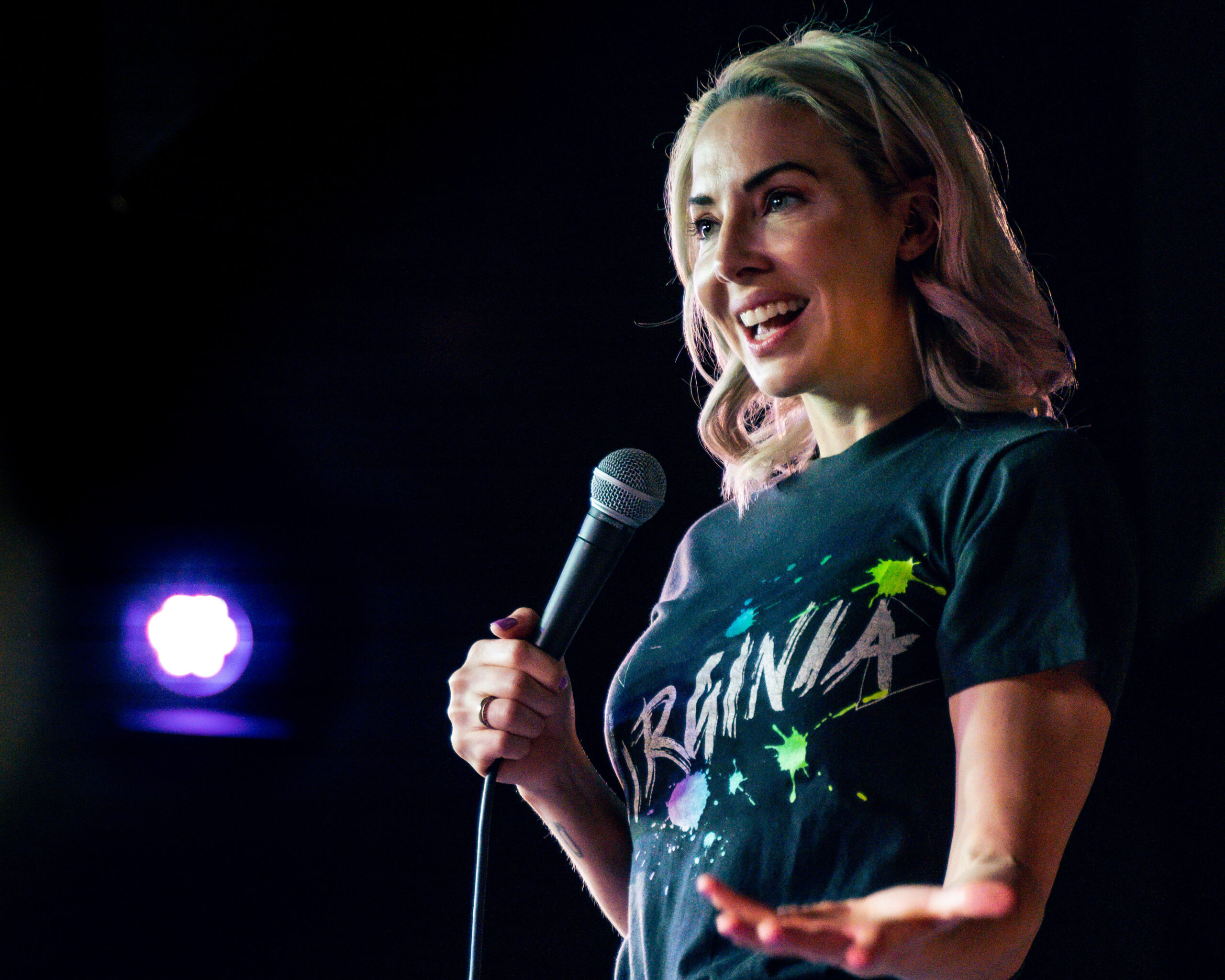 For Whitney Cummings, going back out on the road as a touring comedian in September 2021 was an experiment of sorts, one in which she was hoping to find the answer to a question that had been knocking around in her brain for some time — are people really as awful as they seem online?

The discovery she has made thus far, after visiting more than 50 cities across North America is, to her relief, a resounding “no.” It’s a trend she hopes will continue when she makes her first ever visit to the Westhampton Beach Performing Arts Center for a show on Friday, July 1. It’s one of the final stops on her “Touch Me” Tour, which is a play off her most recent Netflix special, “Can I Touch It?” The tour celebrates the importance of being together again after the isolation wrought by the pandemic over the last two-plus years, and includes reflections on the changes brought about by the pandemic, and observations of today’s society.

The Los Angeles-based comedian, 39, is a multi-hyphenate whose work many people are likely familiar with in one form or another. In addition to her successful stand-up career, which includes multiple comedy specials and appearances on Netflix, HBO and Comedy Central, Cummings is also an actor, producer, writer, director and podcaster. She created and starred in the NBC series, “Whitney,” which aired from 2011 to 2013, and is the co-creator and co-writer (with Michael Patrick King) of the hit CBS sitcom, “Two Broke Girls,” which aired from 2011 to 2017. She wrote a memoir, “I’m Fine, And Other Lies,” in 2017, launched the podcast “Good For You” in 2019 and, in the same year, debuted her comedy special, “Can I Touch It?” on Netflix. Cummings co-wrote and directed “The Female Brain,” an IFC feature film, while also starring alongside Sofia Vergara, James Marsden and Cecily Strong. Her feature film credits include “The Wedding Ringer,” “Made of Honor,” and “The Ridiculous Six,” and she has appeared in such series as “Undateable,” “Workaholics,” “Maron” and the Comedy Central Roasts, which have solidified her presence in comedy television.

The pandemic put a long but ultimately temporary halt to live performances, and when Cummings initially put together the “Touch Me” tour, she booked a large number of dates, figuring that spikes in the COVID numbers would lead to the cancellation of a good number of them. That did not happen, and Cummings is now close to wrapping up a successful tour. She has only four more stops after the Westhampton Beach show.

Despite a longer traveling grind than she may have initially anticipated, Cummings said she’s been thrilled to be back out on tour again, interacting with audiences and making the kind of human connections so many people were deprived of during the earlier stages of the pandemic.

“I’m tired, but I’m so energized by the fact that people showed up and people really want to laugh, and they’re not all monsters,” she said. “I needed proof that people are thoughtful and sensitive and mindful and gracious. It’s the miracle of getting 3,000 or 4,000 people in one room and they all agree, at least for that hour or two, even though we all could’ve voted differently. We just needed to get in a room and have some drinks and have a laugh. Everyone is like, ‘we’re in the apocalypse!’ but I’m like, you just need to go to a comedy show.”

That kind of laughter-is-the-best-medicine healing has been a two-way street for Cummings, who admitted that, before the tour, she was “getting a bit discouraged” about her “purpose on the planet.” As an outspoken woman working in comedy — a sector of the entertainment industry that has not traditionally been as kind or welcoming to women as it has to men — Cummings has witnessed her fair share of ugly human behavior, and has been the subject of online vitriol. She has referred to herself as “an inherently triggering person” in interviews, and has had to make peace with misogynistic attacks, and the kind of backlash that many male comedians have only started to face recently, with increased scrutiny of racism and homophobia in their acts.

“I think there was a lot that needed to be proven around the time the tour opened,” she said. “Like, are people really as shitty as we think they are? Do people really hate each other this much? We’re in this bubble of internet comments and not being with actual human beings. But the truth is that most people don’t make negative comments; most people don’t comment at all, and people who do, they do it all day, so we have this skewed sense of how toxic the world is.”

Cummings has promised her audiences on the “Touch Me” tour that they can expect a show free of political agenda or debate, or any deep dives into the kind of topics that have inflamed debate in recent months and years.

“What I say about this show is that whether you think women are funny or not, you should come if for no other reason than I won’t be speaking about politics,” she said. She pushes back against the idea that that kind of approach is irresponsible, that she should always be using her platform to promote and advance a certain set of ideals or causes. “People have to have somewhere to go where they can just breathe for a second,” she added.

Cummings has hewed to that idea of healing while on her tour, but she’s also appreciative of the seismic shifts that have happened in the comedy world in recent years, saying that now is a thrilling time to be a comedian, precisely because of the increased scrutiny on comedians and the kind of jokes they’re making.

“Now is the most exciting time ever to see comedy,” she said. “Because everyone has to level up. The good that’s come with the self-righteous indignation on Twitter is that it’s made comedians have to think twice.”

Being on tour for months has not only shown Cummings that people are not nearly as horrible as they seem online, but that audiences are often smarter than they’re given credit for.

“People are like, ‘oh everyone is so sensitive now,’ but it’s like, no, they’re just not going to laugh at shit that’s racist.”

“We don’t look back at clothes we wore 10 years ago and get mad that we can’t wear them anymore,” she added. “Comedy is like fashion; you move on. It’s an exciting time to see comedy because we have to play to the top of our intelligence. You can’t rely on punching down anymore. Everyone wants us to mature.”

Making people laugh might not seem like serious business, but for Cummings, the role that comedians play in society is more important than ever. As a successful producer, writer and director in Hollywood, doing stand-up isn’t Cummings’s only bread and butter, but her passion for it comes through clearly when she speaks about the role comedians play in society and in the larger culture.

“Comedians are like manic anthropologists,” she said. “We’re constantly like, ‘is this anything? Is this something?’ We run around and present our findings with barely any evidence. We’re like lawyers who say something that might not be true and then try to prove it.

“We’re good at what we do because we’re sensitive and obsess over what is and isn’t fair,” she added.

Going back on tour has been a way for Cummings and other comedians whose acts were sidelined by the pandemic to play with those ideas again, with the element of face-to-face human interaction necessary for continued evolution and engagement.

Cummings added that she’s been particularly excited that being out and about again has enabled her to help support the next generation of comedians, whom she calls “amazing.”

“The new ones are not ignorant,” she said. “They’re cool and diverse and thoughtful and smart. Going on the road gives you the opportunity to employ [newer comedians] and give them the chance to open for you. It’s really important that comedians have the resources they need to keep touring safely so the next generation can keep working and developing. The next generation keeps making us better, because we get jealous and competitive.”

Comedians of diverse backgrounds and in various stages of their careers, pushing the envelope in different ways, is healthy for the industry overall. At the end of the day, the goal is often the same.

“Comedy is the only thing that unites us,” Cummings said. “On a daily basis, you go, ‘am I Coke or Pepsi? Cowboys or Dolphins?’ Everything is about how we pit ourselves against each other, but comedy is like, what do we all agree is annoying? When you spend time having your brain think about what we all have in common, that’s when we can function. Comedians are at our best when we can put things in perspective.”