Cyril Christo turns his attention to the Arctic and global warming 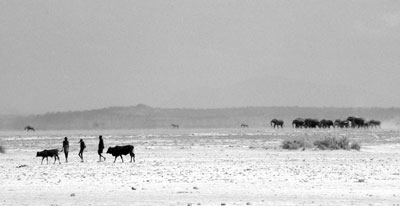 One of the images that will be included in the next book from Cyril Christo and Marie Wilkinson, “Walking Thunder: In the

For a decade they have been assembling a visual arsenal—an inventory of extraordinary photographs they have taken in East Africa and the Arctic—images that honor ancient connections between man and nature and serve as haunting reminders of what may soon be lost should the complacency of our techno-centric, wants-over-needs culture prevail.

“We have made the documenting and sounding the alarm for what remains of this world our main mission,” asserts Mr. Christo, a poet who uses eloquence as his other weapon, writing with lyrical urgency of besieged ice floes and elephants, polar bears and pastoral groups. He pleads for their preservation, for an end to plundering for oil, ivory and the earth’s dwindling resources, and calls for immediate action to save what can never be brought back once it is gone.

In 2005 the couple published “Lost Africa: the Eyes of Origin,” a collection of their images from Africa focusing on the continent’s pastoral groups with an essay by Mr. Christo that he described in a 2005 interview as “a prayer for their continuity.”

A few weeks after that interview, Ms. Wilkinson gave birth to their son, Lysander, and in the three years since then they have returned twice to Africa and made two trips to the Arctic, taking photographs, steeping themselves in eons-old cultures and landscapes now at risk of extinction, and introducing little Lysander to elephants, polar bears and “the absolute wonder of existence.”

This summer they have returned to Amagansett with Lysander, whose education in wonder has been further enriched by the spectacle of thousands of cormorants in flight and other marvels of the natural world around Accabonac. On this day, his parents, who are preparing to add two more books that will make the case for their voiceless subjects with stunning images and lyrical language, have come again to Babette’s in East Hampton for a second interview.

Mr. Christo has a cheerful manner and a winsome smile that serve to soften the edges of his intensity, but he is a man who clearly feels that time is not on our side. He speaks at high speed. Metaphors fly and allusions to Immanuel Kant, the romantic poets, and Delacroix’s journal bump up against references to the Ndorobo of Kenya, Native American stargazers and Babar, the elephant. Nothing is gratuitous, everything adds to the argument, though occasionally the equally passionate but less prolix Ms. Wilkinson reminds her husband that the point might be made in plainer, less romantic terms.

No offense meant, no offense taken and the brakes are briefly applied and released.

“Our next book is called ‘Walking Thunder: In the Footsteps of Giants,’” Mr. Christo informs. A preview, which appears in the May-June issue of the environmental magazine, Orion, opens with these words: “Among the hunter-gatherers of Kenya, whose last remaining forests are in jeopardy due to deforestation, the Ndorobo, or Ogiek, share tales about their people having followed the migration paths of elephants for centuries.”

Once there were five million elephants, he reports, their numbers reduced now to fewer than half a million. The hunter-gatherers of Africa continue to honor the elephant but that bond with the natural world has broken in developed parts of the world, a rupture that Mr. Christo believes imperils not only the elephants and those who have maintained their connection with them but all of humanity.

“Our futures are deeply intertwined,” he asserts, and the book is intended to demonstrate that truth at the deepest level. “We want to make it a transcendent archive,” he says. His hope for the images is that they will provide “a passage out of time,” a way to hear the voice of the elephant and understand the importance of its biological, cultural and mythological role in the lives of all humans.

In Lysander, who shares their travels and has a child’s openness to his connection with animals, they see evidence of the possibilities for a future in which children need not necessarily be “mesmerized by screens, gadgets, and things that you stick in your ears.”

“This is truly a family affair,” says Mr. Christo.

“He is a very happy, engaged child,” says Lysander’s mother. “We assume he is not gong to remember specifics but he is a very good little traveler and we are looking at things a little bit as though through his eyes.”

In an essay titled “The Palace of the Arctic,” Mr. Christo has written of the family’s trip north, in preparation for their third book and motivated in part by Lysander, who “showed interest in seeing a polar bear.” It was also, of course, an opportunity to absorb the wisdom of the Inuit, “who see something in the larger nature, something we have lost touch with.”

When they arrive, Lysander is predictably enamored of the great white bear, as he was of the elephant and, just as predictably, Mr. Christo is inspired to poetic description by the landscape and its wildlife. “Few places stir the sense of the sublime as the Arctic,” he writes. “Every kilometer traversed fills the spectator with the pageant of fjords and ice floes crashing against each other bearing the weight of seals, walrus and polar bears or the near sylvan solitude of mountains meeting the lonely depths of a seemingly pristine sea.”

As anyone attuned to the news is well aware, global warming is already threatening this extraordinary environment with destruction. In his essay, Mr. Christo writes that while once it was the Titanic that was sunk by an iceberg in the northern waters of the Atlantic, “today it is the disappearance of that ice that may sink an entire civilization.”

Comparing the span of human evolution to a stretch of rope 100 feet long, he points out that the final quarter inch represents the industrial revolution. “The dust on the end stands for the cybernetic revolution and the time we have known that humans of all species have altered the climate and the biosphere.”

The party aboard ship saw 11 polar bears during the trip and “the great marauder and predator of the north” is now part of Lysander’s memory, imagination and dreams. Yet, unless current trends can be turned around and complacency yields to urgent action, the polar bear’s future, says Mr. Christo, is bleak. Some 20,000 or so extant bears may survive the loss of the ice over the next generation, he says, but most may well disappear into oblivion.

“Walking Thunder: In the Footsteps of Giants” is scheduled for publication in 2009 and the as yet untitled Arctic book will follow. Meanwhile the couple’s photographs are available for purchase and can be seen by appointment (267-3705).