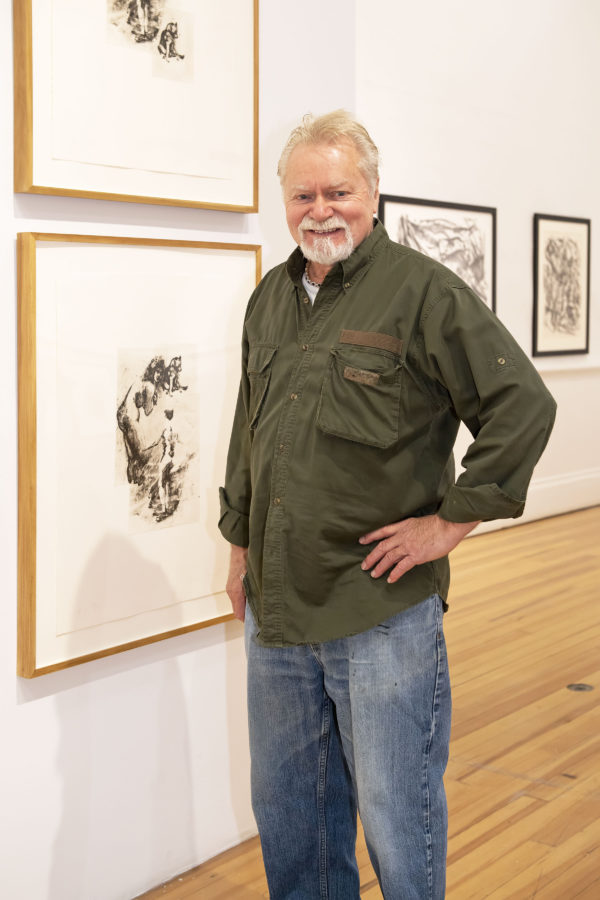 Dan Welden at the Southampton Arts Center with work from the current printmaking exhibition. 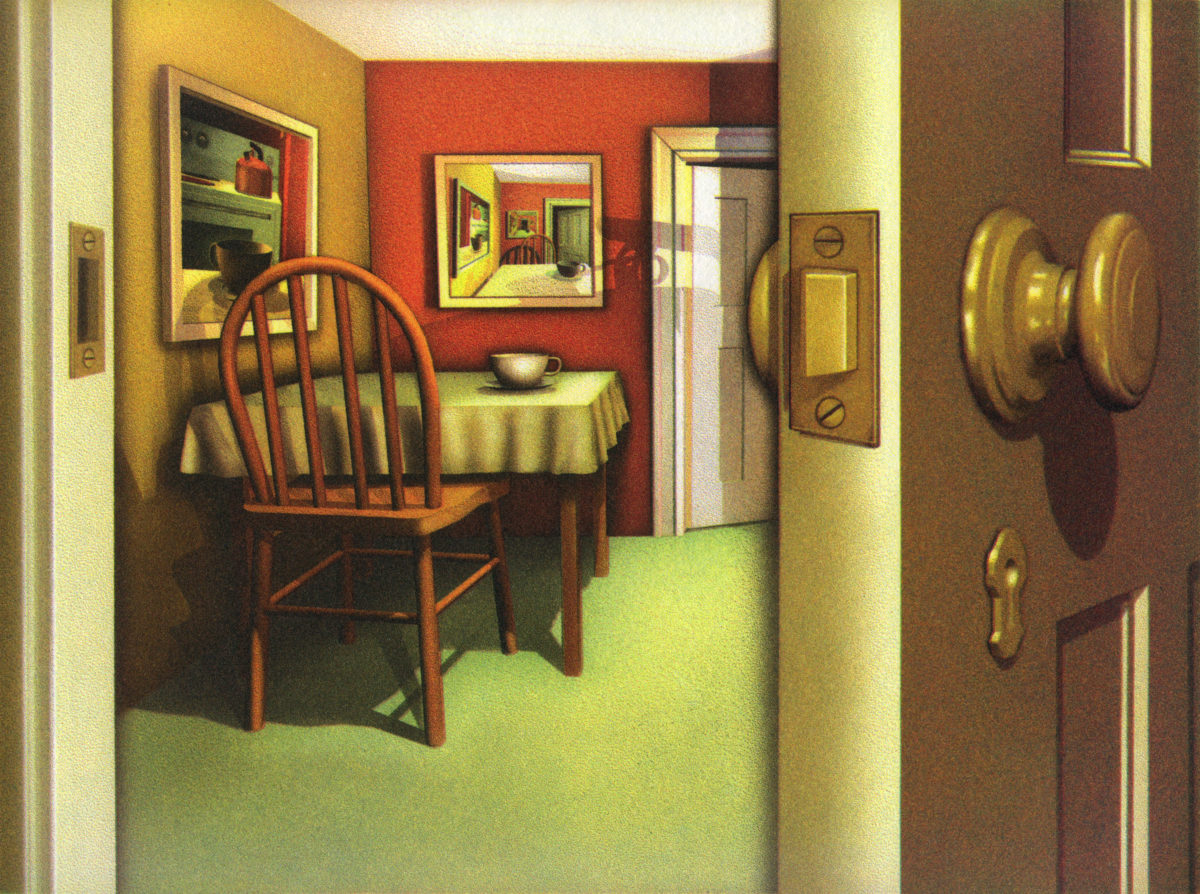 Janet Ballweg "Another Side of Truth," 2019. Solarplate. 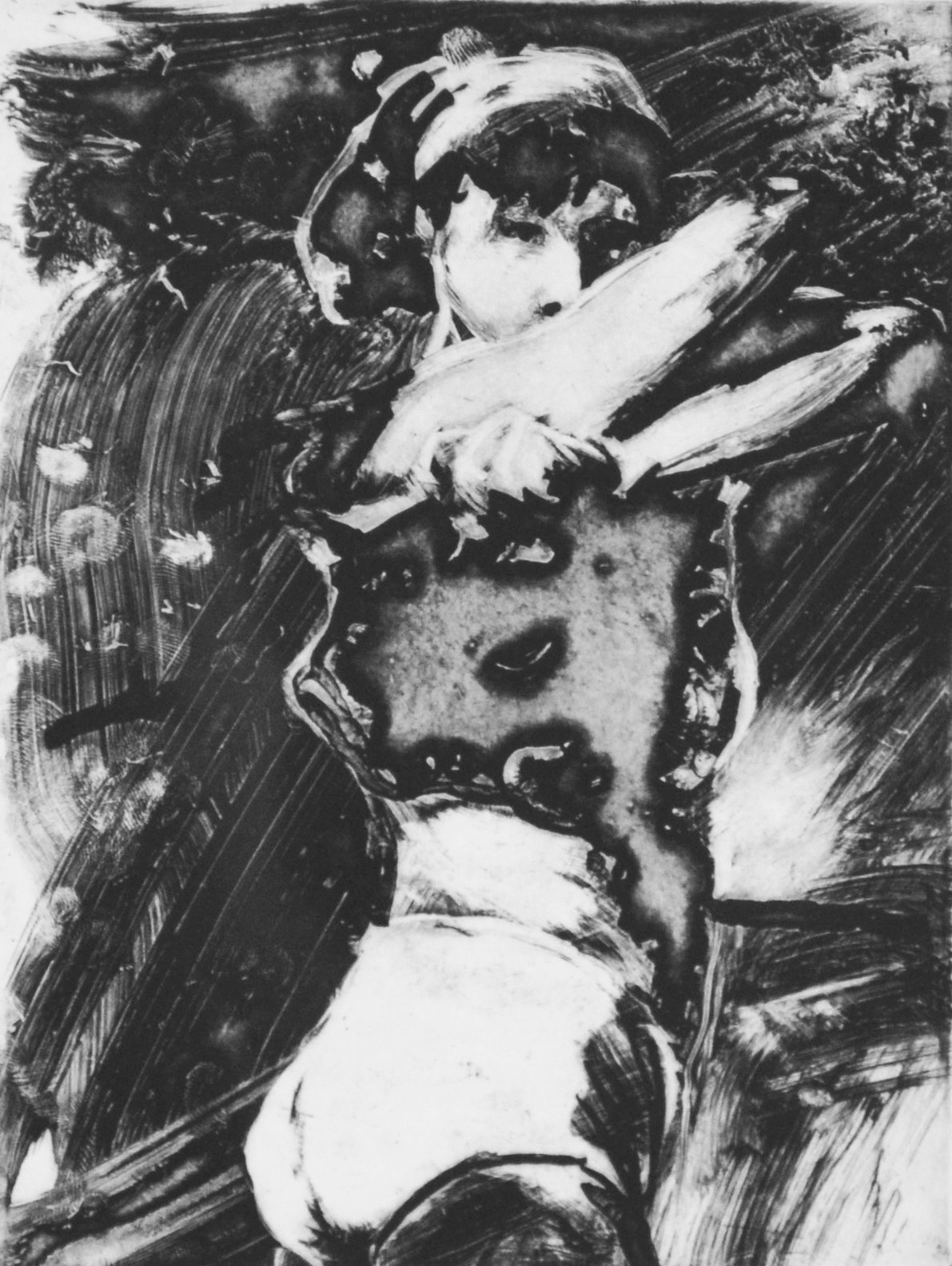 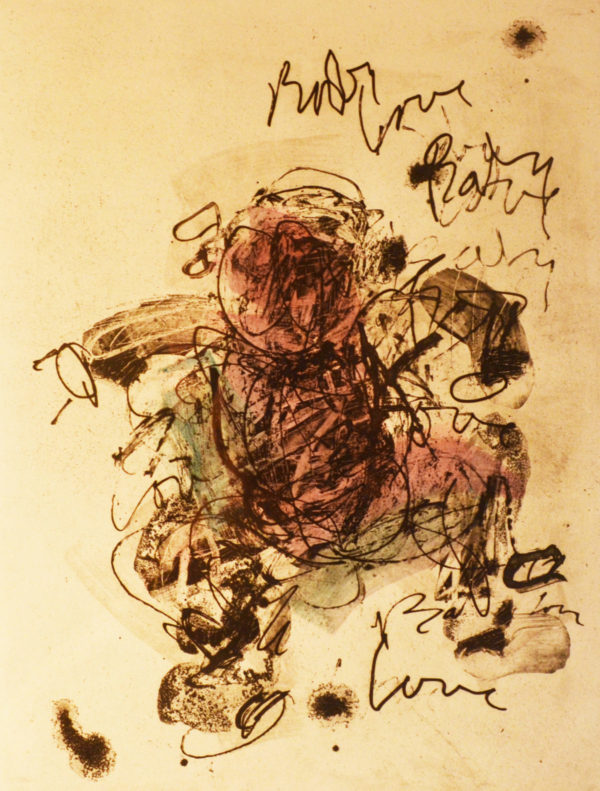 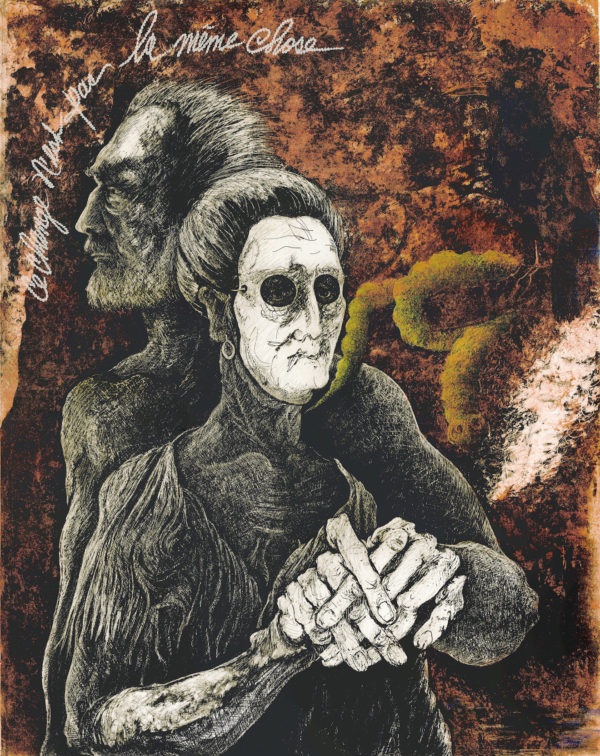 World-renowned minimalist Dan Flavin was by far the most difficult artist to ever work with says Sag Harbor-based printmaker Dan Welden, while abstract expressionist Willem de Kooning was the easiest.

David Salle would be the most surprising — and generous — and Jane Freilicher one of the more dramatic. When the Bavarian limestone broke in Welden’s press, she threw her hands in the air and quit on the spot, casting her ruined print aside as a bad omen.

She would later find herself in Welden’s studio once more, but there was one particularly influential artist who never quit on the printmaker, failure after failure.

And that was Eric Fischl.

“I was just using it for myself, for the most part, but when Eric came along, it was something else. I had to make it perfect,” Welden said. “In trying to do that, I learned a very important thing. It was almost like a light bulb went off in my head. I had no teacher. I had nobody to tell me how to do this and how to use it and how to make it work. I had to just figure it all out.

The “Solar Impressions” jury, which included Fischl, selected 113 works to make the final cut. Those works are on view through December 29 at SAC alongside “International Masters/Collaborations in Printmaking,” an exhibition featuring Welden’s partnerships with major figures in modern and contemporary art — among them Flavin, de Kooning, Salle, Freilicher, Fischl and more.

“It’s been one of the most wonderful joys of my life, to be able to work with other artists and give them the satisfactory note of their images,” Welden said. “Most of the artists that I worked with would glow with enthusiasm and excitement.”

From Kiki Smith and James Brooks to Syd Solomon and Robert Dash, the process always began with a conversation between printmaker and artist, Welden said. They would discuss art and life and the East End — as many lived locally — and what to expect from the printmaking process, either by lithographic stone or etched Solarplate, the process Welden invented in the 1970s while living in Germany.

Using a light sensitized, steel-backed polymer material, the eco-friendly method is an alternative to hazardous printing techniques, Welden explained. It’s exposed with ultraviolet light — in other words, the sun — and developed with ordinary tap water to create a plate using chemistry and physics.

“When exposed to UV light, or the sun, it becomes hard. Any parts that are not exposed remain water-soluble,” Welden explained. “So if you took this plate and put a leaf on it, and you put it in the sun, the leaf would block out the ultra-violet light. All the other parts around the leaf would become hardened. So you bring that plate indoors, take some water, a little brush and start scrubbing, and the shape of the leaf will be indented like a crater.”

From there, paint can be applied to the surface, or the indentation, or both, Welden said, which is where the creativity in printmaking reveals itself.

“There is a difference between an original print and one that is a reproductive print: when it’s created with the intention of the print, as opposed to taking this and making a copy of it,” he said. “When I work with an artist, there is nothing that exists ahead of time, and that’s why it’s called an original print. It takes blood, sweat and sometimes tears.”

It can also take a bit of arm-twisting, Welden said, as artists are known to be a stubborn bunch. The earliest print in the show, by Roy Nicholson, was no exception.

He faced a similar struggle with Flavin — not so much in the creative act itself, but in the finishing of it.

“He just didn’t feel like signing the work,” Welden said. “Dan Flavin had incredibly beautiful Catholic school penmanship. With a pencil, he was just magical in terms of how he would make his pencil flow for his signature and everything. To write a title called, ‘View of Gardiners Island from Lion Head Beach, dedicated to Thomas Moran,’ to write that 100 times, I guess he didn’t feel like doing it.”

On the other hand, Willem and Elaine de Kooning were dream collaborators and, more importantly, friends. She didn’t hold any punches, Welden said, while he was a bit more reserved.

“I love both of them. They were both fantastic. I cooked a venison dinner for Bill once, and we watched ‘Star Wars’ together with my son,” Welden said. “He was very easy to work with. He would have a stone out in front of him and just work around it, and look at it and wonder, and look a little bit more and wonder, and then just say, ‘Okay, is that enough?’ And I’d say, ‘Maybe a little bit more.’ And he’d do a little bit more. I’d take it back to the studio, proof it up and bring him back the print and he would sign it.

“I like to say sometimes that Bill de Kooning asked me for advice. It was really kind of cool,” he continued. “The artist actually creates the image on the plate, or they create an image to go on the plate, and basically I’m just there as a machine, or a mechanic, or an advisor, or a technician, or a teacher.”

When considering the list of names in Welden’s personal collection of collaborations, so many of his temporary partners have since died, among them Kurt Vonnegut, Jimmy Ernst, Bill King, Alfonso Ossorio, Robert Gwathmey and Ibram Lassaw.

For the printmaker, the body of work is a time capsule of sorts — not only of their art, but also of their memories together.

“The work doesn’t mean as much as their personalities do,” he said. “It’s the memory of them that are more important than the images they did. To me, they are, because even though I had my problems with Dan Flavin, I still like the idea of working with him. The experience of working with each of these people is irreplaceable. There is nothing that can be compared to being amongst these giants.”

“Solar Impressions” Juried Exhibition and “International Masters/Collaborations in Printmaking” will remain on view through December 29 at the Southampton Arts Center, 25 Jobs Lane, Southampton. In addition, Eric Fischl and Dan Welden collaborated to produce a special Solarplate edition for the exhibition, which is available for purchase to benefit Southampton Arts Center and Inspiration Plus. For more information, call 631-283-0967 or visit southamptonartscenter.org.