Despite Tragic Loss, East End Special Players Decide The Show Must Go On 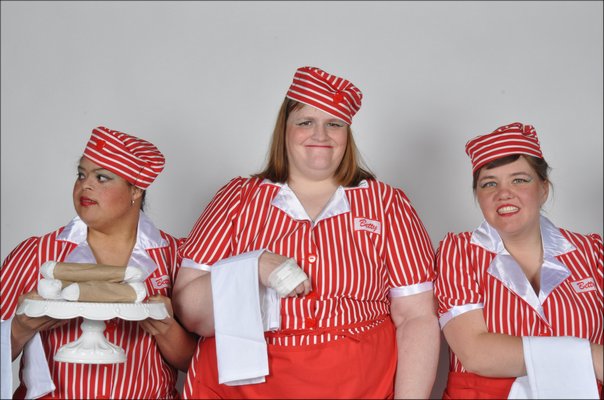 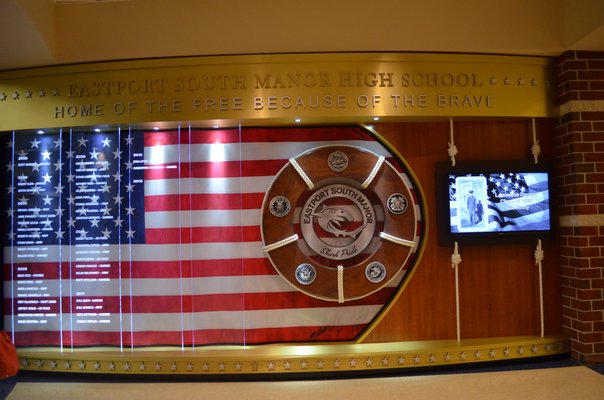 The Wall of Honor at Eastport South Manor Junior-Senior High School was completed in February of 2013. The names of ESM graduates in the armed forces were added for the dedication ceremony last week. Alexa Gorman 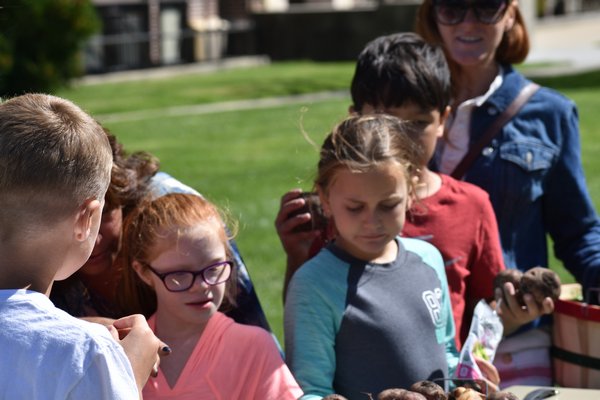 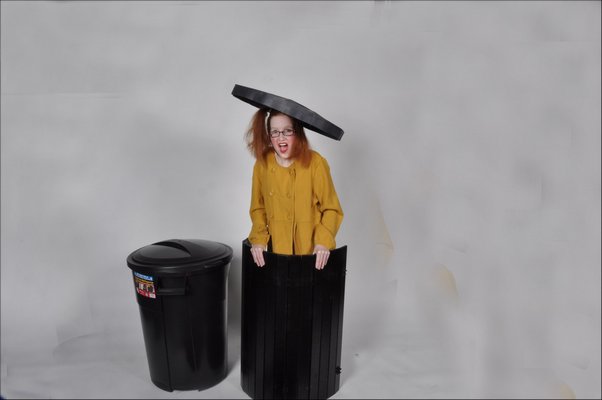 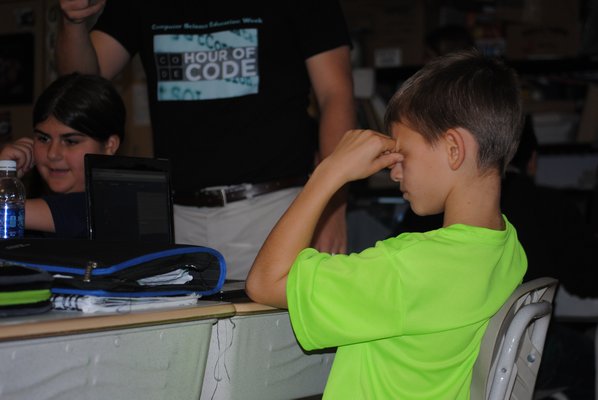 November 19 seemed like any other Saturday: a beautiful fall day, unseasonably warm at the Bridgehampton Community Center in the mid-afternoon. Like any other Saturday, the East End Special Players were meeting to rehearse their upcoming show, “Trouble in Jamaica: A Stinking, Dirty Musical.”The players have been writing their own shows for eight years now, so the cast was seasoned and familiar, used to working with each other. Their artistic director, Jacqui Leader, was keeping the pace and rhythm of the rehearsals calm—or as calm as humanly possible just three weeks away from opening night. She counts 32 players in the troupe, who range in age from about 19 to about 60, and who all have developmental disabilities of varying degrees.

The air soon would be buzzing with laughter and conversation and the usual frenetic energy of thespians in the throes of preparation. Since this is the first show featuring live musical numbers, Loreen Enright would be accompanying at the piano. The Players would be filing in to have a little lunch and then get down to (show) business.

But this wasn’t just another day.

Just two days prior, the East End Special Players lost one of their own—a beloved member of the ensemble, the “class clown turned lead actor” who often took on major roles. Everyone loved Tommy Weinberger.

In this upcoming production, his role as the building superintendent was pivotal. Tommy’s wife, Betsy Weinberger, an actress and member of the group, had informed Ms. Leader that Tommy had died in his sleep. He was 44.

Ms. Leader wasn’t sure what to do.

“We gave the Players a heads-up about what had happened and asked them to come in,” she said. “And they all came. At first, I thought, there’s no way we can do this play. And then I thought, ‘I have to keep it together for them.’”

When they all gathered on that Saturday, Ms. Leader said, it was “rocky.”

“It was very up and down. People were hysterical, screaming,” she said.

When everyone calmed down, they came together in a circle. They started singing songs that Tommy loved. They started celebrating his life.

“I presented two options to them. One was to postpone the show until the spring,” Ms. Leader said. The other was described as a “thunderbolt from the sky,” which was Tommy saying, “Like hell you’re not gonna do the play!”

“Every single one decided to go on with the show,” Ms. Leader said. “They want to do this for Tommy.”

Tommy’s widow agreed. Ms. Weinberger, who plays a waitress/tenant in the upcoming production, said, “I miss him so much. I try to be strong. We want to do this for him.”

She has been with the Players for several years. “I love to act,” she said. “I’ve wanted to act my whole life, and people have told me, ‘You can’t remember lines’—but then I heard about this, and then I joined.” She added, “I love this show, because we did it all ourselves—we don’t even have a narrator.”

Sound engineer Eric Hegi was one of Tommy’s best friends, and he offered to step in and play the super. “They were like two peas in a pod,” Ms. Leader said. “Eric understood Tommy.”

That same Saturday, after the members collected themselves, talked about their feelings and celebrated Tommy some more, they did what they had come here to do: They rehearsed.

The show must go on.

For the East End Special Players, it’s been going on since 1985, when founder Helen Rudman began a Saturday program for the developmentally disabled, with a focus on the theater.

Ms. Leader has been involved for 23 years. “I was acting in local theater, and a friend said this woman is looking for a new director,” she recalled. “I didn’t know anything about the learning disabled, but this friend was very persistent!”

Ms. Leader was encouraged to attend one of the rehearsals. “I realized she was right. I fell in love with all the actors and actresses right then and there,” she said.

At a rehearsal the Saturday after Thanksgiving, the talent onstage made those watching forget about disabilities. The production is just too clever, funny, entertaining and thought provoking. The cast is too talented and earnest. The sheer originality of the production makes one overlook the fact that these are actors and actresses with Down syndrome or schizophrenia, or on the autism spectrum.

“It’s easy to find a play like ‘Grease’ or something, but this is on another level,” Ms. Leader said. “The Players come up with the concept and write their own lines, and it’s just so much better for them to create it and for all of us to see what their imaginations come up with.”

She videotapes everything, and because the Players can get together only once a week, there’s a lot to accomplish at rehearsals.

“I don’t have a formula on how to create a play,” Ms. Leader said. “So I ask: What’s important to them? What do they find silly or funny? What do they want to talk about? We discuss. Then it’s, like, ‘Okay, let’s act this scene out!’ It’s kind of like magic.

“‘Trouble in Jamaica’ came about from the Players wanting to try out all these different types of characters. Then we had to figure out where they live, what they are going to do,” she continued. “We decided we would set up a tenement building in Jamaica, Queens, and the Players would be the tenants who live there.”

Twenty-one-year-old Eliot Smith said he loves participating in the shows, which he has done for two years. Taking a break from a musical number, a parody of “Tonight” from “West Side Story,” he said, “I like to talk a lot, so I like this. Memorizing lines is hard. I made up my own character—the owner of an Italian restaurant named Michael Angelo. It’s fun.”

The Players practice their numbers with a piano accompanist—“which they love,” Ms. Leader said—and a choreographer comes in to teach them simple steps.

“There’s such pride. It’s like they own the play—and they do, because they really have made it all up!” she said.

The East End Special Players troupe is peopled solely through word-of-mouth, and they never turn anyone away—no matter what disability a new member might have. The mission is to enhance the lives of mentally disabled adults through the theater arts.

And the program has grown and grown, from mime performances in the beginning to original, fully realized theatrical productions.

The Players have performed at the governor’s mansion in Albany, Guild Hall in East Hampton, the Westhampton Beach Performing Arts Center, Southampton College, Dowling College and local high schools. This show will open at Bay Street Theater in Sag Harbor and then travel to other venues.

Ms. Leader is the first to admit it can be challenging.

“I have a great support system,” she said, mentioning Dominique DeCock, who does costume design, Gabriele Raacke, who handles transportation, and two young volunteers, Abby Dupree and Samantha Kinney—“They bring a great energy”—in addition to Ms. Enright, who is doing the music. And, of course, there’s Mr. Hegi on sound and now stepping in to play a lead role.

“Everybody brings something special,” Ms. Leader said. “We all love working with people with disabilities so much. It’s really like an extended family. We really come together. There’s just nobody like the Players.”

The opening night benefit performance of “Trouble in Jamaica: A Stinking, Dirty Musical” takes place at Bay Street Theater in Sag Harbor on Saturday, December 10, at 5 p.m. Tickets are $75 for reserved seating, $50 for general public and $30 for students. For more information, call 631-726-4609. For tickets, visit eastendspecialplayers.com.

The world of playwright Anton Chekhov is one populated by conflicts that, on their surface, ... 19 May 2022 by Annette Hinkle

The Parrish Art Museum welcomes three new members to its board of directors — Louis ... by Staff Writer
×