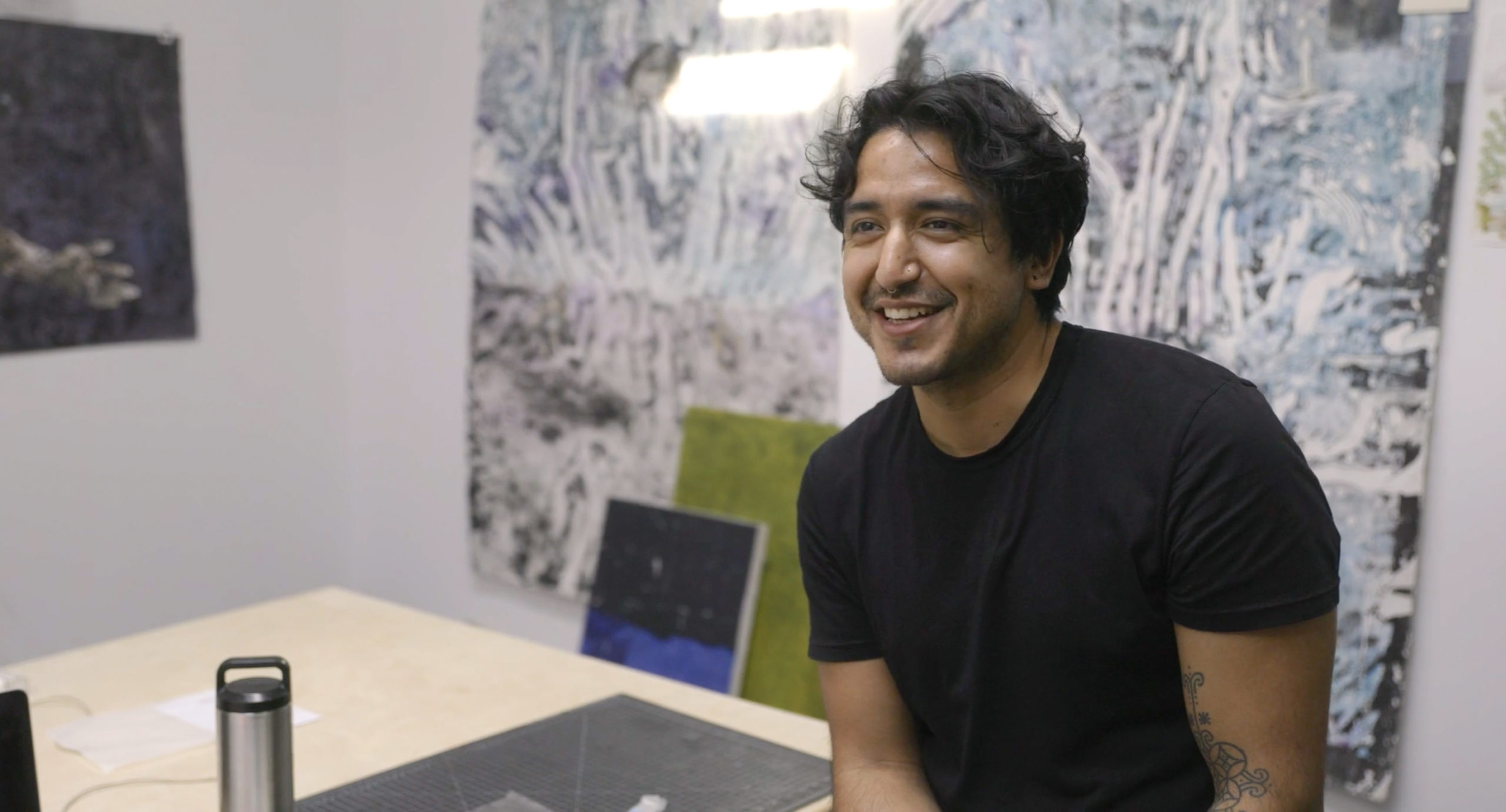 Artist Felipe Baeza as seen in Kelcey Edwards’ documentary "The Art of Making it." 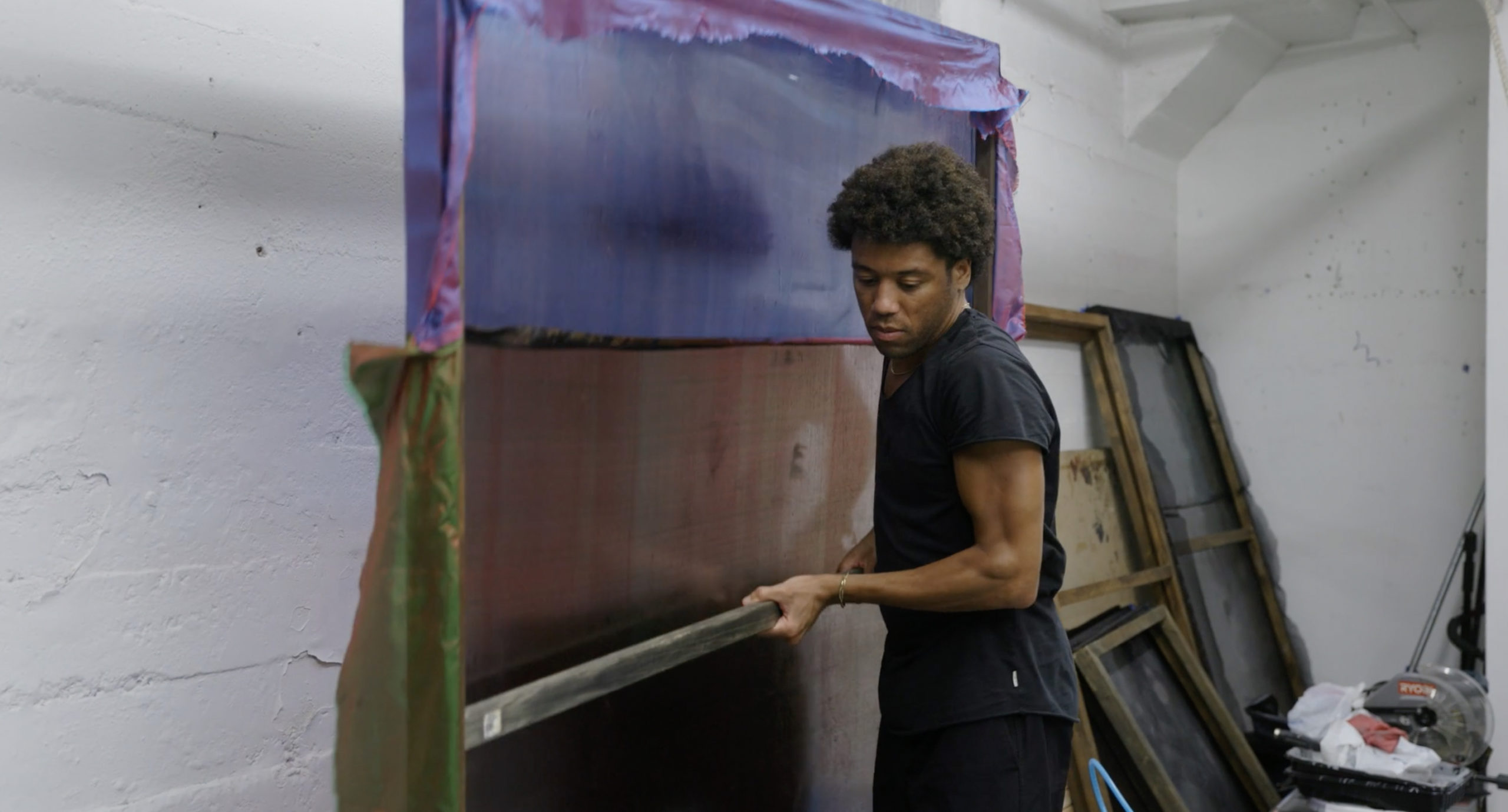 Artist Chris Watts as seen in Kelcey Edwards’ documentary "The Art of Making it. " COURTESY OF WISCHFUL THINKING PRODUCTIONS 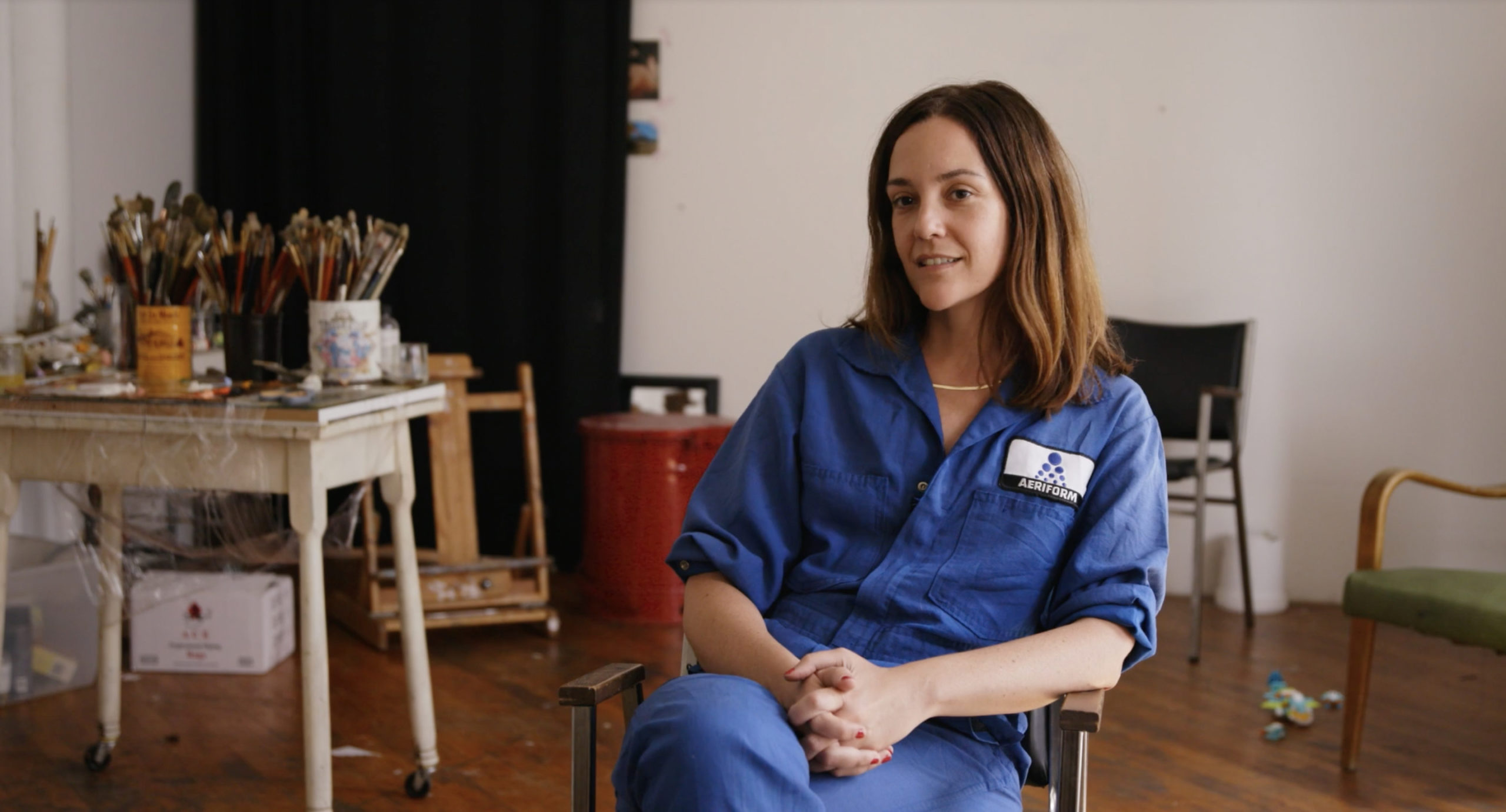 Artist Jenna Gribbon as seen in Kelcey Edwards’ documentary "The Art of Making it." COURTESY OF WISCHFUL THINKING PRODUCTIONS 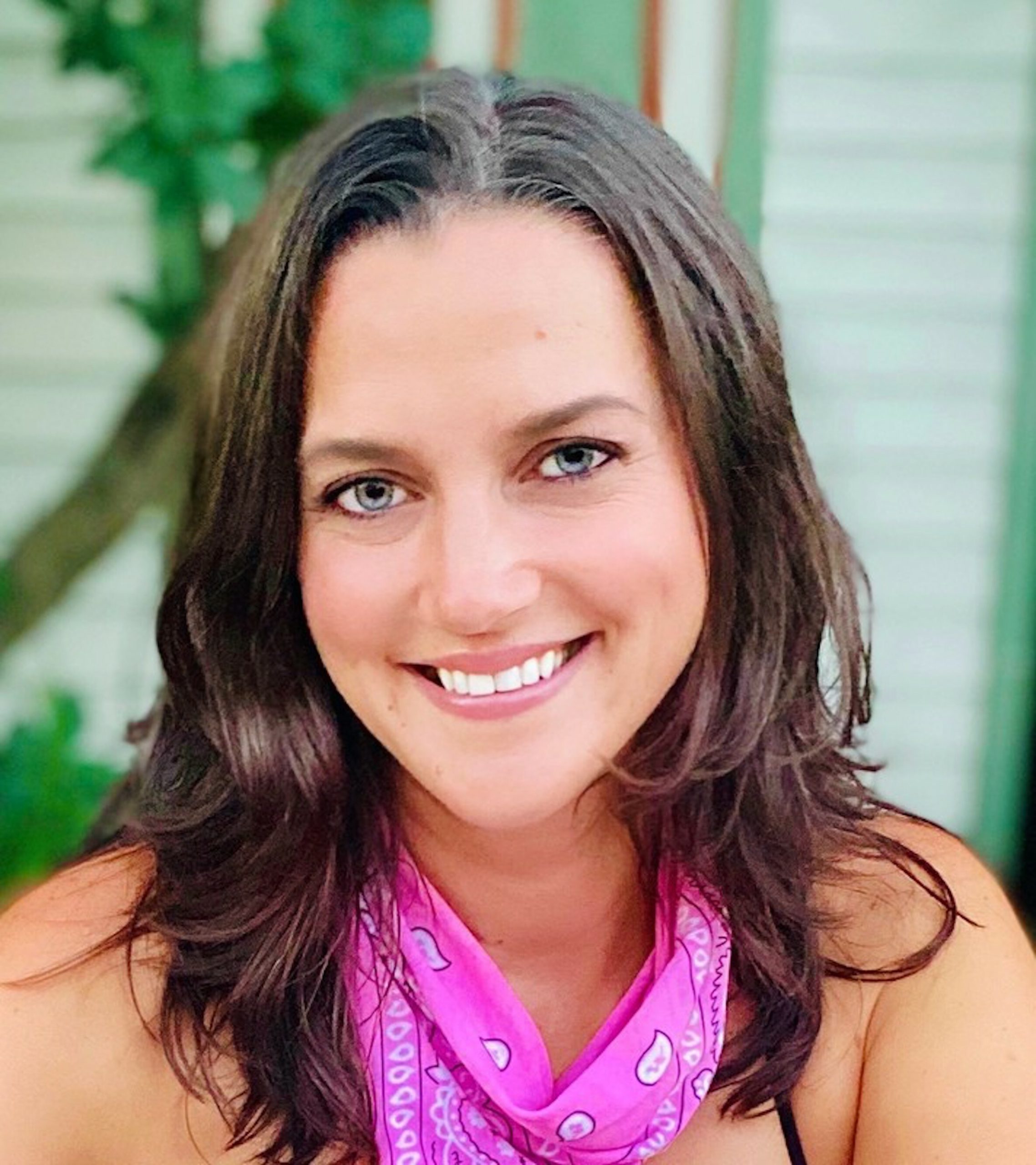 Kelcey Edwards, director of "The Art of Making it." BEN SEGAL 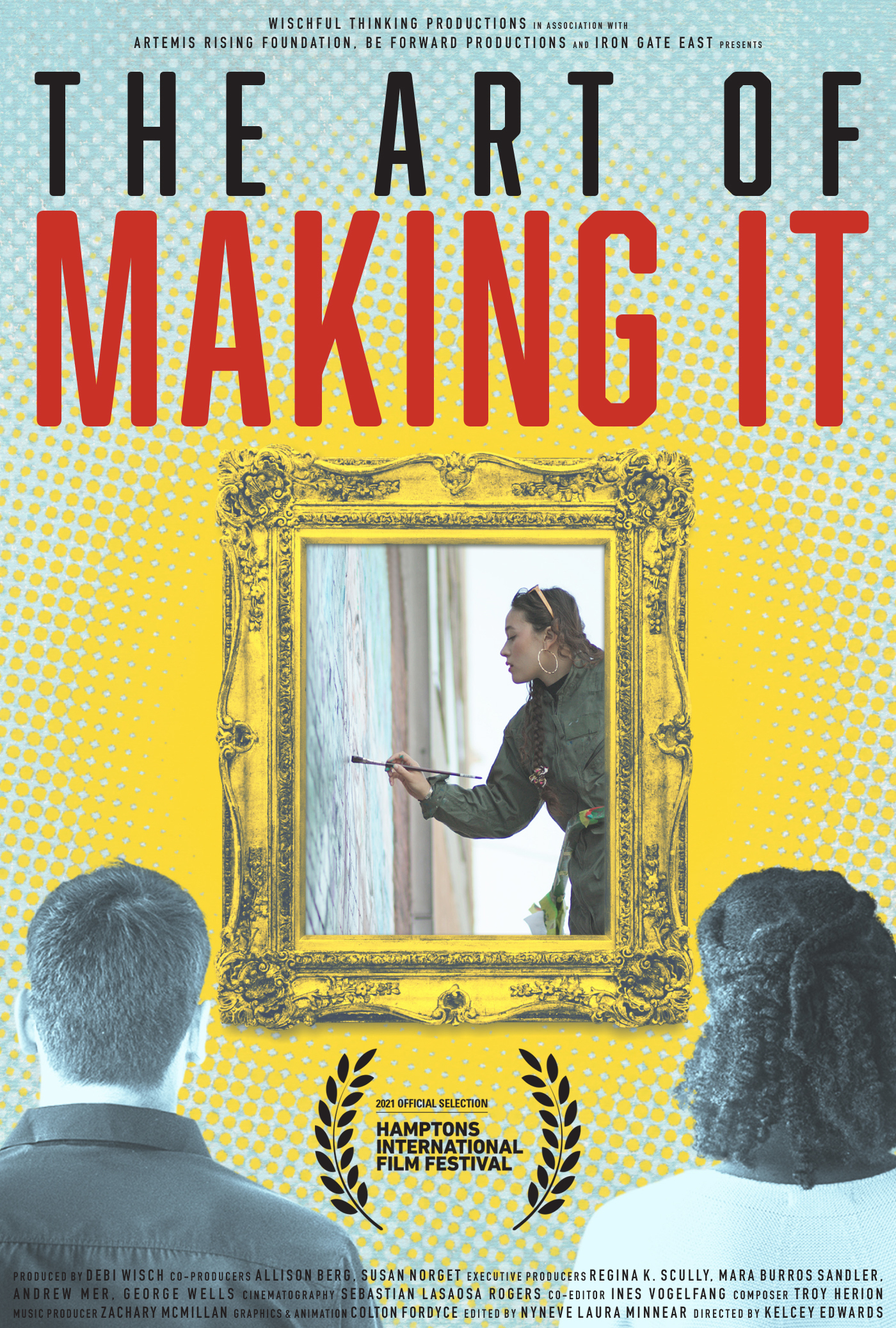 Poster for Kelcey Edwards film "The Art of Making it." 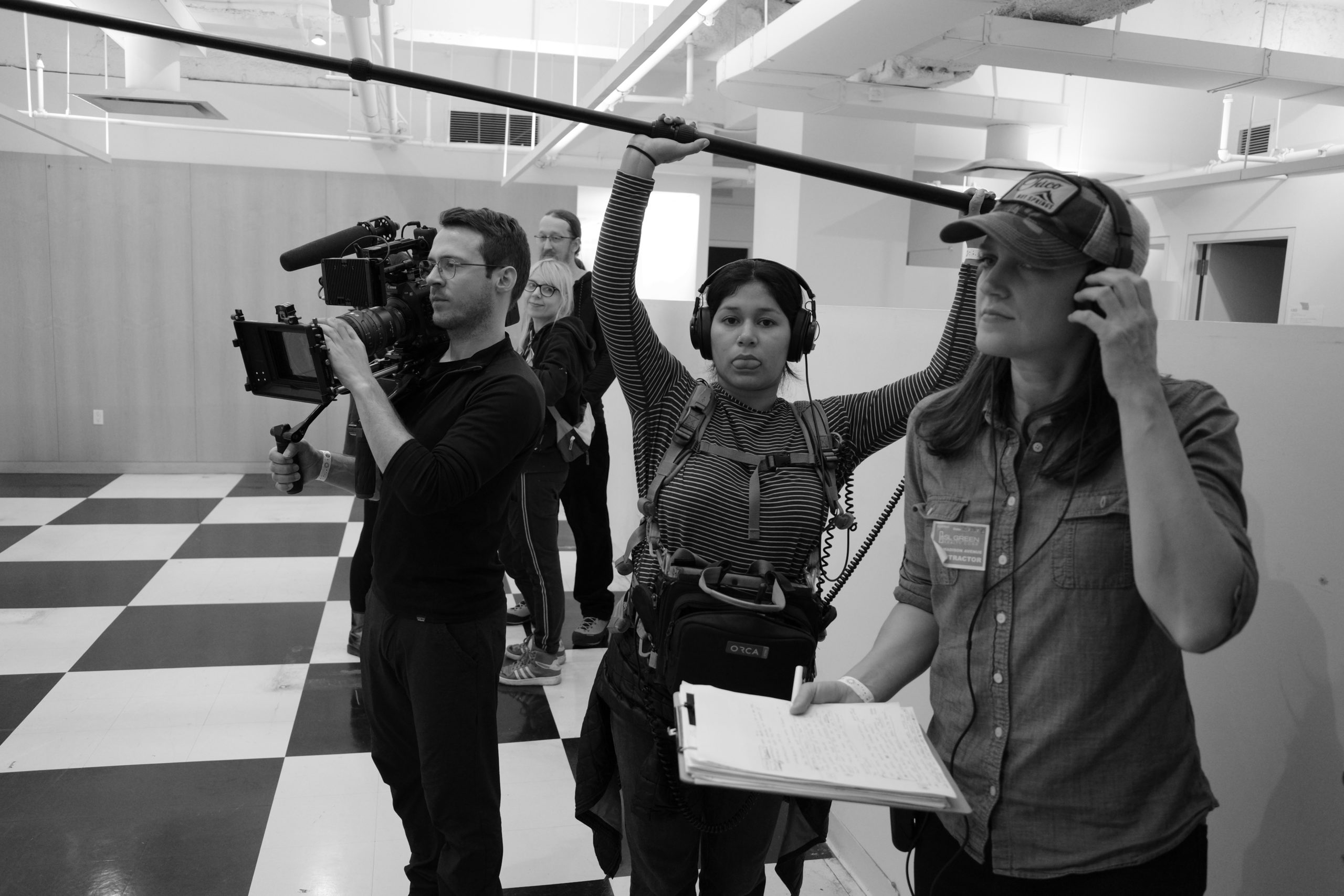 Behind the scenes of "The Art of Making It" with director Kelcey Edwards and the crew. MATTHEW HEYMANN 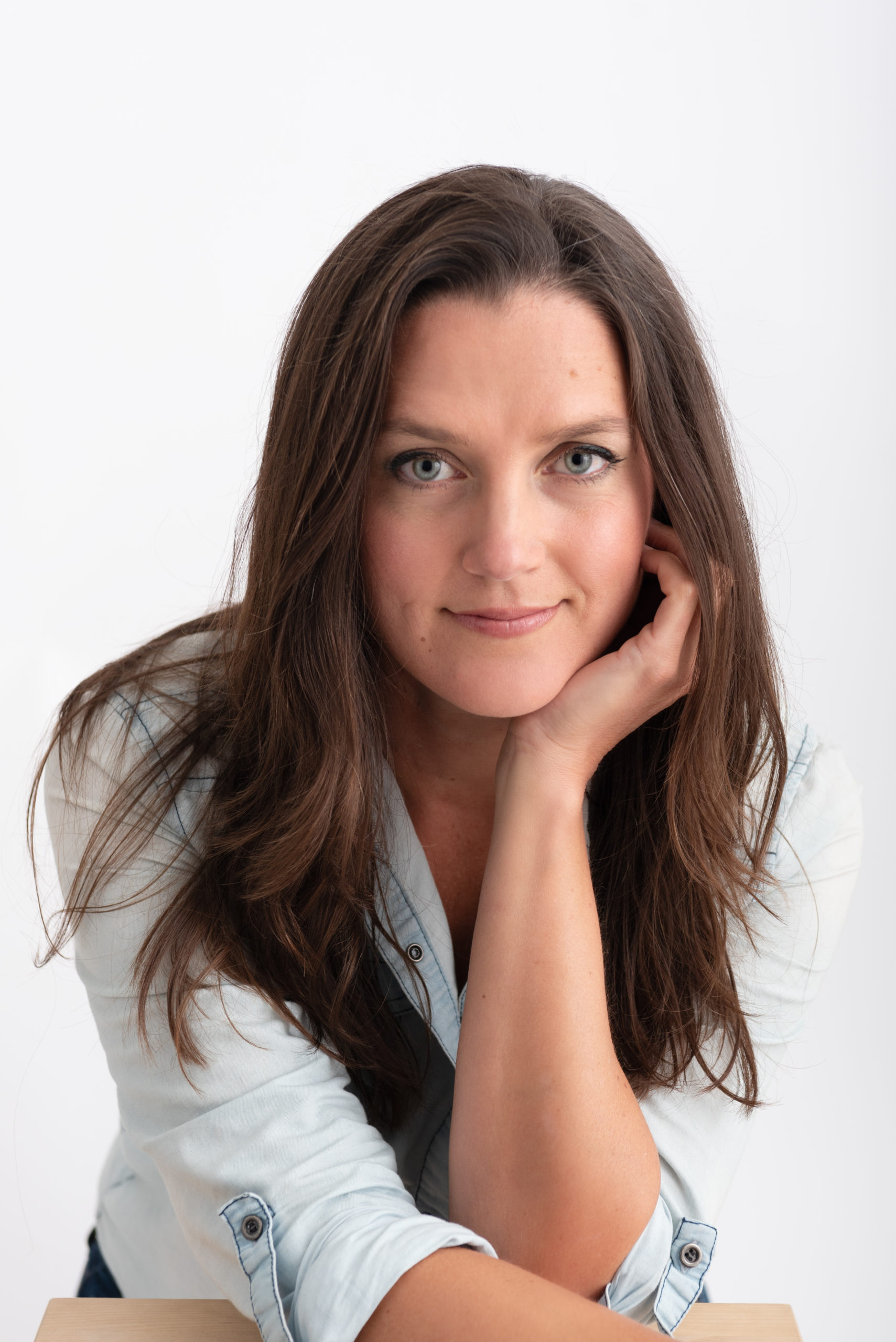 Kelcey Edwards, director of "The Art of Making It." © 2021 KELLI HULL PHOTOGRAPHY 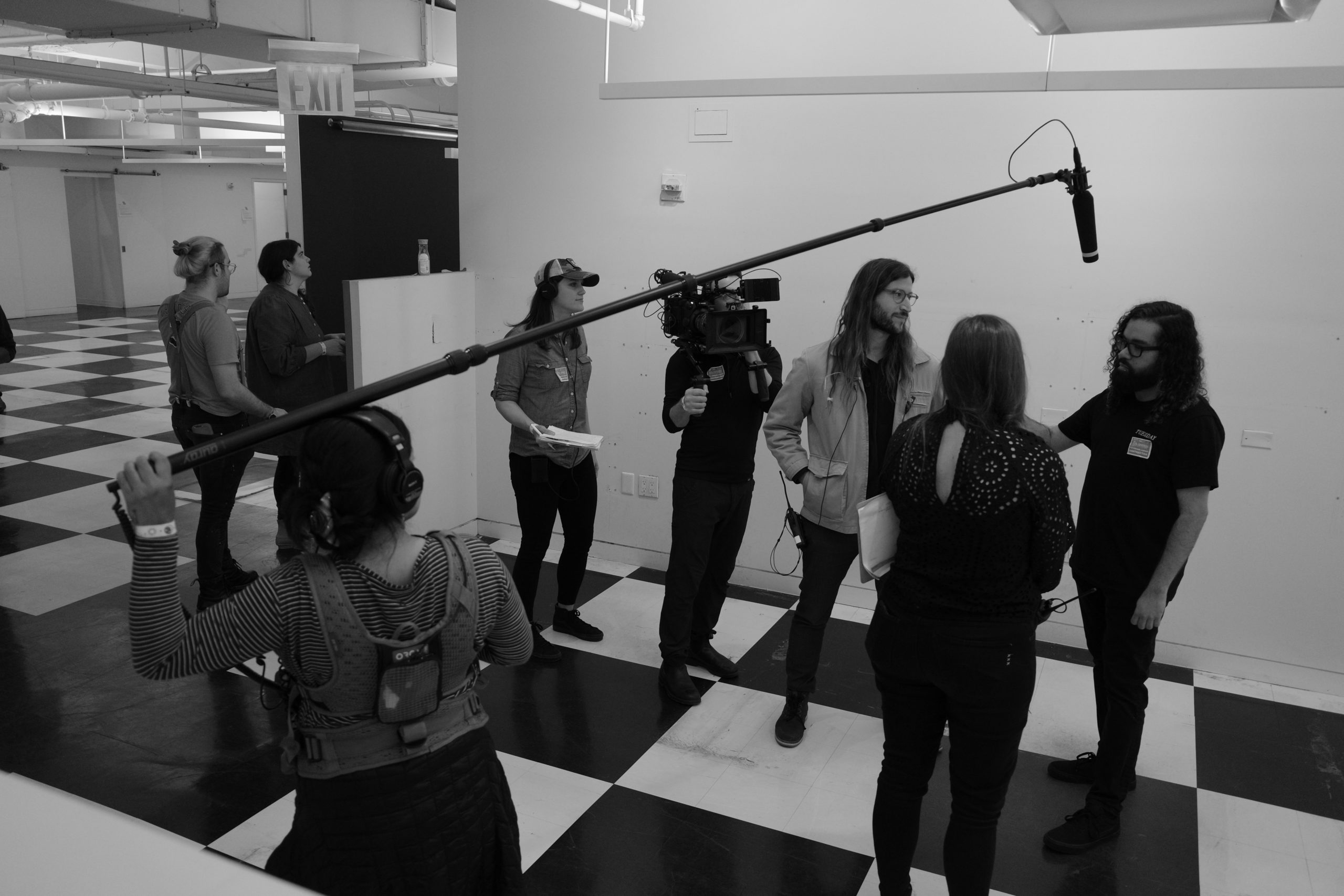 Behind the scenes of "The Art of Making It" with director Kelcey Edwards and the crew. 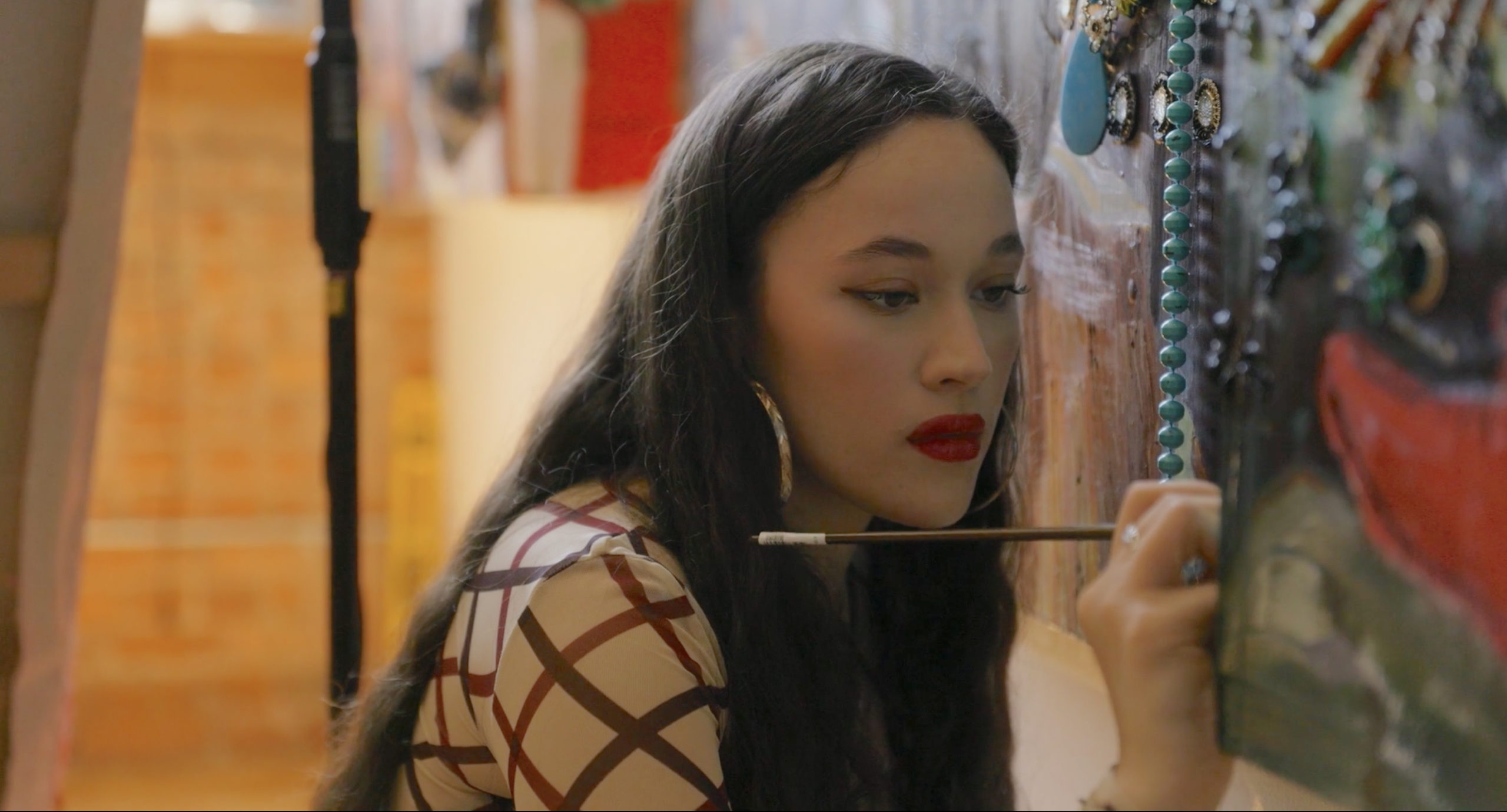 Artist Gisela McDaniel as seen in Kelcey Edwards’ documentary "The Art of Making it."

By her mid-20s, and by her standards, Kelcey Edwards lived comfortably. The curator had a steady job as co-founder of her gallery, Iron Gate Studios, and a nice apartment in Austin, Texas.

Life, as she knew it, was good — and then she left it all behind to pursue her MFA in film at Stanford University in California.

That move represented a turning point, Edwards recalled during a telephone interview from her home in Quogue. It is where her present-day story truly begins — and how the seeds of her newest documentary, “The Art of Making It,” got planted.

“It’s a conversation starter,” she said. “That’s what this film is meant to be.”

Set against the backdrop of a culture in crisis, the documentary — which will make its world premiere on Sunday at the Hamptons International Film Festival — is both a love letter to persevering artists and a powerful condemnation of the American art world. The cautionary tale explores what could be lost if value systems aren’t reconfigured, especially now as galleries, universities and museums face cataclysmic changes.

“When there’s so little transparency in the art world, it’s hard to keep people accountable,” Edwards said. “That’s why I fell in love with everybody we spoke with because there are so many people in our cast who are speaking truth to power — and saying what nobody else is willing to say out loud, in front of a camera no less.”

By following a diverse cast of up-and-coming artists at defining moments of their careers, as well as critics, collectors, professors, curators and more, the film takes a deep look at whether the systems intended to nurture young talent — such as MFA programs — are ultimately failing them instead.

“It’s something I’ve lived,” Edwards said. “I went through a very humbling period in my 30s.”

After graduating from Stanford, which boasts one of the top film programs in the country, Edwards moved to New York. It was 2008 and, at age 30, she couldn’t find work that supported her lifestyle, despite producing the independent documentary “Wonder Women!” that launched her career.

“It took us four years to make that film. While I was doing it, I was waiting tables again,” she said. “I never thought I would be with an MFA living in New York, producing a documentary feature and bartending. It just felt so regressive and frustrating.”

In hindsight, those were better times than they are now, she said. Students today are graduating with loans that double hers, she reported, while the cost of living has only skyrocketed.

“I started fixating on those problems and thinking, well, are we setting ourselves up as society where the only people who can afford to be creatives are already wealthy?” she said. “Or, are we keeping them so on the brink of poverty that they are completely reliant on this modern-day aristocracy, this patronage system?”

Once she realized that these questions would anchor her film, Edwards and the film’s producer, Debi Wisch — who has a home in East Hampton — started scouting for compelling characters and stories.

What they found exceeded all expectations.

There’s “Dreamer” and DACA recipient Felipe Baeza, whose paintings and printmaking center on migration, displacement, and self-examination. Gisela McDaniel, whose work is based on healing, is a survivor who weaves oil painting, found objects, audiovisual representations and motion sensor technology to share narratives about women who have survived sexual assault.

The film also follows artist Jenna Gribbon’s unconventional and meteoric rise to fame, while mixed-media visionary Chris Watts is dismissed from the MFA program at Yale University, leaving him with student loan debt and limited career options, yet undeniable talent.

“He’s that kind of person, you can feel his character and soul through the telephone,” Edwards said of Watts. “I went to see a show he was in at Monica King and got to meet him in person, and was completely captivated by him.”

The iconic Jerry Saltz and “bad boy” of art criticism Dave Hickey — who is now in his 80s and rarely seen in the film without a lit cigarette — sprinkle context throughout the documentary, alongside experts such as educator Gordon Knox, Pace Gallery President Marc Glimcher, curator and writer Helen Molesworth, controversial collector Stefan Simchowitz, and Hilde Lynn Helphenstein, a.k.a. “Jerry Gogosian,” who uses memes to poke fun at the, oftentimes, ludicrous nature of the art world.

“One of my favorite questions to walk into these interviews with was asking people to describe what art means to them and for them, and you get different answers from all these people,” Edwards said. “Finding that personal definition for the value of it, the meaning of it, is fun. It’s poetic.”

Turning the same question onto herself, Edwards views art as, first and foremost, a process and a reflection of the world, with each artist creating a space to have a dialogue in a deeply personal way. That pursuit is nothing short of “incredibly selfless and heroic,” she said, a sacrifice that is sometimes misunderstood as quite the opposite — a form of narcissism, selfishness, or self-indulgence, when really, it’s meant for contemplation and connection.

“You’re seeing this shared humanity and it can be so inspiring. That’s what makes it art,” she said. “There isn’t really a language that can capture everything that it does. All I can say is it does more than most people understand, and I will spend my whole life trying to open people’s eyes up to that.”

Edwards and her team began shooting in 2019, traveling from New York and Los Angeles to Malibu and Detroit to meet with their talent. Her vision for a film about the art world was coming together just as she’d imagined, the director said, when the pandemic hit.

“You can’t pretend like it’s not happening,” she said. “We felt like we were kind of close to done with filming, so at that point, the entire world that we had been documenting starts to change in real time, and we realized it’s gonna take us several more months to document this unforeseeable game changer.

“At this point, we’d set up this world and we talked to all these disrupters who are saying, ‘Things need to change,’” she continued. “Well, now things are changing.”

The pandemic not only shifted the story, but it also supercharged the narrative, Edwards said. As the team edited 100 hours of footage into 90 minutes — mostly discussed and reviewed via shared screens on Zoom — the artistic and intellectual challenge proved to be exciting, she said, and highly collaborative.

“We all brought our instincts and our knowledge of this world together, and made decisions and had to hash them out,” she said. “Almost everyone who made it into the film, at some point or another, there was somebody on the team who said they shouldn’t be in it. Once you believed in a character and a storyline, you had to stick to your guns about it.”

Continuously considering the wealth, inequity, systemic racism, lack of public funding and the future of the art world has ultimately left Edwards optimistic, she said, but equally concerned that systems on the brink of destruction will only reinvent themselves.

She hopes that “The Art of Making It” will serve as a tool to spark conversations, and as a reminder that art isn’t simply decorative or a commodity — equipped with a new generation of artists on the rise that has the potential to change the entire game.

“I’m happy with the film, which is a good feeling. I watch it and still like it,” she said. “I feel good about the movie we made, but it also feels like we’re just at the beginning of the journey. It hasn’t met the world yet.”

“The Art of Making It” will screen at 1:15 p.m. on Sunday, October 10, at Guild Hall in East Hampton as part of the Views From Long Island section of the Hamptons International Film Festival. For information, visit hamptonsfilmfest.org.