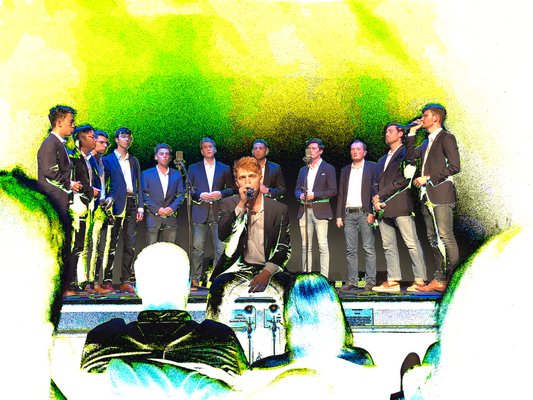 The Duke University Pitchforks, a college a cappella group from North Carolina that formed in 1979, will be heading to the Westhampton Beach Performing Arts Center (WHBAC) for their ninth year in a row on June 22. This annual concert offers Pitchforks past and present the opportunity to meet, reunite and sing together. Meeting and reuniting past and present Pitchforks was why Jacob Kuhn, from Manhattan, wanted to start the annual concert in the first place. During his time at Duke, where he studied Japanese language and literature from 2009 to 2013, he became fascinated with Pitchfork alumni.

“After my first or second year in the group, I had heard these stories about alumni in the past, like these incredible characters, with both incredible voices and personalities, guys who defined the group and made it what it was when I came,” Mr. Kuhn said in an interview over a video chat, from Berlin, Germany, where he works for Misfits Gaming.

Prior to the annual concert, the only chance to meet Pitchfork alumni was an alumni event that happened only every five years. Wanting to sing and meet the guys he had been hearing about, Mr. Kuhn decided to launch an annual alumni concert that he planned with his family at his favorite venue, WHBAC, a venue he had frequented during visits to his cousins in Westhampton Beach.

“Every show I’ve been to [at the Westhampton Beach Performing Arts Center], ever, was unlike any other show because pretty much you have this atmosphere that for some reason has every artist who goes there, no matter how big they are, feeling comfortable enough to just be so innately themselves on stage,” Mr. Kuhn said.

Nine years later, the show has grown tremendously. The second year, Pitchfork members and alumni opened for Bernie Williams, a former center fielder for the New York Yankees turned jazz and classical musician, with only 12 Pitchforks coming out to Westhampton Beach to perform. Now, Mr. Kuhn must send the invite out only two months in advance to limit the amount of performers and the show has become a family favorite.

“I meet people who say they come to the show every year, that their kids love the show,” Mr. Kuhn said. “I see a bunch of 12-, 13- and 14-year-old kids huddling around to talk to the guys and it's a weird feeling because we’re just like having the most fun on stage. You don’t realize the impact we’re having.”

Current Pitchfork member Gustavo Andrade, who is a mechanical engineering graduate student, performed his first show last year, where he says he had one of the “most fun weekends” ever.

“Not only did I get to reunite and reconnect with members of the group who I hadn't seen in a few months, but I also got to meet Pitchforks that I had only heard of in stories that were passed down throughout the years,” Mr. Andrade, said via email. “Rehearsing together with the older members is unbelievable. You get to hear guys with incredible voices and create a beautiful and powerful blend that spans different generations of Pitchforks.”

As a Pitchfork, Mr. Andrade has gotten to witness the Pitchfork’s current success, releasing covers like “Too Good at Goodbyes,” by Sam Smith and “Perfect,” by Ed Sheerin on platforms such as iTunes and Spotify and even releasing an album titled “Falling Asleep at Sunset.”

“Although it may sound cheesy, I think what makes us the most successful is that we're a family,” Mr. Andrade said. “We've become so much more than just a performing group. From the very beginning of the school year, we plan days and weekends to have fun with each other and just bond.”

Yet, the Pitchforks has experienced much success since its founding in 1979, as members have performed for the Queen of Jordan, sang the National Anthem for NBA games and have opened for The Band Perry.

Though the Pitchforks have experienced much success as of late, they are reflecting on the past because this year marks the 40th anniversary of the Pitchforks, which will be celebrated with a concert in October featuring alumni from as far back as 1979. But first, the generations of the Pitchforks will be singing at the WHBPAC.

“I hope the audience recognizes how special and important this group has become,” Mr. Andrade said. “We have come such a long way since 1979. For those in the audience who will see us for the first time, I hope they see that sense of family and the genuine love and passion that we all have for creating and performing music.”

The Pitchforks will be performing at the WHBPAC located at 76 Main Street, Westhampton Beach on Saturday, June 22 at 8 p.m. The $10 tickets can be purchased at whbpac.org.