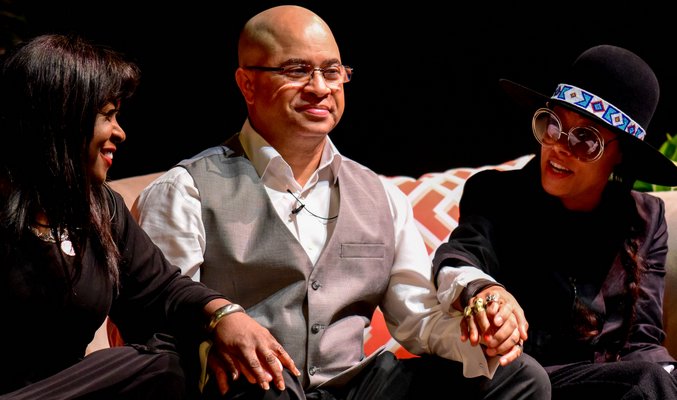 Charnele Brown had a relatively normal childhood growing up in East Hampton during the early ’70s.

As was the case with many of her peers, her parents enrolled her in just about every activity there was to offer: Girl Scouts, swimming, cheerleading. However, it was the East Hampton High School graduate’s involvement in the arts, specifically acting, that led her to a career-defining role on “The Cosby Show” spin-off “A Different World,” which will celebrate its 30th anniversary next year.

“I’ve wanted to do it since I was in second grade,” Ms. Brown said of the craft. “Discovering Stanislavski … method acting—I always wanted to be other people and not be judged, so I knew what I was going to do.”

Ms. Brown entered the landmark series—set on a college campus with a diverse cast—during its second season, in which her character, Kim Reese, was introduced as a replacement for Marie-Alise Recasner, who, along with the series’s original stars Lisa Bonet and Marisa Tomei, left after the first season.

“I enjoyed it. It was something different on television ... to have children of all colors going to college,” she said of the show’s first season. “It said, ‘College is difficult, but you can enjoy it at the same time.’”

By the time the series concluded after six seasons in 1993, it had managed to tackle topics that were never before addressed on a network sitcom, such as date rape, domestic violence and racism on college campuses.

These topics, Ms. Brown said, continue to be relevant today, which might explain the show’s revival in viewership through reruns and streaming services Netflix and Hulu.

The resurgence of the series peaked with the reunion of a portion of the show’s cast—Kadeem Hardison, Jasmine Guy, Cree Summer, Darryl Bell and Ms. Brown—at Norfolk State University, a historically black college in Virginia, in April. The reunion was orchestrated by Ms. Brown’s friend Mark A. Johnson, a vice president of SunTrust Bank, which sponsored the event.

“It’s overwhelming because we have not been together since we were canceled,” said Ms. Brown, who was blown away by the crowd of more than 1,000 fans who gathered to see the cast reunite for the first time in decades. “Mark is reintroducing us to the world.”

Mr. Johnson, who was born and raised in Southampton, said the show had a significant impact on the enrollment of young people at historically black colleges and universities like the setting of “A Different World,” the fictional Hillman College.

Ms. Brown said that while the actors were making the show they had no idea they were making history. “Back then we were just happy to be working and doing something that we love,” she said. “We didn’t understand the significance.”

The event, titled “It IS A Different World: College Changes EVERYTHING,” blew up social media, Mr. Johnson said. On Twitter, people from all over the nation wrote how the show changed their lives.

“We didn’t know how much we were appreciated because we didn’t have social media back then,” Ms. Brown said. “Seeing all the love, we were really taken aback.”

Mr. Johnson said that while growing up on the East End, education was always viewed as incredibly important in his family and community.

“Our community really focused on taking care of your own. Nobody was going to give you anything,” he said. “Education was the equalizer and opened doors.”

Ms. Brown agreed, saying that the community in East Hampton had one united objective: “to have our children be best they can be.”

“It’s instilled in me,” she said of the work ethic she learned from her family. “We all had the same dynamic and drive to do better.”

Ms. Brown continues to persevere in the entertainment industry, while running an acting school in Houston, Texas. She is also currently involved with a new sitcom called “Mercy Me,” which will begin pre-production at the end of the year.

As for the future of “A Different World,” with the social media sphere still buzzing from April’s event, Mr. Johnson said he hopes to organize more appearances at other colleges such as Howard University in Washington, D.C., and New York University in Manhattan.

Although it is now almost three decades old, Mr. Johnson said he believes that the ideas and issues “A Different World” raised are just as timely for millennials.

“It’s nice to know that kids are getting it,” Ms. Brown said. “The show is really timeless.”