Get To Know The Real 'Gulliver's Travels' - 27 East 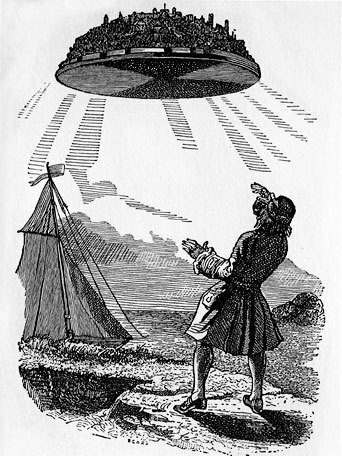 Gulliver discovers Laputa, the floating/flying island in an 1856 illustration by J. J. Grandville.

It’s been close to 300 years since Jonathan Swift published his almost instantly famous satiric fantasy, “Gulliver’s Travels,” but the narrative — a despairing, often scatological indictment of the human condition — somehow came to be considered a children’s classic, far from its intentions or effect.

On Thursday, May 20, at 11 a.m. East Hampton writer and critic Joan Baum will present “Gulliver’s Travels: A Modest Reconsideration,” a free Zoom talk sponsored by the Southampton History Museum and Rogers Memorial Library.

In her presentation, Baum will revisit Swift’s four-book work of imagination — the first two voyages often misrepresented by versions for kiddies and cartoons, the mathematical third rarely read, and the fourth arguably one of the most misanthropic pieces of fiction ever written by a reputed-to-be mad author, but whose overall theme has inspired artists throughout the ages.

To reserve a spot for the presentation, email Connor Flanagan at the Southampton History Museum at cflanagan@southamptonhistory.org or call 631-283-2494 extension 500.