‘Goat On A Boat’ Gets A New Set Of Wheels 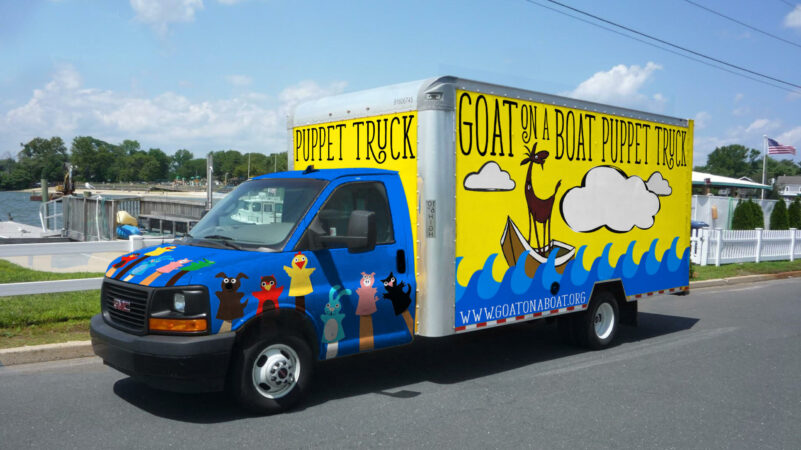 This truck was made for puppeteering, and that’s just what it’ll do! COURTESY GOAT ON A BOAT PUPPET THEATRE 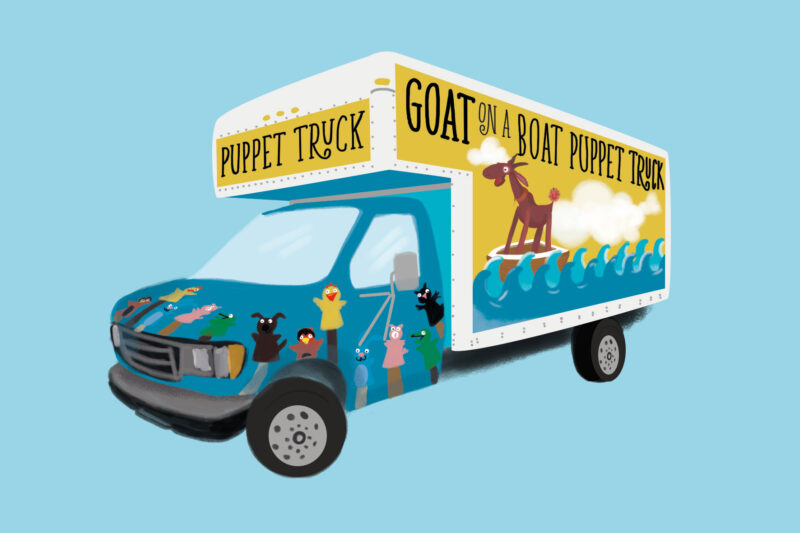 Goat on a Boat’s new ride is coming to a neighborhood near you! COURTESY GOAT ON A BOAT PUPPET THEATRE 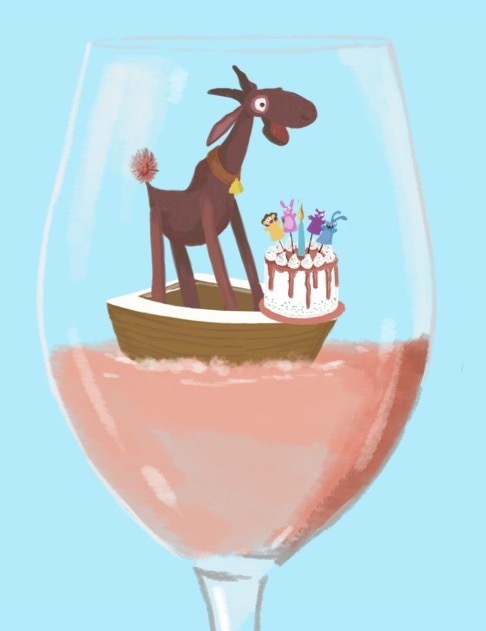 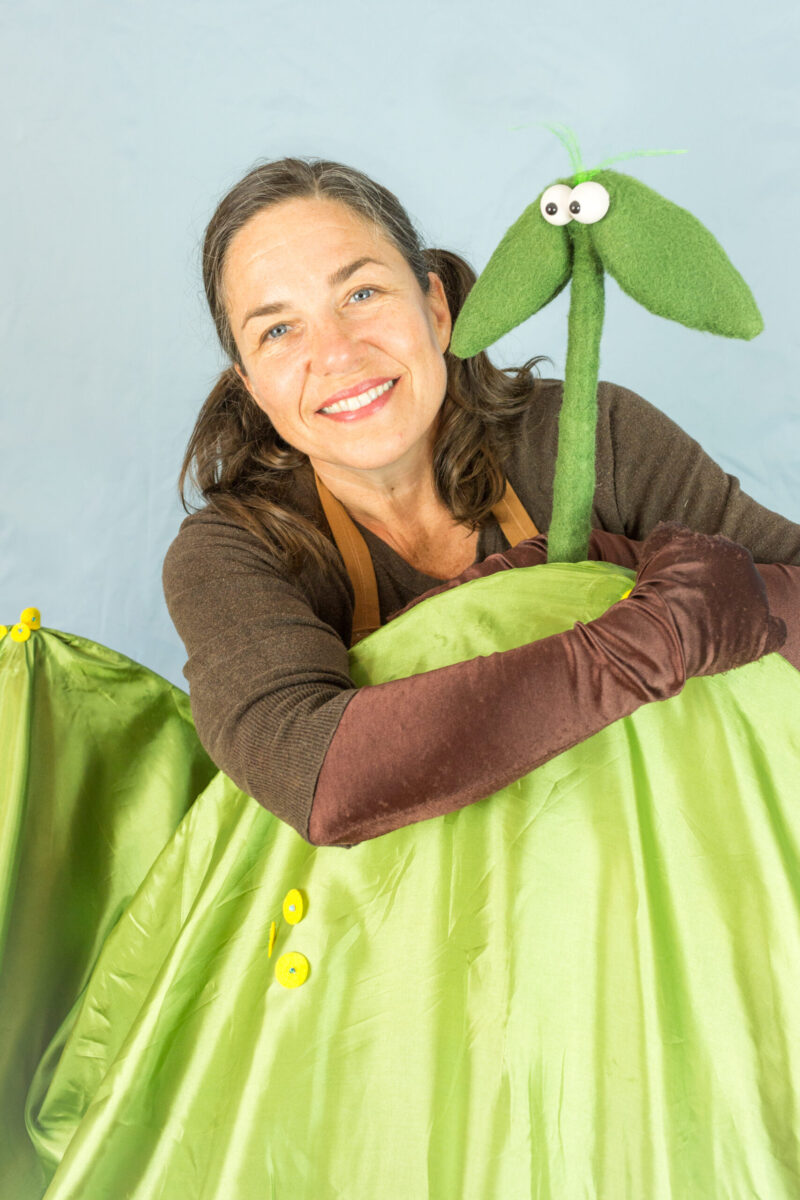 Puppeteer Liz Joyce and Sprout, just one of her many creations. LINDSAY MORRIS FOR GOAB 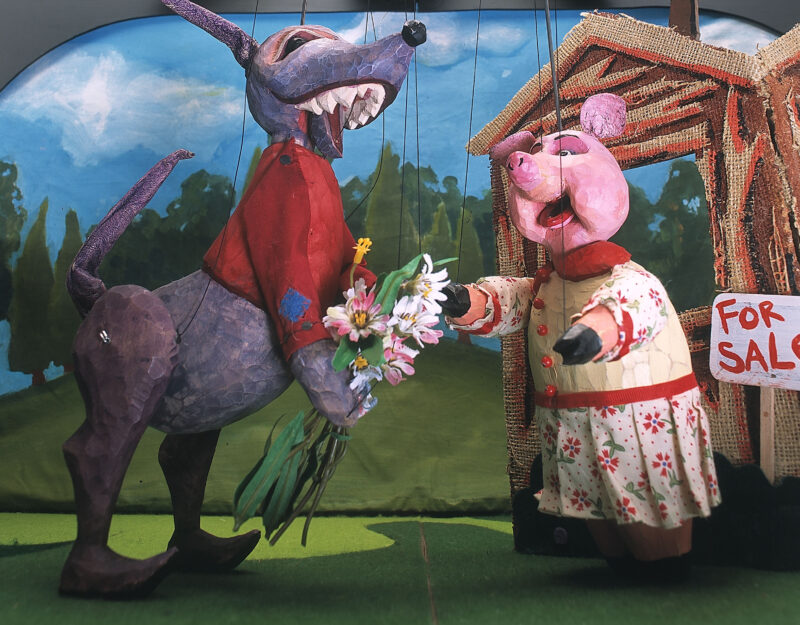 Liz Joyce speaks in many languages, in many voices, including: Bear, Frog, Princess, and Sprout. Sometimes she becomes Santa or an old-time dance hall girl.

Joyce is a puppeteer and founder of Sag Harbor’s beloved Goat on a Boat Puppet Theatre (GOAB), which she started 21 years ago to bring theater and the arts to children on the East End.

In recent years, GOAB’s home was at the Bay Street Theater. Then the pandemic shut down in-person gatherings and many of the children she, and a rotating cast of international puppeteers, entertained on Saturday mornings were forced to stay home and watch cartoons on television instead. When live entertainment and mass gatherings came to a standstill in spring 2020, Joyce got creative and started doing live puppet shows online.

“I loved that — despite the pandemic — I could be a part of this generation of kids’ lives,” Joyce said in a recent interview.

Being away from her young fans and isolated at home during the pandemic gave this creative more time to think. Along with developing some new puppet shows, Joyce considered how she could reach more children, especially those who did not yet know the joys of puppetry.

“I love all the kids and families, but I had time to reflect during COVID,” Joyce said. “I realized that our East End audiences could afford to get their entertainment anywhere.”

So Joyce focused her sights on underserved audiences in other communities, dubbing the program the “Meet Our Neighbors Puppet Show Tour.”

But in order to bring the program to life, “We needed a ‘very special truck,’” Joyce added.

With a goal in mind to build a puppet show truck, fundraising efforts for a vehicle to “take the show on the road” kicked off last June with a shopping event at Sage & Madison, a boutique in Sag Harbor. At that point, Joyce only had a mock-up image of her dream puppet truck.

“I was so inspired by Liz’s vision. The concept of bringing happiness through puppets at a time like this, when children’s lives are somewhat uncertain, is a very good thing,” said Chris Coffee, the owner of Sage & Madison.

Coffee, a child of the foster care system, is a retired ballet dancer who chairs the School of American Ballet Young Patrons Events Committee. He understands the importance of fostering a love for the arts in young people. “All kids could use puppets in their lives — and happiness — the whole thing is beautiful.”

Following the kickoff last June, the Goat on a Boat Puppet Truck fundraising effort continued online through the end of 2021.

“The fact that we were able to raise $22,000 online is a big deal for us,” marveled Joyce. “I give a lot of credit to the GOAB board for that, and it also shows community support.”

The GOAB Puppet Truck and Mobile Stage will be officially launched on Saturday, May 28, at a fundraising event at Breakwater Yacht Club in Sag Harbor. The event is not only to christen the vehicle, but also celebrate Goat on a Boat’s “21st Birthday Bash.” In honor of that “coming of age,” number, this fundraiser, which runs from 5:30 to 7:30 p.m., is adults-only and will include a “saucy” puppet show performed by Joyce and puppets, as well as a show by a visiting puppeteer. In addition, Jake Lear Trio will perform blues and roots music on the new stage.

Sag Harbor’s Maureen McMahon joined the GOAB board as its secretary last September and she serves on the organization’s event committee.

“Goat on a Boat’s new Puppet Truck and Mobile Stage is a gamechanger,” McMahon said. “And, to me, represents our organization’s ‘coming of age.’”

The idea of a roaming puppet truck may be new to East End audiences, but it’s an old-school concept with a long history. Throughout 18th century Europe, puppeteers traveled from village to village spreading — and reenacting — the news. (If a traditional “Punch and Judy” show is violent, just imagine a man reenacting a beheading, or a prisoner being drawn and quartered, with puppets.)

Though the May 28 party will see the official launch of the new puppet truck, its mobile stage will enjoy a soft launch at the Green Thumb Organic Farm in Water Mill the week before, with play groups and tot art programs beginning May 16 and running all summer long.

A trained art teacher, Joyce will perform shows and offer classes at venues throughout the region to serve the local community and raise funds. Venues will include East End Food Market in Riverhead, Mind Offline in Sag Harbor, Springs School, and Amber Waves Farm, Market & Café in Amagansett. All the details can be found on the GOAB website.

Through subsidized private shows on the South Fork, grants, foundation support, and business sponsors, once it’s up and running, Goat on a Boat’s Puppet Truck will perform in neighborhoods and communities that are often overlooked.

“We’re excited to share these performances with families who rarely have the opportunity to experience live theater,” Joyce said.

Goat on a Boat recently received a Suffolk County Office of Cultural Affairs Arts & Culture Grant. This allows the nonprofit to work with the Islip Arts Council to realize a “Build and Sing with Puppets” program with Islip, Central Islip and Brentwood high school students.

“We’ll all work together with professional puppet builder Austin Costello,” Joyce said. “And the kids team up to make music to go with their shows. Composer and sound engineer Paul Little is onboard to bring that together.”

“I began Neuma Arts Puppets as a means to be able to reach children in a creative nonthreatening but fulfilled way — to provide an atmosphere for social emotional learning through creative play, art, musical theater and movement,” explained Holder, a creative artist and teacher. She added that she finds puppetry “gives young people an opportunity to gain knowledge, and that helps develop attitudes and skills to make good choices.

“Today, thanks to our new theater on wheels, GOAB can reach so many more people,” she added. “It’s an exciting time to be part of this organization.”

Together, the two women are looking for more venues to present live puppet shows. On Saturday, June 11, the GOAB Puppet Truck will offer performances of Joyce’s “The Three Little Pigs” and Holder’s “The Birthday Wish” at Islip Community Day.

“Our research into grants and communities in need showed that the Greenport area is currently underserved — we’d love to perform more there,” Joyce said. “And ‘down the road,’ we hope there will be a ‘Puppet Truck Hudson!’”

Goat on a Boat’s “21st Birthday Bash” is Saturday, May 28, from 5:30 to 7:30 p.m. at Breakwater Yacht Club, 51 Bay Street, Sag Harbor. In addition to puppets and live music, the event will feature beer, wine, hors d’oeuvres and birthday cake plus a silent auction featuring gift baskets, goods and experiences. Adults only, ages 21 and up. Tickets start at $100 at goatonaboat.org.