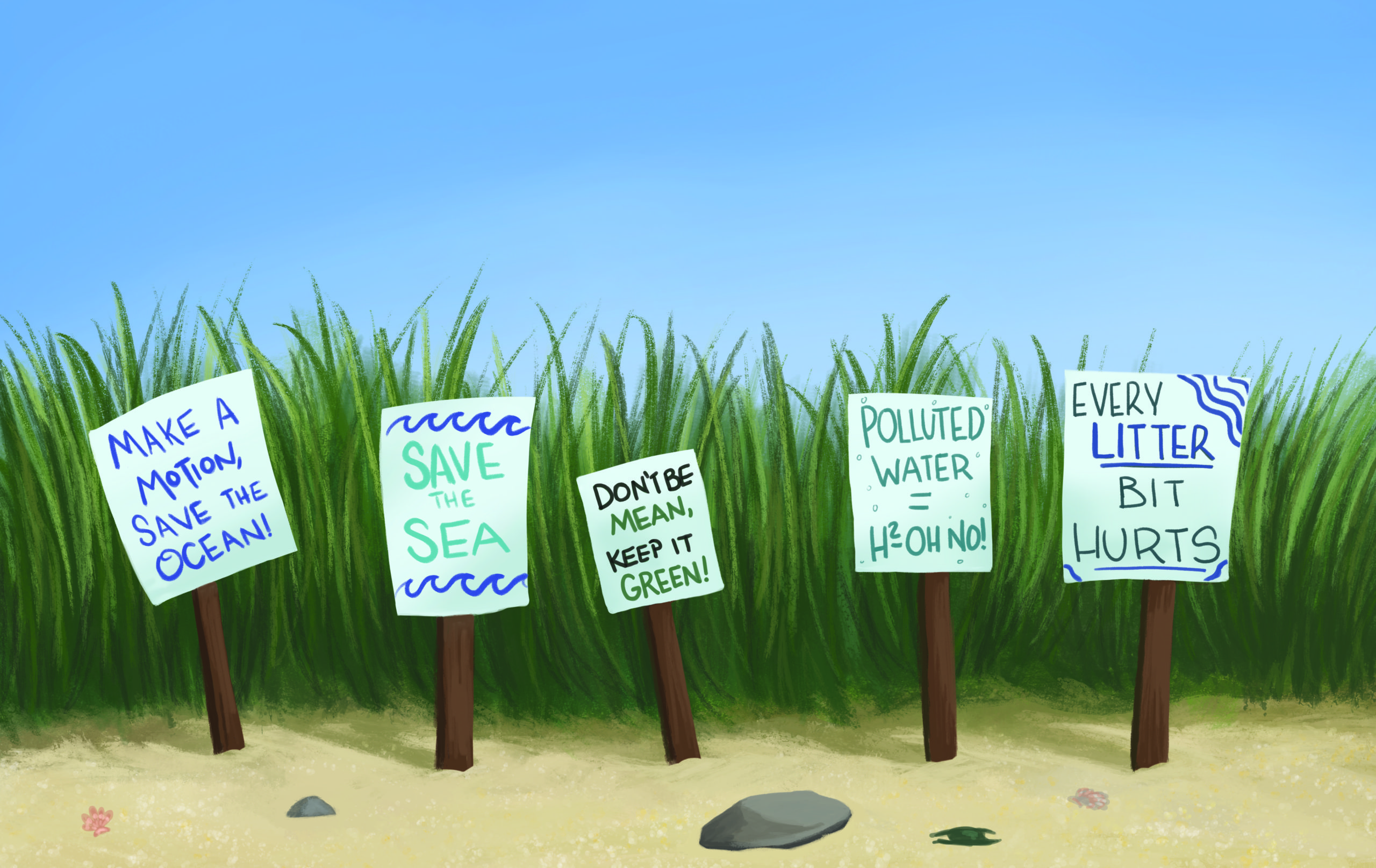 The end pages of "The Fin-Tastic Cleanup." 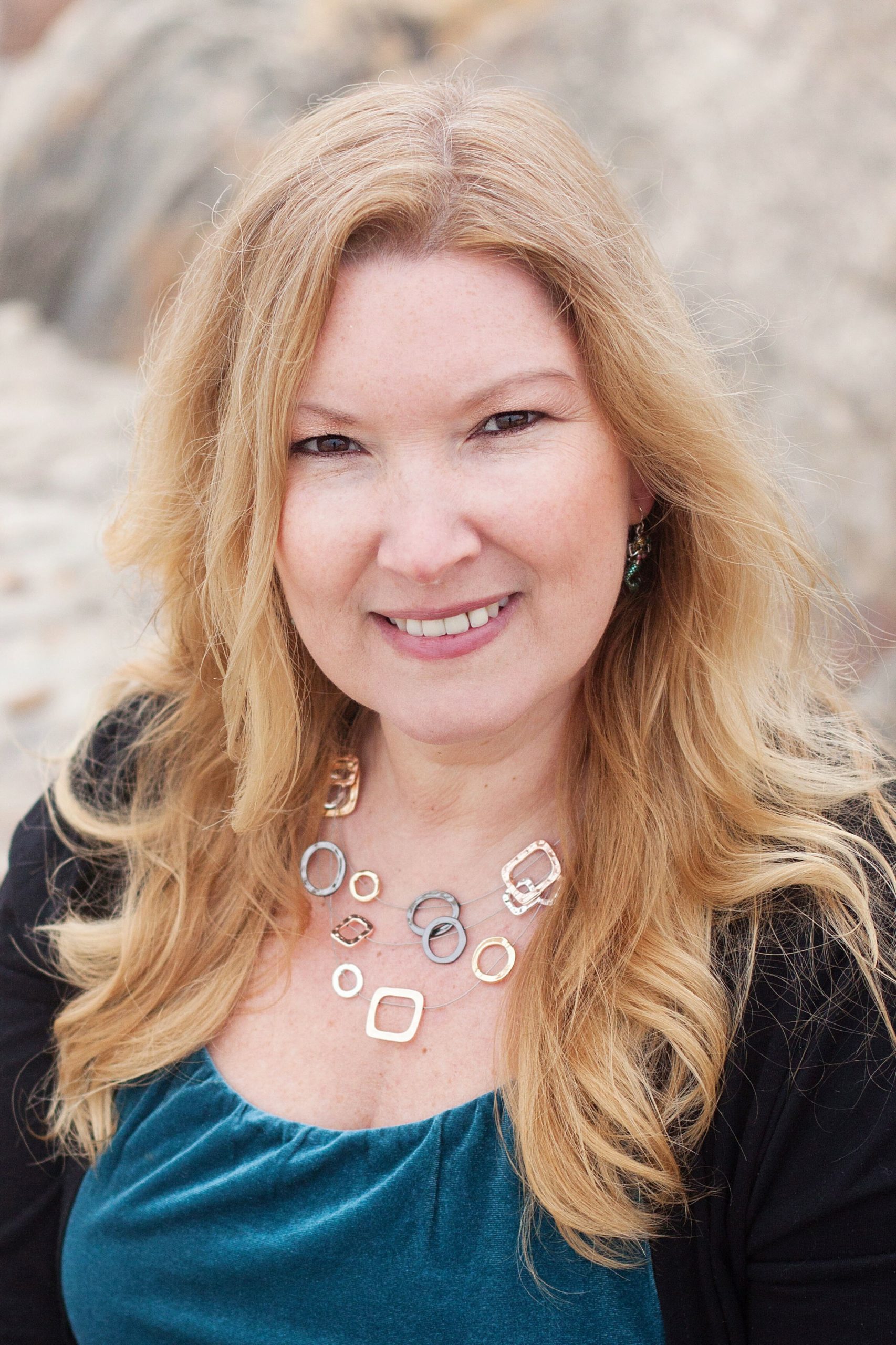 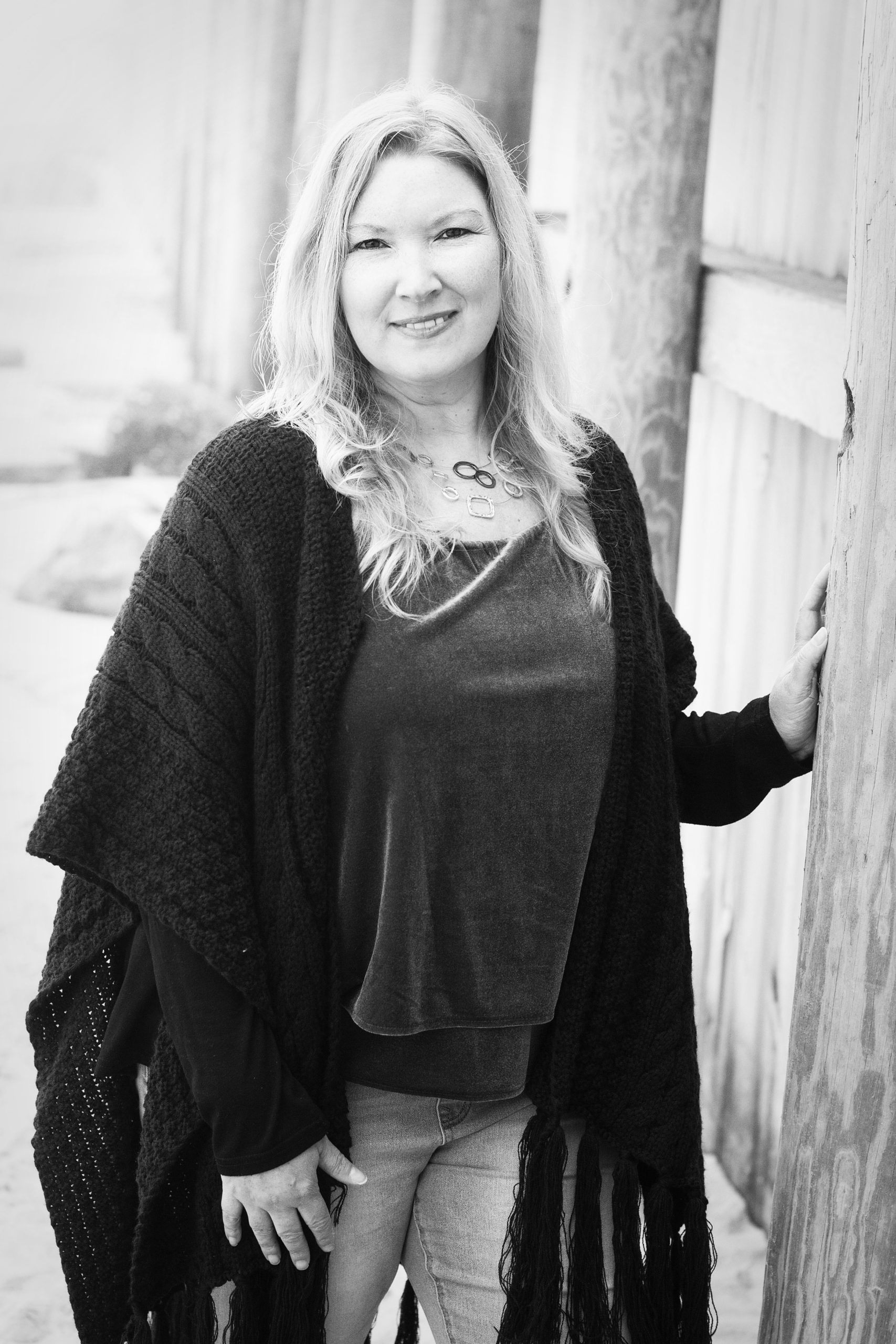 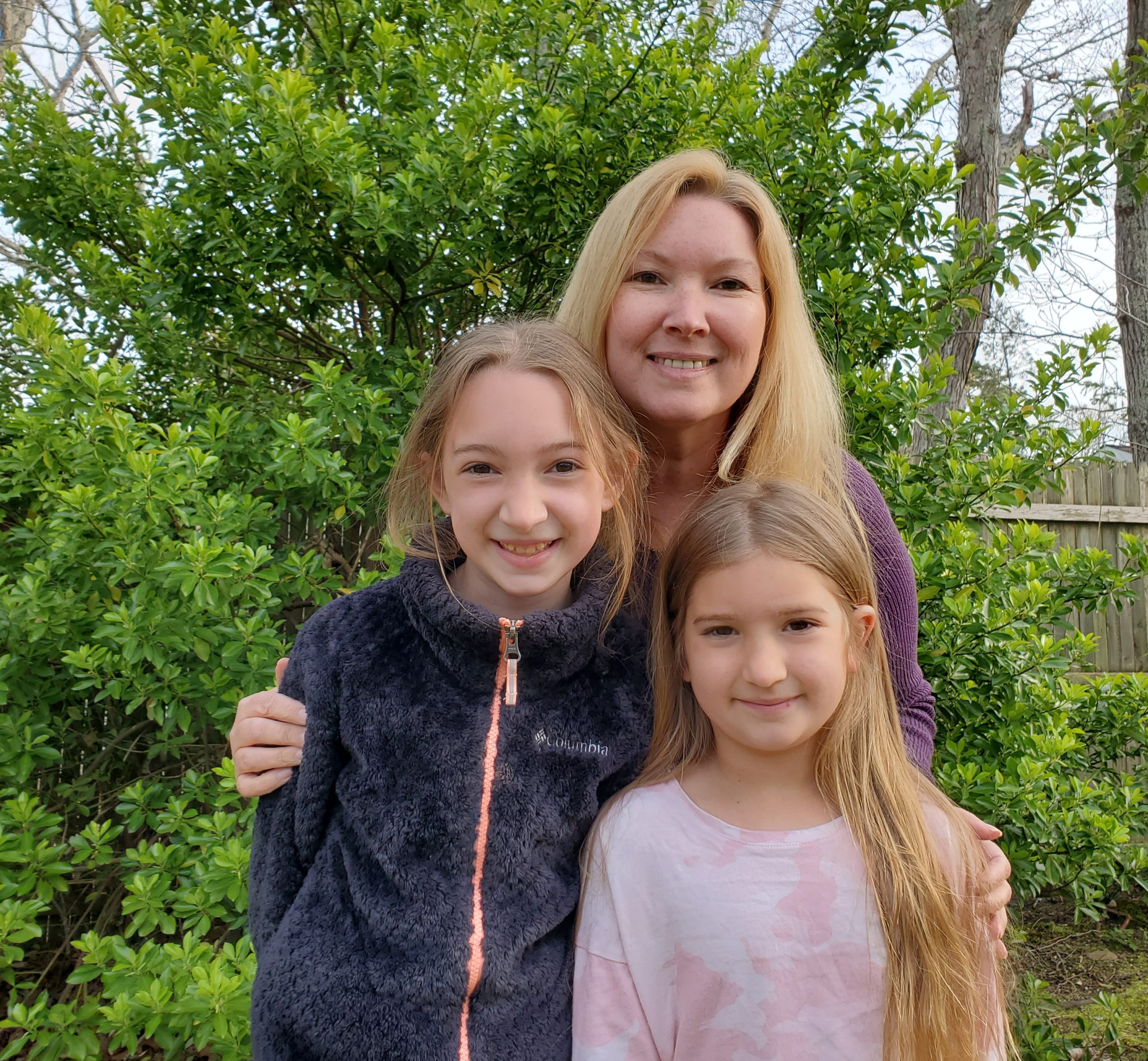 Author Laura Mancuso with her daughters Sarafina, 9, and Lucia, 7, who were the inspiration for her book "The Fin-Tastic Cleanup." COURTESY OF LAURA MANCUSO 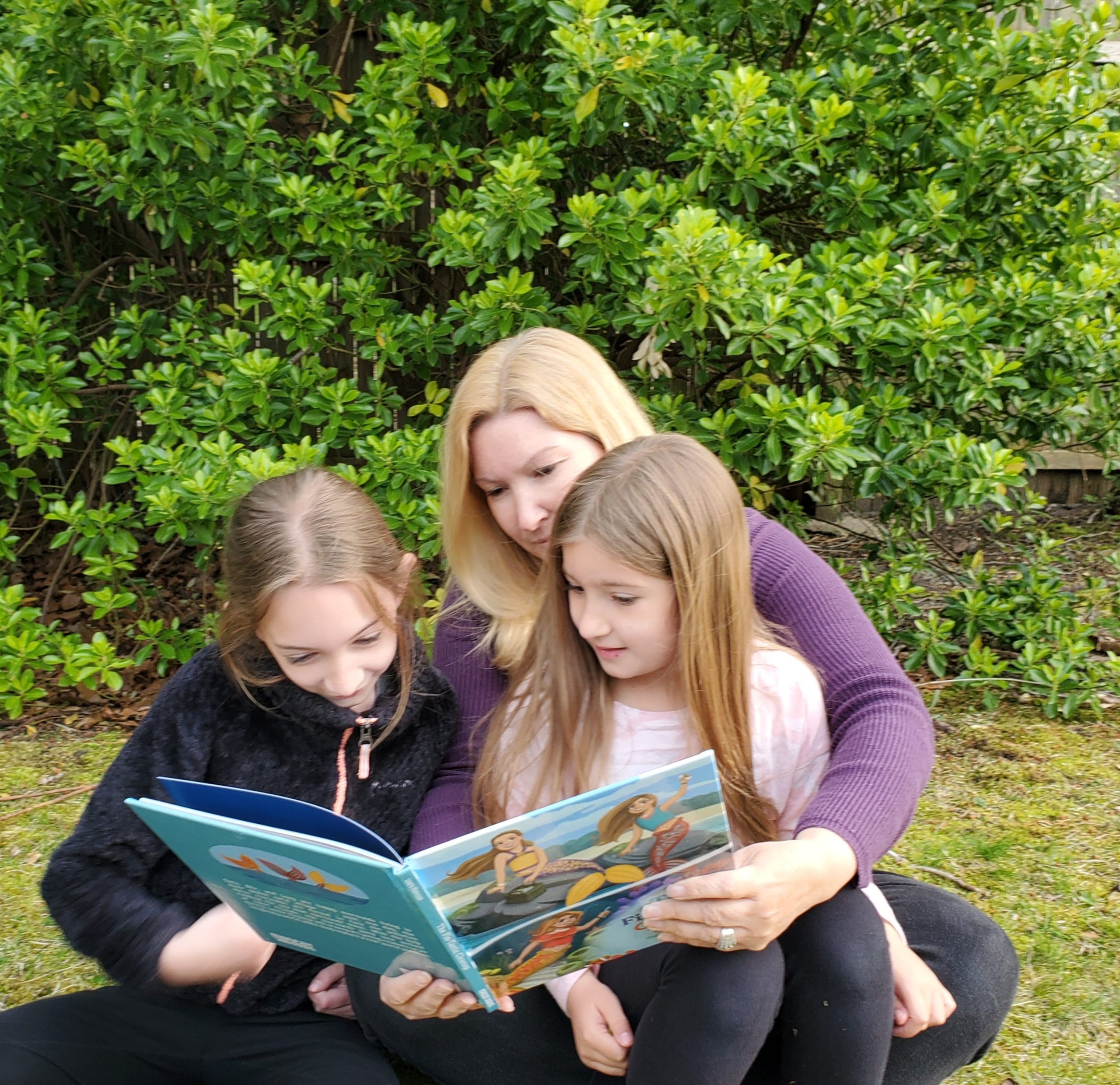 Author Laura Mancuso reading her book with daughters Sarafina, 9, and Lucia, 7, who were the inspiration behind the story. COURTESY LAURA MANCUSO

Laura Mancuso has always had a deep and abiding love for the ocean, and it’s a passion she is now sharing with her two young daughters — Sarafina, 9, and Lucia, 7. In fact, the Hampton Bays mom reports that her girls regularly stop by the wishing well in front of the local ice cream store to express their desire for just one thing.

“I wish I could be a mermaid,” they say.

Mancuso’s new children’s picture book, “The Fin-Tastic Cleanup,” features a trio of young mermaids who are based on her daughters and their close friend. These aquatic waifs — Sara, Lucy and Alix — are distressed by all the garbage they are encountering in their underwater home, so they make a pact with a group of land-dwelling human girls who are volunteering to pick up trash along the beach and together, form a surf-and-turf tag team in order to clean up their environment.

It’s an Earth Day message which Mancuso hopes will resonate with children and parents who read the story together, and at the end of the book, she provides a list of non-profit environmental organizations, some local, some national, so families can get involved in finding solutions.

Mancuso understands the attraction children have for the beach. She grew up in St. James near Long Island Sound and recalls that in elementary school, a teacher introduced her to the wonders of marine biology. Though she didn’t pursue the subject in college at the University of Buffalo — “I realized I wasn’t that great in biology,” she said — that attraction for the ocean never left her. So 16 years ago, Mancuso and her husband, Don Kelly, moved from Buffalo to Hampton Bays so she could once again, live by the sea.

“The Fin-Tastic Cleanup,” which will be released May 4, is Mancuso’s first book and it’s illustrated by Jenna Guidi, a close family friend who Mancuso has known since she was little.

“She’s a brilliant illustrator and I watched her grow over the years,” said Mancuso. “She grew up in St. James, like me. She graduated from SVA [School of Visual Arts] and recently got her master’s to become an art teacher.”

Mancuso explains that the inspiration for the story in “The Fin-Tastic Cleanup” began with a trip over the Ponquogue Bridge in Hampton Bays and her sharing with her daughters the classic fairytale “Three Billy Goats Gruff,” but with a twist.

“It started as mermaids under the bridge instead of trolls,” said Mancuso. “I thought, let’s make it a little happier. It’s funny how stories unfold and change in a thousand ways.”

While the mermaids’ story in “The Fin-Tastic Cleanup” does, indeed, have an upbeat tone and a happy ending as they find a solution to remove the debris from the ocean, Mancuso notes that her own daughters have frequently felt distressed by the garbage they encounter at their local beach.

“They’ve always noticed the trash in the water. When they were little, they couldn’t get in the ocean to get the balloons, so they’d say, ‘Mommy, go get it so it doesn’t hurt the animals,’” said Mancuso, who said she would do her best to retrieve the offending material from the waves.

Now that they’re older, she notes, Sarafina and Lucia take part in beach clean-ups with the Girl Scouts, not unlike the human characters in her book.

“They are always inspired,” said Mancuso.

When asked if she’s noticed an uptick in garbage locally as a result of the increase in people relocating to the East End due to the pandemic in the last year, Mancuso responded, “Everybody came out here and moved to their parents’ summer homes or rented, and I don’t think they have the same mindfulness as the residents who live here year ’round.

“One thing that drives me bananas is the masks,” she added. “There are so many masks and gloves all over the beach, the parking lots and everywhere. When Jenna and I were in the middle of putting the book together, we went on a bike ride and saw so many masks. I said, ‘We have to put a mask in the book.

“It’s having such an impact, and in 20 years, we’re still going to be picking these up.”

Fortunately, Mancuso is raising two daughters who are already attuned to the importance of protecting their environment and will likely stay involved with the issue as they grow into young women.

In the meantime, how do Sarafina and Lucia like seeing themselves portrayed as mermaids in the pages of their mother’s new book?

“They think it’s the coolest thing in the world,” Mancuso said.

On Saturday, May 22, Laura Mancuso will take part in The Friends of the Hampton Bays Library Kids’ Day Book Sale. The sale will be held on the lawn of the Hampton Bays Library, 52 Ponquogue Avenue, from 9 a.m. to 2 p.m. Mancuso will read “The Fin-Tastic Cleanup” at noon followed by a Q&A and a book signing. For more information, visit laura-mancuso.com or hamptonbayslibrary.org.

Some facts on ocean pollution and ways to help from Laura Mancuso’s website:

From the 33rd annual International Coastal Cleanup of the Ocean Conservancy Organization 2019 Report:

1,080,358 volunteers in a worldwide effort of 122 countries walked over 22,000 miles of coastline. They removed 23,333,816 pounds of garbage from the oceans and recorded their findings on Clean Swell or printed data forms.

Per the National Oceanic Atmospheric Administration, approximately 1.4 billion pounds of trash enters the ocean each year.

Worldwide, 13,000 to 15,000 pieces of plastic are dumped into the ocean every day. It can take 20 to 100 years for a plastic bag to break up. Plastic bags never fully break down, they just break into smaller pieces causing animals to mistake them for food. Approximately 1 million sea birds and 100,000 sea mammals are killed per year due to pollution.