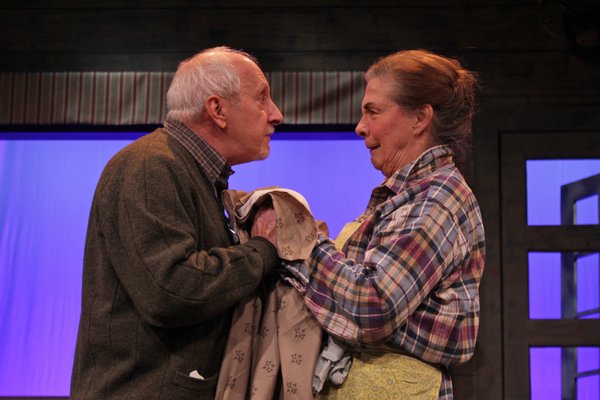 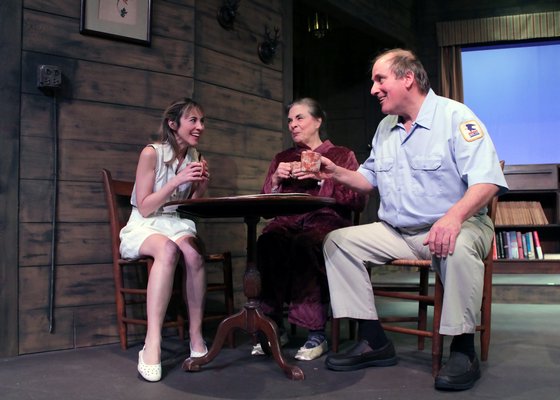 In 1981, Katharine Hepburn, Henry Fonda and his daughter Jane Fonda made a cinematic splash when they appeared together in “On Golden Pond,” a film about heartbreak and reconciliation, as a pair of aging parents and their adult daughter come to terms with assorted familial flaws and impending mortality.The film mirrored the real-life contentious father-daughter relationship between the Fondas and was considered something of a swan song for both Mr. Fonda and Ms. Hepburn, who at the time were nearing the end of their acting careers. Both won Academy Awards for their performances, and it was the last film for Mr. Fonda, who died the following year.

But Andrew Botsford would like you to forget all about that.

That’s because from January 10 to 27 he will be directing the Hampton Theatre Company’s presentation of the stage version of Ernest Thompson’s “On Golden Pond” at Quogue Community Hall. It’s a piece of theater that naturally brings up comparisons to the famous movie—and Mr. Botsford fervently hopes audiences will be able to get past those recollections and come to this show with a clean slate and an open mind.

“That’s the thing I think needs to be addressed,” Mr. Botsford said in a recent interview in Southampton. “No one knows the play because it was a big-deal movie and had the twist of Jane Fonda playing the daughter, echoing the reality of her and Henry not having a great relationship growing up.

“The end effect of that is, the play is probably a lot better, and Henry, Katharine and Jane—these huge stars—became a distraction,” he added. “But this is a very rich play. It has a lot going on in it for all of us dealing with family stuff. You put those stars and expectations in, and you miss what’s going on.”

Truth be told, what’s going on in “On Golden Pond” is an apt reflection of what’s going on in the lives of many adult children who are in the midst of stabilizing their own hectic lives while simultaneously dealing with parents in physical decline, compounded by unresolved psychological issues left over from childhood.

The action of “On Golden Pond” takes place over the course of one summer in Maine at the cabin of Norman Thayer (George Loizides) and his wife, Ethel (Diana Marbury).

Norman, a former English professor, is soon to become an octogenarian. He is already a contrarian—and a grumpy one at that. But he is obviously becoming increasingly frail. So Ethel does her best to protect him and keep him safe.

Chelsea and Billy share the news that they are heading off to Europe and ask to leave Billy Jr. in the care of Norman and Ethel while they are away. In the weeks that follow, Norman and the boy, who is struggling with the effects of his parents’ recent divorce, form a strong bond.

Also making occasional appearances at the lake house is Charlie (Paul Bolger), who delivers the mail by boat and has harbored feelings for Chelsea since their youth.

It’s a simple enough construct, but beneath the surface there is much material to mine.

The complications of the Thayers’ idyllic lakeside retreat lie not only in the interpersonal relationships between parents and children, but also in the obvious elephant in the cabin: Norman’s failing state of mind and health on the edge of his 80th birthday.

In one scene, Ethel sends Norman out to pick berries, only to have him return quickly in a frightened and flustered state. He admits that he had forgotten who he was and became disoriented, and searched out Ethel for grounding.

“This text is spare in a lot of ways, and it doesn’t dig deep. It’s a show, don’t tell,” Mr. Botsford explained. “We’re not setting out to break molds. We’re doing our best to make this play stand on its own and the richness of connections in it.”

For that reason, a primary goal for Mr. Botsford, as a director, was to get each of his cast members to consider the unspoken truth of his or her character in order to add depth to their external motivations. Before the first read-through, he explained, he wrote down questions for the actors to consider in approaching their characters.

For Chelsea, Mr. Botsford’s questions focused on her sour relationship with Norman, and he asked when things went wrong between the two of them, and what was the nature of their original dispute.

“I typed out the questions and put them in envelopes for each of them,” Mr. Botsford said. “This is what we do as actors, and I’m sure some of these questions they had asked themselves already. I said, ‘If you want to talk about it with me, that’s great, or other actors, or not—just to get on the path.’”

Like any good play, finding the path through the hidden back story is what brings the script to life, adding layers of depth to even the most subtle of lines.

“If you take these questions and go to the text, it will give you a map and some road signs to answer these questions,” he said. “But it’s not explicit—it’s a two-way street. If the text gives you clues and you get to the answer, it goes back and enriches the text. Now it has a life of its own.

“To fully inhabit the characters, you have to ask the questions and go to the text to look for the answers,” he added.

One word that is not mentioned in the script is “Alzheimer’s,” a term not widely used in 1979 when the play was written. But it’s obviously what Norman is facing, and Mr. Botsford explained that the berry-picking episode reveals that his hard exterior is just a mask for fear of his impending death.

“He’s angry because he’s fearful, which is true of every Alzheimer’s patient I’ve ever seen,” Mr. Botsford said.

Dealing with it all is Ethel, who remains the picture of positivity in this beautiful place that she has shared with her husband for decades, even as she sees him slipping away. Not unlike the loons—the birds that Ethel is particularly enamored with, who call to one another on the lake in a subtle, yet moving, touchstone of the script.

“The loons, like husband and wife, are mated for life,” Mr. Botsford said. “That’s what the call means. ‘I’m here … where are you?’ Usually, there will be an answer, ‘I’m over here.’”

For Norman, it’s a call that validates life and existence itself, and a metaphor that will strike a chord for all who understand what it means to have loved someone who is on their way to being lost.

A lunch-and-theater package is available with the matinée on Saturday, January 26, with lunch at 12:30 p.m. at The Quogue Club at Hallock House, followed by the show. The cost is $65. Other dinner theater packages also are available.