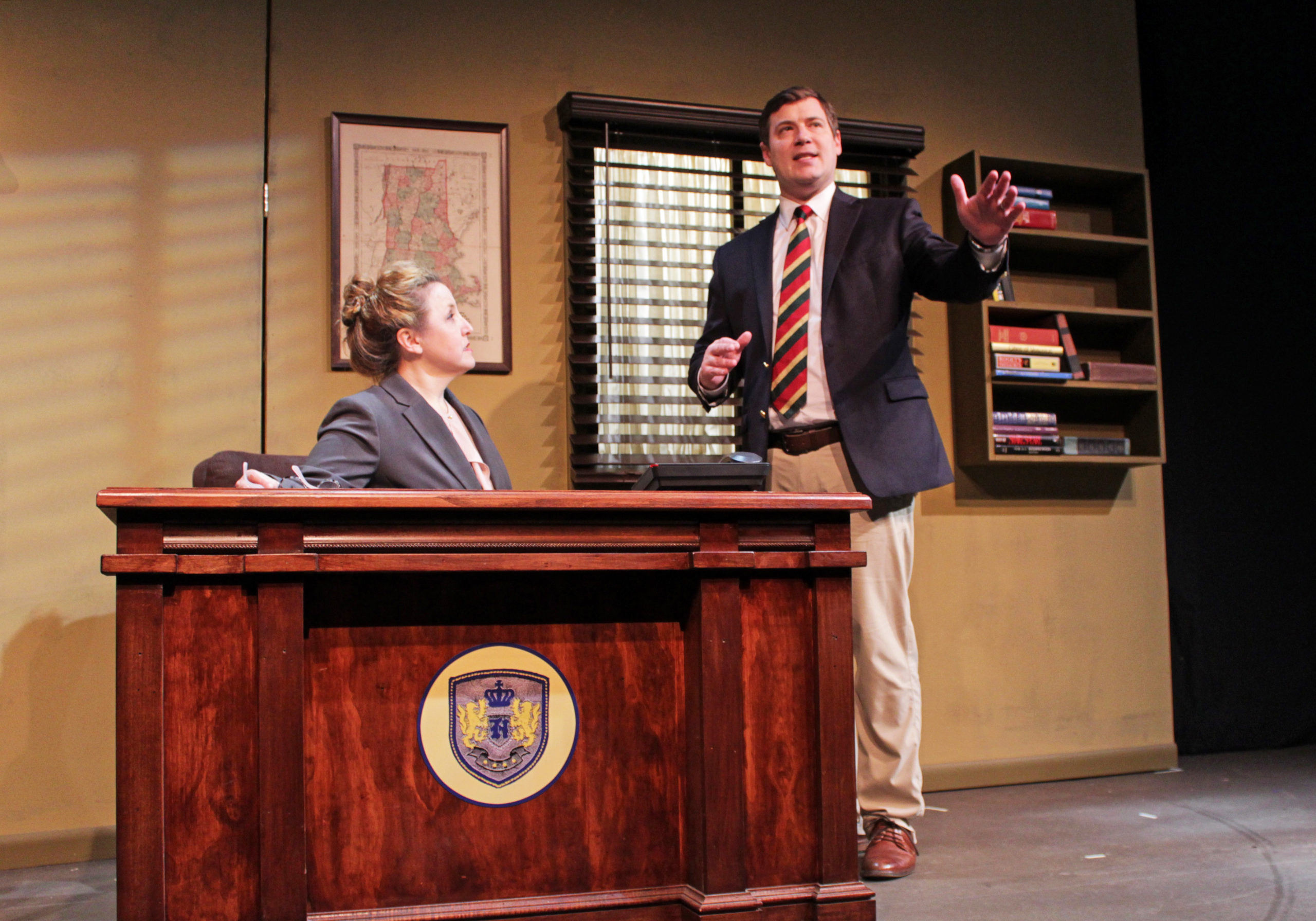 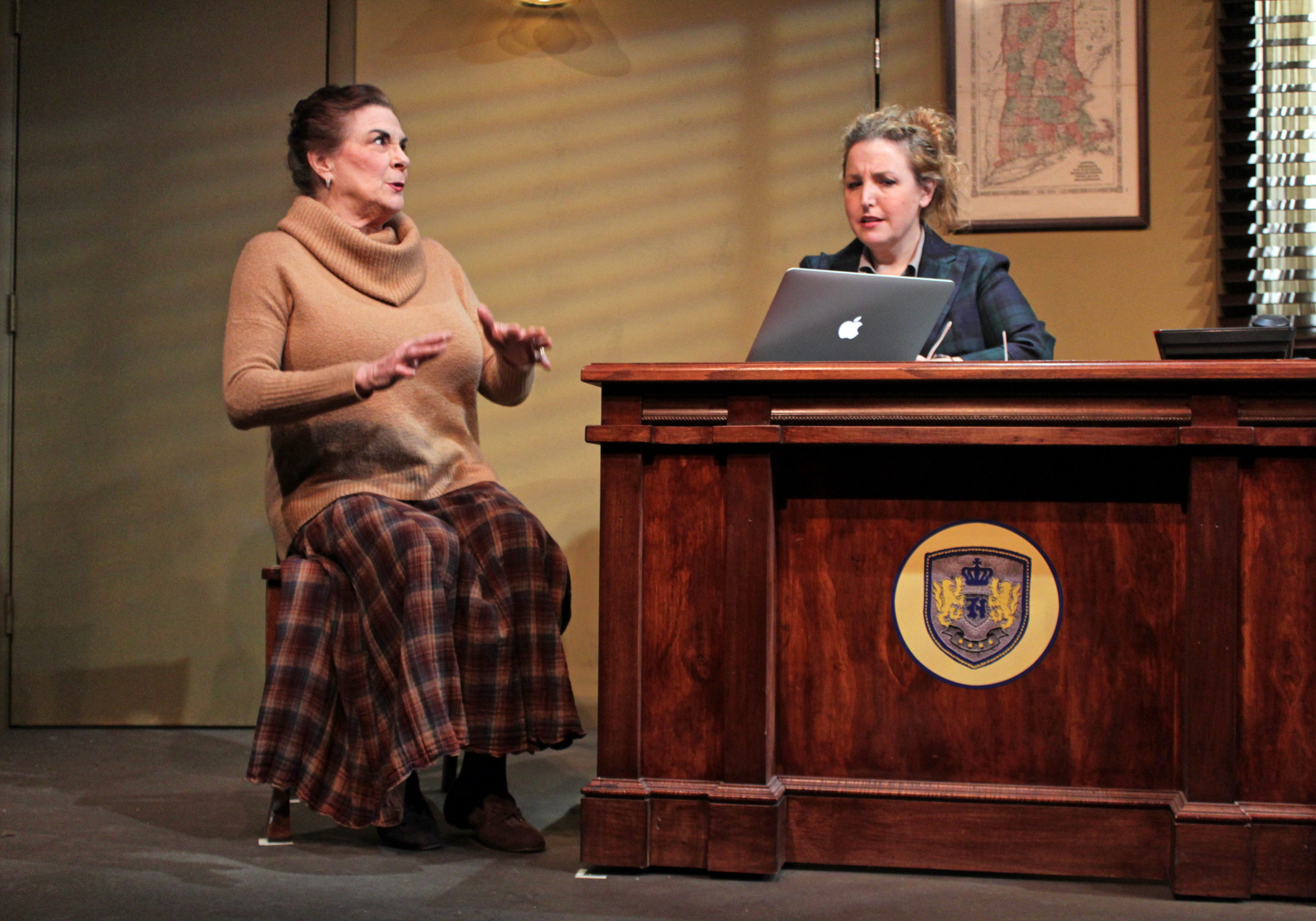 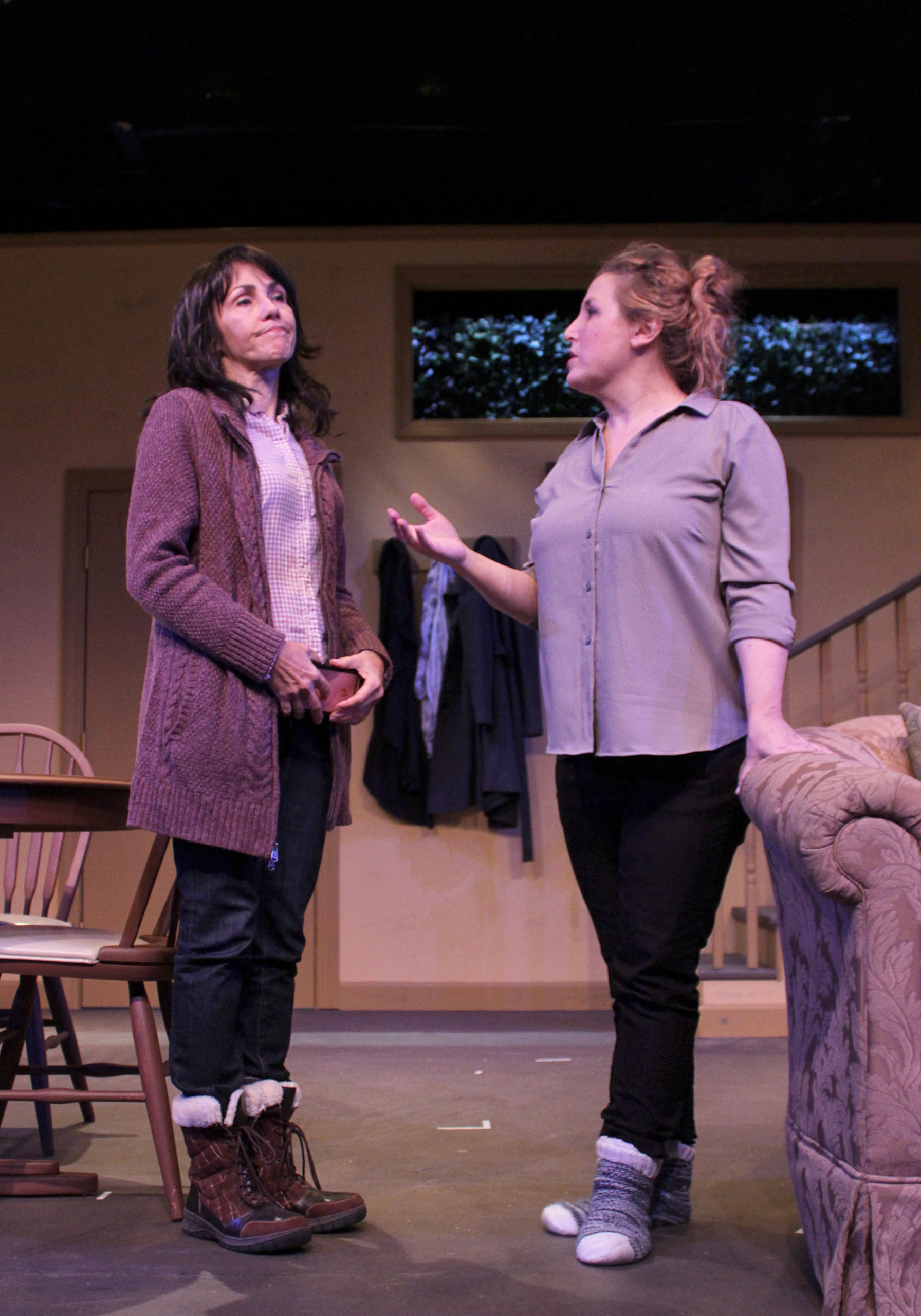 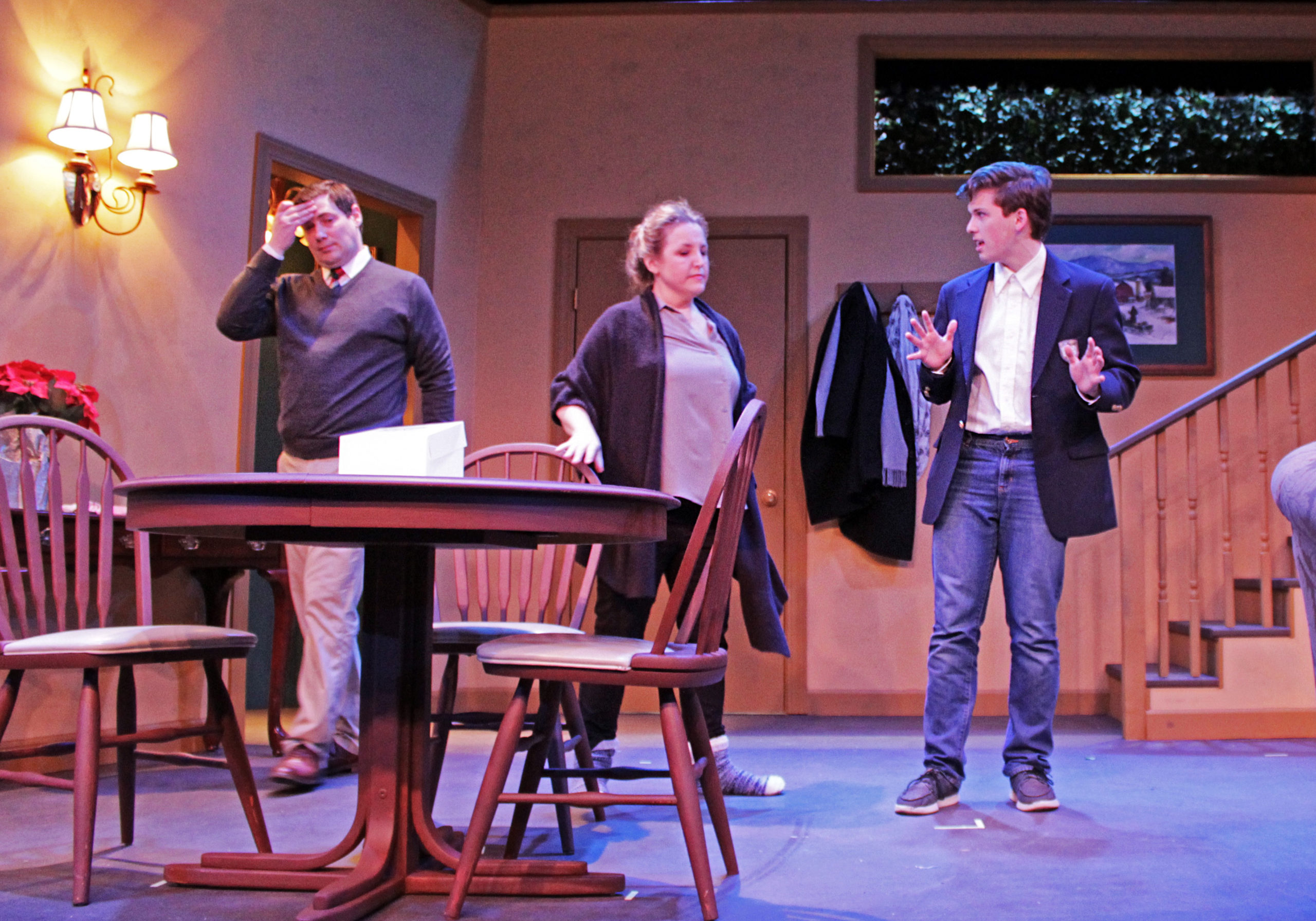 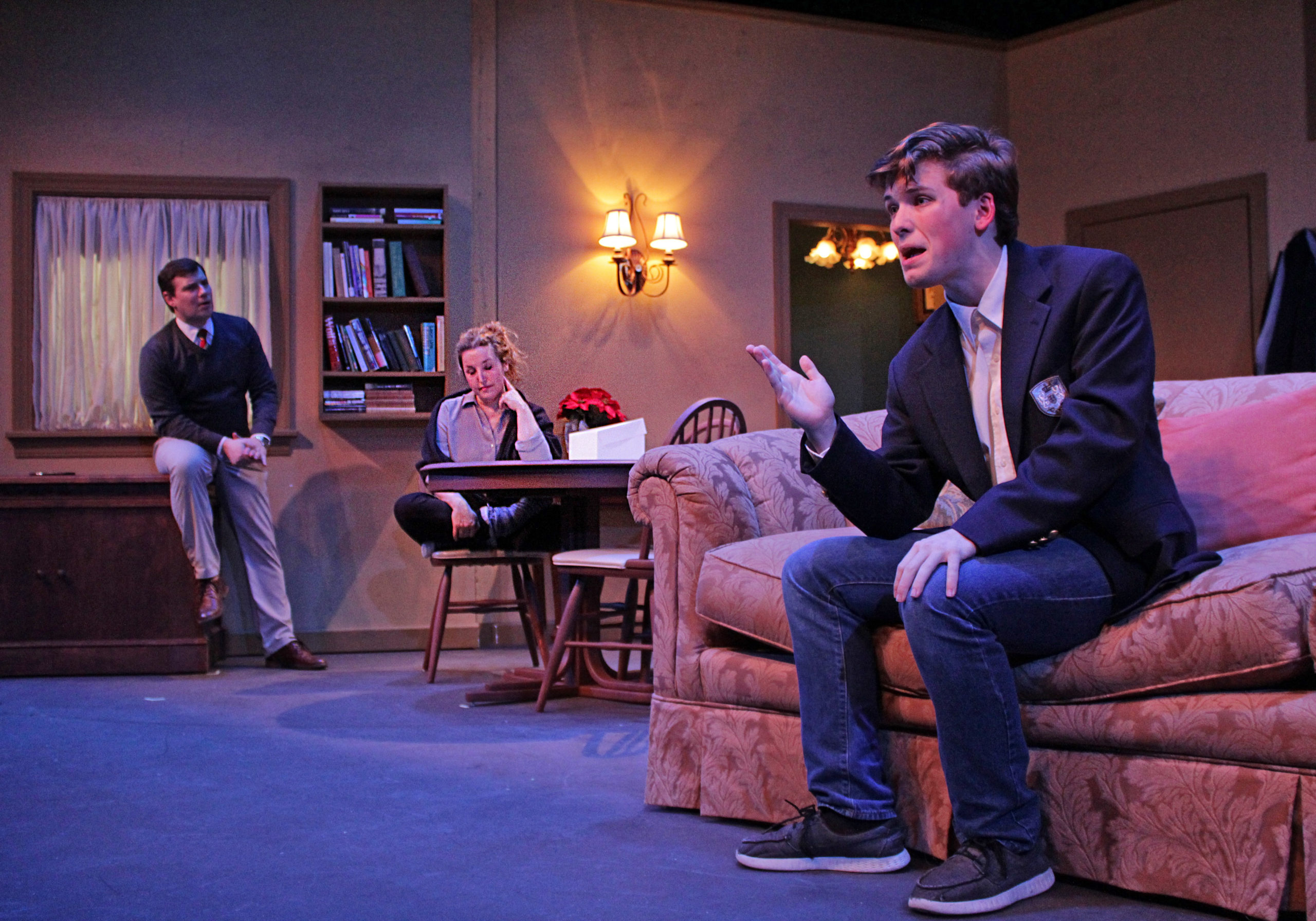 When Operation Varsity Blues brought down dozens of the wealthy elite in early 2019 — following the investigation into a years-long admissions scandal that used bribery, money laundering and document fabrication to unfairly place students at esteemed colleges — Andrew Botsford’s reaction was two-fold.

First, the president of the Hampton Theatre Company (HTC) could imagine himself back in his seat at Lincoln Center in early 2018, watching the satirical dramatics unfold in “Admissions,” a new play from Joshua Harmon that took the ideals and contradictions of liberal white America for a ride through affirmative action, quotas, diversity in admissions, and beyond.

And then, he thought of one particular Hampton Bays High School student, Ian Hubbard, who had appeared in the company’s production of “On Golden Pond” two months before news of the admission scandal broke in 2019, and would soon be in the midst of applying to colleges himself.

Suddenly, “Admissions” had a new timeliness — and a lead actor.

“I thought ‘Admissions’ was a great play and would be great to do it, but I also thought, ‘Well, you’ve got to have a kid who can do this part, because it’s not only a pivotal role, but a demanding role,’” Botsford said, “and it’s definitely for a grown-up, experienced actor. But it’s gotta be a kid.”

The action of “Admissions,” which opens on Thursday at Quogue Community Hall, centers on Charlie, the son of Sherri Rosen-Mason, head of the admissions department at a New England prep school, and her husband, Bill, the school’s headmaster — portrayed by real-life couple Morgan and Tristan Vaughan — who have fought to transform a stuffy, whitewashed institution into a more diverse, contemporary campus.

But when their son sets his sights on an Ivy League university, only to be deferred while his best friend, Perry, who is biracial, is accepted, their progressive values are put to the test — as are those, potentially, of the audience.

“People are looking at this, and laughing, and cheering on what’s being said, until they realize that the people who are being made fun of in this are themselves,” Botsford said. “The thing is, a lot of people in the second-home Hamptons community have the liberal values that say, ‘We need to have more affirmative action and diversity.’ And we also have, in the year-round community, a lot of right-wing people who say, ‘Screw that. If you’re the white kid and you’re good, you go. And if the black kid doesn’t get in, well, that’s just the breaks.’ So a lot of people will be on both sides of this thing.

“It’s going to stimulate a lot of discussion.”

Conversations have sparked up in the rehearsal room, according to Morgan Vaughan, whose own son was applying to colleges when the admissions scandal broke.

“It was just fascinating to me. We love to think that we live in a meritocracy, but do we? And are we really willing to sacrifice our comfort for something we say we believe in, like affirmative action?” she said. “I think this play really hits on the insidious nature of classism — not just racism, but classism — because this is also about people who are getting ahead not necessarily because they deserve to. These are people getting into colleges and prep schools because their parents went there.”

From the perspective of a stressed-out, high school senior on the brink of college acceptance or rejection, Ian Hubbard said he relates to Charlie, and even imagines they could be friends.

“I think that he is a really tragic character because he’s so misguided after he gets rejected. It’s like his entire world melts,” Ian said. “Imagining that he’s had almost everything in his life handed to him, and this is his first big rejection, I think a lot of people would be very upset about that, and I want to make sure the audience doesn’t just write him off after that. He’s a full person and he’s likable. And it’s always fun to be the character that messes everything up and creates the plot.”

But the drama, which won the Drama Desk and Outer Critics Circle Awards for Best Play, has sparked questions within him, too, especially as he prepares to head to Sarah Lawrence College next fall.

“Over time in America, we’ve just been racist throughout it all. And Charlie, eventually, he starts asking questions about what is going on with this system,” Ian said. “And I was wondering, ‘Yeah, this system, it still needs to be worked out, so what’s the end goal? What should we be trying to achieve here?’

“I feel like this generation has certainly been conflating more about how this isn’t right,” he continued. “I would love it if we could translate that into actually making it right. I think we’ve got a better shot at achieving that.”

Hampton Theatre Company will open the second play of its 2019-2020 season, “Admissions,” on Thursday, January 16, at 7 p.m. at Quogue Community Hall, starring Ian Hubbard, Diana Marbury, Minerva Perez, Morgan Vaughan and Tristan Vaughan, with direction by Andrew Botsford. Additional performances will be held on Thursdays and Fridays at 7 p.m., Saturdays at 8 p.m., with a 2:30 p.m. matinee performance on February 1, and Sundays at 2:30 p.m., through February 2. Tickets are $30, $25 for seniors except Saturday nights, $20 for under age 35, and $10 for students. For more information, call 631-653-8955 or visit hamptontheatre.org.

In their earliest incarnation, Damn Tall Buildings didn’t rehearse. They busked. It was Boston, circa ... by Michelle Trauring

So, what are the fears that keep you up at night? Maybe they center on ... 12 Jan 2020 by Annette Hinkle
Sign in to comment