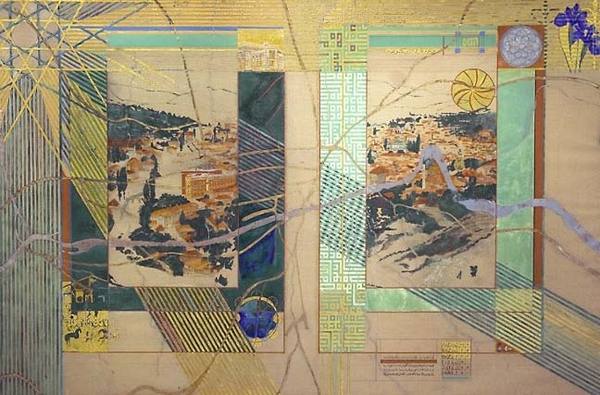 Ellen Frank's "Sarajevo: Here" will be on view at Guild Hall.

Two new exhibitions are opening this weekend at the Museum at Guild Hall in East Hampton: “Cities of Peace,” a suite of monumental gold-illuminated paintings from the Ellen Frank Illumination Arts Foundation, Inc., and works by Elizabeth Sloan Tyler, winner of the 70th Annual Artist Members Exhibition of 2008, Part I.

“Cities of Peace” is dedicated to the transformative power of art to build a world culture of peace and hope.

“We are proud to present this body of work that stimulates thought and discussion about our world,” said Christina Mossaides Strassfield, museum director/chief curator. She noted that “‘Cities of Peace’ will have a ‘Guide by Cell’ free audio tour for all visitors, narrated by actor Fred Melamed (“Sy Ableman” in the Coen Brothers’ film “A Serious Man”) ... the first mobile tour offered by the museum.”

The exhibition features nine 6- by 8-foot gold-illuminated works on linen that are a visual tribute to people and locations around the world. “Cities of Peace” is a commemorative body of work conceived by New York artist Ellen Frank and produced at her Illumination Atelier, with trained interns and scholars from China, Colombia, Estonia, Canada and elsewhere.

“Through understanding the history and beauty of these great cities that have suffered strife, we can participate in the beauty of recovery and peace,” Ms. Frank said. Emphasizing understanding as a prerequisite to peace, “Cities of Peace” includes Baghdad, Beijing, Hiroshima, Jerusalem, Kabul, Lhasa, Monrovia, New York and Sarajevo.

A visit to Jerusalem in 1999 by Ms. Frank inspired her to produce the first painting in the series, with a goal of celebrating the best of the human spirit.

Jan Oberg, executive director of the Transnational Foundation for Peace in Sweden, has praised the exhibit in this way: “‘Cities of Peace’ superbly promotes ethics, dialogue and inner calm—so overlooked in our world as tools, as language, for peace and peaceful co-existence. ‘Cities of Peace’ should not only be exhibited in New York or Geneva, but in war zones, in schools and art halls where they would give hope and inspiration.”

Crimson leaf, the color of blood, is placed in each painting to honor the fallen. While serving as memorials, the paintings are also intended as border crossings that enable visions of greater compassion and heightened consciousness among peoples.

The works were produced with participation by international interns at the Illumination Atelier of the Ellen Frank Illumination Arts Foundation in East Hampton. The purpose of the not-for-profit organization is to enhance understanding of the art and history of illumination among artists and the public and to enable the creation of new work in this historic genre to build a culture of peace.

Ms. Frank studied art history and connoisseurship at Yale University and holds an interdisciplinary doctorate in English literature and the visual arts from Stanford University. She is a recipient of a Fulbright Fellowship, a Ford Foundation fellowship, and grants from the National Endowment for the Arts, the Pollock-Krasner Foundation, the New York State Council on the Arts, and the New York Foundation for the Arts. She founded the nonprofit Ellen Frank Illumination Arts Foundation in 2005.

Elizabeth Sloan Tyler was the winner of the 70th Annual Artist Members Exhibition of 2008, Part I. The awards juror was Linda Yablonsky, art critic for Bloomberg News.

“Landscape has always been my main inspiration,” Ms. Tyler said recently. “Being awarded top honors for Part I of the Guild Hall Members Show was an astonishing surprise and delight. It is a privilege to have a one-person exhibition at such a prestigious institution.”

Ms. Tyler was introduced to abstract expressionism while studying with Howard Trafton in New York City. His philosophy echoed that of Hans Hoffman while at the same time incorporating the techniques and styles of African, Italian, and Greek masters.

Early on, she worked primarily in acrylic and collage, and then switched to oil, soaking the canvas with medium and painting into it while wet, which necessitated completing the painting in one session. She used various tools, including paper towels, tissues, and whatever else was at hand, and found this to be both fun and liberating.

In the ’80s she moved to Long Island full-time and, inspired by the wide open space and light of the East End, began to work exclusively in oil, textured with various natural materials such as sand and seaweed. She sought to interpret the luminosity through translucent layering of color and the fusing of shapes. Today, she continues to strive to evoke the atmospheric and spiritual, rather than realistic, character of landscape.

The opening reception for the two exhibitions is scheduled at the museum at 158 Main Street in East Hampton on Saturday, October 23, from 6 to 7 p.m. for Guild Hall members and representatives of the press; open to all from 7 to 8 p.m. The opening reception is free, with $7 suggested museum admission.

On Saturday, November 20, at 3 p.m. there will be a gallery talk with Christina Mossaides Strassfield, museum director and chief curator; Elizabeth Sloan Tyler, winner of the 70th Annual Guild Hall Artist Members Exhibition of 2008, Part I; and awards juror Linda Yablonsky, art critic for Bloomberg News.