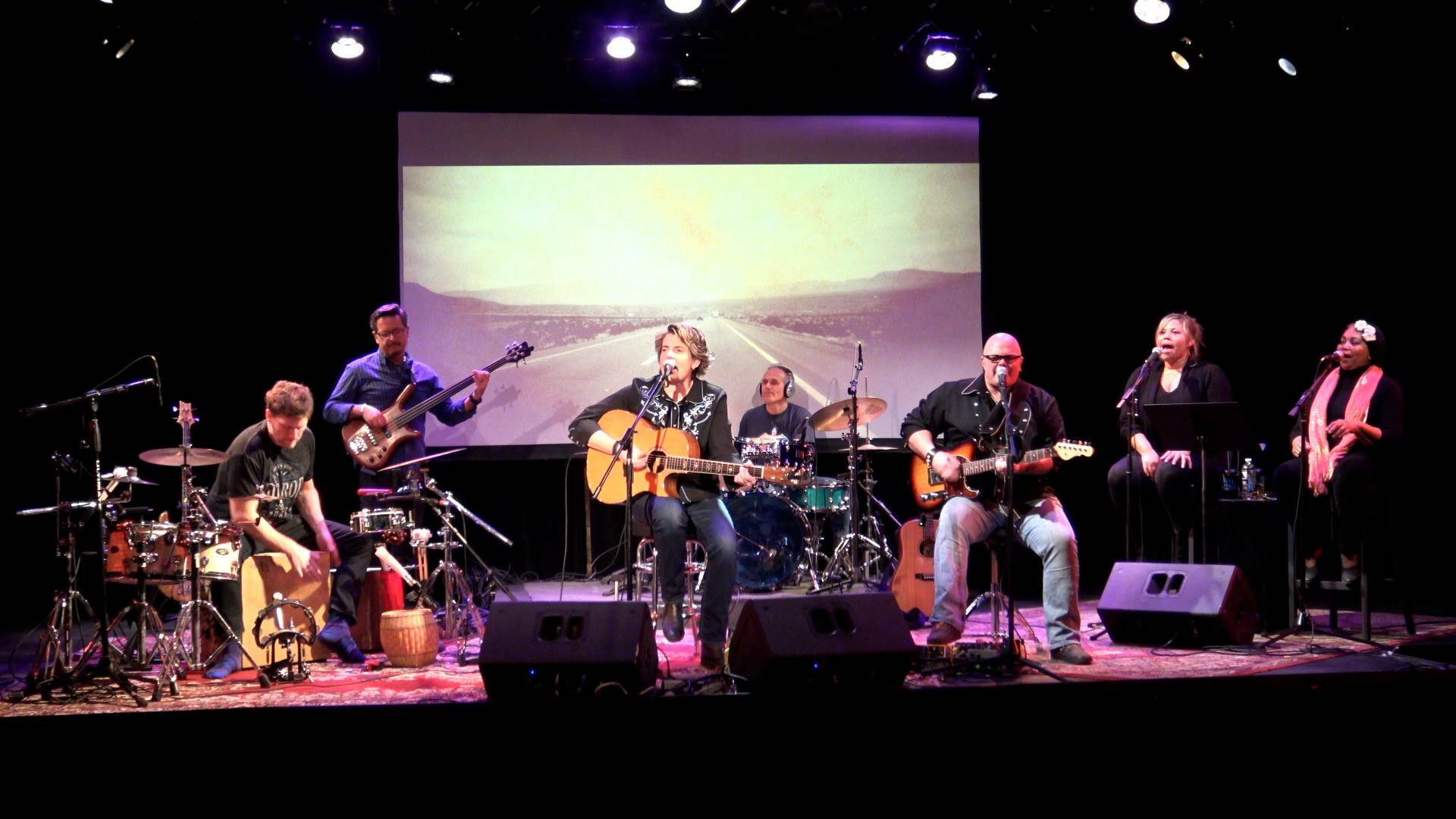 Inda Eaton and her band performing "Shelter in Place" at Bay Street Theater in 2020.

Just over a year ago, on March 7, 2020, Inda Eaton and her band took the stage at Bay Street Theater in Sag Harbor, and in front of a sold-out crowd, performed a concert featuring tracks from her newest album “Shelter In Place.”

In addition to local talent like Mamalee Lawler, Rose Kerin and Nancy Atlas, she was joined by band members who had flown in from as far away as Arizona and Wisconsin, and at the time, Eaton thought the concert would be just the first run-through of many performances of “Shelter in Place,” which she envisioned taking on the road.

Instead, that evening turned out to be the prescient end-of-the-line, in so many ways. Throughout the concert, Eaton’s banter with the audience about the approaching pandemic, the potential medical benefits of the alcohol in Bay Street’s well-stocked bar and a Wet Wipe courteously handed to her by someone from the shadows was received with good-natured, light-hearted laughter.

But on that March evening, no one could possibly grasp just how quickly prophetic those jokes would turn out to be — just like the name of Eaton’s album itself, “Shelter In Place,” which was recorded in 2018. Within a week, the reality of COVID-19’s spread gripped the nation and by mid-March, the world came to a literal and screeching halt.

And that concert? It was the last live event held at Bay Street Theater in 2020, which, due to the pandemic, remains closed to this day.

To mark the one-year anniversary of the performance, on March 13, Eaton released an online concert film version of the Bay Street show. “Inda Eaton: Shelter In Place” is available now on the theater’s website through the end of April with tickets sold by donation, proceeds of which will be shared with the artists.

“I had no idea the literal meaning of shelter in place would come so into play, yet I’m not surprised,” said Eaton when asked to reflect on the past year and her album with its eerily prophetic name. “What I learned in the pause is that what we think in our head is so limited and our hearts and emotions are so far ahead and it doesn’t surprise me.”

Even in the years prior to the pandemic and the recording of “Shelter in Place,” Eaton, who lives in Springs but grew up in Wyoming, Arizona and California, had a sense of increasing unease and foreboding throughout this country due to the political ascendancy of Donald Trump.

“When I put together the pieces of where these thoughts began, it was after the election in 2016. It was a beginning point, but I knew the acrimony and uncomfortability back then would not age well,” she said. “It doesn’t surprise me — the title of the album and the last show plays emotionally into the times.”

These days, though Eaton admits she feels a glimmer of hope with a new administration in the White House, the spring sun returning and vaccine relief on its way, she remains cautious in her optimism.

“We’re still walking on eggshells — and we need to.”

Eaton has good reason to tread carefully with her emotions, as the phrase “shelter in place” and the need to do just that has turned out to be far more relevant than she initially imagined, evoking not only the political and the social climate, but the personal as well.

“In 2018, I put the tracks down for the album. It was probably the most rickety rollout ever, with one catastrophe after another,” she recalled.

“There’s life before and life after you lose a parent. It’s been so challenging,” Eaton admitted. “I got over the early wave of shock that the pause has brought up. I think I’m finally starting to feel free.”

She adds that if there’s any upside to the situation, it’s that both her grandmother and her mother died before COVID-19 came on the scene and forced so many people to pass on in isolation, without the comfort of family or friends.

“If you were going to lose a loved one, you wanted them to get off this planet before this. The grief and loss, I can’t imagine. It’s bad enough to lose a dog in this,” said Eaton who did, indeed, lose her pet last May.

In many ways, the March 2020 concert was to be Eaton’s re-entry into the world of music in the wake of her grandmother’s and mother’s deaths. Bringing the band back together, incorporating footage into the concert that had been shot locally and out west by cinematographer Mike Lavin and Annmarie McCoy during the band’s previous tour through Wyoming, and connecting with local fellow musicians was a way of emerging from the fog of grief and forging ahead.

“We had pulled ourselves together and were so fired up that we were able to gather the group since the early days and gather imagery and put our version of the record out there,” she said of the concert. “We were euphoric. I felt we had finally grown into what the project meant. The whole background to that evening was we were going to release this mini-movie and we built the whole show around it.

“I thought I had unpacked the concept of freedom and the meaning behind shelter in place,” she added. “We were giddy. We hadn’t been able to spend much time together because we had all these losses and road blocks.”

But still, during the show they all sensed the presence of storm clouds gathering quickly on the horizon.

“All of us had a tangential awareness of the pandemic. We called it ‘the sickness,’ only because our bass player has a gig at a hospital and he had been in CDC meetings and gave it to me straight,” Eaton recalled. “He said, ‘We may not have people at the show.’ And Nancy [Atlas] had just flown home from a gig and had worn gloves on the trip. She said, ‘This is serious, it’s for real. You’re sold out, but I don’t think anyone’s coming.’”

But the Bay Street audience did show up and the band played on. Eaton notes they almost didn’t bother recording the show, figuring it was a “first draft,” so to speak and would be perfected by many performances to follow.

“We figured it was a one-off and that we’d record it next time,” she said. “We were using the show to work out how to put the band together.”

Fortunately, the concert was recorded with four cameras and the resulting footage has now become something of a time capsule, representing the last days of freedom before the pandemic. Within a couple weeks came the health recommendations to avoid contact with others and stay at home.

“Nobody heard the tracks. It was over and we were fighting for our lives,” recalled Eaton. “The band members flew back to Arizona and Wisconsin. The energy was, it had been an awesome show, then, ‘I have to get out of here,’ like a snowstorm is coming.”

Ironically, the film footage which plays as the backdrop accompaniment to the concert is designed to evoke the energy of the album and is all about the concept of freedom, which the whole world lost within a week of the show.

“What a wallop to unpack what that has meant. I’ve grown into the topic. The pandemic, civil rights, it’s been a rough year. I don’t think anyone even wants to talk about shelter in place anymore,” Eaton said. “We felt we had put together a piece that talked about coming together as Americans making that East meets West vibe. It’s a very American piece. Then the world took a tumble and I think the thing I learned is freedom only exists through equality.

“I think it’s positive we’ve had change at the top level, but I don’t think the enmity has gone away,” she said. “I’m an eternal optimist, but I think we’re just as angry as we were on January 6.”

But now, at least, there is hope on the horizon on another front — live music. In early April, arts and entertainment venues in New York State will be permitted to reopen at 33 percent capacity, with an indoor limit of 100 audience members (200 for outdoor venues), with masks and social distancing in place.

Though Eaton is not yet sure how these new rules will affect her ability to play live or exactly when she and the band will be able to get together again, she is excited the momentum is at least moving in the right direction.

“Talking about the music, we’re musicians and are made to go out and have this conversation. I shudder, it’s been unbearable that we can’t go out and diffuse tensions and let some energy out,” she said. “We are looking forward to playing live. I feel like those people who walked out of Chernobyl and go back to find meals uneaten and beds unmade. That’s what it felt like. The last meal is still on the table. You can do a Marie Kondo and toss it all in the dumpster or look and say where were we? I think the music is so current and prescient it’s worth looking at it.

“It seemed the right time to put this show out — the humor and referring to what’s going on but not quite clear on what’s going on,” she said. “It won’t feel like it does now in the future, so I thought, get it out of hard drive, have it live and develop the next thing. For me it was important to go back to that last show, take a look see where we were and let’s honor that, make space for that and move on.

And no matter what the future brings, there’s no denying that this past year has changed everyone, and the way in which we all function in our daily lives — both personally and professionally.

As far as Eaton is concerned, she understands that she will go forward, though she concedes the route she will take from here on out may not be the same one she originally expected to find herself on.

“Different work, different energy — that’s what I’m excited about,” she said. “The music is healing and doesn’t have an expiration date, but I’m ready to go forward.”

“Inda Eaton: Shelter in Place” was filmed at Bay Street Theater by Authentic Productions and features Eaton, B. Rehm-Gerdes, Mike Guglielmo, Jeff Marshal, Jeffrey Smith, Mamalee Lawler and Rose Kerin, with a special appearance by Nancy Atlas. The concert is available on demand by donation through April 30 at baystreet.org.