Inside The World Of Booksellers - 27 East 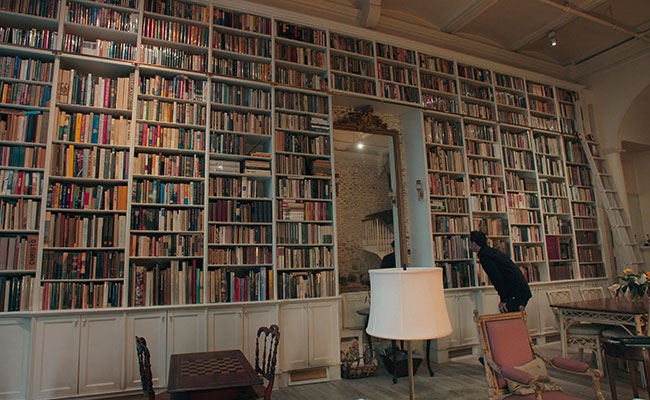 A scene from the film "The Booksellers."

Antiquarian booksellers are part scholar, part detective and part businessperson, and their personalities and knowledge are as broad as the material they handle. They also play an underappreciated yet essential role in preserving history.

The 2019 film “The Booksellers” takes viewers inside their small but fascinating world, populated by an assortment of obsessives, intellects, eccentrics and dreamers. The film will be screened on Saturday, February 22, at 6 p.m. at Guild Hall in East Hampton as part of HamptonsFilm’s series “Now Showing.”

Directed by D.W. Young and executive produced by Parker Posey, the film features interviews with some of the most important dealers in the business, as well as prominent collectors, auctioneers, and writers such as Fran Lebowitz, Susan Orlean, Kevin Young and Gay Talese.

‘A Christmas Carol’ Dinner Theater On The North Fork

Vanessa Leuck, Ethan Popp and Broadway on the North Fork will produce a one-man adaptation of Charles Dickens’s “A Christmas Carol” to play an immersive, socially distant run at Greenport’s First and South Restaurant & Bar this holiday season. In a three-hour experience, an audience of 20 patrons will enjoy an elegant feast while witnessing this epic tale in an all-new telling. The production runs December 9 through 20 with dinner performances on Wednesdays, Thursdays, Fridays and Sundays at 5:30 p.m. Brunch performances are offered on Fridays and Sundays at 11:30 a.m. Starring as the show’s storyteller is New England ... by Staff Writer

Bay Street Theater will present the 2018 Geffen Playhouse production of “A Christmas Carol” on ... by Staff Writer

On Saturday, December 5, at 4 p.m., St. Luke’s Episcopal Church in East Hampton will ... by Staff Writer

On Friday, November 27, at 5 p.m., artist and activist Jackie Black will discuss “Last ... by Staff Writer

Visionaries 2020 is a series of intimate gatherings hosted by East Hampton’s Guild Hall that ... by Staff Writer

The photography of Hampton Bays resident Matthew Raynor will be on view in an exhibition ... by Staff Writer

A Talk About ‘Montauk Time’ With Novelist Peter Bove December 1

Winter is creeping up on us, and though concert venues are still closed to in-person programming, that doesn’t mean the Bridgehampton Chamber Music Festival is throwing in the towel and going into hibernation. Instead, BCMF created “Autumn Series at Home,” a three-concert season. The last of the three online programs, “Fall Winds,” is coming up on Saturday, December 5, at 5 p.m., and offers a blustery program of music featuring Mozart’s sparkling “Oboe Quartet, K. 370,” Elizabeth Brown’s beguiling “Liguria for Flute, Clarinet, Violin, Cello and Piano,” and Louise Farrenc’s sumptuously romantic “Sextet for Winds and Piano.” Artists for the ... by Staff Writer