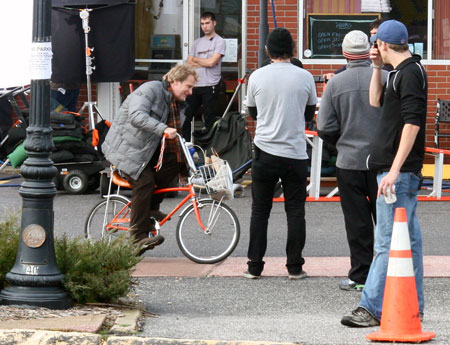 It is common practice for filmmakers to use Toronto to stand in for New York City. During his heyday, the great John Ford used Monument Valley as a substitute for many of his settings in a dozen western states. Prague is routinely used to represent on screen a dozen or so older cities in Europe. And when the makers of “Paper Man” wanted to set their film in Montauk, they used ... Montauk. What will Hollywood think of next?

Actually, “Paper Man” is not a Hollywood production but an independent film with two well-known leads, Jeff Daniels and Lisa Kudrow, and two who are on their way to being there: Emma Stone, who was featured in last year’s hit comedy “Superbad” and was seen earlier this year in “The Rocker” and “The House Bunny,” and Ryan Reynolds, of “Van Wilder” and “Blade: Trinity.”

Shooting had begun in Montauk on Veterans Day, and during the next several days some well-known (to locals) spots were used, including Camp Hero, Puff and Putt, Ronjo Motel, Ditch Plains, John’s Drive-In, White’s Drug Store, and The Dock restaurant. George Watson, owner of the Dock, observed the filming with a wry smile.

“There was a lot of hurry up and wait,” he reported. “Things went slower than I thought they would. One time a prop guy was on a 6-foot ladder behind my bar making some adjustments to the bottles. Then they called for an electrician. The first guy got off the ladder and carried it away. The electrician takes his own 6-foot ladder and puts it behind the bar. Union rules, I guess.”

That is the pace of filmmaking, pointed out Sirad Balducci, a production manager on the movie. “Especially filming on location where you have less control of your surroundings and the weather,” she said. “It’s not unusual to begin the day at 8 a.m. and not quit until 10 p.m. The budget allows for only so much time to shoot. And in this case, the directors really wanted Montauk to be Montauk.”

The lensing of the movie last week was a homecoming of sorts for Ms. Balducci. Her parents both taught at the University of Michigan and when Ms. Balducci was 8 her parents spent a summer in Montauk. They returned every summer and eventually purchased a house in the Hither Hills area.

She continues to visit as often as she can with her own daughter. Her mother, Carolyn, is in charge of special programs at the Montauk Library.

“Montauk has always been a source of extremely creative energy for me and I find a lot of inspiration here,” she said.

Several years ago, Ms. Balducci co-founded Triboro Pictures, which raises money to fund the making of small-budget movies and that allows it to work with filmmakers looking for opportunities outside the Hollywood studio system. Good scripts, she said, attract actors who are looking for material that is not necessarily mainstream and doesn’t have to be made in Los Angeles.

Mr. Daniels, who lives in Michigan with his wife and three children, is another actor with an eye for roles outside the mainstream. Montauk might have felt familiar for Mr. Daniels, who also grew up in Michigan: it was cold and windy throughout the week. And the Montauk Playhouse was nearby.

Mr. Daniels counts among his credits such movies as “Ragtime” (his film debut in 1981), “Terms of Endearment,” “The Purple Rose of Cairo,” “Arachnophobia,” “Good Night and Good Luck,” and “Dumb and Dumber.” These days, the actor, who appeared on the New York stage in a tour de force performance in “Blackbird,” spends much of his working life as the executive  director of the Purple Rose Theatre Company, which he founded in Michigan in 1991.

As he did in “The Squid and the Whale,” Mr. Daniels plays a writer whose career is on the skids in “Paper Man.” He tries to escape his troubles by moving to Montauk, where he also hopes to reconnect with his muse, an imaginary superhero played by Reynolds, who has been inside his head since childhood. In Montauk, he also connects with a local teenager, the Emma Stone character, and that relationship has him asking a lot of questions about the choices he has made in his life.

Because this is an independent film, the emphasis is on mood and character development. Ms. Kudrow plays the estranged wife of the Daniels character. Most people know her from the long-running TV series “Friends,” and might not remember that she appeared in  two of the highest-grossing comedies ever, as Billy Crystal’s rattled girlfriend/wife in “Analyze This” and “Analyze That.”

A la the Coen brothers’ films and the just-released “Slumdog Millionaire,” “Paper Man” has two directors, Kieran (brother of Dermot) and Michele Mulroney. The original script by the husband-and-wife team was developed at the Sundance Institute, founded by Robert Redford. Though the Mulroneys have another project in the production pipeline, this is their debut as directors.

Because of that other project, “Paper Man” might be the last independent film the Mulroneys undertake in a while. They are penning the script for “Justice League,” about the DC Comics heroes. The couple had earned some writing cred in Hollywood for doing the final rewrite of the script for “Mr. & Mrs. Smith,” the action thriller that united Brad Pitt and Angelina Jolie.

Mr. Mulroney—who might be remembered as Timmy, the character who rebuked George Costanza for double dipping a tortilla chip on “Seinfeld”—said that he and Mr. Daniels have been friends since both were cast as Union soldiers in 1993’s “Gettysburg.”

The South Fork phase of the shooting of “Paper Man” concluded on November 19 at the Wainscott Studios. Again, it was not the most active set, with most of the crew eating while the next shots were set up. The next day the trailers were packed up and the actors and crew headed for the Palisades in New Jersey, where interiors will be shot inside a house that is supposed to be in Montauk.

What is the expected distribution route for “The Paper Man”? It would seem that the producers have some decisions to make. It is unlikely that all the post-production work can be completed in time for a showing at the Sundance Film Festival in Utah in January, as a kind of bookend at the place where it was developed, but holding it for Sundance 2010 would mean that more than a year would pass without a theatrical release date.

According to Michelle Isabelle-Stark, the director of the Suffolk County Film Commission, Montauk could be used again as a film location soon in a “rising tide lifts all boats” scenario. Responding to an increase in films being shot in Connecticut, earlier this year the New York State Legislature passed a bill giving movie production companies a significant tax break if they film in the state, and Long Island—especially the East End—has long been a particularly popular shooting site.

In recent years directors have yelled “Action!” on the sets of “Margot At the Wedding,” “Funny Games,” “Pollock,” “Diggers,” and “Something’s Gotta Give.”

Ms. Balducci acknowledged that had it been summer, the crew of “Paper Man” could not have shot on location here. “Many people might not see themselves in Montauk in November,” she said. “But for filmmakers, that is turning out to be the best time of year.”