Kids Take On The Government In Groundbreaking Climate Change Case 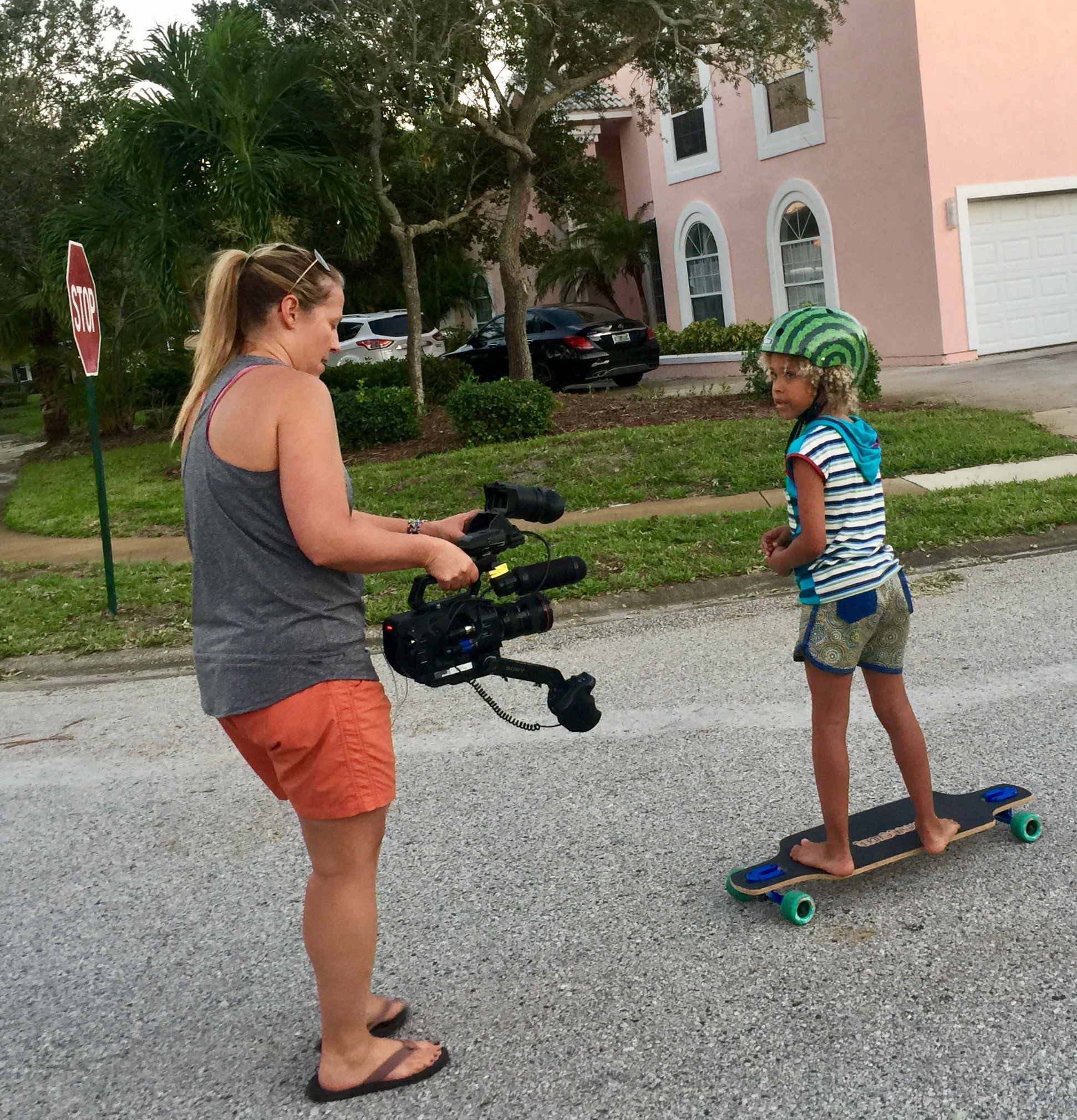 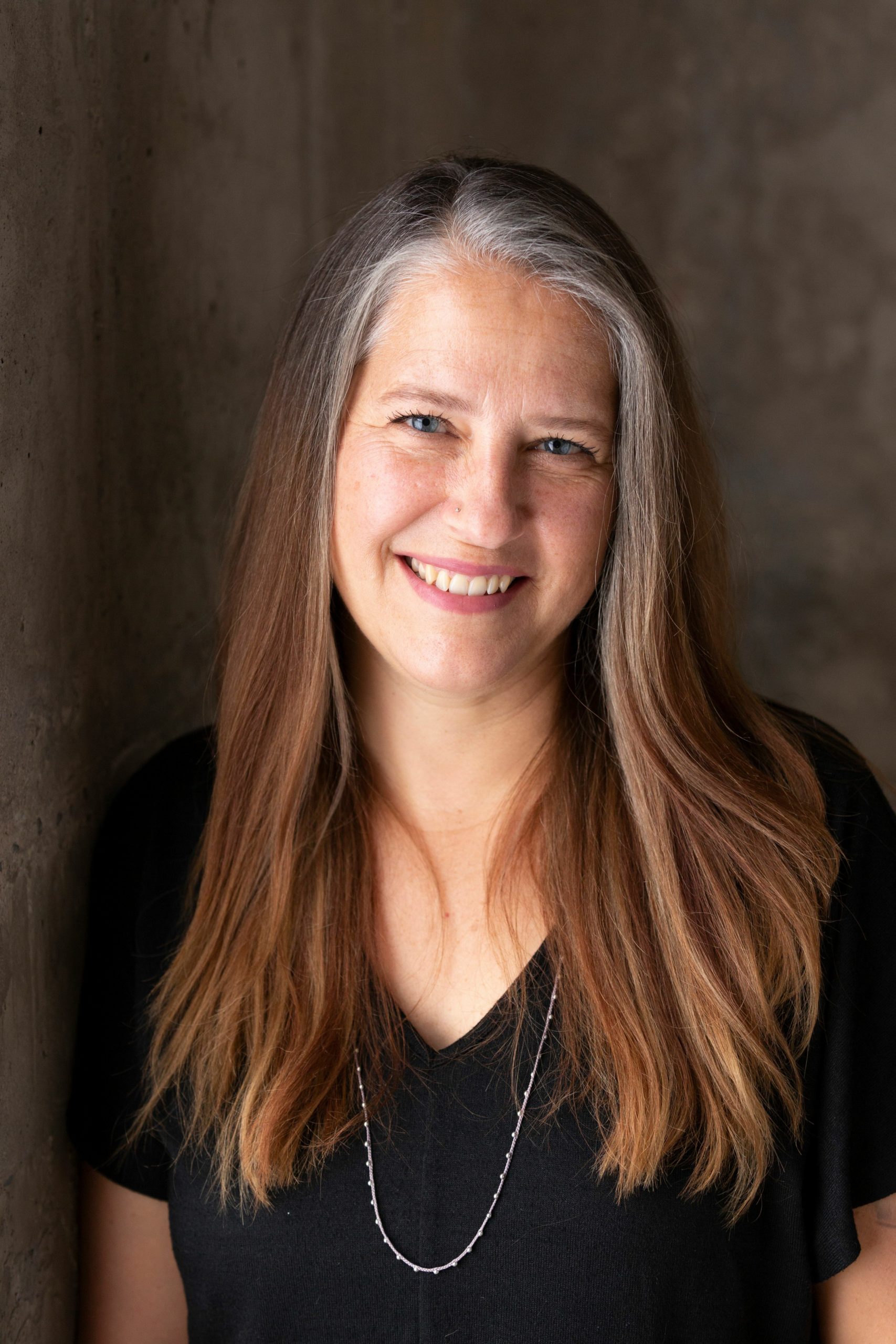 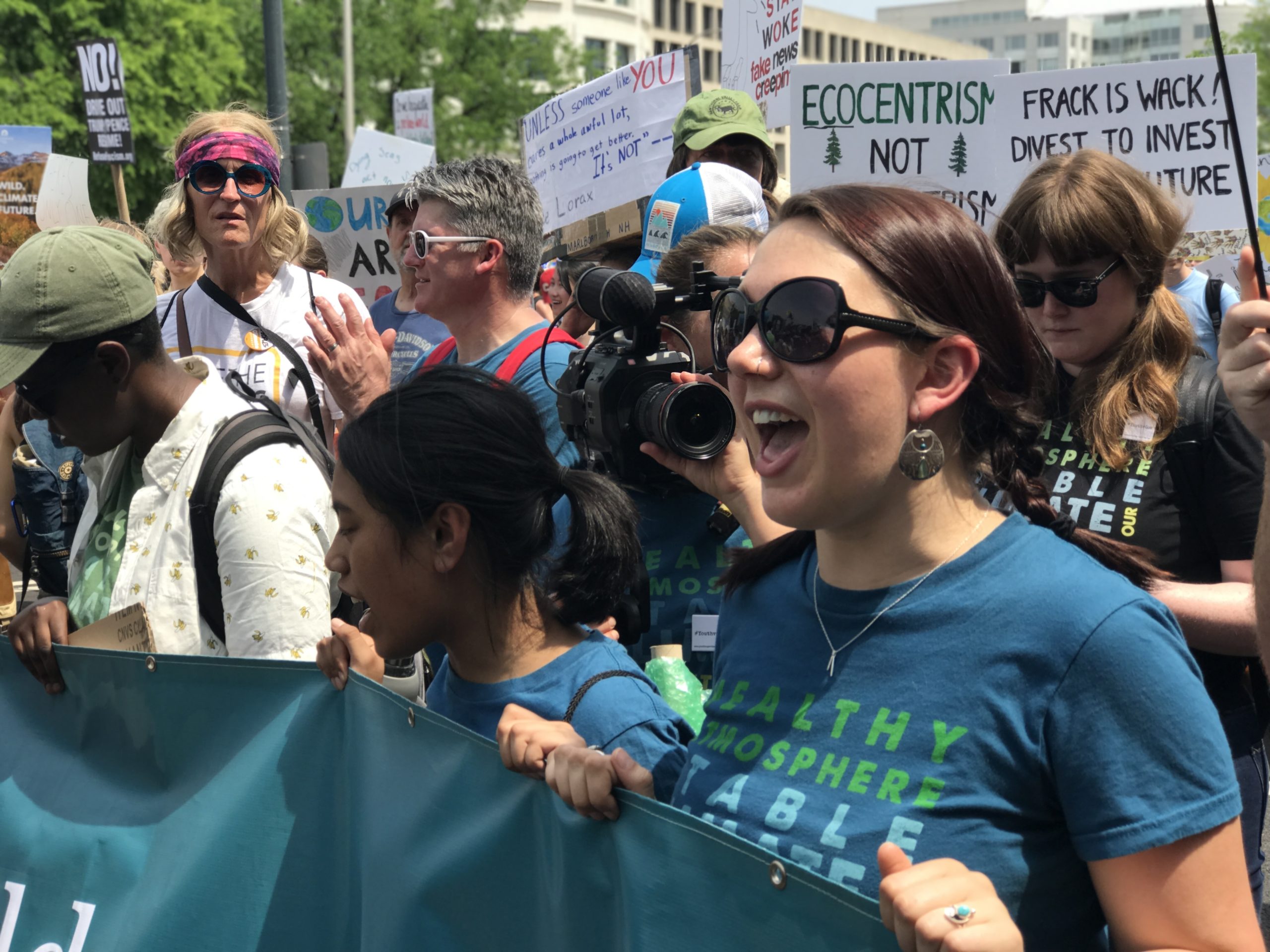 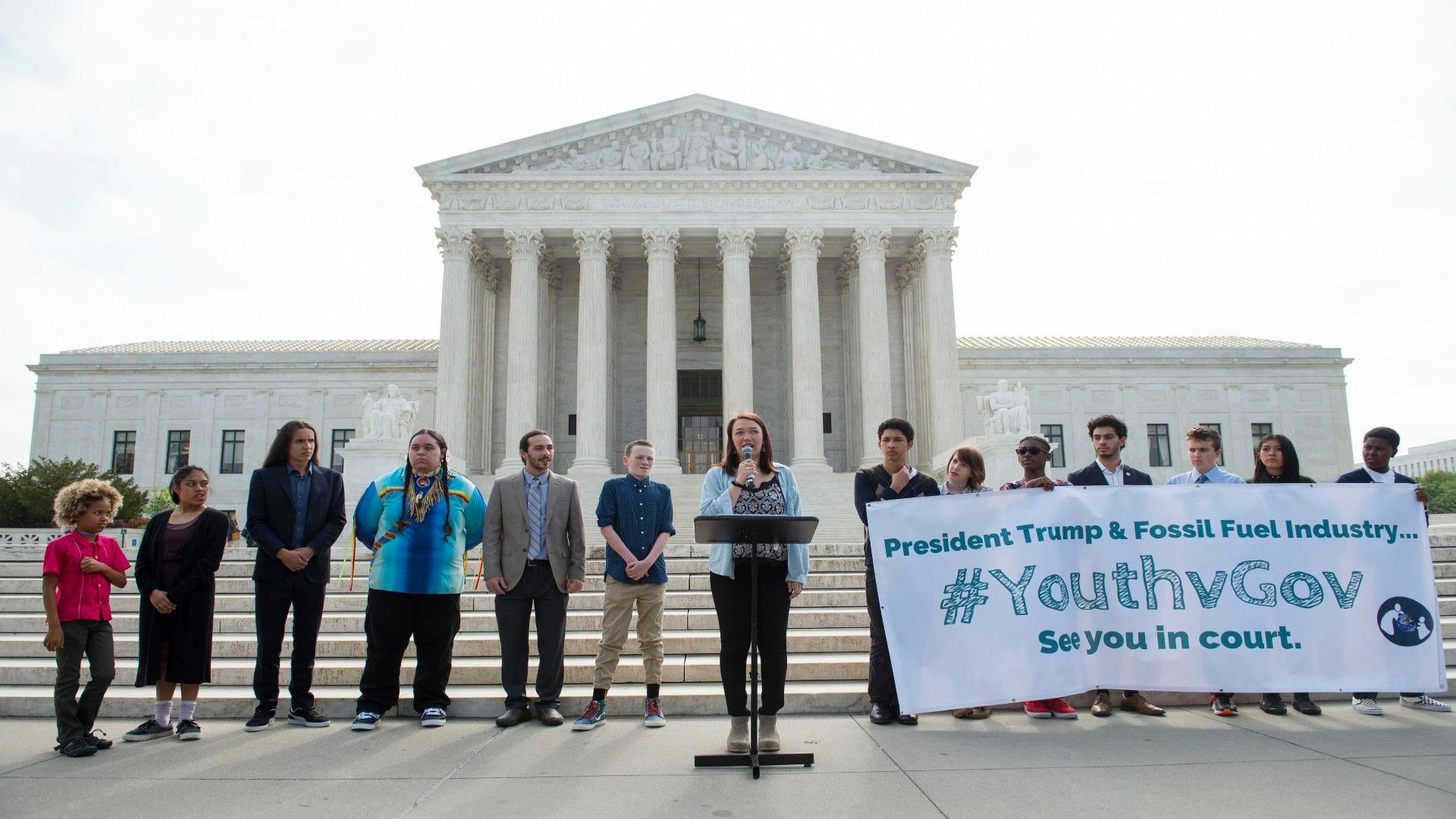 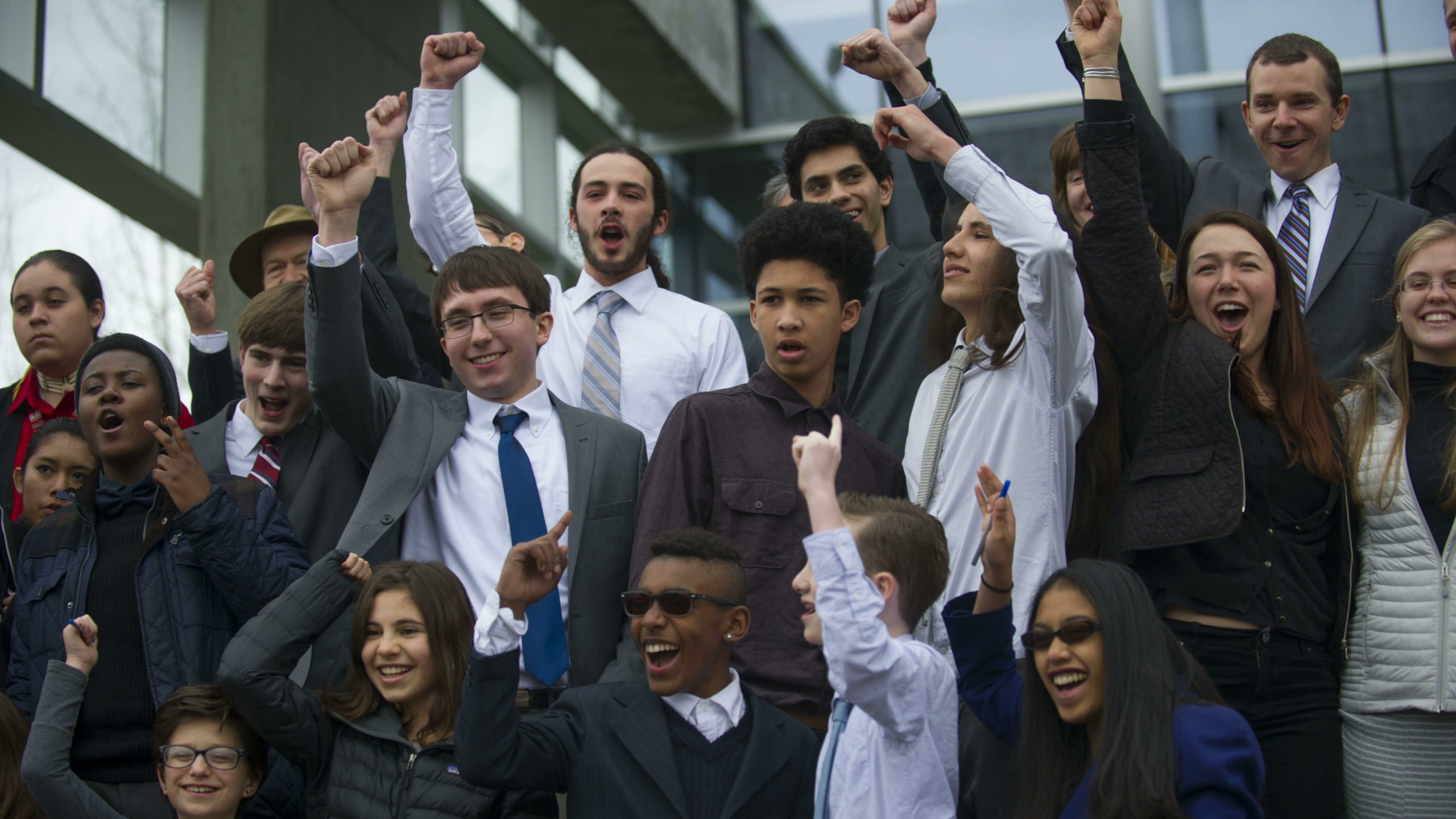 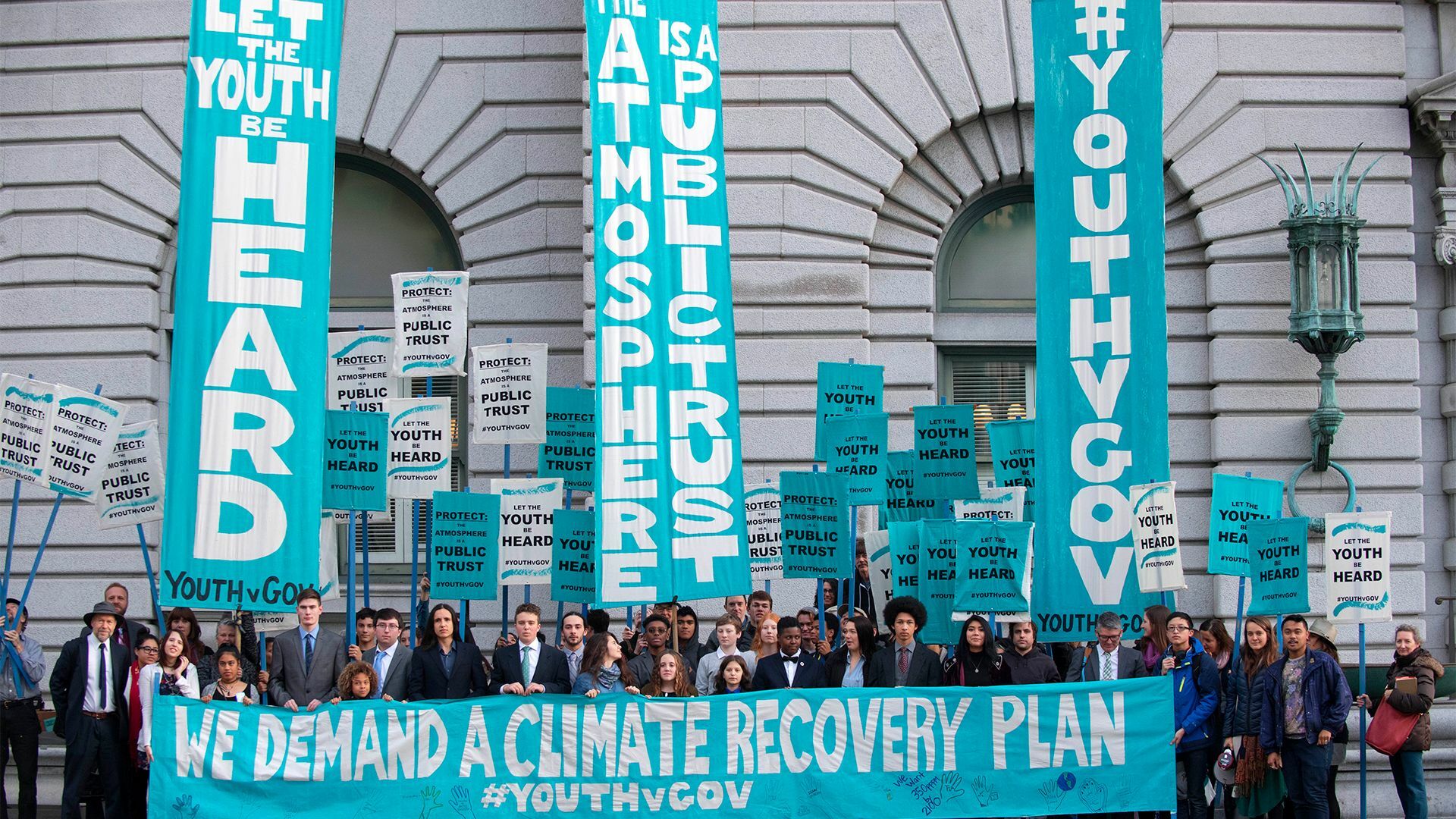 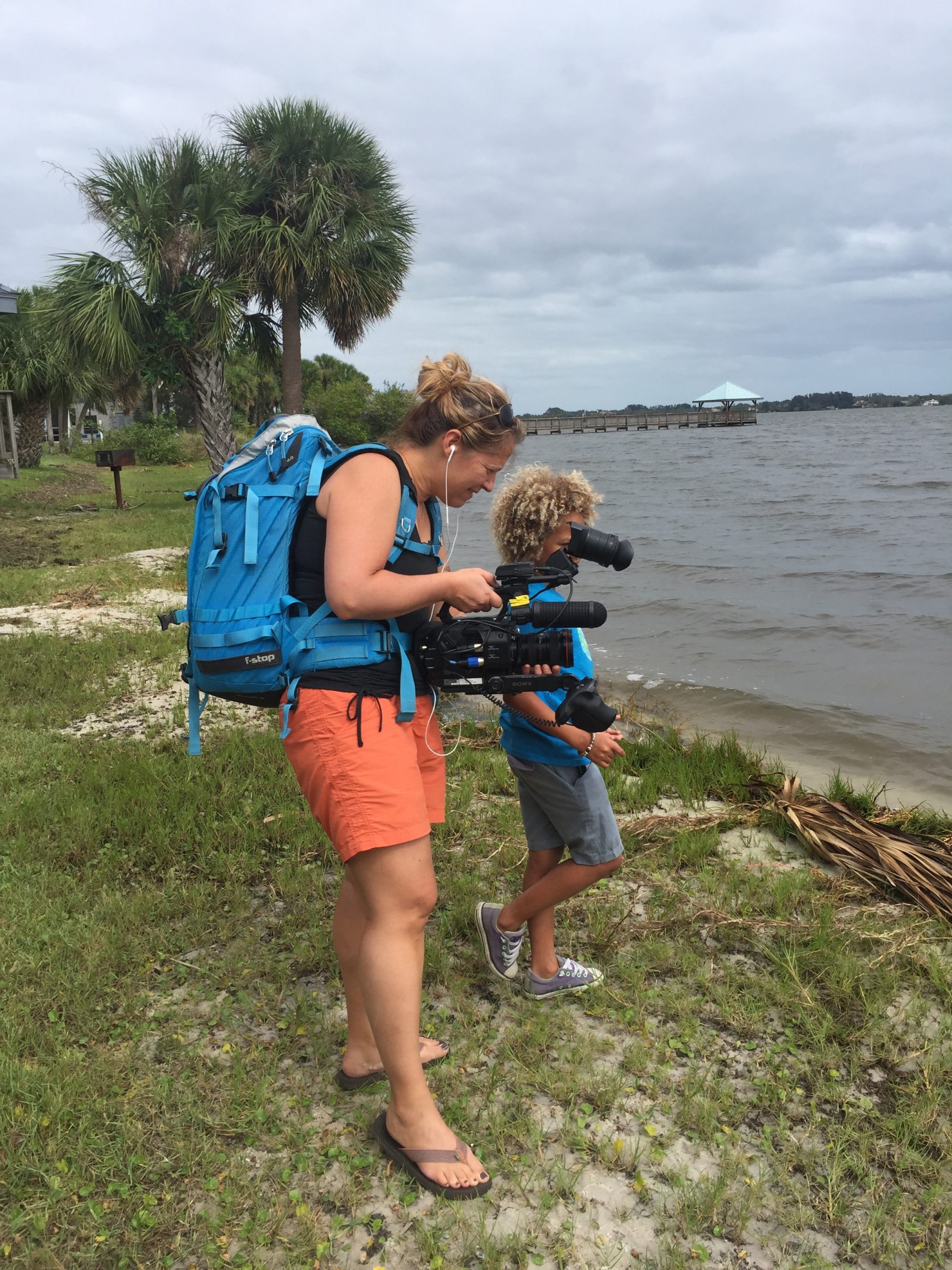 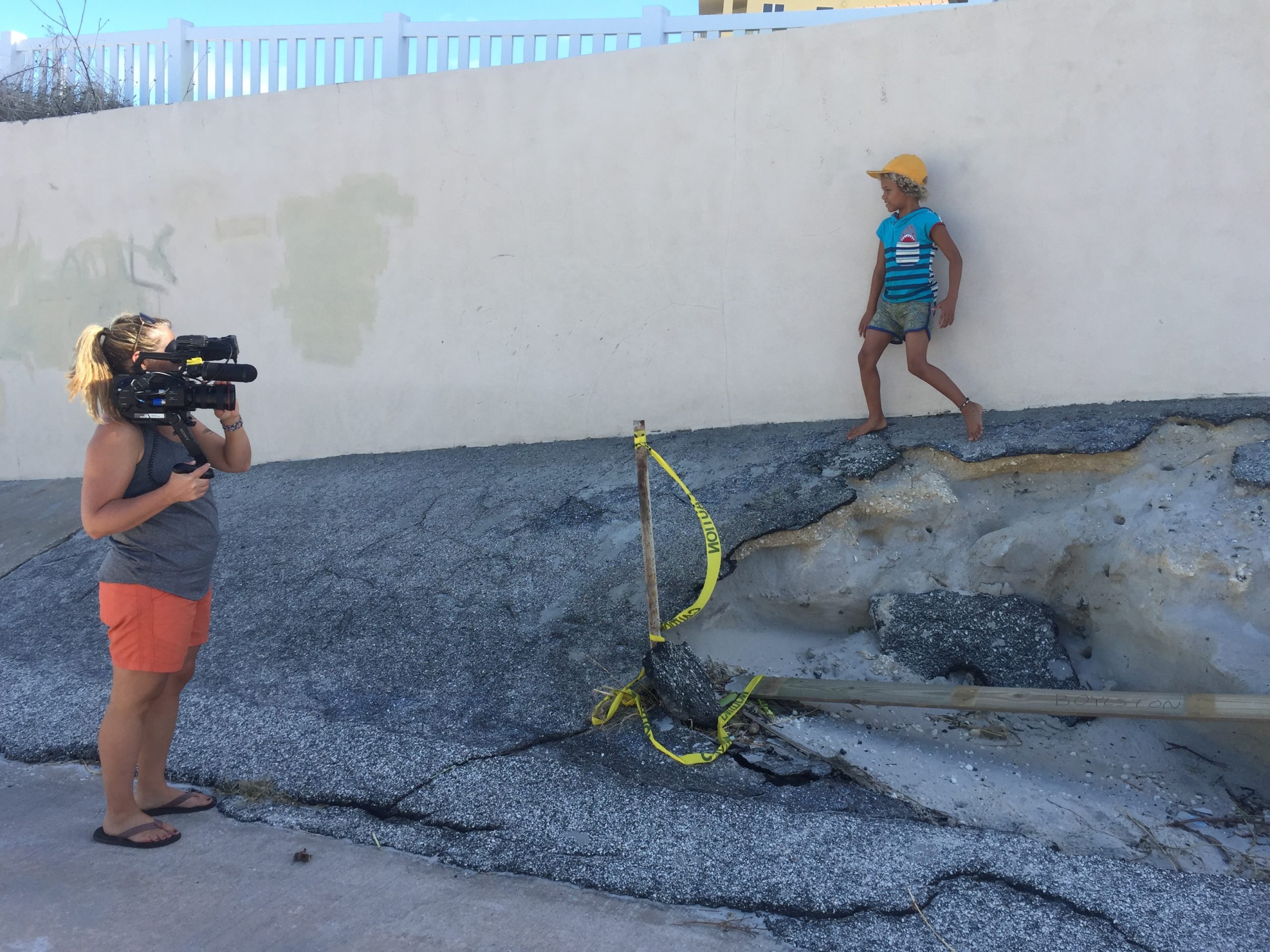 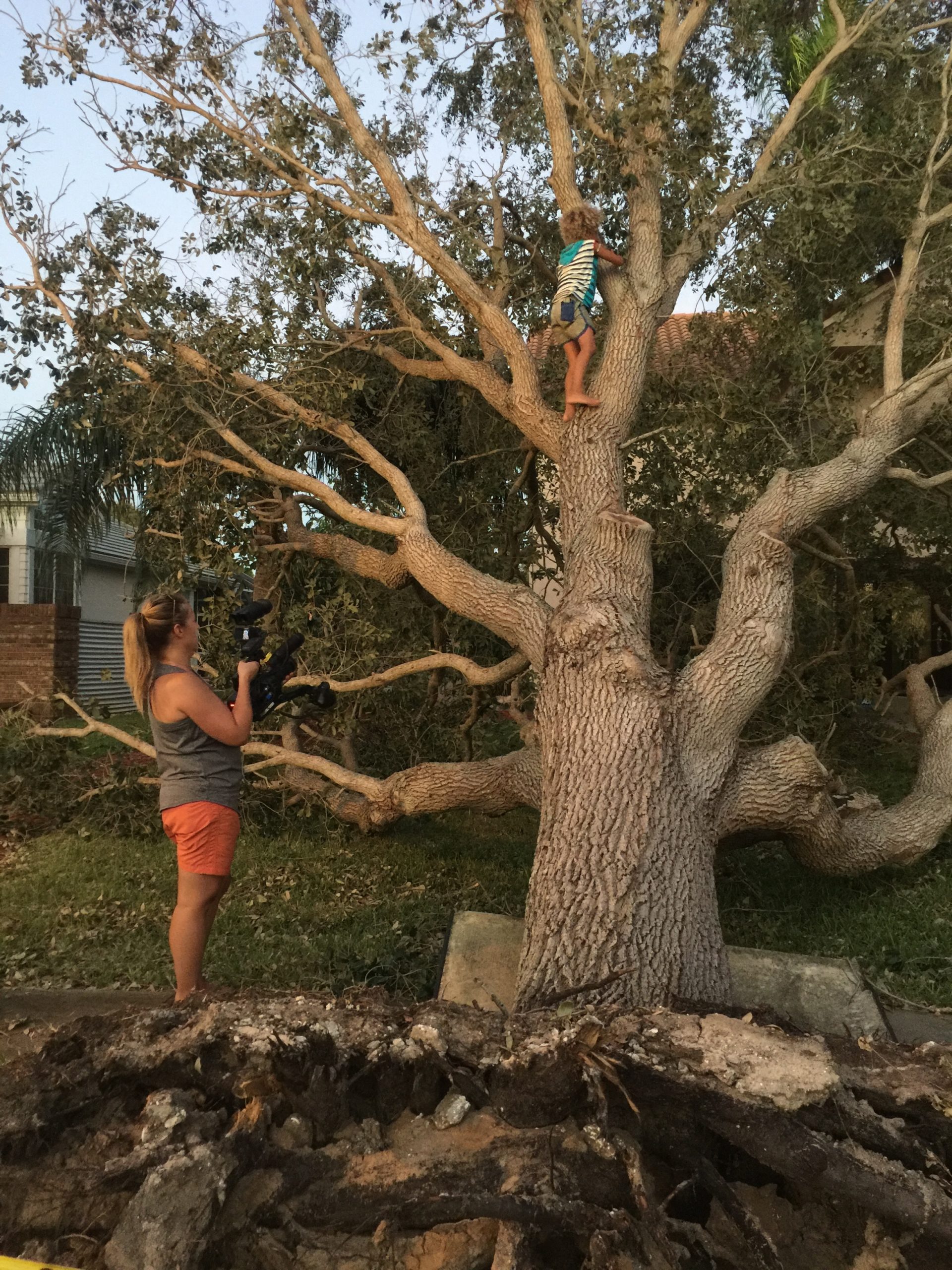 Christi Cooper filming Levi D., a plaintiff in the youth climate change case, in a tree near his Florida home after a storm. LYNNE REID 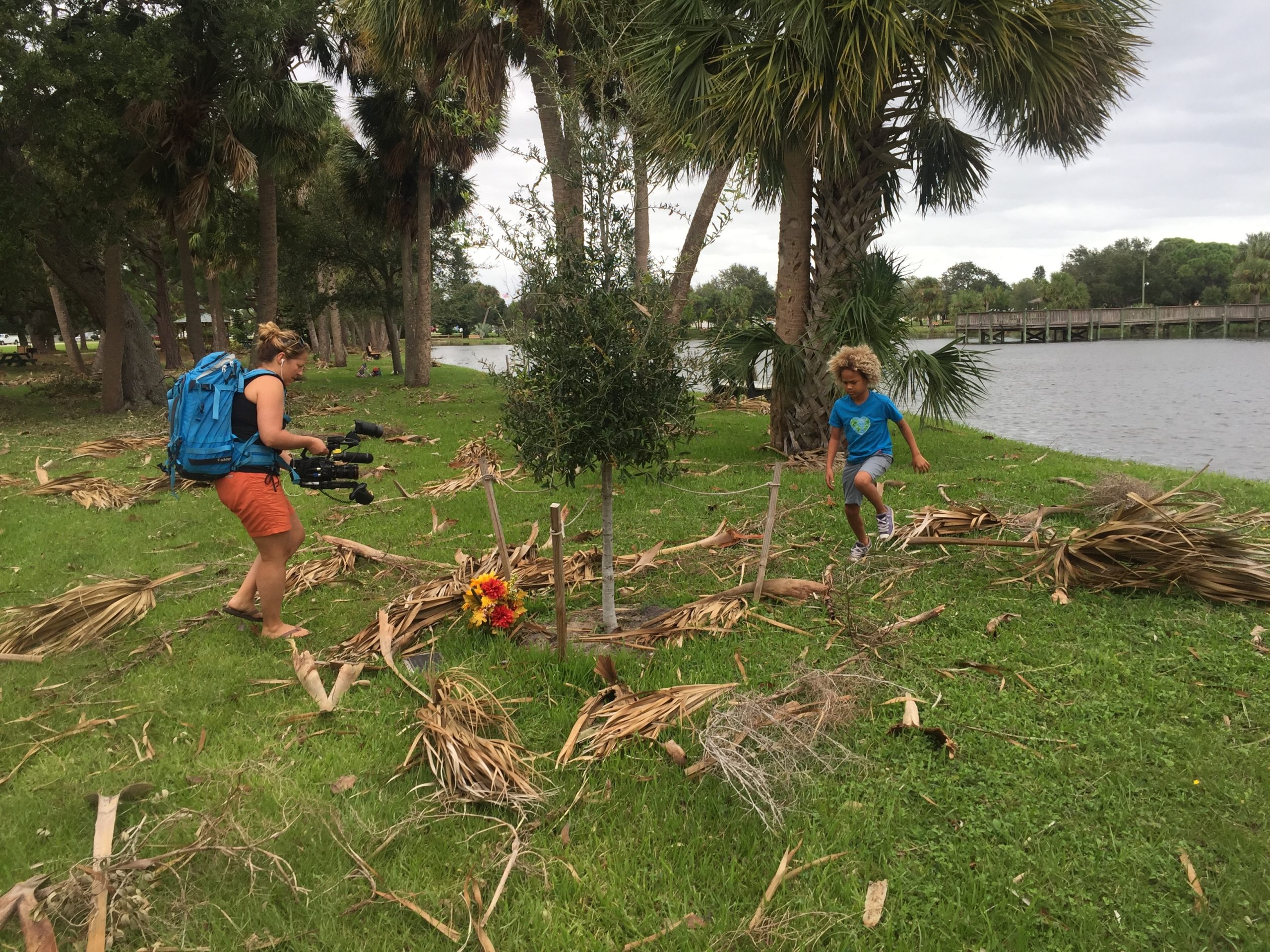 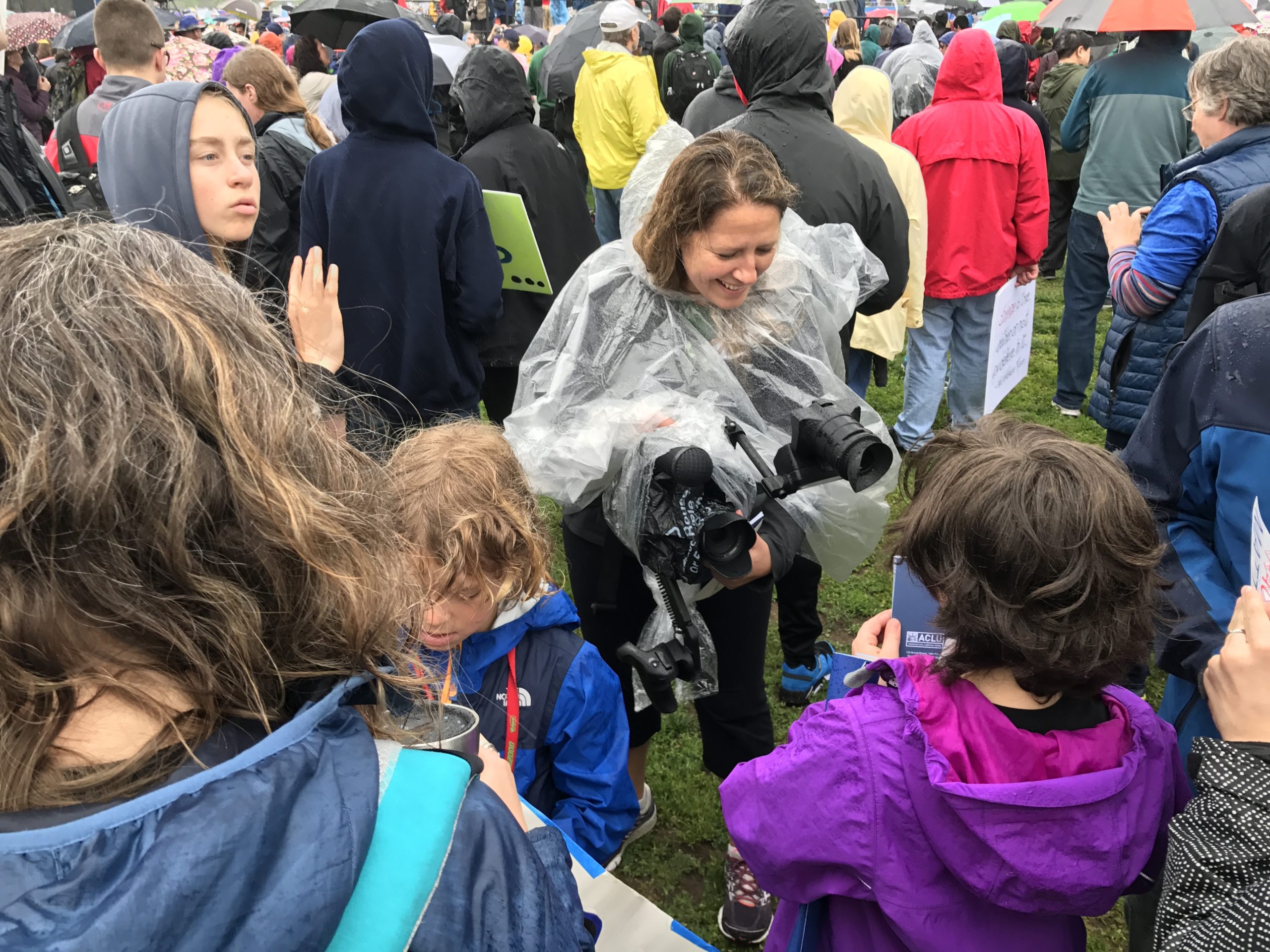 As far as court cases go, “Juliana vs. The United States” was certainly unusual.

The 2015 case was named for Oregon resident Kelsey Juliana, the oldest of 21 young plaintiffs from around the country who sued the federal government for its role in promoting the fossil fuel industry, thereby failing to protect their constitutional right to a stable climate.

From West Coast wildfires and East Coast flooding, to destructive hurricanes in the South and severe drought in between, the plaintiffs, all between the ages of 8 and 18 when the suit was first filed by the Oregon-based group Our Children’s Trust, argued that specific incidents affecting their lives are directly linked to climate change due to U.S. governmental policy.

The case argues that it’s a policy that began in the mid-20th century, and Julia Olson, the children’s lead lawyer, claims to have documents from the era supporting their position that the government understood that its decisions on the use of fossil fuels would adversely impact the environment for future generations.

The plaintiffs include Arizona’s Jamie Lynn Butler, who claims she was forced to leave her home because of water scarcity, thereby separating her from relatives on the Navajo Reservation, and the case’s youngest plaintiff, 13-year-old Floridian Levi D. (who was 8 when it began), who said that powerful hurricanes have required him to evacuate his coastal home multiple times due to flooding. Other plaintiffs cited an inability to farm their land because of changing weather patterns, or physical ailments from pollution and their goal was to obtain an injunction ordering the government to implement a plan to phase out fossil fuel emissions and draw down atmospheric carbon dioxide emission.

Their journey is documented in “Youth v Gov,” a new film by Montana-based filmmaker Christi Cooper that followed the children’s case as it made its way through the Ninth Circuit Court of Appeals more than a year ago. From March 12 to 18, the film will screen in the HamptonsFilm virtual screening room as part of the “Air, Land + Sea” series, which was founded in 2016 to generate awareness around man-made environmental issues.

For Cooper, the kids and their stories of climate change were something she first became aware of while working with Witness, a New York-based international nonprofit that helps people use video and technology for social change and to protect and defend human rights.

“I worked on 10 short films that were stories focused on youth plaintiffs suing state governments,” Cooper explained in a recent phone interview. “They were 7 to 10 minute pieces with kids from all over — Iowa, Pennsylvania, New York — that was my entry point.

“I had developed a relationship with these young people, and in 2015, when the case was filed, I was watching with interest,” said Cooper, who adds that it was based on constitutional principles and felt as if it had more legs to stand on than previous similar cases. “The case had bounced around the federal courts for five years and multiple trial dates were canceled.

“In April 2016, they won the first motion to dismiss — that’s when I realized I needed to drop everything and cover this,” she added.

Months after hearing arguments to determine whether or not “Juliana vs. The United States” could be heard, in January 2020, the three-judge panel of the Ninth Circuit Court handed down its decision. While it found the case met two of the three elements of standing — that the plaintiffs had been harmed and the government had caused the harm — in a 2-1 decision, it deemed that the third element, addressability, meaning a recovery plan, wasn’t within the court’s power to mandate. That, they said, is the job of the executive and legislative branches and the decision added that the plaintiffs’ case must instead be made to the political branches or to the electorate at large.

“But the dissenting judge felt they did have the power,” said Cooper, who compares the case to the 1954 “Brown vs. Board of Education” decision in which the courts didn’t create remedies to address segregation, but did weigh in on governmental plans to remedy it.

“The court doesn’t say what needs to happen, just that they’ll enforce the rule of law and enact these laws,” Cooper added. “There was declaratory relief for the court to declare young people being segregated in schools violated their rights, that’s what led to remedies provided in ’55.

“Similarly, this case was asking for declaratory relief,” she added. “This is where the court got it wrong.”

For that reason, the plaintiffs’ lawyers filed a petition for the court to review the decision, and two weeks ago, were denied a review.

“Now they’ll be appealing to the Supreme Court,” said Cooper.

While climate change has become a politically charged partisan issue in recent years, Cooper notes that when it comes to this topic, she finds there is blame on all sides. Even elected leaders who have spoken out about protecting the environment have, behind the scenes, instituted policies that benefit polluting industries.

“We have failures across the board — both Democrats and Republicans,” she said. “I think one of the most disheartening aspects of the film is how even progressive administrations pledged to protect the environment, but did little of substance to change the equation.

“It’s really about the law and what’s right or wrong, what our government knows and what have the scientists been telling us for decades.”

While the plaintiffs have yet to get an opportunity to present their evidence in court — every court preceding so far has been about procedure rather than presenting documentation — Cooper notes that in making her film, she had the opportunity to share some of that information showing an awareness about the environmental damage governmental policies would cause in the future.

“We were able to dig into the information through a year and half of our research,” she said. “The legal team has thousands of pages. Their ultimate goal is to get to present the documentation.”

While the children plaintiffs in Cooper’s film come off as knowledgeable and confident when speaking about the issue of climate change, she notes that it wasn’t their loquaciousness that led them to be selected for the lawsuit.

“The plaintiffs were chosen because of the harms they experienced. It was a diverse range of experiences — flooding, drought, hurricanes, wildfires, the whole gamut — with this group of plaintiffs. It was young people experiencing true harm by climate change,” said Cooper.

She notes that when she first began filming, many of the children were shy and uncomfortable about being public figures or speaking in front of people. But that changed as they gained support and grew accustomed to talking about their stories.

“I don’t know if it was apparent in the film, but they became more eloquent in speaking through the course of time,” she said. “There was a shift in elevating the youth voice to be as important as other voices — a sense of empowerment.”

In the years since “Juliana vs. The United States” first began making its way through the court system, many of the child plaintiffs have grown into adults. Kelsey Juliana, now 24, is working to finish her college degree and realize her dream of becoming an educator, while Jamie Lynn Butler, 19, is exploring the tiny home life, and has revamped an RV with her boyfriend and is trying to live off-grid.

But they all remain committed to getting their day in court and will petition the U.S. Supreme Court to hear them out.

“This case is definitely moving forward. It’s not dead by any means,” said Cooper, adding that with the recent election, the youth plaintiffs and their lawyers are now trying to connect with the Biden administration and give it an option of coming to the settlement table.

“Not only is the President a defendant in this case, but so are 12 or 13 agencies in the executive branch, including the secretaries of the Department of Transportation, the Interior, Agriculture, and Commerce Department,” Cooper explained. “Any one of these defendants can have a settlement. You don’t have to go to trial.

“I’m kind of excited,” she added. “There are a lot of options with the Biden administration inheriting this case. He’s talking strongly on climate issues and change, but we’ve seen a lot of talk and little action in the past.”

In the meantime, she notes, youth climate cases are now working their way through court systems around the world.

“In the Netherlands, they won in their supreme court,” said Cooper. “The Dutch court mandated they have to reduce climate emissions by 2050.”

It’s a small victory, but a victory, nonetheless. While environmental events due to climate change are only likely to grow in scope and scale in the years ahead, in her work as a filmmaker, Cooper finds the passion and commitment she has witnessed among the youth tackling the issue head-on gives her a great deal to be hopeful about.

“I feel they have such a capacity for empathy and a strong moral compass and a sense of justice — more so than the earlier generation,” said Cooper. “This generation, in particular, is the most impactful and compassionate. They’re growing up in a world of tolerance and have such a strong sense of right and wrong.”

“Youth v Gov” will be available as a virtual “Air, Land + Sea” film screening from March 12 to March 18, through HamptonsFilm at hamptonsfilm.org. The film was recently screened by members of East Hampton High School’s Environmental Club, who recorded a video discussion about it and shared information related to their local environmental efforts and activities. The club’s discussion will be available for free on the HamptonsFilm website.