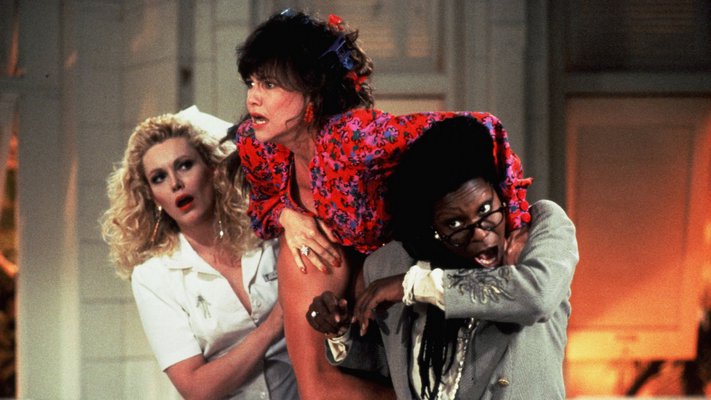 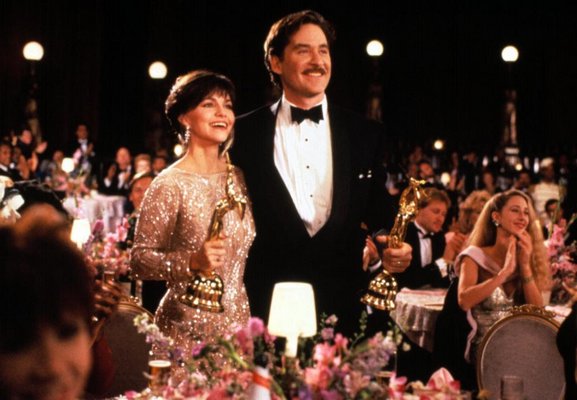 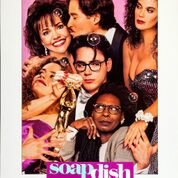 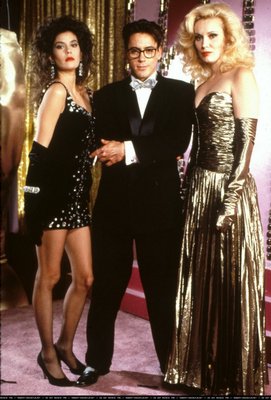 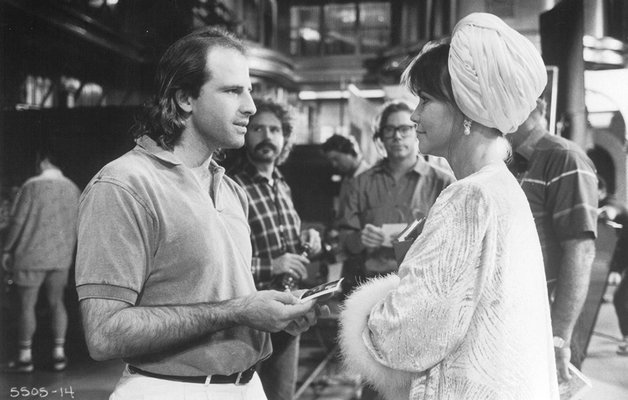 Director Michael Hoffman, left, with actress Sally Field on the set of "Soapdish." 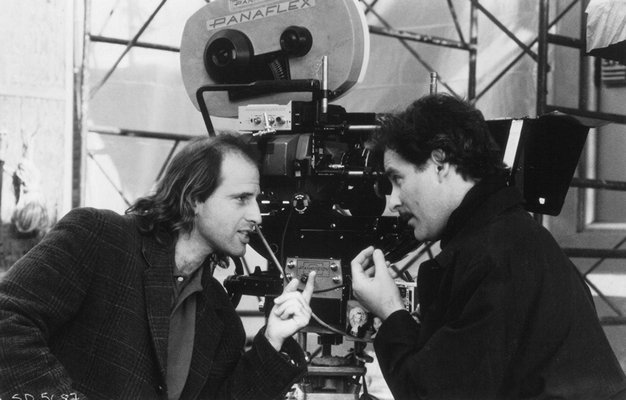 Director Michael Hoffman, left, with actor Kevin Kline on the set of "Soapdish."PHOTO BY PARAMOUNT PICTURES - © 1991

Michael Hoffman never aspired to make a film about a soap opera, but he couldn’t turn down “Soapdish” — a farce that, at its core, was really about actors.

The set and story mirrored Dante’s “Inferno,” capturing the surreal on- and off-camera worlds of daytime drama actors as they navigate the realms of hell, from lust and greed to wrath and treachery — with the executives at the top, the technicians at the bottom, and the actors somewhere in the middle.

“It was one of those things, quite honestly, that took on a life of its own,” Hoffman said. “I was working on a couple projects at the time and I hadn’t ever made a studio movie and I didn’t really know if I wanted to live in that world. But I just kept having remarkable things happen, in terms of offering it to people and finding that they were really drawn to it, as well.”

First came Oscar-winner Sally Field, who portrays Celeste Talbot, the leading lady of the beloved soap “The Sun Also Sets.” She attracted the likes of Whoopi Goldberg, who managed to squeeze in time between “Star Trek: The Next Generation” and “Bagdad Cafe.” The role of a slimy 45-year-old producer with a zebra-skin casting couch was reworked to accommodate a much younger Robert Downey, Jr., and eventually, Kevin Kline signed on to foil Field.

Despite the star-studded cast, the ensemble comedy, which was released in 1991, wasn’t a critical hit at first, but has since amassed a cult following, including famed director John Landis, who selected “Soapdish” as part of his “Really Funny” series for the Sag Harbor Cinema, screening Sunday, September 8, in the Pierson High School auditorium.

“Knowing that John Landis chose it, that’s an honor,” Hoffman said. “He knows a lot about very funny.”

Ahead of the screening, the director caught up with The Express News Group to reminisce about “Soapdish,” one of the most hilarious and rewarding projects of his life.

Q: What initially attracted you to “Soapdish”?

Robert Harling’s initial draft had a great mythological underpinning. It was a great fairy tale about family, underneath it all, and about the cost of lying and the poison it creates. And I always think great comedy needs to have something very serious underneath it to really work. Robert did that. Then, Andy Bergman came in and wrote some of the funniest stuff I’ve ever been gifted with, by any writer.

Soap opera itself was inspiring only in that one of the things that makes farce work is when people are chasing absurdly low stakes with tremendous energy. It’s what fuels farce, and I saw that potential in it.

Q: What was your point of departure, as a director?

I always loved that it brought up for me everything from “Pillow Talk” to “Women on the Verge of a Nervous Breakdown” to “The Women.” In fact, during the rehearsal process, I got all the actors together and we watched all those films together and talked about style. That was one of the biggest challenges of the movie — how do I get everybody to trust playing in this very heightened style? Because it can tip over into just bad acting really easily, and I didn’t even have them all in rehearsal at the same time.

Kevin was in New York and Sally was in L.A. and Downey was doing another movie, so I ran back and forth between New York and Los Angeles a lot. If I could get three or four actors in the room for a rehearsal, we’d work together and I would show what we’d done to the other actors. I needed them to all be in the same world.

Q: How much of the cast was in place when you came on?

Absolutely no one. There was no one involved and I don’t believe Paramount even thought they were gonna make that movie. It was a day in which the studios would have a lot of stuff in development. Some of them, they were willing to take a chance.

We wrote the draft and we got two acts really working, and went to Sally Field and she said yes. The thing that was really interesting was Sally was such a boon. She was so attractive to other actors as a piece of the puzzle.

I had met Downey some years before on another project. It wasn’t the way that role was written — it was written to be much older — and I said to the producer that I wanted to talk to Downey about it. There was quite a bit of pushback, interestingly enough, given who Robert Downey is now. But I just kept hanging in there and we kept working together and writing the part for him, and it became clearer and clearer he was the absolute right person.

Kevin, famously for years, was referred to as “Kevin Decline,” because he passed on everything. I don’t know how many trips to New York it took me to finally wrangle him into doing it. But thank God he did. And then Whoopi joined up largely because she really wanted to work with Sally, and they kept coming in: Garry Marshall, Teri Hatcher, Carrie Fisher, on and on.

Q: What was it like to get this kind of talent for the film?

It was magical. Often in the film business, you feel like the planets are not aligned and you’re rowing against the current. And then once in a while, sometimes these things take on a life of their own and everything starts wanting to happen. It was really a project like that.

Q: The film comes across as very collaborative.

It was certainly that.

Q: How much did the cast’s acting chops help develop the script?

We did a lot of improv in rehearsal and wrote out of the improv. That brought tremendous, tremendous comic riches to certain sequences. Kevin Kline and Downey are both incredible improvisational talents. I would go to rehearsal and we’d rehearse for six hours and improv a lot, and I’d go back to Andy Bergman’s office with literally 300 pages of rough, rough paper that I’d scrawled on during the rehearsal. And we’d just start going through them, looking for this line, that line, this line, that line.

The more we used the work of the actors in the script, the more invested the actors got in the writing process. People then, through the whole process, felt very free to carry on creating, carrying on improvising, carrying on trying things. We were inventing things all the time.

Q: Which scenes come straight out of improv?

A lot of the last scene in the restaurant was improvised. And Downey is a genius improviser. So many things Downey found. His line, when he just turned and said, “No turbans for Miss Talbot.” I mean, it was a huge laugh.

The first preview of that movie, nobody knew if it was gonna work at all. The studio was quite worried. Farce on film usually fails, and people literally fell out of their seats into the aisle. I saw two people fall out of their seats, I didn’t think it actually happened but I did see it happen in the Paramount previews theater. They were heartened by that.

Q: How did you navigate that line between farce and actual soap opera?

I don’t know if I really did. It’s a farce and the script is kind of constructed like soap opera, right? What’s happening to the characters is mirroring the grandness of dramatic problem that soap opera has in it. Constructing the script properly took care of all that parallel, and then it was about finding the language in the world that we were creating.

In some ways, it is much more heightened than soap opera, and we also did things like bring in a costume designer who designed “Dallas” and “Dynasty,” and he was all about big hair and big shoulders and big boobs, and so it was taking everything and heightening it.

Q: Why do you think audiences are still so obsessed with this film?

I don’t know. It’s its own world, and it’s a world that I don’t think dates, in a way. It’s kind of outside time, so that helps it. There’s a lot of brilliant comic acting in it, line for line, but it also has this underlying big-heartedness that comes from this concern with family, and the really understandable stuff. It’s grounded in some kind of emotional truth, and I think that helps its longevity.

Q: What did you ultimately take away from this project?

I was pretty scared during a lot of it, to tell you the honest truth. I was always scared directing movies in the beginning; I didn’t go to film school or anything, so I was always thinking, “Why is anyone going to listen to me?” I guess I walked away with a confidence about things I believe — about the way comedy operates and things about structure and story that I believe in very strongly, that I really stuck to my guns.

I learned to trust my instincts and found out my instincts were pretty good. I’d learned in a couple movies before, where I was going, “You know what? I think that’s okay. That’s probably gonna be okay. We’re gonna get away with that,” and then learning that you don’t.

Cinema’s ruthless. I’ve come to learn that if something feels like it might not work, it probably doesn’t. This was the first movie where I was really hard on myself and I didn’t let anything go, and was sort of rewarded for that. So it was good, because I took it with me.

“Soapdish” will screen on Sunday, September 8, at 6 p.m. at the Pierson High School auditorium, located at 200 Jermain Avenue in Sag Harbor, as part of the “Really Funny” series sponsored by Sag Harbor Cinema. A talkback with Michael Hoffman will follow. Tickets are $10. For more information, visit sagharborcinema.org.