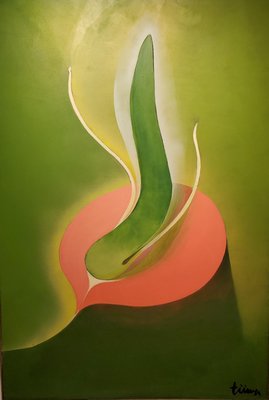 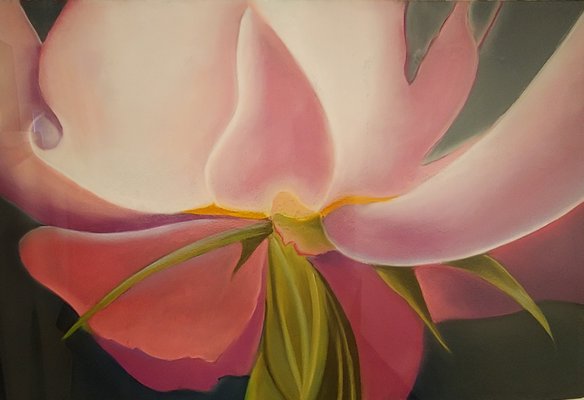 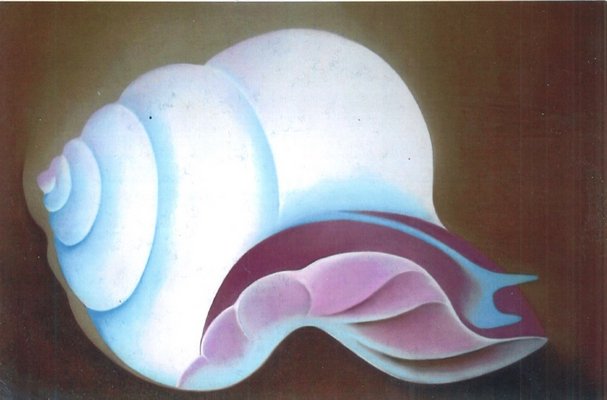 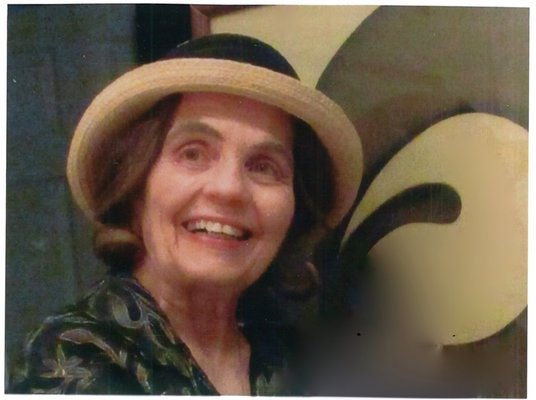 At age 25, Mym Tuma was a newly graduated scholarship student with a master’s degree in hand, having completed the painting program at Stanford University. And in her ecstasy and downright boldness, she sent a letter that would change her life.It was addressed to artist Georgia O’Keeffe — an icon among American female painters — and in it, Ms. Tuma had asked to come visit.

To her surprise, O’Keeffe said yes.

“Arriving there was a step toward the feeling of being a painter,” Ms. Tuma said. “I wanted proof, in reality, that a woman painter could support herself; in other words, what is, is. Coming to see her was part of my existential philosophy — reality is based on observation.”

Despite a 50-year age gap, a natural friendship blossomed, as did a patronage for the young artist, who reflects on her art career and relationship with O’Keeffe in her recently published memoir, “An Embryo of Time,” which relies heavily on their written correspondence from 1964 to 1973.

To this day, their relationship stays with Ms. Tuma, who will anchor a one-woman show, “Organic Abstraction,” on view starting Friday, August 9, at Janet Lehr Fine Arts in East Hampton. Before the opening, Ms. Tuma — a longtime East End resident who now lives in East Moriches — caught up with the Southampton Press to discuss her earliest artistic memories while growing up in Illinois, her friendship with one of the most significant artists of the 20th century, and where she finds inspiration today.

Q: When did you realize you had a predilection for art?

The beginning of my art was experiencing the down-to-earth love of life. We are born out of the rhythms of nature. My ideas germinated from that. It determined the universal forms I create. As a child, I was sensitive to forms — also had a family history of sewing, pattern making. My grandparents were tailors.

But without my mother’s genes to create and the opportunity to play and learn to sew, my visual talent may never have developed. She taught me the power of the material — color, line, form and texture. Touching fabrics refers to the relationship of art to materials that started for me at age 6. By age 10, I could ruffle tulle to make a summer hat. The ruffle tool chugged around it, making noisy harrumphs on the edge as it pierced cardboard. I broke needles and Mom called from below the window, “What are you doing?” “Nothing Mother.” Nothing much. I was pushing the sewing machine to its very limits. I find contemporary mediums compelling, in cloth, paper, paint, epoxy and fiberglass. Abstraction is my root — subjects vary in degrees of abstraction.

Q: When did you first come across Georgia O’Keeffe’s work?

After landing my first job at the architectural firm of Perkins & Will, I created my notion of organic structure based on unitary biologist L.L. Whyte and some men, like architects like [Frank Lloyd] Wright and Le Corbu, before I met Georgia O’Keeffe — the influential elder artist who made a living from paintings in her lifetime.

Wright’s principles of absolute integrity among his pious disciples were some architects I met at work, who gave me the House Beautiful magazine article by Laura Gilpin on O’Keeffe from April 1963 that, later, I taped to the door of my first studio. This woman walked in soft slippers on the earth. I was excited by that. My Chicago friends had planted the seed to approach her and filled in whatever Northwestern University male professors had overlooked.

Q: Why did you want to meet her?

In the 1960s, women did not aspire to careers as they do today. Now, I tolerated the ambiguity between wanting to follow long-established expectations, but also a dedication to my own voice, my own art. And I asked questions. Back then, the odds were against my becoming a painter because women were sidelined. Men did not recognize our goals. “Let the men do the painting, you know, we just washed the brushes.”

Now the pendulum has swung. Women artists, poets and writers are thriving here. They lead creative lives and bring forth something beautiful from beyond the veil. Women trying to show that idea originates within the psyche, just as life originates in nature.

Q: You initiated contact by sending O’Keeffe a letter? Were you intimidated?

Planning a trip home from Stanford with my MA in painting/philosophy, with a fellow graduate student, I decided to write and ask to visit. The letter — creative, polite and personal — began with a poem: “O’Keeffe sits in her desert drawing bones, she sees bones in the road …”

Then I sketched a large skull in pencil and we mailed it folded in a very small envelope. Her large printed notecard, “Starlight Night,” arrived and was signed with her initials inside, “Yes GOK. Thanks for your page!”

I trusted my inner voice and inner vision. I wasn’t easily intimidated.

Q: Why do you think she was interested in helping you?

Looking back, the simplicity of what I did was the boldness of a very young artist seeing no barriers between herself “and a living legend, a central figure in American art: Georgia O’Keeffe.” Think of my naiveté, going to a veteran artist and asking for her help to launch new work. The openness and directness of my untutored approach so astonished O’Keeffe that she took me under her wing and she became a patron. If there had been 50 people who took the same approach, she would have stopped them long ago, but no one else was direct enough to say to O’Keeffe, “I understand what you’re doing because I understand what I’m doing.” That’s the whole point in explaining how our relationship took its shape. If you stop to think about it, that’s totally logical.

When I first met O’Keeffe, I was learning to survive. I brought my artworks to show her, unsure if she’d buy them. Why would O’Keeffe purchase a young artist’s work? But she did, indeed, pay $2,000 for my early fiberglass form, “Obsidian, 1967.”

The point is, our interest in abstracting forms from nature was mutual. That fueled our relationship. O’Keeffe found a kinship with my work and thought it was honest and direct and wanted to own it; a typical reaction of people who value beauty, who are in the world of beauty and constantly exposed to it. We had talked about what I needed to paint. She knew I needed $2,000 to support my remote studio in Mexico. Since that piece appealed to her, later, it inspired her to do something else. It opened up new directions for her.

Nevertheless, I was profoundly pleased that Miss O’Keeffe was so moved and inspired by my work that she continued to correspond, and each time I drove 2,500 miles up and back until 1972.

Q: How did your friendship change you?

I have thought of all the possible reasons or whys, but what developed was what her inspiration gave to me: to be able to continue my art. What’s important is how that purchase developed our relationship for the future years.

Q: Do you ever find yourself missing her?

Yes — also, Henry Geldzahler whom I met in 1992, 20 years later. His selection of my pastels for [an] exhibition [at Clayton Liberatore Gallery] in Bridgehampton sharply focused on what he called “lighted from within.” Ten drawings to show the “distillation of my achievements.” He used the word “beautiful” liberally with a penetrating look for how I resolved the visual elements. I was finding my way from germinal beginnings; I continue to learn that the universe and everything we know in it is a vast web of energetic forces.

Q: Where do you find inspiration today?

In 1991, right before the October storm, Hurricane Bob, I came here. Several nor’easters later, such elemental forces plus the light, the beauty and the graciousness of the natural surroundings are the focus of my work. I find solace and new possibilities in nature’s seasons in the Hamptons.

I live and work in the Hamptons, as opposed to elsewhere, for much of the same reasons that brought me here. Plus, there is a savvy and sophisticated art audience in the Hamptons who value and appreciate good art. This is somewhat of a contradiction. I have an ecocentric rather than an egocentric view. Humans aren’t the only species on Earth; we just act like it. But, I’ve found the freedom to express this sense of place good for my creative voice.

Q: What was your point of departure for the work in the upcoming show?

Anticipating my upcoming show, the work will be centered on the theme “Land Forms,” including works, in particular, based on the shores of Southampton, where I find inspiration in spirals and spheres. Specifically, the exquisite light’s optical effects are reflected, e.g. a painting of shells revealed in the moonlight on the beach. The coastal marine environment produces forms that birth life and regeneration. The curved horseshoe crab shell represents the monument of eons past.

Note: This interview has been edited for length and clarity.

“Organic Abstraction,” a solo exhbition featuring the work of Mym Tuma opens with a reception on Friday, August 9, from 5:30 to 8:30 p.m. at Janet Lehr Fine Arts, located at 68 Park Place in East Hampton. The show will remain on view through Friday, August 30. For more information, call 631-324-3303 or visit janetlehrfinearts.com.