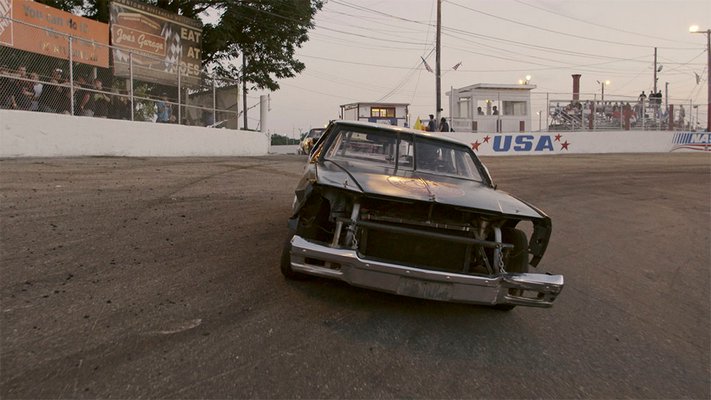 The roots of stock car racing in America can be traced to Long Island. Many Southerners would flinch at the very thought of racing beginning on Long Island, but it’s true.In fact, during Long Island racing’s prime, there were at least 40 tracks situated across the island, including a drag strip in Westhampton Beach, and ovals in places like Freeport, Central Islip and Riverhead. Today, only the latter still operates as a raceway, as the rising cost of real estate on Long Island and the inability to turn a profit forced many track owners to shut down operations and sell the properties the tracks were on.

Fine art photographer and director Michael Dweck decided to focus his lenses on the downfall of racing on Long Island in his first feature-length documentary, “The Last Race,” which will be shown during the Hamptons International Film Festival this weekend.

As a race fan and New York native, Mr. Dweck, 61, a part-time Montauk resident, has seen firsthand the closing of numerous tracks across Long Island.

Growing up during the 1960s in Bellmore, a young Mr. Dweck spent many weekend nights at the Freeport Stadium, a speedway where fans could watch their favorite hometown driver race around the fifth-of-a-mile oval track against other drivers for a taste of victory.

“I started going there when I was 4,” Mr. Dweck said, noting that the home he grew up in was located nearby. “That’s all I looked forward to. It was rare that I would miss a race.”

Sometimes he would ride his bike up to the track and try to get in, but would be turned away because he was too young to enter unsupervised.

On nights that he missed going to the races, Mr. Dweck could look outside and see the lights from the track along with the smoke-filled air.

The roaring engines, the squealing tires and the pungent smell of burned rubber in the air, all added to the racing experience. At times, the victor would come away unscathed, without rubbing or bumping his car into an opponent’s car, but those times were rare—the chances of seeing a fist fight break out between two drivers from making contact on the track were better.

But fighting was a display of the heart and determination the drivers put into their cars and those races.

Scenes like this can be seen in Riverhead on Saturday nights during the summer, and in Mr. Dweck’s film.

“The Last Race” follows racing at Riverhead Speedway and gives viewers an idea of what it is like to be at the track.

In particular, Mr. Dweck focuses on the Blunderbust series, an entry-level form of racing where drivers race in 4,200-pound stock cars.

Mr. Dweck said he chose the series because the drivers have to craft the cars by hand. They can take a 1977 Caprice Classic, rip it apart and weld it back together to meet racing regulation specs.

The drivers put months into the cars.

And the best part: the drivers are allowed to bump into one another and rub fenders.

“It was something that anybody could do … and anybody can afford,” Mr. Dweck said. “This is the last track in the country, that I know of, that is racing these types of cars.”

Mr. Dweck said Riverhead Raceway is the oldest track, and in his film, he wanted to show what it was like to spend a night at the track.

He also focuses on the uncertain future the track faces, as big box stores continue to be constructed around the track and the value of the land continues to go up. The current value of the track and land it sits on, according to Mr. Dweck, is approximately $10 million.

The project started out with Mr. Dweck shooting photos to capture the scene of the racetrack, but after five years, he discovered that film would be necessary. So, between 2012 and 2017, Mr. Dweck went to the track on race nights. He welded DSLR cameras on the inside and outside of the Blunderbust cars.

He also shot from various corners and viewpoints around the track, and captured action in the pits.

Ultimately, he wanted to show what was in his imagination as a child, on those nights that he could not go to the races in Freeport.

“I believe grassroots racing culture is important,” Mr. Dweck said. “It’s a breeding ground for the next generation of racers.

“There’s such a strong racing culture on Long Island.”

The Last Race" will screen on Saturday, October 6, at 3 p.m. at the East Hampton United Artists cinema and on Sunday, October 7, at 3:45 p.m. at the Westhampton Beach Performing Arts Center.