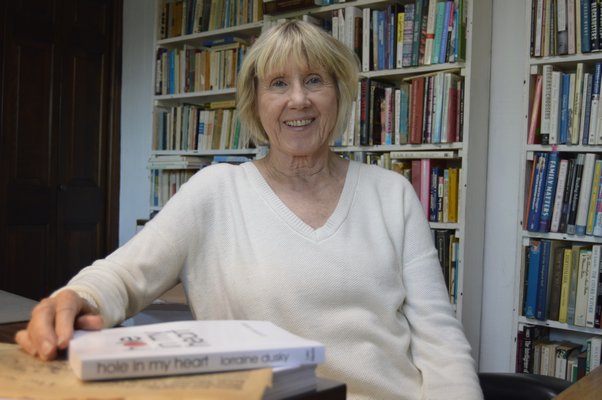 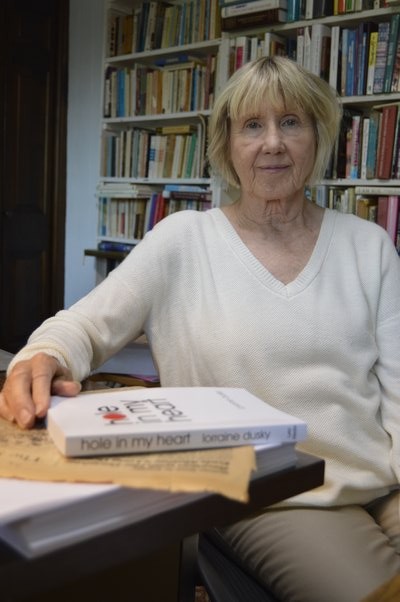 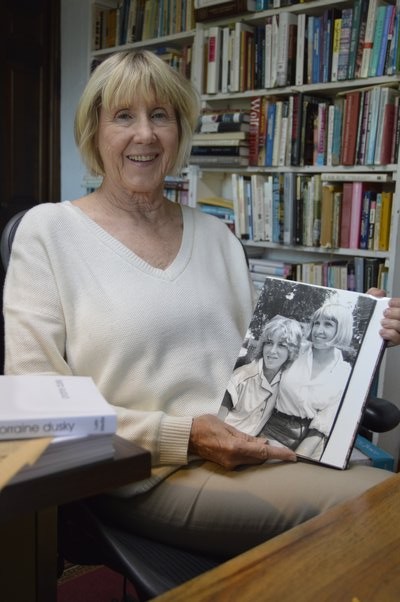 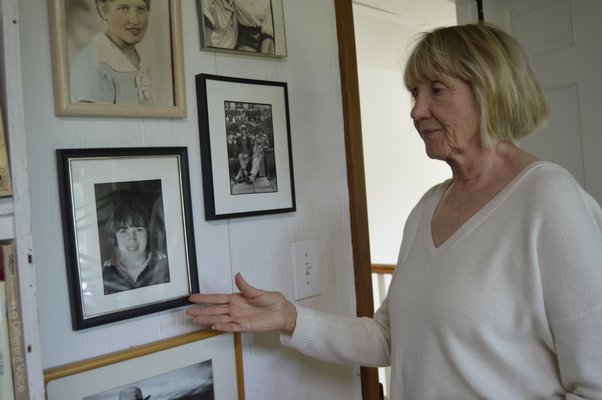 April 5, 1966. It is a day forever etched in Lorraine Dusky’s mind. It is the day her first and only child was born, a daughter she would surrender to adoption just two weeks later.

Fifteen years of grief and loss passed before Ms. Dusky saw her again. The couple that adopted her had named her Jane. Their reunion led to a loving yet rocky relationship spanning more than two decades, ultimately ending with her daughter’s suicide in 2007.

The tragedy deeply changed Ms. Dusky as a person, informing her newest memoir, “Hole In My Heart,” in ways she had never anticipated. Published on June 3 by Leto Media, the book follows her groundbreaking “Birthmark” in 1979, which chronicled her push to change adoption laws after giving up Jane.

Ms. Dusky, who is a freelance writer for The Press, said she knew she wanted to write another book about her experience with adoption the moment she met Jane, though she began to write it only five years ago after decades of research. The tentative title was “Happy Ending,” she said. It turned out to be more complex than that.

“It’s not pro-adoption. It talks about the problems of giving up and being adopted. And adoption is a small word for the trauma and grief that, being a mother who gives up a child, and being a child given up, causes,” Ms. Dusky said over lunch at Marine Park in Sag Harbor, not far from where she lives with her husband, Anthony Brandt.

“I think there are still a lot of people who see adoption as a good thing, without caveats,” she continued. “For them, the book might be a real wake-up call.”

Hailing from the suburbs of Detroit, Ms. Dusky moved to Rochester to work as a journalist for The Democrat & Chronicle shortly after attending Wayne State University from 1960 to 1964. She was 22 and unmarried when she discovered she was pregnant. In 1965, she quit her job and hid the growing baby from everyone, even her family. It was an unforgiving era for children born out of wedlock.

“I did not feel like I had a choice. People today think of the ’60s as some exotic era when sex, love, drugs, and rock and roll, and getting pregnant should have been no big deal,” she said. “It wasn’t like that at all. It was so shameful. It was so terrible to be pregnant and not married.”

That didn’t mean Ms. Dusky was at peace with her decision, which she described as “preordained.” For six years following, she felt empty. “You know something is missing. You know you did a bad thing.”

But 1972 marked another big change. After stumbling across an article about adoption in The New York Times, Ms. Dusky joined the Adoptees Liberty Movement Association, or ALMA, and launched a nine-year search for her daughter, simultaneously pushing for changes to adoption laws across the country.

During that process, she penned “Birthmark,” landing her on numerous talk shows to discuss her, at the time, controversial views. She was the first woman to publicly start the conversation about adoption—suggesting that birth parent identities should not be kept a secret from adoptees.

The law sealing original birth records—the same one she has fought for decades—still exists today in most states. Next year, New Jersey will open its records, one step toward further reform.

In 1981, it simply hadn’t come. Ms. Dusky resorted to a man they called The Searcher. Whether he was a private detective, judge, social worker, or employee with the FBI or CIA remains uncertain. All she knows is, $1,200 led her to a brief telephone conversation with then-15-year-old Jane.

It was anything but a joy-filled, tearful reunion.

“I had to find out if you knew you were adopted,” Ms. Dusky had told her. “That’s why I made that weird phone call a half hour ago.”

Meeting face to face three days later in Wisconsin, where Jane lived, proved to be somewhat awkward. Ms. Dusky was nerve-wracked, wondering what to talk to her about. And Jane, she would later find out, was extremely cautious with her actions and words, so as not to offend her father, Gary Rhymer, who supervised the visit.

An unusual relationship was born, Ms. Dusky explained. While Jane didn’t call her “Mom,” they did see each other often, despite living in different states. Jane’s birth father, Patrick Brasley, did not wish to meet her. And not only did Jane grapple with being given up for adoption, she also suffered from epilepsy—one of the more troubling parts of her life and, most likely, a reason for her suicide.

Tearing up behind her dark red sunglasses, Ms. Dusky explained Jane had tried to kill herself several times before.

“Giving up a child is the most horrendous, difficult thing any woman could do. Every fiber of your body is telling you, ‘You have to keep it.’ It’s kind of unknown what’s going to happen to them,” she said. “Adoptees always have feelings of not having control over a situation. They didn’t ask to be adopted. There’s anger, there’s issues of abandonment.”

Today, Ms. Dusky continues her battle to open adoption records and, with the backing of local politicians, she said she is hopeful that change will happen sooner rather than later, as many adoptees often wait for their parents to die before embarking on their journey to find their biological mothers and fathers. In the meantime, she still keeps in touch with Jane’s husband, Bill, and their daughter, Britt, whose name was changed for the book and this article.

Ms. Dusky lost Jane, found her, and then lost her again. In the years since, she has coped. The time not knowing her daughter at all was far worse.

“It was easier to grieve for her dying than it was to grieve about losing her to adoption, because you know what’s happened and you know there isn’t any more you can do for her,” she said. “I can’t imagine my life without her in it. It would have been a sad life.”

Lorraine Dusky will read from her new memoir, “Hole In My Heart,” on Saturday, June 20, at 5 p.m. at Canio’s Books in Sag Harbor. For more information, visit caniosbooks.com. To read Ms. Dusky’s blog, visit firstmotherforum.com.

This week, The Watermill Center (TWC) welcomes its newest artists-in-residence: dancer and choreographer Yusha-Marie Sorzano and researcher and poet Zoë Hitzig. The new artists are the latest group to continue TWC’s hybrid residency program, with Sorzano working onsite at the East End campus, while Hitzig is working virtually from her home studio. Sorzano’s residency marks the second year of YoungArts and TWC’s Mentorship Residency, launched last year in partnership between the Center and The National YoungArts Foundation (YoungArts). The program annually welcomes an alumnus from YoungArts to The Watermill Center for a residency to foster the ongoing growth and development ... 1 Mar 2021 by Staff Writer