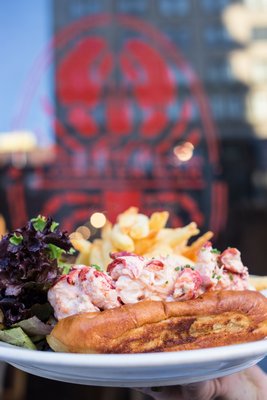 Last October, BayBurger, the popular spot for burgers and fries just outside Sag Harbor Village, closed its doors for good. After more than 10 years in business, husband and wife owners Joe and Liza Tremblay decided that with two small children at home, it was time to do something new. Foodies who have spent all winter wondering what will come next for the space need wonder no more.

Chef Ed McFarland of Ed’s Lobster Bar in New York City has announced that he’s opening an outpost of his popular SoHo eatery in the space with plans to have Ed’s Lobster Bar East, his second location, up and running by Memorial Day.

“It’s been a long time coming,” said Mr. McFarland by phone on Monday. “I’ve had a lot of customers telling me I should open somewhere near Sag Harbor. Over the years, it’s always been in the back of my mind to do it. Due to other changes in the city, now happens to make it a good time to go forward.”

In recent years, Mr. McFarland, who has a five-year lease on the space, had considered other locations and villages on the East End, but finding the Sag Harbor restaurant had a touch of kismet to it.

“I was driving by BayBurger, it was after the season had ended, and I saw a sign that said it was available,” recalled Mr. McFarland. “I stopped short and did a U-turn and went to see the space. Though I thought being right in the center of town would be great, it’s tough parking. Having the parking there was key.”

Mr. McFarland, a 1995 graduate of the International Culinary Institute, opened Ed’s Lobster Bar in 2007. The most popular items from his SoHo menu will find their way to the Sag Harbor location. In addition to fish plates and raw bar bites, diners can expect classic lobster rolls in two sizes (selling for $20 and $35) as well as Mr. McFarland’s famous lobster meatballs and New England clam chowder. In addition, Ed’s Lobster Bar East will also offer new menu items curated specifically for the Sag Harbor location, including fish sandwiches, lobster pizza and baskets of fried scallops and shrimps.

At 1,400 square feet, the Sag Harbor restaurant will be constructed to resemble a traditional seaside fish house. With an open kitchen layout, the plans call for 50 seats indoors and another 30 seats of outdoor dining. But this is no take-out clam shack. Diners will be served on real plates inside and outdoor ware in the al fresco seating areas.

“To me, wanting to come out here so long and jumping forward is exciting,” said Mr. McFarland when asked how he feels about this new East End venture. “Any new venture is exciting and it’s my number one focus now. I’m working on getting it up and running to the standard I’m at in New York City.

“I like the uniqueness of the space and the outdoor seating area in the back, and we’ll have an outdoor bar,” he added, noting that this summer, he expects to spend half his time on the East End and the other half back in New York.

But with Memorial Day weekend now less than a month away, the big question is, can Mr. McFarland and his team get the restaurant up and running quickly?

“The place is really almost turnkey for me now. There’s virtually no kitchen work to do,” he said. “Inside, we’ll add Carrera marble tables and a bar, which should take two to three weeks. My biggest work will be outside, which will take about the same amount of time.”

Look for Ed’s Lobster Bar East to be open seven days a week from Memorial Day weekend through Labor Day weekend with seafood specialties available for lunch and dinner. The restaurant will also serve a breakfast and brunch menu on Saturdays and Sundays. Ed’s Lobster Bar East plans to offer a full catering menu for gatherings and events, as well as a to-go menu for local pickup and delivery orders. The restaurant will operate with limited hours during the off-season.

And for those who miss the much beloved Joe and Liza’s Ice Cream that finished many a BayBurger meal, dry your tears … ice cream will be available.