Magic Historian Teaches How To Wow The Grandkids With ‘Grandpa Magic’ 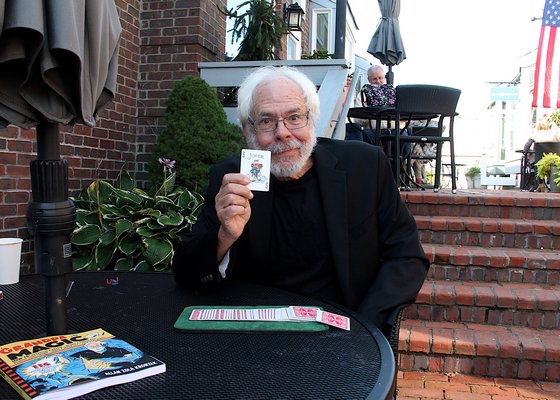 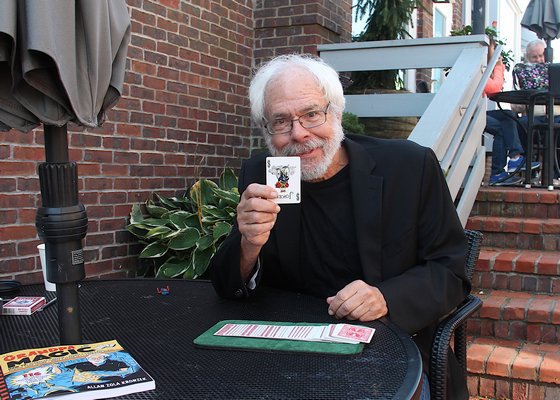 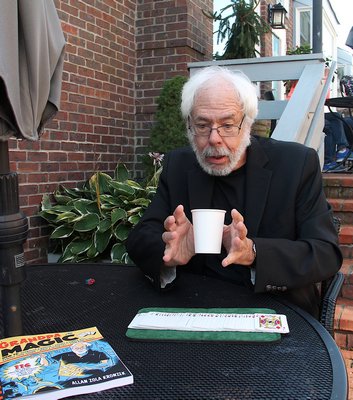 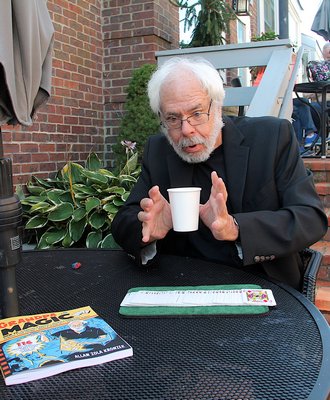 Although he carries around a small bag of magic props, Allan Zola Kronzek doesn’t compare himself to Harry Houdini, the Amazing Randi or Criss Angel. In fact, Mr. Kronzek refers to himself, first and foremost, not as a magician but as a writer who has dabbled in magic for most of his life. His discovery of the mystifying world of magic at the age of 7 propelled him into performing card tricks and other brain teasers, and, later, penning books and studying the history of magic.

Mr. Smith-Johannsen showed onlookers the eight of hearts, which he had randomly chosen from the deck. The card was placed back into the deck, with the two joker cards faced upward.

How does the trick work? The volunteer places the chosen card back into the deck, while the two joker cards go face up, randomly, into the deck. After splitting the deck a couple of times, Mr. Smith-Johannsen’s eight of hearts mysteriously appears right in between the two “Almighty” jokers.

“I love to have the experience of being totally wowed,” he said while shuffling his deck of cards.

“I started doing magic when I was 7 years old. My parents bought me a magic kit, and I was hooked,” Mr. Kronzek said. “I loved the secrets, and the fantasy of power that goes along with magic.”

He said that, as a shy kid, he was encouraged by his parents to pursue magic, the outlet for a young Mr. Kronzek to express himself. His parents would even take him to the library to check out books on magic. “I kept practicing magic tricks,” he said, “and I got better and better.”

He grew up in Pittsburgh and, after high school, enrolled in the Carnegie Mellon University drama school, where he showed interest in film, screenwriting and theater.

After a year, having realized that Carnegie Mellon’s drama program wouldn’t aid him in becoming a film director, he transferred to Bard College in New York, where he chose instead to major in English. While in college, he put magic on the back burner.

After graduating from Bard, Mr. Kronzek moved to Hollywood to try to make it in the movie business. After a year of writing screenplays in Hollywood, he returned to New York and began studying jazz piano. He later moved to Sag Harbor in the early 1970s, married his first wife and began studying magic vigorously.

“That’s when I began performing more frequently and writing about magic,” he said.

Mr. Kronzek kept his magic to small parties, school workshops, and lectures. “I never wanted to be a showbiz magician in Vegas,” he said. His preferred venues for his magic act are libraries, schools and museums. Recently, he gave a lecture and performance at the Parrish Art Museum in Water Mill. He’s taught magic at the Ross School summer camp and does magic at parties and events.

“The hook for my show is the history of magic,” he added.

Thus far, he’s written six books relating to magic. He and his daughter, Elizabeth, wrote a guide to Harry Potter magic together, called “The Sorcerer’s Companion: A Guide to the Magical World of Harry Potter.” The book turned into a New York Times bestseller, has been translated into several different languages, and has sold more than 1 million copies worldwide.

This year, Mr. Kronzek released a sixth book, titled “Grandpa Magic.” The book is filled with illustrations with step-by-step instructions for card tricks, puzzle games and even how to levitate a cup. The book contains 116 easy tricks, brainteasers and simple stunts, including the “Just Say No” card trick, where the volunteer selects a card, returns it to the deck, and the magician finds it—but, how?

Mr. Kronzek said instead of the grandkids pulling out their cellphones, “Grandpa can pull out a pocket full of change and create a puzzle,” with tricks like the “Six Penny Stumper,” and the “Triangle Inversion Test”—both tricks just simply involving a few coins.

Everything in the book is meant to be done impromptu, Mr. Kronzek said. The reader doesn’t need prior expertise in magic to impress a crowd, he assured.

“For example, there’s a whole mess of things you can do with simple drinking straws,” he said before putting a black plastic straw up his nose, then somehow pulling it out of his mouth. “The idea of the book is to give grandparents a treasure chest of tricks they can pull out and wow the grandkids.”

With a smile, he added, “The best part about magic is seeing people’s reactions after a trick.”

Currently, Mr. Kronzek resides in Sag Harbor with his wife, Ruby Jackson, an artist, who previously worked at the Pollock-Krasner House in Springs. He continues to write, study and perform magic.