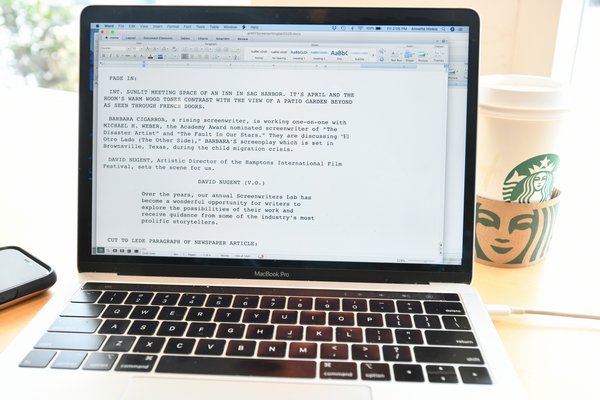 The story begins BY DANA SHAW 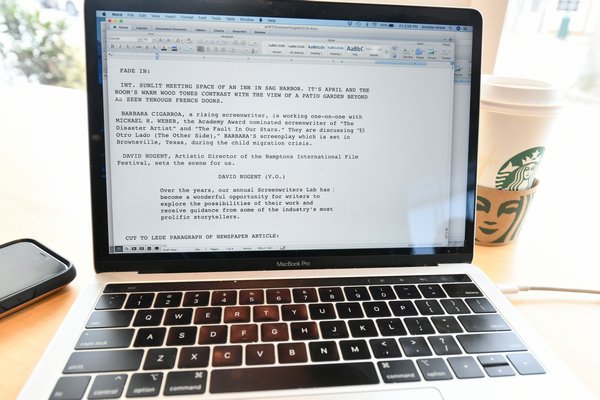 In the beginning ... BY DANA SHAW

INT. SUNLIT MEETING SPACE OF AN INN IN SAG HARBOR. IT’S APRIL AND THE ROOM’S WARM WOOD TONES CONTRAST WITH THE VIEW OF A PATIO GARDEN BEYOND AS SEEN THROUGH FRENCH DOORS.

BARBARA CIGARROA, a rising screenwriter, is working one-on-one with MICHAEL H. WEBER, the Academy Award nominated screenwriter of “The Disaster Artist” and “The Fault In Our Stars.” They are discussing “El Otro Lado (The Other Side),” BARBARA’S screenplay which is set in Brownsville, Texas, during the child migration crisis.

DAVID NUGENT, Artistic Director of the Hamptons International Film Festival, sets the scene for us.

Over the years, our annual Screenwriters Lab has become a wonderful opportunity for writers to explore the possibilities of their work and receive guidance from some of the industry’s most prolific storytellers.

Though the movie industry in general has a reputation for being both glamorous and exciting, the truth is, for screenwriters, the act of penning a script is typically a solitary pursuit that can lead to either great success or quiet frustration. Which is why for writers, being afforded the opportunity to dive into one’s work with an expert in the field can be an exhilarating and enlightening experience.

Each spring, the Hamptons International Film Festival (HIFF) does just that by pairing three emerging film writers with professional screenwriters for a weekend-long intensive workshop.

“For a screenwriter, if no producer is attached to the project they’re working in Starbucks or their living room,” explained Mr. Nugent when recently asked about the benefits of the program. “For them to be able to take the script and get feedback is invaluable.”

This is the 19th year for HIFF’s Screenwriters Lab, which runs April 5 to 7 at Baron’s Cove Inn in Sag Harbor. For the second year running, all three lab participants are women writers, and this year, all are women of color. Besides Ms. Cigarroa, they are Sontenish Myers whose screenplay “Stampede” is set on a southern plantation in the 1800s and follows a young slave girl who has telekinetic powers she cannot yet control, and Kirsten Tan with her screenplay “Higher” about a mysterious flood that rises floor by floor through an apartment building leaving residents fighting for survival and resources.

In addition to Mr. Weber, also working one-on-one with the lab participants will be Caroline Kaplan, producer of more than 70 films including “Sorry To Bother You” and “Boys Don’t Cry.”

“Each mentor gets to spend time with each writer. Beyond that, each of the writers read one another’s projects,” explained Mr. Nugent. “We eat meals together and there are both informal and formal mentoring sessions. A formal setting could be sitting at the table with scripts and pen in hand. Informally, sometimes a writer and a mentor might be walking on the beach and talking about approaching a script in a certain way.”

At the end of the lab weekend, Mr. Nugent moderates a discussion with the participants and mentors where everyone weighs in on all three scripts and brings up outstanding issues they feel might still exist with them.

“A couple of the writers will extend their stay,” he added. “It’s a very intense weekend of mentorship, at the end, the three writers will go home, sit down and work on what they heard in Sag Harbor.”

It’s not easy making the cut to be one of the three lab participants. The selection process begins in November when HIFF starts receiving hundreds of submissions from screenwriters across the country, all of whom are interested in taking part in the lab experience. Each screenplay is read by a group of readers who meet every two weeks to discuss the entries.

“Some advance and some don’t,” explained Mr. Nugent. “In four months, hundreds of submissions become 50, then 20, then 6 and finally 3 … and sometimes screenplays that aren’t accepted one year come back around again to make it a couple years later.”

Among lab participants who have gone on to find success with their projects is Sara Colangelo, writer and director of “Little Accidents,” which premiered at the 2014 Sundance Film Festival and starred Elizabeth Banks and Chloe Sevigny. Last year, “The Kindergarten Teacher,” which she also wrote and directed, also had its premiere at Sundance Film Festival and was quickly picked up for distribution by Netflix.

Though the chance to be a lab participant is limited and extremely competitive, aspiring East End screenwriters can still take part in the weekend by attending HIFF’s Master Class on Saturday, April 6, at the Ross School. The class is available to the wider public and this year will be led by two powerhouses in the world of film—husband and wife screenwriters Jim Taylor (who won an Oscar for Best Adapted Screenplay for “Sideways”) and Tamara Jenkins (nominated for an Academy Award for Best Original Screenplay for her film “The Savages” she also wrote the semi-autobiographical film “Slums of Beverly Hills”).

The couple worked together recently on “Juliet, Naked” and last week, shared their plans for the HIFF session via a phone interview from their home in New York City.

“We don’t like to lock down too much,” said Mr. Taylor about the content of the Master Class. “We’ll bring some clips to demonstrate a few things. It’s sort of nice to find out who’s there and what they’re most concerned about. Are they doing adaptations or writing from personal experience? We can talk about anything, but generally we’ll want to tailor it to who’s in the room.”

When it comes to defining what makes for a good film script, finding the right balance between craft and creativity is key. While the method of teaching screenplay writing has traditionally been governed by certain accepted technical rules and guidelines for topics like character development and structure, truly innovative writers know when it’s time to throw much of that criteria out the window in favor of creativity.

“As interesting as a lot of those screenwriting rules are there’s also an understanding that every time I write something, I figure out if those rules are really necessary,” said Ms. Jenkins, a New York University film school alumna who also teaches screenwriting there. “Not that I’m that experimental, but you don’t have to listen to all of that … but then again, you do.

“In my class, I see my students’ films and I think there’s a tension between screenplay standards and traditional structure versus finding your way through it and not being oppressed,” added Ms. Jenkins. “Historically, there’s always people breaking out of the straight jacket and pushing against the established ideas of what’s acceptable.”

Streaming is all the rage now. When asked if services like Netflix and Hulu are having an impact on the volume and types of screenplays that are making it to production, Ms. Jenkins concedes that with more available venues, more films are, indeed, being produced.

“I just made a movie for Netflix, so I’m waking up to that. Does this create a kind of hierarchy? If it’s a theatrical release, is it more of a movie than if it’s on the streaming services?” she asked. “There’s all sorts of drama going on about that. The great thing about the streaming services is that people who are less empowered can make things. There’s more room for people to make films than there used to be and these platforms are less cumbersome in terms of marketing and distribution.

“Do they get seen? Maybe,” she added. “On the other hand, when Jim and I got out of film school there was not anywhere near the opportunities to make something.”

Mr. Taylor counters by noting that amongst his generation of screenwriting friends, everyone’s first dream is still for a theatrical release of their movie.

“My peers are also my age and have a different relationship to film,” he noted.

Regardless of whether a script ends up being produced for Netflix or the big screen, Ms. Jenkins believes that the plethora of new outlets in the industry has opened up the opportunities for a new generation of talent. And that, she argues, is a good thing no matter how you look at it.

“You are totally hearing different voices, women, people of color and people who are not white men,” she said. “Definitely things are happening.”

The Master Class with Jim Taylor and Tamara Jenkins will take place at 6 p.m. on Saturday, April 6, at the Ross School in East Hampton.

Also on Friday, April 5, during lab weekend, HIFF will present a special screening of the 1983 film “Terms of Endearment” at Bay Street Theater in Sag Harbor with a post-screening conversation between David Nugent and Alec Baldwin. Tickets for the Master Class or the film screening are $25 at hamptonsfilmfest.org.