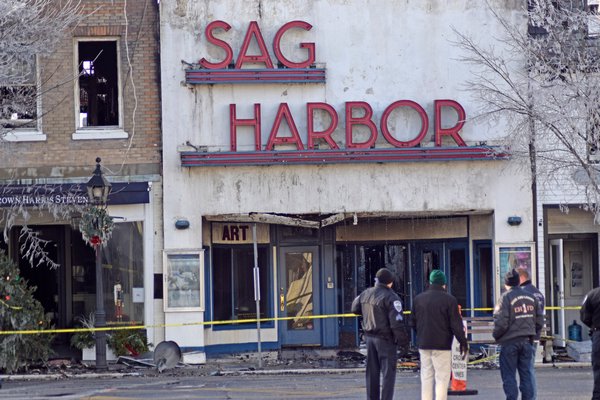 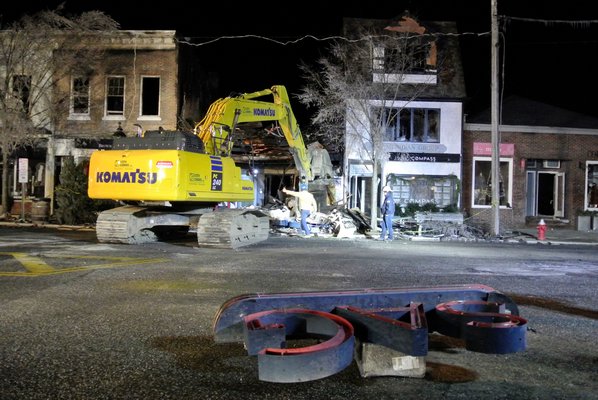 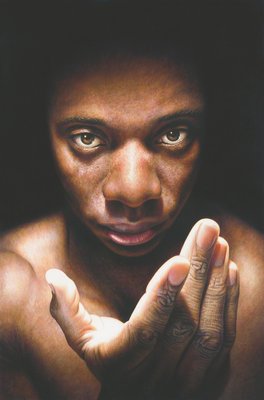 The fire that erupted on Sag Harbor’s Main Street in the early hours of December 16, 2016, had a staggering impact on the community, destroying numerous businesses. Believed to have been sparked in the outdoor space of an attached residence, high winds then carried the fire to neighboring buildings.

Among the storefronts lost in the fire was the RJD Fine Arts Gallery, which shared a building with the Sag Harbor Cinema. The gallery showcased portraiture and contemporary landscapes from both emerging and established artists.

Owner Richard Demato arrived in Sag Harbor in 2003 via New York City and established his gallery shortly thereafter. At the time of the fire, the gallery was showing the group exhibition “Pieces of My Soul,” featuring the work of Armando Valero, Margo Selski, Rachel Moseley, Alexander Klingspor and Frank Oriti, and many other artworks were stored there.

The gallery determined that 83 works of art, collectively worth $1.2 million, were lost in the fire. Twenty-four artists lost original works—some lost several pieces.

“We had an artist named Jesse Lane who had an exhibit running,” gallery director Eve Gianni Corio said. “We had five of his pieces up.”

Mr. Lane’s exhibition of colored pencil portraits, “Face Reality,” was originally scheduled to conclude in November but had been extended into December.

Not all losses were of original artwork, though the majority were. One of the gallery’s more sought after artists, Andrea Kowch, lost both a series of prints as well as one original.

“Ninety-five percent of what we do is original, one-of-a-kind pieces. There are only two artists that we represent that we do prints for,” Ms. Gianni Corio said, due, in large part, to those artists’ popularity.

The gallery’s other losses, including a mural against the back wall, are simply, as Ms. Gianni Corio put it, “irreplaceable—a devastating loss.” But the gallery’s artists are “emerging artists and are still working today,” she clarified.

“Unfortunately, I had five works of mine lost in the fire: three oil paintings and two ink paintings on paper,” said artist Candice Bohannon, who specializes in contemporary realism. Ms. Bohannon, who has been represented by RJD for just over a year, has had some impressive success with the gallery, despite the losses sustained in the fire. Of the nine works of hers that the gallery had shown, two sold, two were stored in another location, and five were destroyed.

“A measure of my life’s work has been ripped from this world, and I feel sick to my stomach thinking about it,” Ms. Bohannon said. “But the feelings of loss are reshaping into a sharp sense of urgency—urgency to create new works of great importance, passion, intention and beauty, and to fill the void that this horrible fire has left in its wake.”

Ms. Gianni Corio echoed this sentiment, intimating that the tragedy of the fire had incentivized some of the gallery’s artists to create even more new work. And when they do, the gallery is ready: She revealed Monday that RJD Gallery has secured a new location—it will open in Bridgehampton in March.

Mr. Demato has informed his artists that their work is fully insured by Lloyd’s of London; the insurance company did not respond to requests for information. Art insurers do not differentiate between prints and original work, merely assessing the values differently.

“Art owned or held by galleries is rarely formally appraised. Instead, the galleries typically have a strong sense of the ‘market value’ of the works they are selling, so appraisals are not necessary,” said Jennifer M. Schipf, a senior vice president at fine art insurer XL Catlin. “Values [of unsold work] are determined by using similar, recently sold items as a reference and various resources—auction houses, other galleries, etc.—are used to come to a final determination.”

In the event of a major catastrophe, like a fire, insurers assign either their own or independent adjusters to assess the damage. “Once values are determined, we work closely with our clients to determine a fair settlement, which makes them whole for the loss they sustained,” Ms. Schipf said. According to Ms. Schipf, many galleries do not offer insurance for all of the work held on their property. In this sense, Mr. Demato’s artists were fortunate.

In addition to the original artwork, the gallery lost its hard drive, which contained countless images. The value of these has not yet been determined. Mr. Demato maintains a separate space, where he stores additional works of art. The space is “sizable” with work that is “still available.”

Some artists were spared losses. Italian artist Salvatore Alessi, who has been represented by RJD for the past year, had no work on exhibit at the time of the fire. “I will be in the next show,” he said, looking toward the future, though he did not indicate when this show was scheduled to take place. “I lost no work, so I’ve been blessed, and I’m excited to be in the first show at the new gallery space.”

“People have been amazing,” Ms. Gianni Corio said. “The outpouring of support from the community has been amazing … Our ultimate goal is to open again. We want to open. We’re ready to go.”