‘My Life Is A Musical’ Is Two Hours Of Hilarity 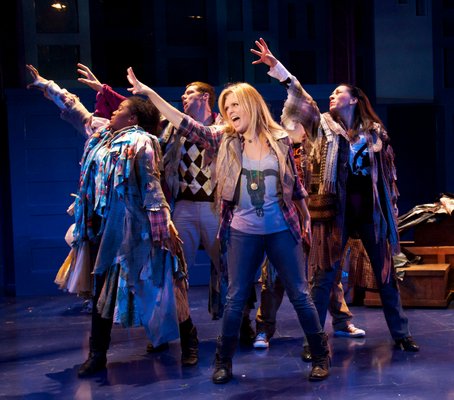 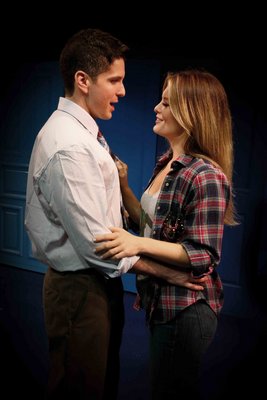 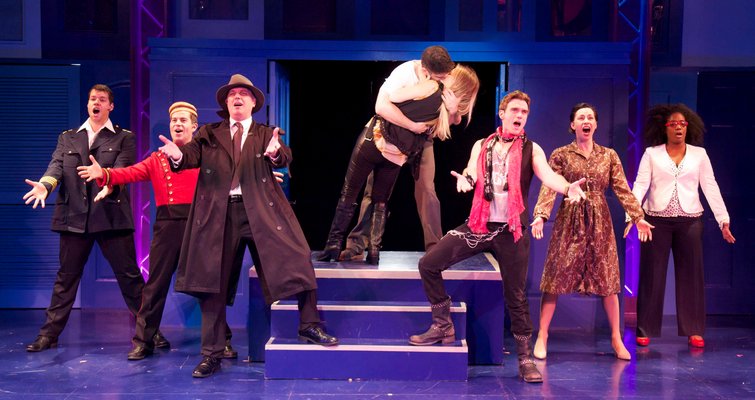 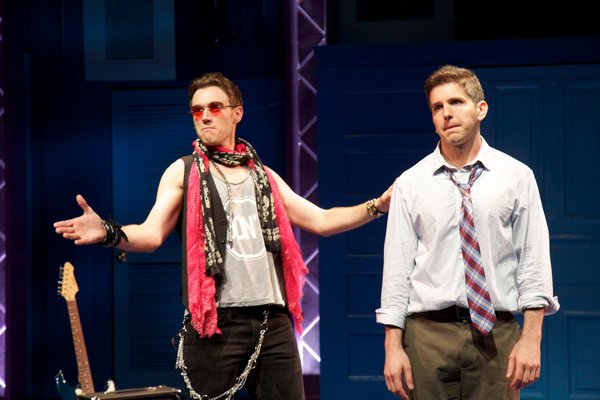 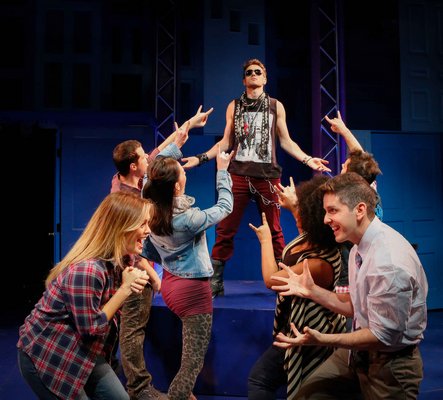 You will walk away from “My Life is a Musical” chuckling over the pile of extremely clever rhymes embedded in the lyrics and dialogue, wishing you could remember some of them to amuse and amaze your friends—“What did Connie Chung rhyme with? Or husband Maury? Randy or Sandy—something better than dandy! What’s low-fat margarine again?”

You’re going to have to find out for yourself. This writer dude is not imbued with the mental food to recall every joke written by the talented bloke that is Adam Overett. This young musical-comedy mastermind wrote book/music and lyrics for this world premiere of a delightfully silly play that will lift your mood with its infectious good humor and wit. Marlo Hunter brightly directs “My Life is a Musical,” the last of the summer productions for Bay Street Theater’s Main Stage in Sag Harbor.

It is the story of a young man, Parker, who hears nearly everything in song and wishes he didn’t—until he is recruited to be the dorky company accountant for a struggling rock band named Zeitgeist.

Zeitgeist has one of those sexy, skinny, cool, airhead singers—Zach—whom JT, the beautiful blonde band manager, secretly loves. Trouble is, Zeitgeist sucks and Zach can’t write a song worth a damn until Parker starts giving him the lines on the down-low: the lyrics he hears the people around him singing.

Acclaim and fame come next.

Of course, this being the current time, the most influential blogger of the music blogosphere suspects something is afoul and is determined to get to the truth. Enter Randy, portrayed by big, beefy, trench-coated, fedora-wearing Robert Cuccioli to absolute zany perfection.

He’s a spoof of every spy character familiar to audiences. Mr. Cuccioli appears as a bearded blogger with a Russian accent, a suave James Bond—or was that Frank Sinatra, with cigarette?—the Pink Panther, an old man with a limp, and other incarnations too numerable to list (and remember, if truth be told). No matter, Mr. Cuccioli is a hoot with a deep, rich baritone and enough wicked stage presence to steal every scene he’s in.

Howie Michael Smith as the lead, Parker, is agreeably befuddled by his predicament of hearing music everywhere and longs for “Perfect Silence,” one of the few somber tunes in the oeuvre. Mr. Smith, who starred as the dual roles of Princeton/Rod in “Avenue Q” on Broadway, is best when paired with JT, performed and sung by Kathleen Elizabeth Monteleone. Her joy and electricity brighten all her numbers. The best comes in the first act, “Someone Else’s Song,” performed with the nimble, quick-as-lightening ensemble of four—each of whom plays more parts than fingers on both hands.

Justin Matthew Sargent is Zach, the inane rocker she loves, and he is brilliant as the dim-witted and nearly out-of-it doofus every moment he’s on stage. One of his “original” lyrics: “My love is like a penguin …” Mr. Sargent happily milks the role, for he not only sings, but also brings his rich physical ability to Zach. Mr. Sargent was Spiderman in “Spiderman—Turn off the Dark” for the last several months of the production’s run on Broadway. Mr. Cuccioli is another veteran of “Spiderman.” Surely he played some bad guy.

There is actually little dialogue between the songs—that’s the point for Parker, isn’t it?—but it’s often just as ingeniously funny and poetic as the non-stop rhyming lyrics. Both the muses of comedy and lyric poetry bestowed gifts on Mr. Overett. Watch for more from him.

The latter is a hilarious montage of various modes of transportation—plane, cab, boat, raft, bus, bicycle, children’s carnival rides—as Parker races cross country to redeem himself and claim JT. It’s almost unbelievable that the cast can change costumes as fast as they do and get themselves attached to some new mode of transportation that comes flying across the stage lickety-split before the next one does. They are only four in the antic, energetic ensemble—Brian Sills, Adam Daveline, Danyel Fulton and Wendi Bergamini—but they act like 10.

While it’s the lyrics you will try to remember, what you will not come away with is a tune that reverberates in the morning. No matter. The production at Bay Street is two-plus hours of hilarity. “Go!,” as the song says. You will leave laughing.

“My Life Is a Musical” stages Tuesdays to Sundays, through August 31, at Bay Street Theater in Sag Harbor. Performances are Tuesdays at 7 p.m.; Wednesdays at 2 and 8 p.m.; Thursdays, Fridays and Saturdays at 8 p.m; and Sundays at 2 and 7 p.m. Tickets start at $62.55. For more information, call 725-9500 or visit baystreet.org.