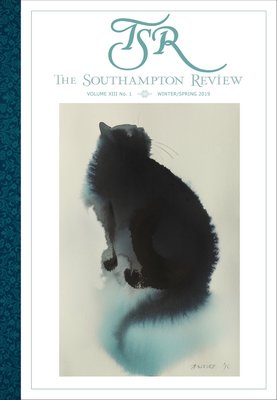 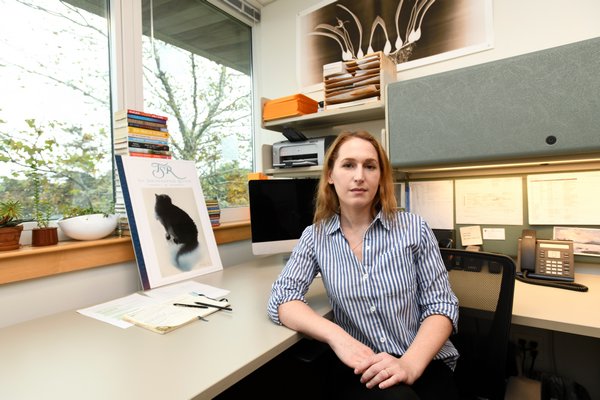 On November 16, the Winter/Spring 2019 edition of The Southampton Review was launched at an event at Stony Brook Southampton’s Manhattan Center for Creative Writing and Film. When fans of the much-beloved publication get their hands on the new issue, they may notice that it comes with a slightly different look and feel than past editions. That’s because the highly regarded literary guide has a new editor-in-chief at the helm, Amagansett resident Emily Smith Gilbert, and, already, she has added her touch to the layout.

“I changed the font, I lowered the page count and made the interior margins slightly larger, so there’s more white space,” explained Ms. Gilbert as she talked shop during a recent interview in her office located within the Master of Fine Arts in Creative Writing program at the Stony Brook Southampton campus. “The leading is a hair’s breadth bigger, so there’s less text on the page to make it more readable.”

This may be inside baseball to many, perhaps, but it’s all in a day’s work for Ms. Gilbert, who takes over the position from founding Editor-in-Chief Lou Ann Walker. A New Hampshire native, Ms. Gilbert moved to the East End in 2009 to be near her now-husband, Steve Trunzo. She earned her MFA in writing at Stony Brook Southampton back in December 2015 and first worked on TSR as an editorial assistant for the Spring 2014 edition while enrolled in the program’s Practicum in Publishing and Editing.

“I made sure I was indispensable, because I loved editing this,” Ms. Gilbert said, adding that because she was a year-round resident she was able to stay on through the summer and work alongside Ms. Walker and then Fiction Editor Susan Scarf Merrell. In 2016, Ms. Gilbert became a contributing editor and was named managing editor for the Summer/Fall 2017 edition.

“As managing editor, I was pretty much doing everything I do now. Lou Ann did the majority of the solicitation. She found student work,” she said. “We also have dedicated fiction and poetry editors—they go get a lot of work.”

“We also have Ana Daniel, our special projects editor, who helps curate our art collection, most of which is solicited,” Ms. Gilbert added.

Highlights of the Winter/Spring 2019 edition of The Southampton Review include pieces by winners of the TSR Short Short Fiction Prize—Tara Isabel Zambrano, Annie Raab and Karen Smyte. Also included is poetry by Michelle Whittaker and Billy Collins, fiction by Cally Fiedorek and April Bernard, and lots of art, photography and cartoons.

“We have two contests—the Frank McCourt Memoir Prize, which shows up in the Summer/Fall issue, and the Short Short Fiction Contest in the Winter/Spring issue,” Ms. Gilbert said. “Contests were a thing that happened since I’ve been here and they help gain exposure because you get listed in other publications. The Short Short Fiction Contest is 350 words or fewer. Because nonfiction gets the fewest submissions, the McCourt Prize has been a way to get essays.”

In addition to the subtle changes that have been made to the print edition of the literary guide, another big change with Ms. Gilbert at the helm is the new and improved TSR website. She described the previous incarnation as a simple landing page with a table of contents, excerpts of pieces from the latest guide and biographical information about the staff members who worked on the review.

By contrast, the new TSR Online is designed for the digital age to raise the visibility of the publication and increase interaction, reflecting the way in which publishing has changed across the board in recent years. Lots of new and frequently updated content is key.

“When I started, our website was different and smaller in scope,” explained Ms. Gilbert who, in 2017, wrote a grant to fund the redesign of it. The grant came from the Community of Literary Magazines and Presses and facilitated the hiring of a consultant to rework TSR’s online presence.

“We knew we wanted the website to be more functional, reader friendly, and work as a promotional tool for us and a place people would visit regularly,” Ms. Gilbert said. “Authors want their work to be published online. Once a week, we put up new TSR material. Sometimes, it’s a TSR classic, an older piece from an early review.”

Ms. Gilbert adds that having vibrant, unique online content separate from the print edition is something that pretty much all literary guides, including the Kenyon Review and The Paris Review, are doing these days in order to stay competitive. “It’s a necessary part to maintain what it needs to be as a literary journal now,” she said. “It’s great if people buy an issue—that’s preferred. But we’re publishing this review not to make money, but for the authors.”

For that reason, the online version is ultimately going to reach a much broader audience than the print product, so Ms. Gilbert has lowered the print run of the literary guide from 1,200 to 800 copies. With lots of back issues still in storage, the website has also become a marketplace for those earlier editions.

“Now TSR Online also has an archive of all our previous issues, so people can buy it online,” she said. “I think people are buying back issues, because they can now see we have things like Billy Collins’s poetry. There’s also a dedicated news page so publishers can get in touch.”

The global nature of the internet means that, as editor-in-chief, Ms. Gilbert also has the ability to cast a wide net indeed in terms of obtaining content for future editions of TSR.

“We get submissions from all over the world. There are authors I absolutely love—some well known, some not—and I want to get their work,” Ms. Gilbert said, pointing specifically to Emily Fridlund, author of “History of Wolves.” “I just cold-email people and ask them to think of us if they have something short.”

Publishing equity is another consideration, and Ms. Gilbert is striving to ensure that issues of race, gender and diversity are all well represented going forward.

“Given a piece of writing is good, forefront in my mind is, what are the ethical considerations in publishing something? What would the publication of this story bring to the conversation?

“That’s where social media is useful. In following people of color or LGBTQ people on social media, we can see their discussions on what’s being published,” Ms. Gilbert said. “There are so many MFA programs out there and a good portion of them do reviews. … We’re just looking for good stuff.”