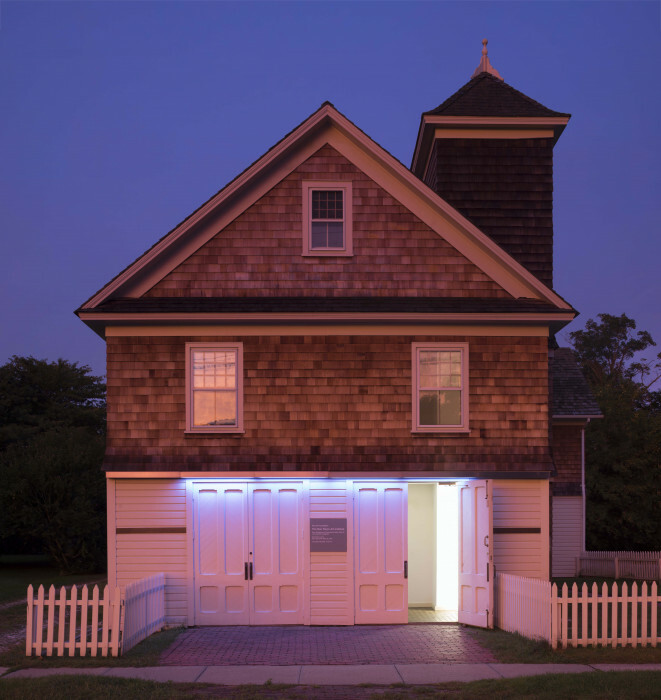 Dia presents a new body of work by Leslie Hewitt conceived for Dia Bridgehampton. The exhibition, curated y Matilde Guidelli-Guidi, opens June 24, and will be on view through June 5, 2023. Exploring ideas of light, sound, and inertia, Hewitt has realized an array of low-profile sculptures that are laterally distributed within and outside the gallery, as well as a performance score composed in collaboration with artist Jamal Cyrus. Invited musicians Rashida Bumbray-Shabazz, Jason Moran, and Immanuel Wilkins will respond to the score at venues in New York City and on the East End throughout the yearlong run of the show. Collectively the sculptures in situ, the score, and the distributed performances form a counter-archive that puts forth an alternative corporeal, spatial and sonic mapping of Dia Bridgehampton.

“These new works by Hewitt extend Dia Bridgehampton’s long-standing engagement with the histories of its immediate site and surrounding geographies,” said Jessica Morgan, Dia’s Nathalie de Gunzburg Director. “With remarkable restraint, Hewitt simultaneously evokes the vastness of the landscape as well as the ways in which histories are made through the ebb and flow of day-to-day life over time.”

Hewitt’s approach to photography and sculpture reimagines the art-historical still-life genre from a Postminimal perspective. Inside the gallery, three bronze sculptures reference the bodies of water on the East End, namely, the Mecox, Peconic, and Shinnecock Bays. A fourth sculpture is installed on the lawn outside the gallery. On a locally sourced boulder — formed, like the bays, by the interplay of sand and water over epochs — lies a matte bronze silhouette pointing at the sky.

A lecture by scholar Tiffany Lethabo King will take place in conjunction with the exhibition. More information on the performances and the lecture will be announced soon.

Established by Dia Art Foundation in 1983, Dia Bridgehampton was designed by Dan Flavin to house an installation of his work alongside temporary exhibitions. Flavin’s nine fluorescent light sculptures, created between 1963 and 1981, will be on view on the second floor. Dia Bridgehampton is at 23 Corwith Avenue in Bridgehampton. Admission is free. Visit diaart.org for details.