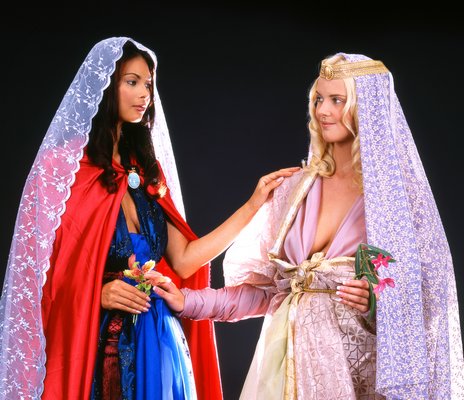 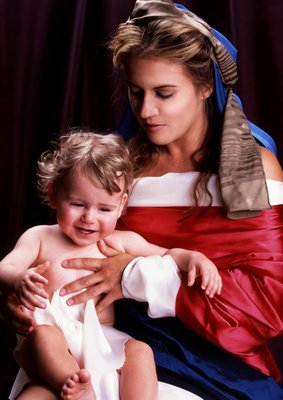 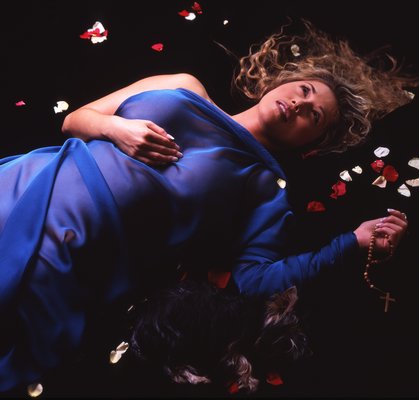 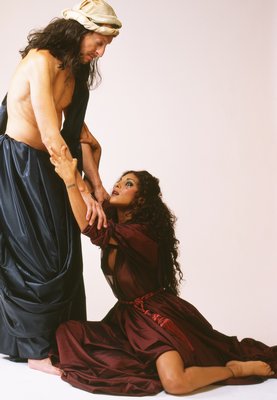 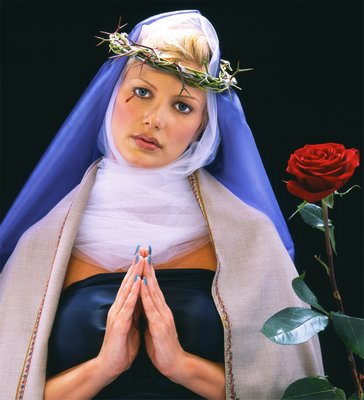 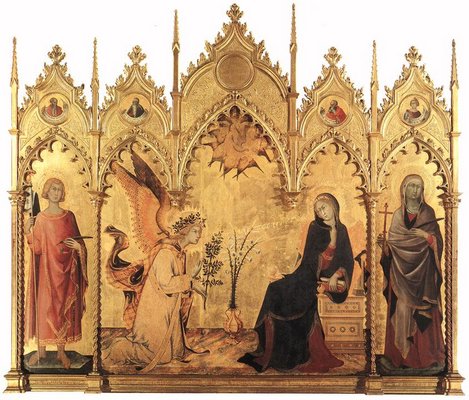 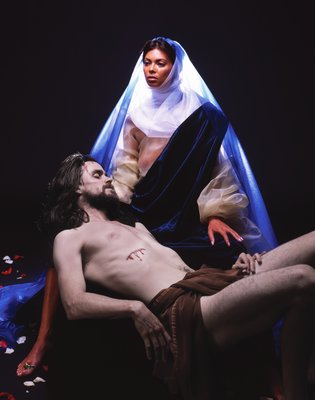 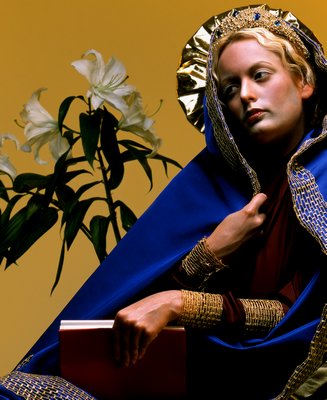 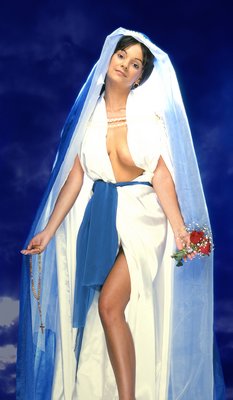 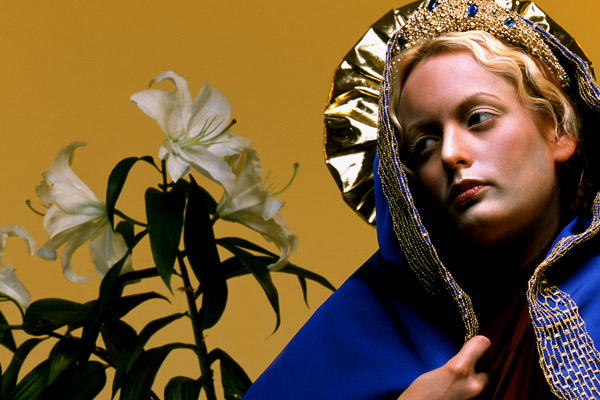 Amagansett artist Nika Nesgoda had no intention of pursuing the limelight with her photographic project. After all, the series, in which she used adult film actresses to re-create 15 Renaissance-era religious paintings, many of them depicting the Virgin Mary, is now 16 years old.

“I’ve moved on,” explained Ms. Nesgoda over a recent cup of coffee in an Amagansett café.

Today, the mother of three is a graduate student working toward a degree in arts education at Columbia University. She’s also taken up the cello.

But earlier this year, it came to light that one of the models in “Virgin,” that long-ago series that Ms. Nesgoda shot in Los Angeles, was an unknown actress from Louisiana who was new to town and looking to make her way in the adult film industry.

That young woman is unknown no more. Stephanie Clifford, aka Stormy Daniels, is now at the center of a political firestorm over her alleged 2006 affair with President Donald Trump and the subsequent 2016 payoff from his lawyer Michael Cohen—currently under investigation by federal prosecutors—to not speak publicly about the affair.

“I kept hearing the name and thought it can’t be the same woman,” she added. “Then I saw the picture—and it was her. I told a couple people who said, ‘You have to show this to someone.’ I said, ‘No way, I’m not getting on the circus train.’”

But after a friend shared the images with Paul Moakley, the deputy photo editor of Time, there was no stopping that train, and in early May, eight images from the series were published on the magazine’s website alongside the original paintings on which they were based.

“It’s been an odd mix of calls since then,” Ms. Nesgoda said, “including the Wall Street Journal.”

While both the original photographic project and the more recent revelation of Stormy Daniels’s participation in it have sparked controversy, Ms. Nesgoda explained that the goal of the “Virgin” series was not to be provocative, but rather explore the role of real women in these most religious of images. For her, the series was an outgrowth of the Catholic faith in which she was raised.

“I would say I’m very spiritual. My parents were raised in heavy Roman Catholic families and broke out into an exploration of alternative forms of spirituality,” Ms. Nesgoda said. “I grew up Catholic and saw negative and positive aspects of the church.”

One of the images included in the series is based on the 14th century Titian painting “Noli me tangere,” which depicts the story from the Gospel of St. John in which Mary Magdalene encounters Jesus after his resurrection. The title translates to “touch me not,” which Ms. Nesgoda finds to be an apt metaphor for the fact that her models operate on the edges of acceptable society because of their chosen profession.

“When working on this, I had Catholic guilt, so I went to speak with a Jesuit priest and a nun I knew,” she said. “I asked if it was okay for me to do this. They said we are all human and everyone strays from the path, no one is without sin, and these women are worthy.”

While it may seem like a modern construct, Ms. Nesgoda’s idea for the “Virgin” series actually began with the artist Caravaggio, whose painting “The Death of the Virgin” caused an uproar early in the 17th century, because he purportedly used his mistress, a prostitute, as his model. The painting was rejected by the Roman parish that commissioned it, and for years it was rarely shown in public.

Today, it is in the Louvre in Paris.

“I found that a lot of the artists and their models lived on the fringe of society,” Ms. Nesgoda said. “The models they hung out with oftentimes were women who would’ve been scorned in society. They had alternative lifestyles and wouldn’t have been invited to the unveiling of the paintings they were in.

“I thought it was really interesting,” she added. “I didn’t have a lot of anger about my background, but I thought, ‘Let’s try this, it’s fun.’”

This was 2002 and the internet was still in its infancy at the time, so Ms. Nesgoda grabbed a bunch of art books, jumped on a plane to Los Angeles and obtained the use of an old abandoned Hollywood penthouse that was slated to soon be torn down.

Ms. Nesgoda found that many of the women also came from religious backgrounds and felt that what they were doing was not wrong.

“It was like a performance. This was not sinful to them, they were free spirits,” she said. “I know some women are victimized in the adult film industry, and I’m sure lots of bad things happen. But the women I met were empowered in what they were doing. They were happy, confident, and didn’t feel taken advantage of.”

In advance of the shoots, Ms. Nesgoda said she first met with all the women who had agreed to pose for her, with one notable exception: Stormy Daniels.

“I didn’t have her on my book. She came with the makeup artist, who said she’s new and really great,” Ms. Nesgoda said. “She was fresh. She had just come from Louisiana and kind of had an accent. I wouldn’t say she was shy but kind of reserved. She seemed very intelligent, taking it in, was very professional and easy to work with.”

The painting that Ms. Daniels re-created in Ms. Nesgoda’s photograph is the “Annunciation with St. Margaret and St. Ansanus,” a 1333 altar painting by Simone Martini and Lippo Memmi. Originally installed at the Siena Cathedral in Italy, the painting now resides in Florence’s Uffizi Gallery.

“I loved it, because the Virgin Mary in that painting had an expression that was a little reluctant, like she was sizing up the situation,” Ms. Nesgoda said. “She didn’t look like an empty-headed virgin.”

As for Stormy Daniels’s performance in the photo, Ms. Nesgoda added, “Every shot, she nailed the expression.”

But that was then, and 16 years is a long time in the life of an artist. Ms. Negoda has since moved on by pursuing other interests in her photographic work, which has become more abstract in nature.

“I left this behind, because it was something like a catharsis. It was fun, but also something I just had to do,” she said. “As time went on, it was a tough sell. It was considered controversial. It’s edgy and not for everyone and more like a critical appraisal of the world—pushing out the boundaries of the comfort zone in a way.”

Though Ms. Nesgoda has been reluctant to revisit the “Virgin” series in the face of the recent publicity, she remained open to the idea of an exhibition in the right setting, with the caveat that the proceeds of any sales of the work go to an appropriate charitable organization.

That opportunity presented itself with Eve Gianni Corio and Beth McNeill of McNeill Art Group, who are curating an exhibition of the work in August. “Virgin” will be on view at The Spur, a converted 19th-century red brick barn at 280 Elm Street in Southampton that now functions as a co-working space and innovation club for entrepreneurs on the East End.

Proceeds from the exhibition will benefit the Neo-Political Cowgirls, a local nonprofit organization dedicated to empowering women and girls through dance theater.

In addition, Ms. Nesgoda’s latest works, “Landscrapes,” which are large-format images that explore the texture and nature of tiny objects through close-up photography, are on view in a salon-style group exhibition being held at a private venue in Sag Harbor. Titled “Frankenstein,” the show opened July 28 and is curated by Peter Dayton and Turid Meeker. It explores the conflicted relationship that artists have with their own work and the concept is based on the writings of Mary Wollstonecraft Shelley in her novel “Frankenstein.”

For more details and invitation to visit “Frankenstein,” contact Peter Dayton at peter@peterdayton.com.