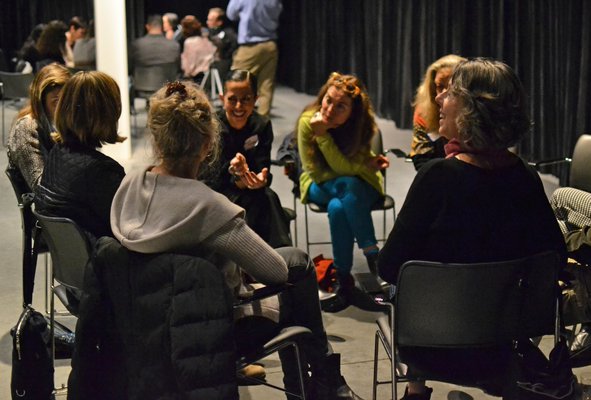 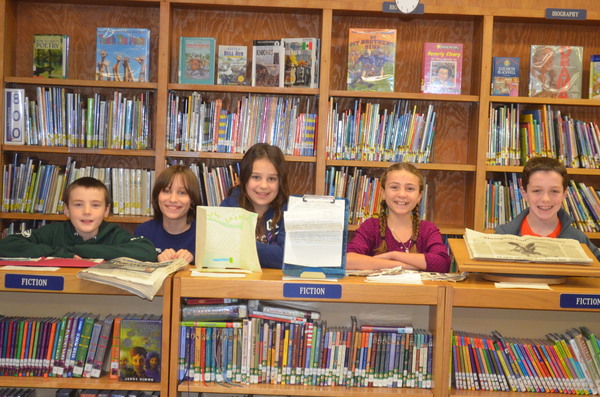 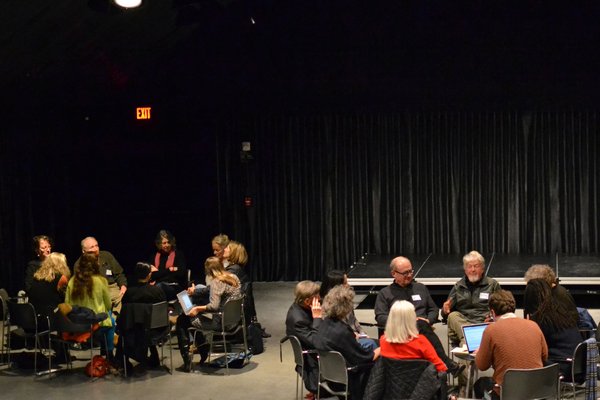 Friday at the Parrish Art Museum, local residents attending the People’s State of the Union Story Circle will break off into small groups, each with a notetaker and poets.

Sitting in a circle, one by one, the participants will share with their group a two-minute story that speaks to the state of the nation. A facilitator will open up 15 minutes of conversation, the groups will break for refreshments and mingling, and then they will reconvene for another round of storytelling.

“They come back to the same circle because we have seen that people open up much more in the second round,” explained Corinne Erni, the Parrish Art Museum’s curator of special projects. “And they have built trust within that circle, so we don’t want to mix people up at that point.”

Ms. Erni first brought the Story Circle to the museum in 2017. East End residents from all walks of life were invited to participate.

“I was just really surprised at how moved people were,” she recalled. “I would say almost moved to tears when people heard other people’s stories, and it triggered something in them—maybe memories or they could relate to something. And it was just amazing how people can get connected who maybe have nothing in common at first sight.”

Ms. Erni said a wide variety of people who live on the East End year-round took part, from artists and educators to businesspeople.

“We had also people from different communities,” she added. “We were really trying to bring together people who usually wouldn’t come to the museum. That would include people from the Latino community—we had translators who helped people who didn’t speak English. It was quite a varied group and I’m hoping for an even more varied group this time. I’m just really keen to bring very different voices together.

“I feel we live in a very polarized time,” Ms. Erni continued. “Even within families, I’ve heard that people don’t even share their thoughts anymore because politics has entered their private life. So people are being very guarded.

“It’s really a nice way to bring people together and I think [sharing] stories is the best way to feeling at ease with somebody. Because you can relate to stories. So it’s not about telling your opinion. It’s really telling about your personal experiences. And we’re focusing on people’s personal experiences of moments when they have experienced something that gave them insight to the state of our union, or when they felt a sense of belonging—or the opposite—to this nation. Stories where maybe they broke a barrier to connect with somebody that is different from them, or with whom they may have disagreed. Or about someone who had maybe a prejudice or a certain opinion, and then once they started engaging that changed their mind. We’re really asking people to tell stories and not opinions.”

Notetakers will record stories to submit to the U.S. Department of Arts and Culture, which conceived the People’s State of the Union.

Despite what the name may sound like, the U.S. Department of Arts and Culture is not actually a government agency. It is a grassroots action network with a stated mission to incite “creativity and social imagination to shape a culture of empathy, equity, and belonging.”

USDAC hosted the first People’s State of the Union in 2015 as a supplement to the president’s annual State of the Union Address to Congress. USDAC offers training, a toolkit and story prompt suggestions, so any group or institution can host its own Story Circle. This year, Story Circles will be held nationally between January 25 and February 4. Based on the stories shared across the country, poets will compose poems to be read during USDAC’s annual Poetic Address on April 15.

Ms. Black, who lives in Sag Harbor and Manhattan, also took part in last year’s Story Circle at the Parrish.

“I found it very a novel experience and a good idea, which was coming and sitting in a circle of diverse people and talking about what we’ve been absorbing on our own from the news and from our communities,” Ms. Black said this week.

Based on her Story Circle experience and her experience of attending the 2017 presidential inauguration and the first Women’s March in Washington, D.C., the next day, Ms. Black wrote a sequence of poems.

“It’s not always possible to just go home and write poems, but last year I was able to do that,” she said. “Several poems I wrote came out of my experience in the Story Circle and being invited as a poet.”

She said that, though did not know anyone in her circle well, the Story Circle was gentle and forthcoming. “So you felt relaxed and you felt the people there were listening, and you were listening.”

Mr. Blagg, another returning poet, wrote a poem titled “Keep the Change” for the 2017 Poetry Night at the Parrish.

He wrote, in part: “I want to believe what the poet said / ‘what thou lovest well remains American’ / an America of inventors and explorers, / artists and adventurers; Jackson Pollock conjuring pure beauty on canvas / with Duco house paint and a wooden stick, / Chuck Yeager punching a hole in gravity / in his tiny, tinny airplane, / Neil Armstrong walking on the moon, / Martin Luther King speaking truth to power / asking only that all men be considered equal / but that was too much to ask fifty years ago / and so they killed him …”

Admission to the Story Circle at the Parrish Art Museum in Water Mill on Friday, January 26, at 6 p.m. is free. Advance registration is required. Visit parrishart.org to register. Anyone age 15 and older is welcome. No preparation is necessary. Poetry Night will be Friday, March 23, at 6 p.m., free with museum admission, and completely free for those who participated in Story Circle.