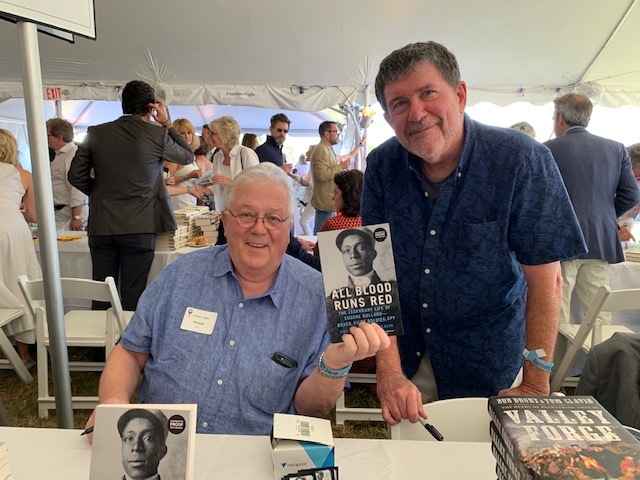 Phil Keith and Tom Clavin at a book fair in 2020 with their book "All Blood Runs Red." LAURA LYONS 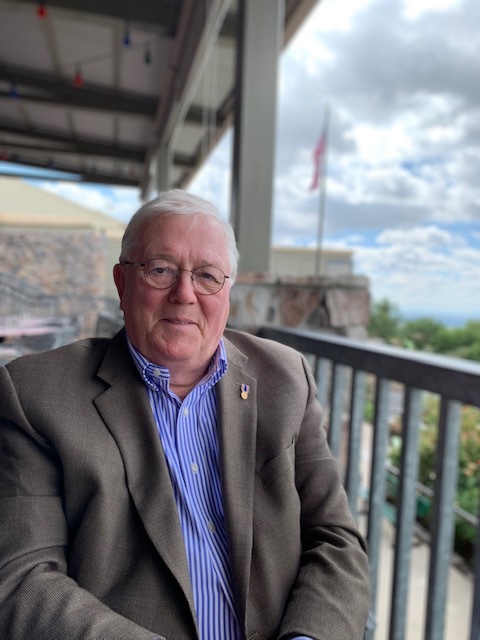 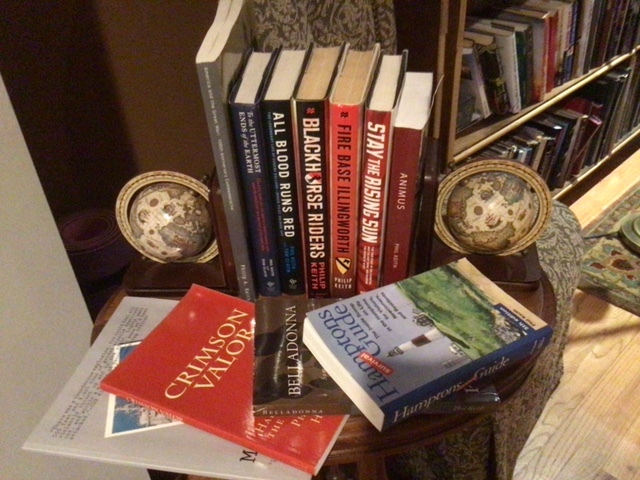 A collection of the many books authored by Phil Keith. LAURA LYONS 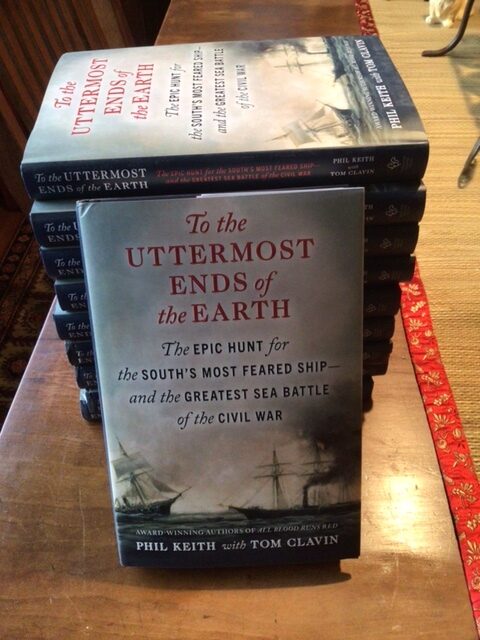 "To The Uttermost Ends of the Earth," Phil Keith and Tom Clavin's newest book, was published after Keith's death. LAURA LYONS 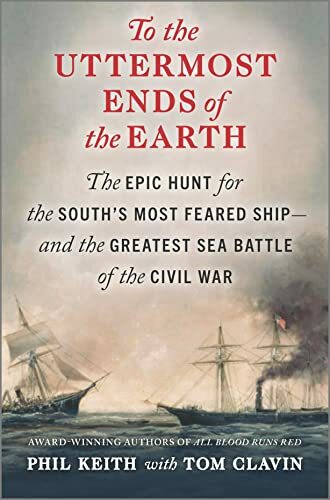 "To the Uttermost Ends of the Earth," co-written with Tom Clavin, is Phil Keith's final book.

On April 12, the latest book by East End authors Phil Keith and Tom Clavin was officially released, and it’s now available at bookstores large and small across the country.

Published by Hanover Square Press and titled “To the Uttermost Ends of the Earth: The Epic Hunt for the South’s Most Feared Ship — and the Greatest Sea Battle of the Civil War,” the nonfiction book tells the true tale of the Confederate raider Alabama, captained by Raphael Semmes, which, for more than a year, was pursued around the globe by the Union warship Kearsarge helmed by John Winslow.

The Confederate and Union ships finally faced off in a major battle in 1864. This battle occurred not off the East Coast of the United States, but rather in the waters off France’s northern coast. It’s a harrowing tale filled with lots of intrigue and high seas drama, and while Clavin is now making the rounds at libraries on the East End giving talks about the new book, he’s doing it solo, without his co-author at his side.

That’s because Phil Keith didn’t live to see the book’s publication. He died on March 10, 2021, at age 74, shortly after the manuscript was completed and submitted to the publisher.

Keith, a Harvard-educated historian and a former Navy aviator, had served three tours in Vietnam and earned a number of citations for his service. He had also done master’s work at the Naval War College and Long Island University, was a licensed U.S. Coast Guard captain and taught business courses at Long Island University’s Southampton College.

But his true passion was writing, and late in life, it was a calling that he pursued with total dedication. Keith’s longtime partner, Laura Lyons, recently recalled him as a risk taker and someone willing to reinvent himself. It was totally in character for him to change careers from a business professional to a writer.

Keith’s book was a suspense-filled thriller set in Montauk. While Lyons said his intention was to pen a series of books in a similar vein with titles in alphabetical order — “Belladonna,” “Chimera,” etc. — after she suggested that Keith enroll in Tom Clavin’s writing course, he agreed it was a good idea.

“I taught writing workshops at Fort Pond House in Montauk,” Clavin recalled in a recent interview. “They ran six to eight weeks, and Phil was an attendee. He took at least two of them. He was working on a novel at the time, which was good, but it’s not my cup of tea.

“But when I got to know him better and learned about his own experiences, particularly serving in Vietnam, I said he should consider looking for a topic for a nonfiction book,” Clavin added.

Keith did exactly that and before long came across a news story about an Army regiment that was ambushed by enemy forces in Vietnam in 1970 and had been overlooked for heroism for decades before finally being honored by President Barack Obama.

“It was written up in a New York Times article. I said, ‘Did you see that?’ He said, ‘Yes, I was thinking the same thing,’” Clavin recalled.

Keith’s book about the regiment and their heroism is detailed in “Blackhorse Riders,” which was published by St. Martin’s Press in 2012.

“It was not his personal story, but it was narrative nonfiction and there were many surviving members of that Army infantry group,” Clavin said. “The book came out and was well received.”

Keith followed up with another Vietnam-era book, “Fire Base Illingworth,” which was released by St. Martin’s Press in 2013, and “Stay the Rising Sun,” about the sinking of the USS Lexington during World War II, published in 2015 by Zenith Press.

“I knew he had made a name for himself in nonfiction,” Clavin said.

Then came “All Blood Runs Red.” The book, published in 2019, was the first that Clavin and Keith worked on together. It told the story of Eugene Bullard, the son of a former slave who had left his Georgia home at the age of 11 and found his way to Europe where he garnered fame, first as a boxer, and then as the first African American fighter pilot in history.

“It was supposed to be a one-off, but the book came out and was extremely well received. There was interest in the screen adaptation, and the publisher said, ‘Would you guys do another together?’” Clavin recalled. “We kicked the idea around. Phil was a Navy man and wanted to do a sea story. I had this Civil War sea battle in my file that no one had heard about.”

That story became “To the Uttermost Ends of the Earth,” and on Wednesday, May 11, at 1 p.m., Clavin will talk about the book and his friendship with Keith at Rogers Memorial Library in Southampton.

He explains that for both of the books he wrote with Keith, the process worked differently.

“It wasn’t like a formula we found,” Clavin said. “In ‘All Blood Runs Red,’ because of my other commitments, I came in after Phil had launched it. I said it should be ‘by Phil Keith with Tom Clavin,’ not ‘by Phil Keith and Tom Clavin.’ I was doing the rewriting, then Phil would do some revising. Phil did more of the research because he got a head start.”

In sitting down to work on “To the Uttermost Ends of the Earth,” Keith had a novel suggestion for his writing partner: “Why don’t we each take a captain and write from his point of view?”

“I said that would never work. If I had never done it, how could it possibly work?” Clavin laughed. “So I said, let’s go along with it.”

And to Clavin’s surprise, the method worked.

“People will be in the different ships,” Clavin said in describing how readers will experience the tale in the book. “The story will be told from the point of view of the Union and the Confederate point of view.”

For Clavin, finding a Civil War story that hadn’t been told was key to the project, and he noted that when it comes to Civil War battles at sea, most people only know of the Monitor and Merrimack, which faced off in the waters off Virginia.

“But these were full-fledged warships meeting off the coast of France in a knock-down, drag-out sea battle that no one knows about it,” Clavin said. “I thought it was something different and new. After Phil made the suggestion, we both liked the idea of getting to know the captain we had taken on. I was involved in Semmes and his career, same with Phil with Winslow. They were very different personalities.”

After completing the first draft of “To the Uttermost Ends of the Earth,” Clavin and Keith sent the book to their editor and had received some feedback on revisions and suggestions.

“My recollection is it was February or March, and we turned it back in. I thought, this is great, and I called Phil on a Friday to tell him something and I told him he didn’t sound good,” Clavin said, adding that Keith told him he was in the hospital. “He had some lingering Agent Orange issues, and when I called a couple days later, he sounded really bad.”

Because of COVID-19, no visitors were allowed.

“I was getting worried. He seemed in a freefall situation,” Clavin said. “On the morning of March 10, my phone rang at 6 a.m. It was Laura saying he was gone.”

“This is someone I had the good fortune to work with and a good friend. Suddenly, my co-author was not around,” Clavin said. “It was easy for us to talk and collaborate. Phil was always open to exchanging thoughts and ideas.

“Phil was also genuinely talented. I’m so glad in the latter part of his life he had the opportunity to be a full-time writer. Otherwise, it was a talent that would have gone unused,” he added. “When the book came out, I wish he had been able to see the write-up in the Wall Street Journal. He would’ve loved it.”

Tom Clavin, co-author with Phil Keith of “To the Uttermost Ends of the Earth: The Epic Hunt for the South’s Most Feared Ship — and the Greatest Sea Battle of the Civil War,” speaks about the book at Rogers Memorial Library, 91 Coopers Farm Road, Southampton, on Wednesday, May 11, at 1 p.m. To register, visit rogersmemorial.librarycalendar.com or call 631-283-0774 ext. 523.