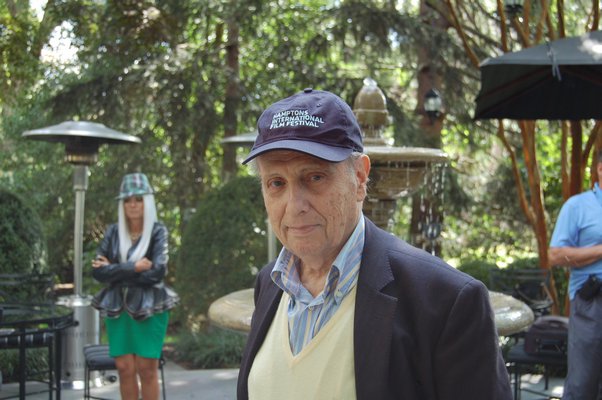 It seems a bit unfair to take a photo of Henri Dauman. The 85-year-old has photographed everyone from Jane Fonda to the Kennedy family, not to mention hundreds of other people ranging from Buddhist monks in Vietnam to civil rights protesters outside the White House. He’s captured the large scope of major American cultural events and the tiny personal moments of one’s everyday life. So the only person who could do justice to a photo of Henri Dauman is probably Henri Dauman. But a simple singular photograph at East Hampton’s 1770 House on a sunny Friday afternoon is one thing—imagine having to film an entire feature-length documentary about him?Mr. Dauman wasn’t far from his home in Hampton Bays while visiting the Hamptons International Film Festival last week to promote the world premiere of said documentary. “Henri Dauman: Looking Up” covers not only the photographer’s time snapping iconic moments in New York City since the 1950s, but also his traumatic past as an orphaned Holocaust survivor in France. Sporting gold-rimmed aviator sunglasses and a sharp blue blazer, Mr. Dauman had no trouble chatting about how he agreed to tell his story to director Peter Kenneth Jones at the behest of his granddaughter, Nicole Suerez, despite his usual attitudes.

“I always look forward rather than backward, and my story is not a happy story,” Mr. Dauman said. “I think I did this for the history, since that generation was direct witness to history. It was also for the memory. After my generation passes away there will be no direct witness to these incredible moments in history.”

When asked how he first came in touch with a camera, Mr. Dauman had to take things all the way back to his childhood in the early 1940s. He specifically cited three times when he narrowly escaped death: First, in 1942, when he and his mother escaped capture by French police who were ordered by the Nazis to roundup Jewish citizens and transport them to a Paris cycling stadium before being shipped to Auschwitz, then again while he was in hiding in the small commune of Limay when a small German airplane shot at him and missed. His third brush with death was much more tragic, as his mother bought a seemingly harmless bicarbonate that turned out to be rat poison. Mr. Dauman’s mother ingested the bicarbonate and died, leaving Mr. Dauman orphaned at 15 years old. But it was the orphanage where he spent his teenage years that got him a job processing amateur photographs and his first camera, a twin-lens Rolleiflex.

“That’s how I got my hands wet,” Mr. Dauman said. “I could cleanse my mind of the stuff on my shoulders. Every sunlight is a blessing.”

While growing up, Mr. Dauman said, he was always impressed by American culture and movies featuring the likes of Cary Grant and Esther Williams. They left such a mark that Mr. Dauman packed his bags at the age of 17 and moved to New York City to live with his uncles. From there on, he started working as a photographer for Life magazine and built his resume photographing cultural icons including artist Andy Warhol, designer Yves Saint-Laurent and musician Elvis Presley. Mr. Dauman said that he learned more about photography and the world around him the more he spent time around his various subjects, like the enigmatic Mr. Warhol.

“I photographed him enough to see that he’s a revolutionary who also dealt with the struggle to be an individual,” Mr. Dauman said. “I had to illustrate that. The job is to get people in a natural pose. The technical aspect of photography can be easily learned, the rest is how you talk and get to know a subject. How can I get to the root of my subject if I don’t know anything about them?”

He remembers one particularly striking moment to capture was the funeral procession for John F. Kennedy on November 22, 1963.

“He was an incredible guy who knew everyone by their first name,” Mr. Dauman said. “The funeral was a sad day for everyone. There was a terrible ambiance in the country.”

Whether it’s a goofy close-up of Peter Fonda and Dennis Hopper or the somber faces of JFK’s widow and brothers looking down at the road they marched on, Mr. Dauman said that he never forgot the vital element of photography: “Everything is human-to-human. It shows in the work.”